As Bilal Kayed enters his second month on hunger strike in Israeli prisons, events and actions were organized around the world on 8-15 July in a coordinated week of action organized by Samidoun Palestinian Prisoner Solidarity Network in support of Kayed’s struggle and that of fellow Palestinian prisoners, and in memory of Ghassan Kanafani, the Palestinian writer, artist and political leader and thinker assassinated on 8 July 1972 in Beirut.

The week of action also came as the Palestinian Prisoners’ Movement – representing all the Palestinian political parties inside Israeli jails – affirmed their support for Kayed and intention to escalate their protest steps within the prison, viewing Kayed’s struggle as the struggle of all Palestinian prisoners. Hundreds of Palestinian prisoners – mainly Kayed’s comrades in the leftist Popular Front for the Liberation of Palestine – are engaging in solidarity hunger strikes and protest actions inside the prison, demanding Kayed’s immediate release.

Kayed has been on hunger strike since 15 June in protest of his administrative detention – imprisonment without charge or trial – imposed upon him on 13 June 2016, at the expiration of his 14.5-year sentence in Israeli prisons. Held in isolation in Ashkelon prison, he is consuming only water and rejects salt and vitamin supplements and medical examinations. He is also refusing to speak with his jailers. His health has deteriorated significantly; he has lost a substantial amount of weight and suffers constant dizziness, fatigue and insomnia. He was transferred to hospital on 17 July. 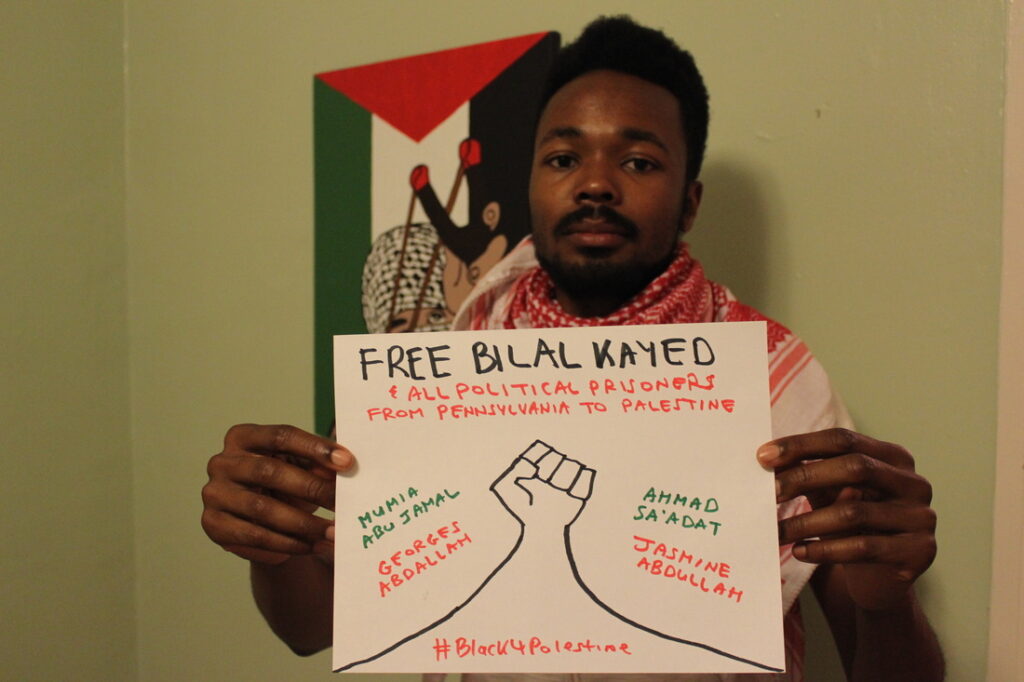 During the week of action, Black4Palestine, the Black movement for joint struggle and solidarity among the Black and Palestinian communities and liberation movements, issued an important statement in support of Bilal Kayed. Over 150 Palestinian and international organizations have joined in the call for Kayed’s release. 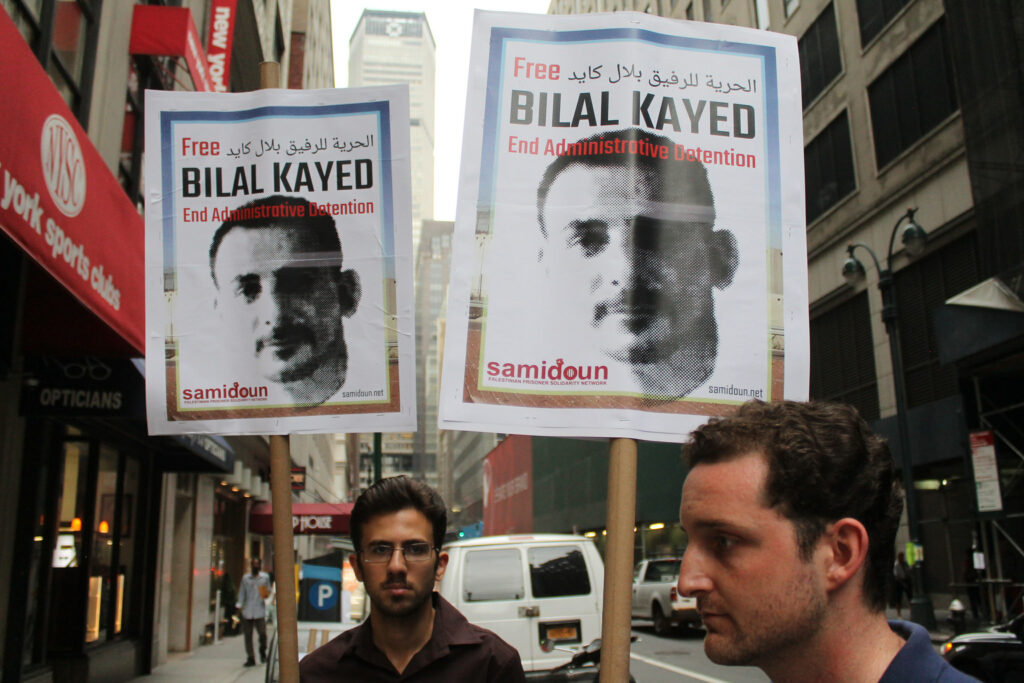 On 8 July in New York City, Samidoun activists gathered outside the offices of G4S in Manhattan to demand freedom for Bilal Kayed and an end to G4S’ profiteering from the imprisonment and oppression of Palestinians. Protesters carried signs and distributed literature and information demanding Kayed’s immediate release and denouncing the administrative detention policy, under which 750 Palestinians are held – out of a total of over 7,000 Palestinian prisoners in Israeli jails. G4S, the world’s largest security corporation, is a British-Danish multinational that contracts with the Israeli Prison Service to provide control rooms, equipment and security systems for Israeli prisons. It is subject to a global boycott call from Palestinian prisoners, civil society organizations and international groups for its profiteering from oppression, apartheid and imprisonment.

Coup Pour Coup 31, a French anti-imperialist collective, released a statement urging freedom for Kayed and recognizing the 44th anniversary of the assassination of Palestinian writer Ghassan Kanafani. “Israel has always waged a war without mercy against the Palestinian people. Killing the leaders of the resistance, as was the case with Ghassan Kanafani, or jailing and torturing them, as is the case today for Bilal Kayed.” 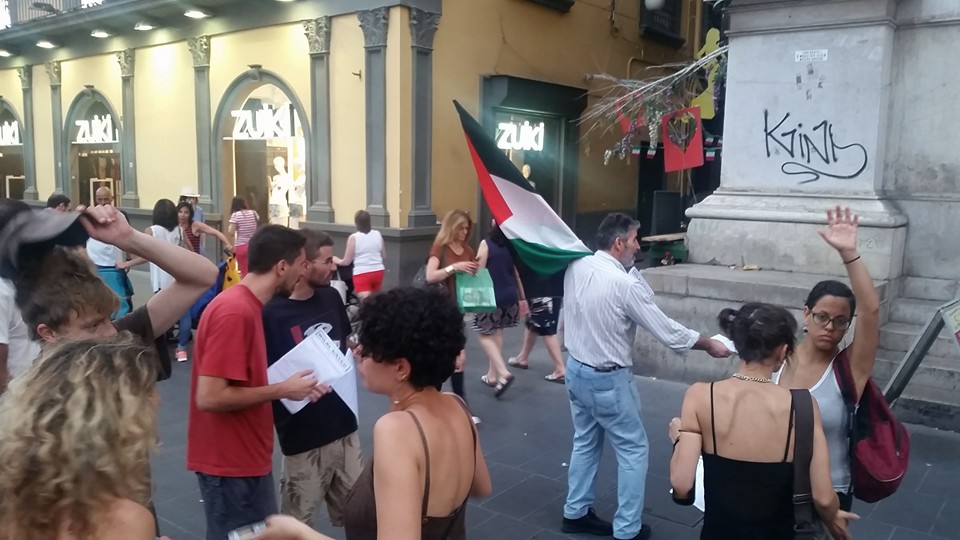 In Naples, Italy, activists with the Comitato di solidarietà con il popolo palestinese and the Comunità Palestinese Campania took the streets on Friday, 8 July to urge freedom for Kayed, carrying Palestinian flags and campaign posters and leaflets with information about Kayed’s case and administrative detention, distributing information and working to build a campaign for Kayed and his fellow Palestinian prisoners in Israeli jails. 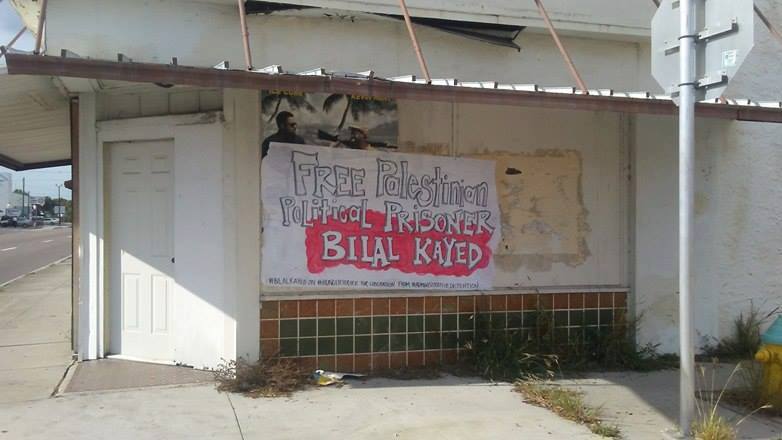 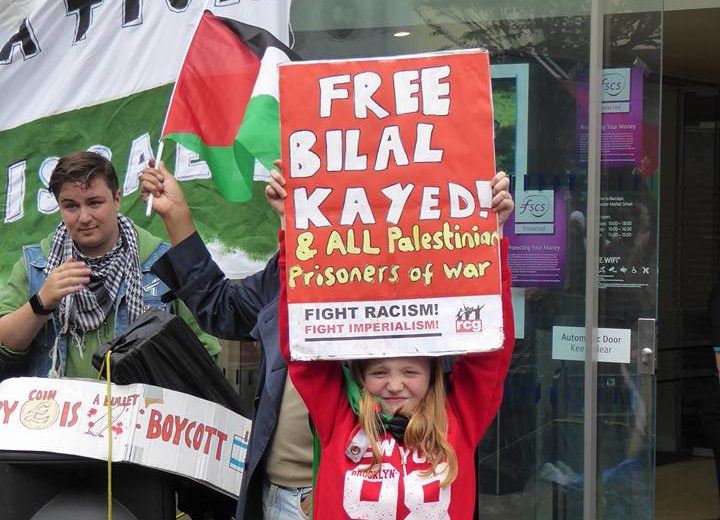 In Arklow, Ireland, socialist Irish republicans affiliated with eirigi gathered to demand freedom for Kayed and mark the 35th anniversary of the death of Joe McDonnell, an Irish republican political prisoner in British jails, in 1981. McDonnell joined the 1981 hunger strike just days after Bobby Sands gave his life in the H-Blocks. After 61 days on the strike, the 29 year old volunteer became the 5th hunger striker to die. They emphasized the importance of boycotting Israeli goods and supporting the prisoners’ struggle.

In London, at a rally of the Palestine Solidarity Campaign demanding an end to the siege on Gaza on the second anniversary of Israel’s 2014 attack, speakers highlighted the cause of Palestinian prisoners and Kayed’s case.

A new issue of the Arabic-language literary magazine Al-Adab was issued on 9 July, dedicated to freedom for Bilal Kayed and imprisoned Lebanese struggler for Palestine Georges Ibrahim Abdallah. Among the pieces in the new issue is a prose writing by Mohammed Khatib of Samidoun Europe, reflecting the thoughts of a Palestinian refugee on Kayed’s case and the Palestinian situation today. 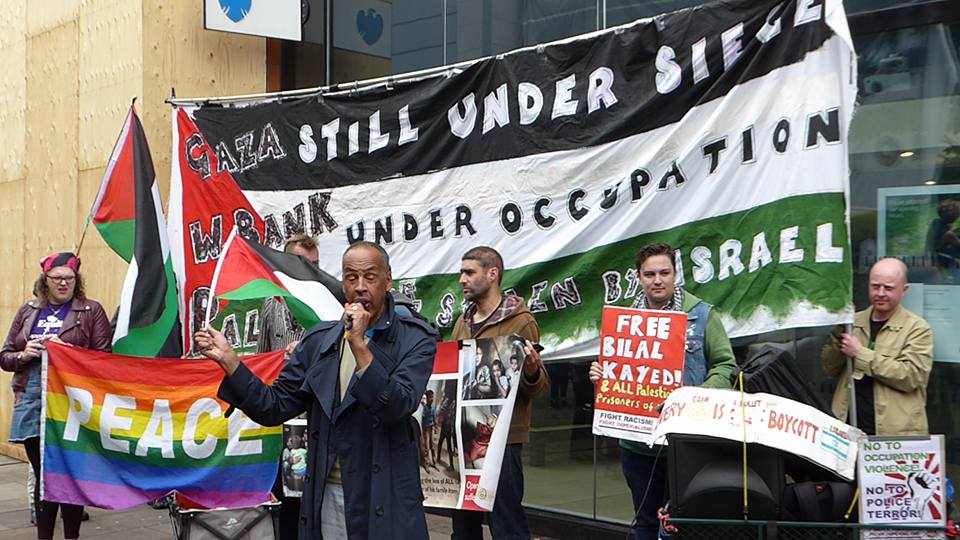 On Saturday, 9 July, protesters in Manchester, including Fight Racism! Fight Imperialism! (FRFI) Manchester and RCG – Revolutionary Communist Group, marched to commemorate the second anniversary of the 2014 Israeli attack on Gaza, demanding justice for Gaza and all of Palestine, and freedom for Bilal Kayed and his fellow 7,000 Palestinian political prisoners in Israeli jails. Participants occupied a Barclays Bank branch in Manchester over the bank’s investment in the Israeli arms trade, including Elbit Systems. 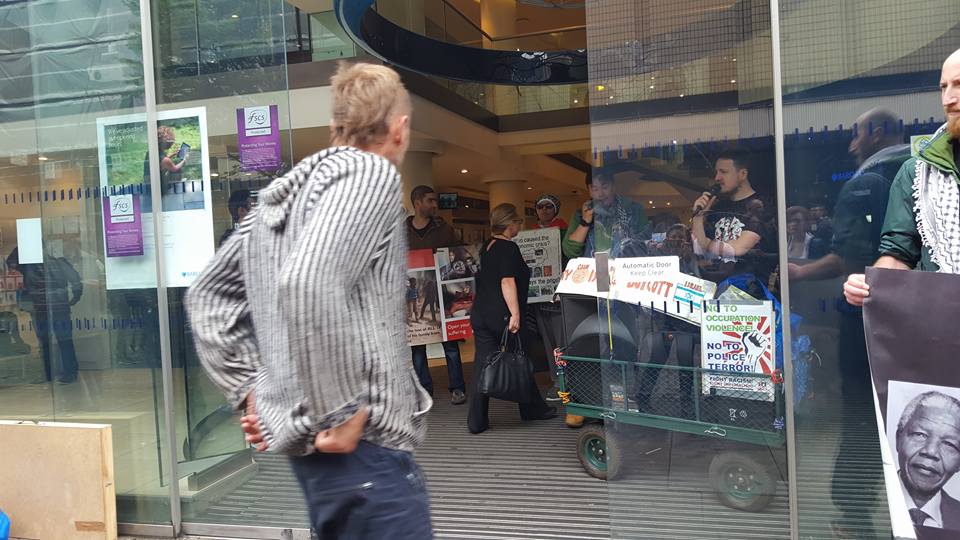 On the same day, eirigi republican socialists in Enniscorthy, Wexford, Ireland, gathered to protest outside the offices of TD Paul Kehoe, Irish Minister for Defence, protesting his participation in a NATO conference and the Irish government’s continuing arms deals with the Israeli state. The Irish republican socialists expressed their solidarity with Palestinian prisoners, posting photos of Kayed on the windows of Kehoe’s office. 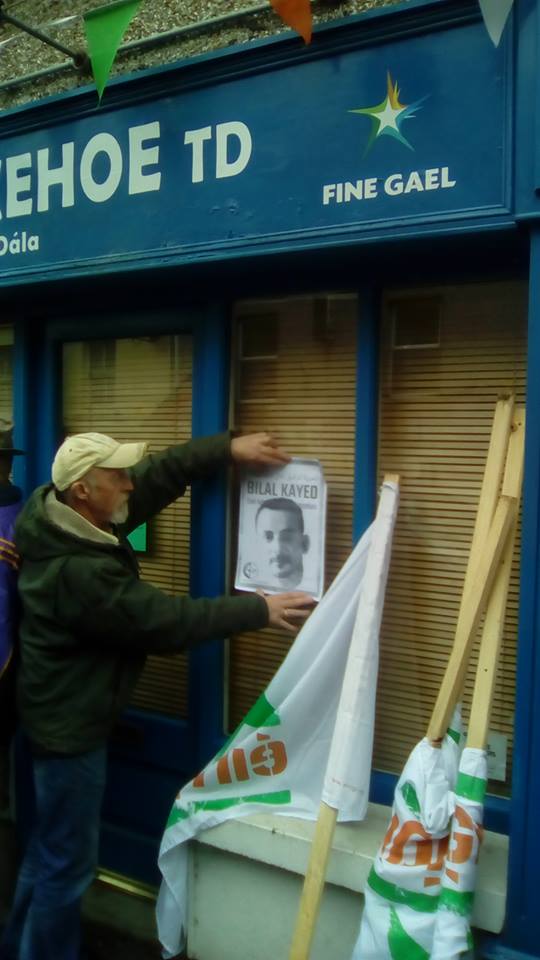 Italian activists launched a “relay fast” for Kayed organized online throughout the week of action, from 9-16 July, with participants engaging in daily hunger strikes, sharing information, and advocating to demand Kayed’s freedom. 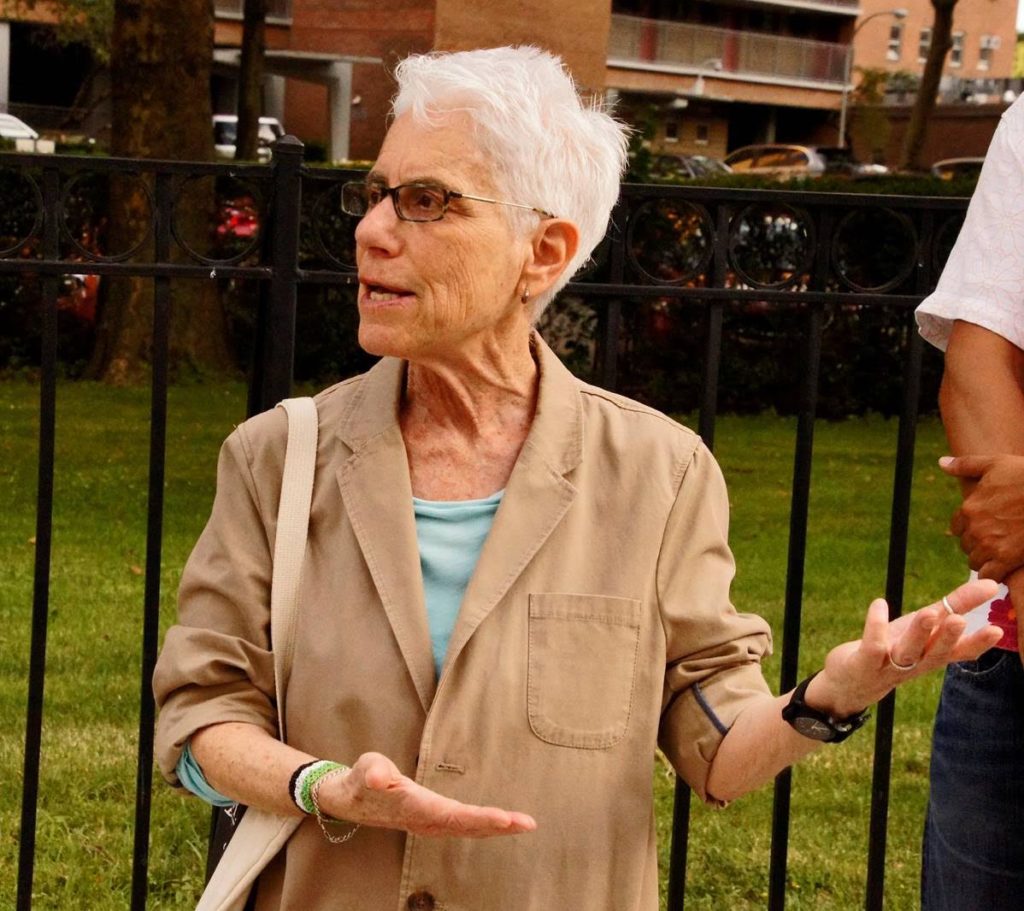 Former US-held political prisoner Laura Whitehorn spoke on Monday, 11 July in New York City at a vigil across from the Metropolitan Correctional Center in Manhattan, focusing on the struggle of Palestinian political prisoners and the case of Bilal Kayed. The vigil, organized by No Separate Justice: A Post-911 Domestic Human Rights Campaign, highlights state repression, imprisonment, and surveillance in so-called “War on Terror” cases. Whitehorn, a participant in the Anti-Prison, Labor and Academic Delegation to Palestine earlier this year, urged people to support Bilal Kayed in his hunger strike protesting the imposition of administrative detention.

In Berlin, Germany, on 13 July, the Democratic Palestine Committees met with the German Foreign Ministry, delivering a letter on behalf of Palestinians in Berlin urging action on the case of Bilal Kayed and the issue of administrative detention. They also held a protest outside the office of the Foreign Ministry. This was the second protest in Berlin demanding freedom for Kayed, and Palestinians in Berlin are preparing further actions to advocate for his release. 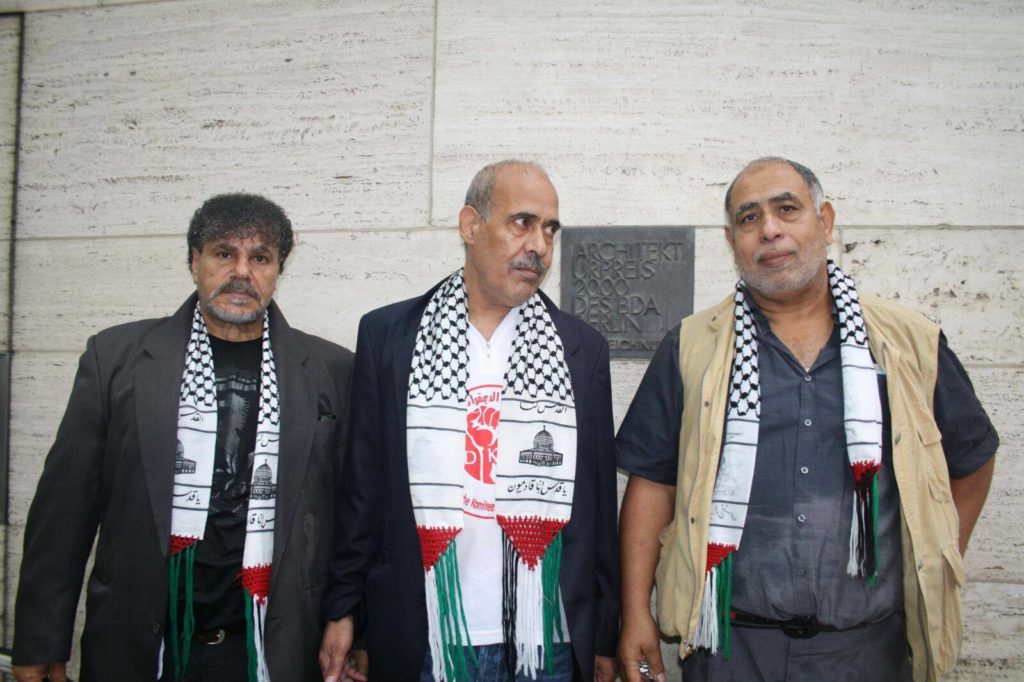 On Thursday, 14 July, Kayed’s 30th day of hunger strike,  protesters gathered outside the Pine Residence in Beirut, the home of the French Ambassador to Lebanon, on the French National Day to demand freedom for Lebanese Arab struggler for Palestine, Georges Ibrahim Abdallah, imprisoned in French prisons for 32 years. They connected Abdallah’s case to that of the over 7,000 Palestinian prisoners in Israeli jails, especially Kayed’s case. 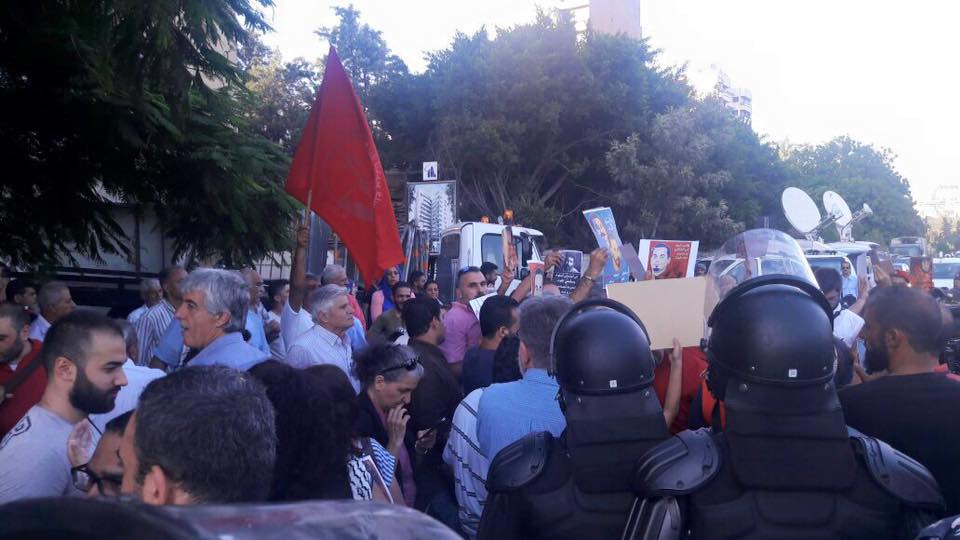 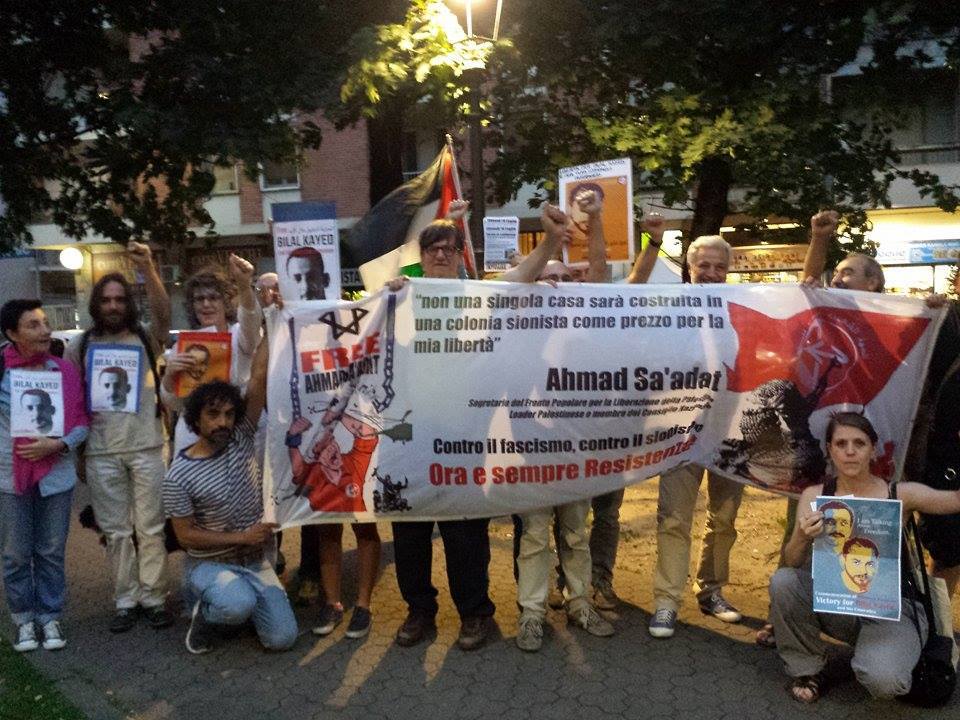 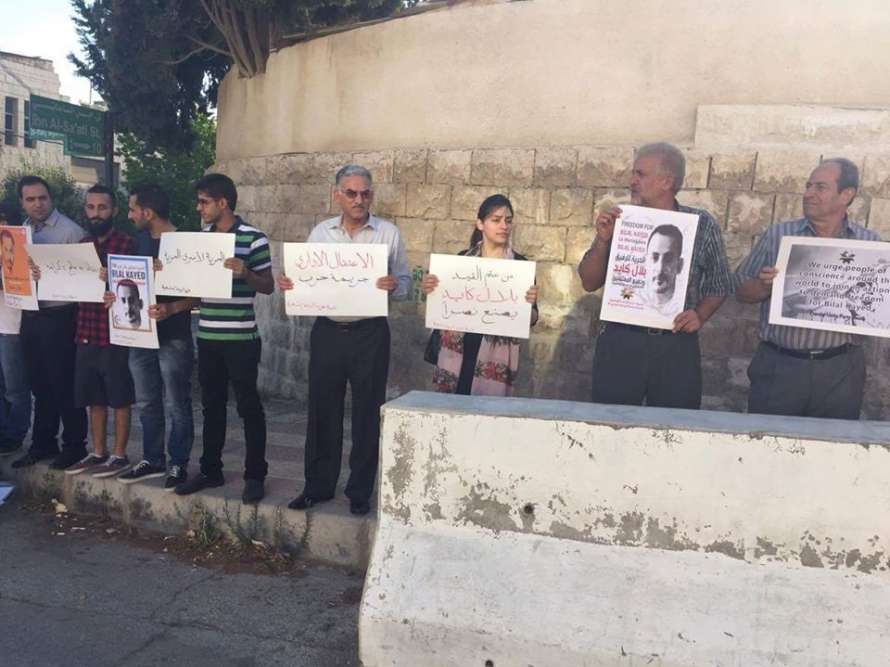 Thursday, 14 July also saw a large online action, or “Twitterstorm,” organized by Addameer Prisoner Support and Human Righrs Association, in which activists and organizers from Palestine and around the world highlighted the case of Bilal Kayed in thousands of tweets with the hashtag #freedom4bilal. 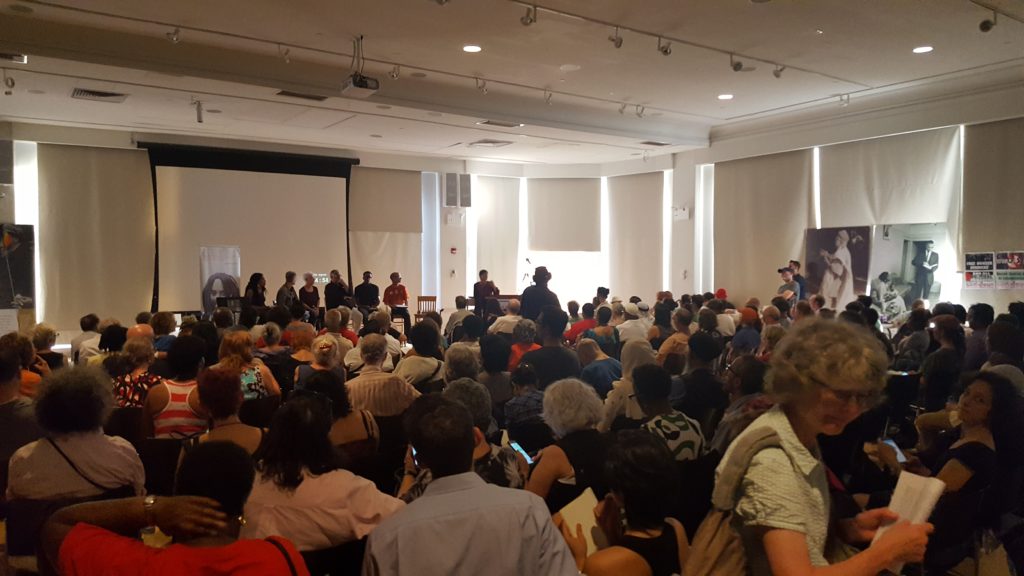 These events were organized alongside demonstrations throughout occupied Palestine, including a protest in Haifa on 14 July joined in by a broad alliance of Palestinian organizations in the city; a mass march in Gaza , led by Palestinian children, on 13 July, demanding Kayed’s freedom; marches in Nablus city and in Asira al-Shamaliya, Kayed’s hometown, and the creation of a solidarity tent; the erecting of a solidarity tent in Dheisheh refugee camp near Bethlehem;  and a vigil in El-Bireh outside the offices of the International Committee of the Red Cross. These actions follow an earlier set of international actions on 24-25 June, and ongoing events and protests in Amsterdam, The Hague, Brussels, Turin, Toulouse, Paris, Toronto, Dublin, Belfast, and elsewhere demanding freedom for Kayed.

On 8-15 July, the struggle of Bilal Kayed was supported around the world as he entered his second month of hunger strike. Now, as Bilal is imprisoned and dozens of prisoners have joined him in open hunger strike – with hundreds more in ongoing protest actions – it is time for an international escalation of struggle, to take to the streets and raise our voices in support of this critical battle for freedom. The Progressive Student Labor Front in Palestine has already called for an international day of student action on 25 July. We urge all international supporters of justice and liberation for the Palestinian people to meet the prisoners’ sacrifice with struggle: organize protests, actions and demonstrations, and escalate BDS campaigns and the boycott of Israel and complicit corporations like G4S, to demand freedom for Bilal Kayed and his fellow Palestinian prisoners.

INTERNATIONAL SUPPORTERS OF THE CAMPAIGN TO FREE BILAL KAYED

Over 150 organizations signed on to the previous call to action to free Bilal Kayed! See the list of organizations below. Events were organized in Berlin, Paris, Brussels, New York, London, Dublin, Belfast, Galway, Amsterdam, The Hague, Toulouse, Torino, Milan, Vancouver and more. Participating organizations have made the call to action about this case available in: French | German | Greek | Italian | Spanish | Turkish | Czech | Dutch Join in!