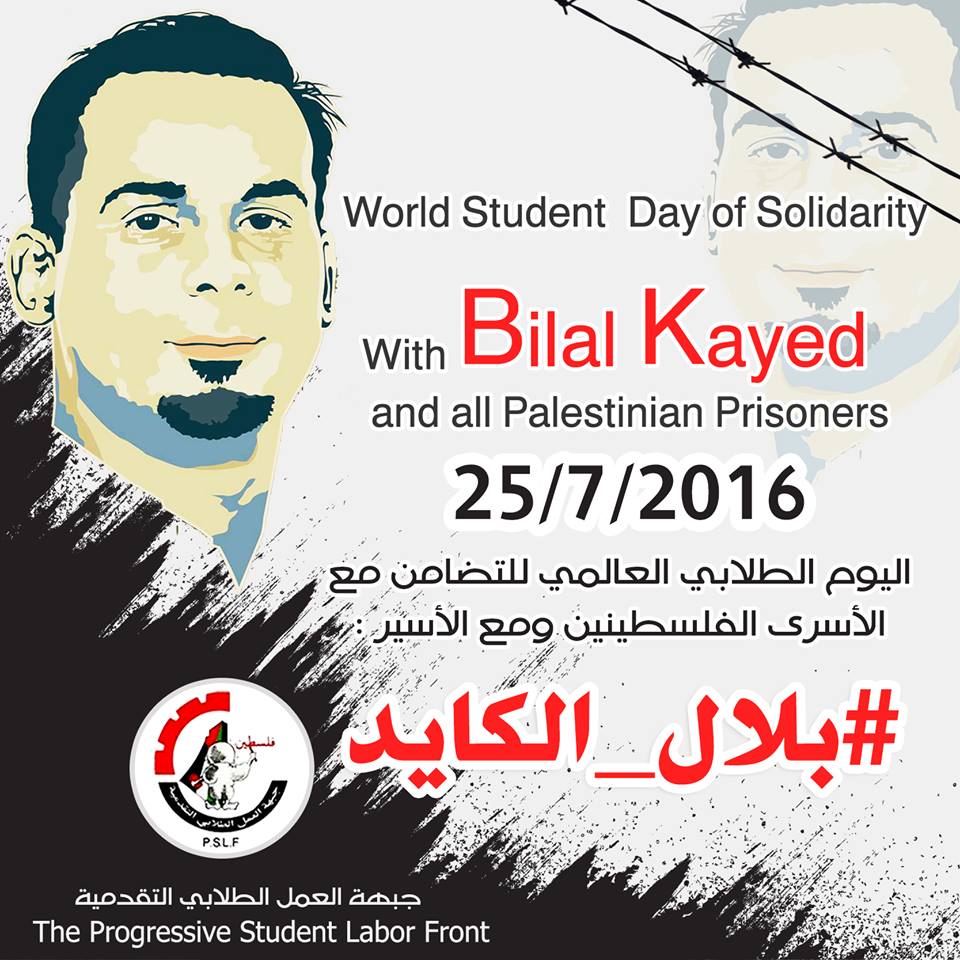 Palestinian prisoner Bilal Kayed is now on his 41st day of hunger strike against his administrative detention without charge or trial. Approximately 65 Palestinian prisoners are now engaged in a collective open hunger strike demanding his freedom, after the entrance of a new group of strikers into the collective battle on Sunday, Kayed’s 40th day of hunger strike. Hundreds of prisoners, all of the members of the Popular Front for the Liberation of Palestine, Kayed’s leftist party, are engaged in a two-day strike today and tomorrow, demanding Kayed’s freedom.

Addameer Prisoner Support and Human Rights Association lawyer Farah Bayadsi visited Kayed in Barzilai Hospital yesterday, where he is surrounded by three jailers. He continues to refuse any supplements or medical tests, and consume only water; his health condition is deteriorating. Despite his weakness, he is shackled by the right hand and left foot to his hospital bed on a constant basis. Kayed is suffering from severe throat, head, and eye pain, and experienced a two-hour period in which he could not see. He is extremely exhausted and feels aches throughout his body.

He has come under severe pressure to end his strike as well as to accept several medical tests, including on his brain and eyes. He has refused all such medical tests. The director of Ashkelon prison visited him and demanded he end his strike in order to “calm the situation” in the prisons; Kayed rejected this demand and announced that his strike will continue until he wins his freedom.

He received a visit from the representative of the International Committee of the Red Cross, but refused to allow the visit to take place while he was shackled. Following this, he was unshackled for the visit and then re-shackled immediately following the departure of the ICRC representative.

Kayed, 34, launched his hunger strike on 15 June after he was ordered to six months in administrative detention without charge or trial following the expiration of his 14.5-year sentence in Israeli prisons. With the support of his comrades and the broad Palestinian prisoners’ movement, his strike is supported with dozens of fellow strikers, partial strikes by hundreds of prisoners, and other protests inside the prisons. His case is seen as threatening a dangerous precedent of indefinite imprisonment of Palestinian prisoners who complete their sentences. On the 40th day of his strike, protests continued for his release, including marches and sit-ins in Rafah, Nablus, Ramallah, and Ara village. 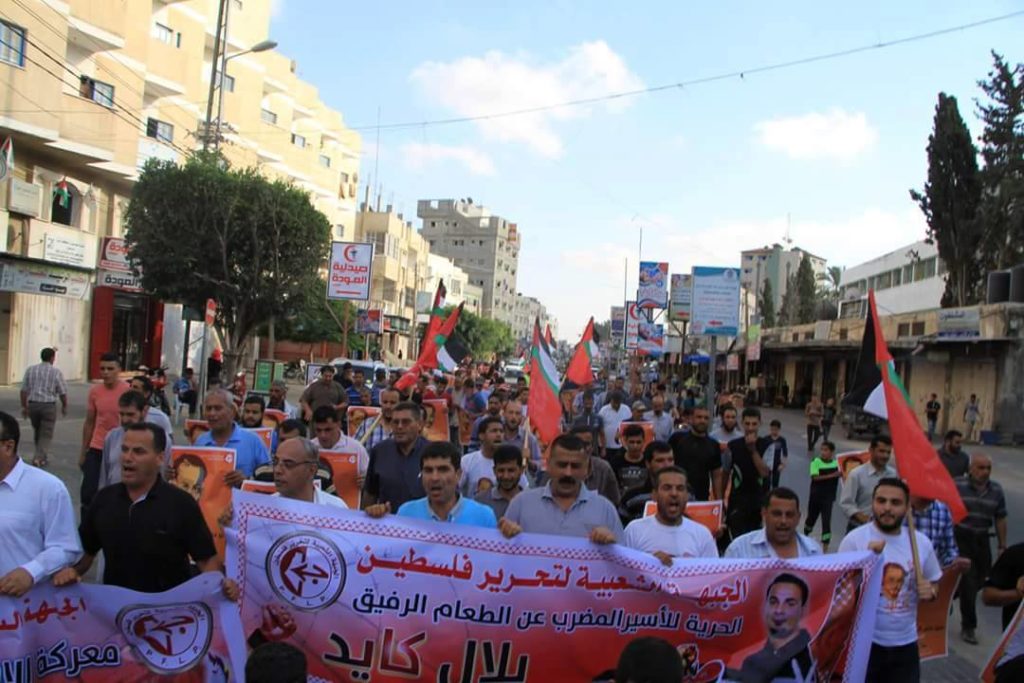 25 July also marks the World Student Day of Solidarity, called by the Progressive Student Labor Front, as well as the ongoing global days of solidarity with Kayed from 20-30 July. Protests for the Student Day of Solidarity will take place throughout Palestine, as well as in New York City, organized by New York City Students for Justice in Palestine. They will protest in front of the Israeli consulate to demand freedom; their protest is threatened with racist attacks by the extremist, so-called “Jewish Defense League.” 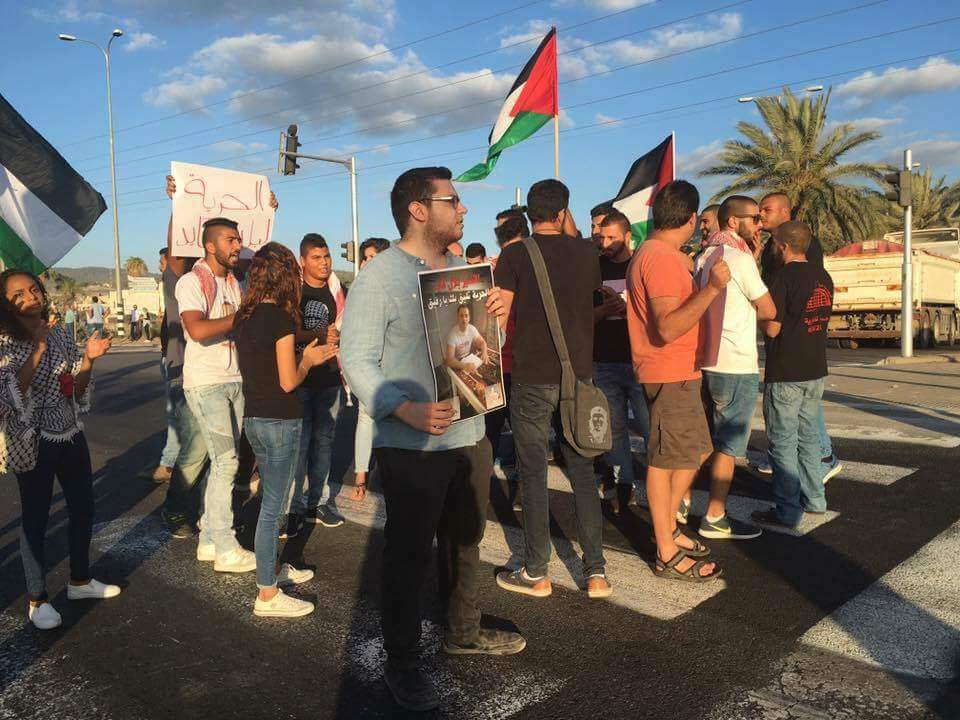 The General Union of Tunisian Students has urged wide participation in the day of action, and the Karama Party students in Egypt will hold an event in Cairo in support of Kayed’s strike. Events will also take place in Alexandria in support of Kayed. The Iraqi Communist Party – Left issued a statement in support of the prisoners and noted that their affiliated students would hold events in solidarity with Bilal Kayed. The youth and students of the Democratic Way in Morocco also announced that they will participate in the day of action. The Wihda Party Youth of Jordan announced that it will launch a schedule of events continuing their ongoing youth actions in support of Kayed.