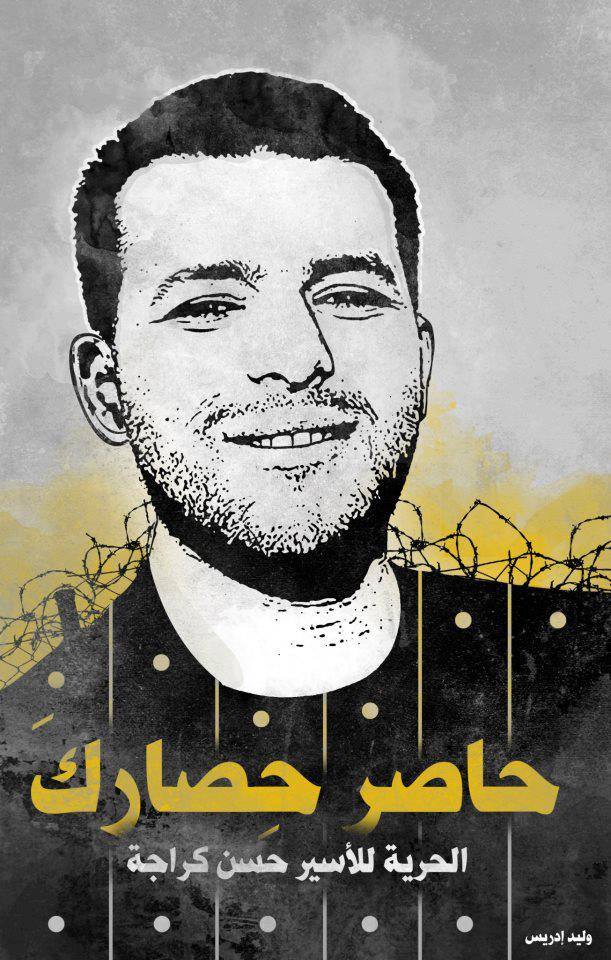 Palestinian youth activist and organizer, human rights defender, and former prisoner Hassan Karajah was ordered to six months’ administrative detention, imprisonment without charge or trial, at the Israeli Ofer military court on Sunday evening, 17 July 2016. The military court had earlier set a hearing on the extension of his detention. Muhannad Karajah, lawyer with Addameer Prisoner Support and Human Rights Association, said that “We were surprised to see the order to administrative detention imposed suddenly, denying his family the ability to see him and cancelling the hearing set yesterday.”

Thameena Husary, Karajah’s wife, said that this action by the Israeli occupation was a deliberate act targeting Palestinian families, saying that they had only been married for five months prior to Karajah’s arrest on 12 July at Beit Ur al-Fuqua checkpoint.

Muhannad Karajah told Samidoun that “the arrest of the activist Hassan Karajah and the issuance of an administrative detention order against him coincides with the hunger strike of the prisoner Bilal Kayed. The occupying power continues to violate international law and the rights of Palestinian prisoners…in an attempt to reject the pressure of the popular solidarity movement with the struggling prisoners and administrative detainees, especially Bilal Kayed. This also must put the Palestinian Authority in front of its responsibilities to the Palestinian prisoners in international forums.”

He further noted that the arrest and imprisonment of Hassan Karajah comes in the context of the repression of Palestinian youth activists and the declaration by Israeli Interior Minister Avigdor Lieberman that the Youth Movement (Herak Shababi), a Palestinian youth campaign in occupied Palestine, is now a “prohibited organization,” alongside most Palestinian political parties. Karajah was active in the work of Herak Shababi in 2011 in their organizing against Palestinian division.

While administrative detention orders are based on secret evidence not available to either the accused or their lawyers, the Israeli military occupation prosecution alleged that Karajah was a “threat to the security of the state,” referring to his involvement with the “prohibited organization” Herak Shababi and alleging that he is involved with the Palestinian leftist party, the Popular Front for the Liberation of Palestine.

Karajah, well known for his work in a number of civil society organizations, including the Stop the Wall Campaign and the Partnership for Development Project, and his advocacy for boycott, divestment, and sanctions (BDS) against Israel, was the subject of an international campaign for his release, which highlighted the Israeli targeting of Palestinian human rights defenders.

A letter Karajah wrote from prison was widely distributed: “Here, we draw our energy to continue from you. We, the newly detained prisoners, our hearts are full of happiness when, while being transported from prisons to court, we meet prisoners we have heard about for decades, whose photos and posters we have carried in the streets, prisoners from whom we learned our readiness to struggle since childhood.

I say to you at the end of this message – I will see you soon. I will come out as you have known me and better, and I will greet you with the single word, ‘Freedom.’”

Samidoun Palestinian Prisoner Solidarity Network reiterates its call for the immediate release of Hassan Karajah and all Palestinian prisoners and pledges to work to build an international campaign around Hassan’s case and that of fellow youth activists targeted for repression and imprisonment.