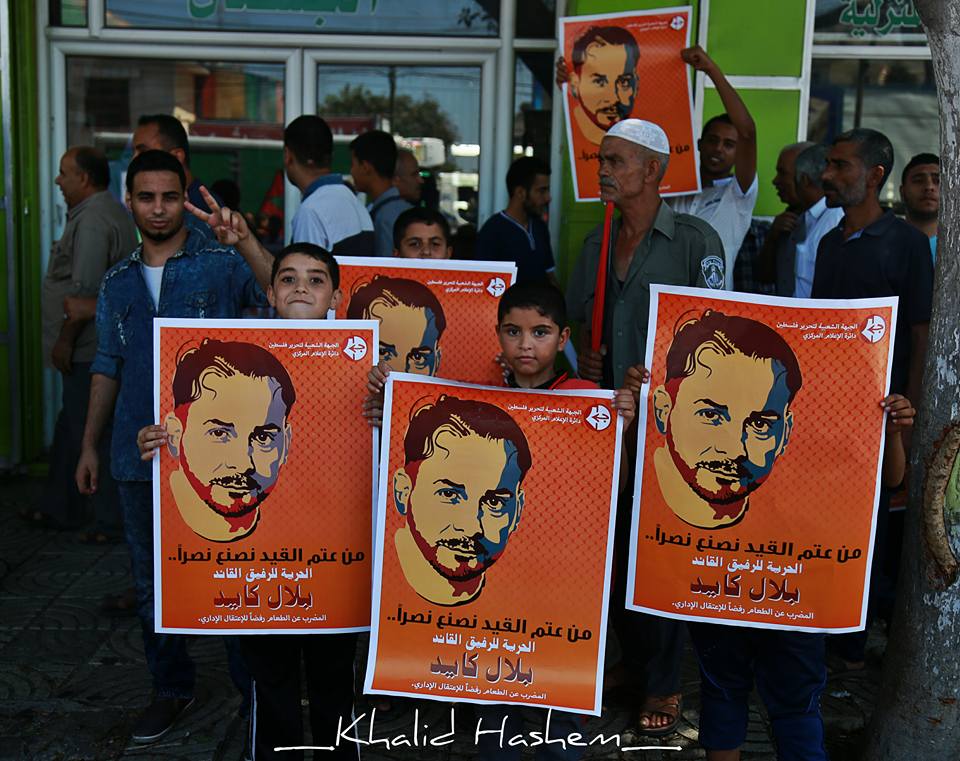 Held in solitary confinement, he launched a hunger strike on 15 June. Hundreds of prisoners from the Popular Front for the Liberation of Palestine, Kayed’s leftist party, have been engaged in a series of hunger strikes and protest actions in support of his demand for freedom. The Palestinian Prisoners’ Movement, comprising all major Palestinian political parties in Israeli jails, has also pledged full support and involvement in protest actions to demand Kayed’s freedom. His case is seen as threatening a dangerous precedent of indefinite imprisonment of Palestinian prisoners upon the expiration of lengthy sentences.

After a sharp deterioration in his health, he was transferred from isolation in Ashkelon prison to Barzilai Hospital as dozens of Palestinian prisoners launched an open collective hunger strike – scheduled to grow on an ongoing basis – demanding Kayed’s freedom. Kayed’s lawyer, Farah Bayadsi of Addameer Prisoner Support and Human Rights Association, reported that Kayed is under intense security at the hospital, shackled hand and foot to his hospital bed, and being subjected to ongoing and repeated pressure to end his strike. Kayed is continuing his strike, consuming only water and rejecting all supplements and refusing medical examinations. He has declared that he will continue his strike “until the end.”

Israeli repression has escalated in order to quash the growing hunger strike: PFLP leaders, including Nidal Daghlas and Kamil Abu Hanish have been isolated, with Abu Hanish transferred from Ramon to Gilboa prison. Prominent Palestinian national leader Marwan Barghouthi was transferred from Gilboa prison to collective isolation in Hadarim prison also on 17 July, prevented from communicating with prisoners outside the isolation wing. The imprisoned brothers, Mohammed and Mahmoud Al-Balboul, are on their 14th day of hunger strike; both are held under administrative detention without charge or trial and are demanding their release.  Their imprisoned 15-year-old sister Nuran was freed earlier this week after three months of imprisonment.

Three more Palestinian prisoners held under administrative detention in Ofer prison without charge or trial announced an open hunger strike against their detention on Sunday, 17 July. The three: Ayad Herama, detained since December 2013; Muhannad Mutahna, detained since December 2013; and Malek al-Kadhi, detained since May 2016 – are demanding their freedom. They, the Balboul brothers and Kayed are among nearly 750 Palestinians held without charge or trial under indefinitely-renewable administrative detention orders, issued on the basis of secret evidence.

Attia Bassiouni of the National and Islamic Forces in Gaza said on 18 July that the prisoners’ protest for freedom for Kayed will grow on Tuesday, as sections will close and prisoners will refuse to participate in roll  Prisoners across political lines will return their meals and demand freedom for Kayed and an end to the policy of administrative detention.

Protests are taking place throughout Palestine and internationally to free Kayed, including planned demonstrations in Ramallah and Jerusalem on Tuesday, 19 July. Over 150 international and Palestinian organizations have joined the call for Kayed’s freedom. Samidoun Palestinian Prisoner Solidarity Network is calling for urgent actions between 20 and 30 July internationally to free Kayed, including participation in the World Student Day of Action for Kayed, called by the Progressive Student Labor Front in Palestine.