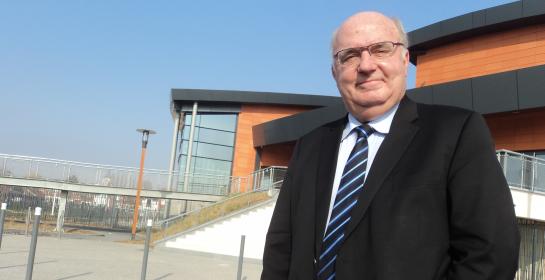 Alain Bocquet, member of the French National Assembly and deputy mayor of the town of Saint-Amand-des-Eaux, issued a letter to French Foreign Affairs Minister Jean-March Ayrault on Wednesday, 3 August, urging official French intervention to demand the release of Bilal Kayed on his 50th day of hunger strike.

Bocquet, who represents the French Communist Party, issued the letter after receiving a statement from the Association France Palestine Solidarite Nord-Pas-de-Calais urging action on Kayed’s case.

Kayed, 35, has been on hunger strike since 15 June, when he was ordered to an indefinitely-renewable six-month term in administrative detention after completing his 14.5 year sentence in Israeli jails. Today, he faces serious health deterioration and is shackled hand and foot to his hospital bed. He is joined by over 100 fellow Palestinian prisoners on hunger strike demanding his freedom; his case is a dangerous precedent of the continued indefinite detention of all Palestinian prisoners following the completion of their sentences. Today, Georges Ibrahim Abdallah, Lebanese Arab struggler for Palestine imprisoned for 32 years in French jails, announced that he is refusing meal trays for three days in solidarity with Kayed.

The text of the letter follows:
Dear Minister,

I write to direct your attention to the recent statement to you addressed from the Association France Palestine Solidarite Nord-Pas-de-Calais, in relation to the case of Bilal Kayed, Palestinian prisoner on hunger strike for 50 days.

As the Association points out, the movement led by Bilal Kayed that has been joined by other prisoners is related to his placement in administrative detention when he should have been freed after serving his sentence.

Thank you in advance for your intervention and request to the Israeli authorities that he is liberated, as are the other prisoners in administrative detention, held without charge or trial.

Please do accept, Monsieur Minister, the assurance of my highest consideration.