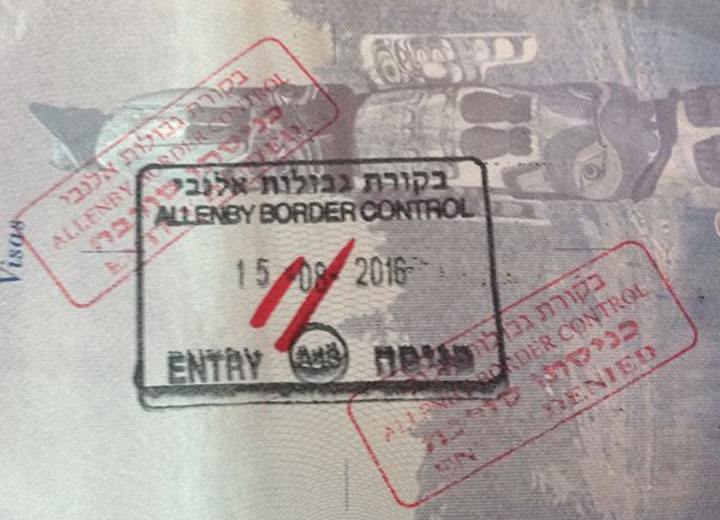 Samidoun Palestinian Prisoner Solidarity Network international coordinator Charlotte Kates was denied entry to Palestine at the King Hussein Bridge crossing from Jordan to occupied Palestine on Monday, 15 August, as she attempted to join a delegation of European parliamentarians and lawyers in support of Bilal Kayed and the Palestinian prisoners. Kayed, 34, has been on hunger strike for 69 days against his administrative detention without charge or trial; nearly 100 fellow prisoners have joined his strike against his imprisonment, imposed upon him immediately following his completion of a 14.5-year sentence in Israeli prisons.

When Kates presented her U.S. passport at the passport control line, it was taken from her and she was told to wait for further questioning. Along with multiple other travelers to Palestine and, especially, Palestinians holding international passports as well as those holding PA passports, she waited for hours at the bridge for a period interspersed with interrogations about her purpose in the country and participation in Palestine prisoner solidarity and BDS activism.

“I was asked about the websites I maintain, asked to allow the interrogator to access my email conversation with others, and asked to write up lists of names of people I know in Lebanon and in Palestine and lists of organizations with which I work. The interrogator attempted to look through my phone to find my contacts and to seek out WhatsApp chats and repeatedly demanded that I log in to my email or social media accounts and allow her access. As my phone was completely clear of any contact information and I refused to access any accounts or provide lists of names, this became a ‘reason’ to deny me entry. However, other travelers at the bridge were also subject to these searches and questioned about their personal photos and WhatsApp chats. In particular, people were questioned about wearing hijab in photos or being in contact with visibly Arab or Muslim friends,” said Kates.

“I was interrogated about my involvement with Samidoun and organizing around Palestinian political prisoners, and whether my visit to Palestine had anything to do with Bilal Kayed in particular, clearly a matter of concern to the Israeli interrogator,” said Kates. “Furthermore, in light of the recent announcements regarding ‘crackdowns’ on BDS activists entering Palestine, I was specifically interrogated regarding speeches and lectures I have given regarding boycott, divestment and sanctions against Israel, support for the BDS call and involvement with Israeli Apartheid Week.”

“This was not about personally targeting me; it was an attempt to target the growing international solidarity movement to support Palestinian prisoners and the Palestinian people’s liberation struggle, and an attempt to further isolate Palestinian prisoners from the people of the world,” Kates said. “Furthermore, my experience of prolonged interrogation and being held for hours at the bridge pales next to the experience of Palestinians being denied their basic right to enter their own homeland – part and parcel of the denial of the fundamental right of return – and subject to harsh interrogation, being deported for carrying international passports, and being subjected to cruel and degrading treatment at the border.”

“During just my own time at the bridge, I encountered numerous Palestinians facing enormous delays and aggressive interrogation, Palestinians denied entry to their own homeland, and Palestinians presented with ‘limited-access’ entry permits prohibiting them from visiting Jerusalem. I encountered a family from Gaza who had one of the rare permits to exit via Erez/Beit Hanoun and then the bridge to Jordan to see family members. As they had studied in the US and UK, they were questioned by border guards as to why they wished to return to Gaza at all, rather than staying in another country. Border control and interrogation is part and parcel of the system of Israeli colonization and dispossession separating Palestinians from their land and seeking to force even more Palestinians outside their homeland. It is part of the same system that denies millions of Palestinians their right to return and attempts to continue the Nakba on an ongoing basis,” said Kates.

“At the same time, I also witnessed numerous holders of international passports singled out for their names, visibly Muslim or Arab appearance, or travels to Arab countries, and subject to degrading and offensive interrogations regarding their religion and personal relationships,” Kates noted.

Following her denial of entry, Kates returned to Amman, where she visited a tent of solidarity with Kayed established in the courtyard of the Popular Democratic Unity Party (Wihda Party) of Jordan, where several activists are engaged in rolling hunger strikes in support of Kayed. She spoke about the international movement in solidarity with the prisoners and the Palestinian people as a whole, and listened to Palestinian and Jordanian organizers speaking about the struggle in Jordan; Samidoun and the Wihda Youth activists made new plans for joint activities and actions in the coming days, weeks and months. 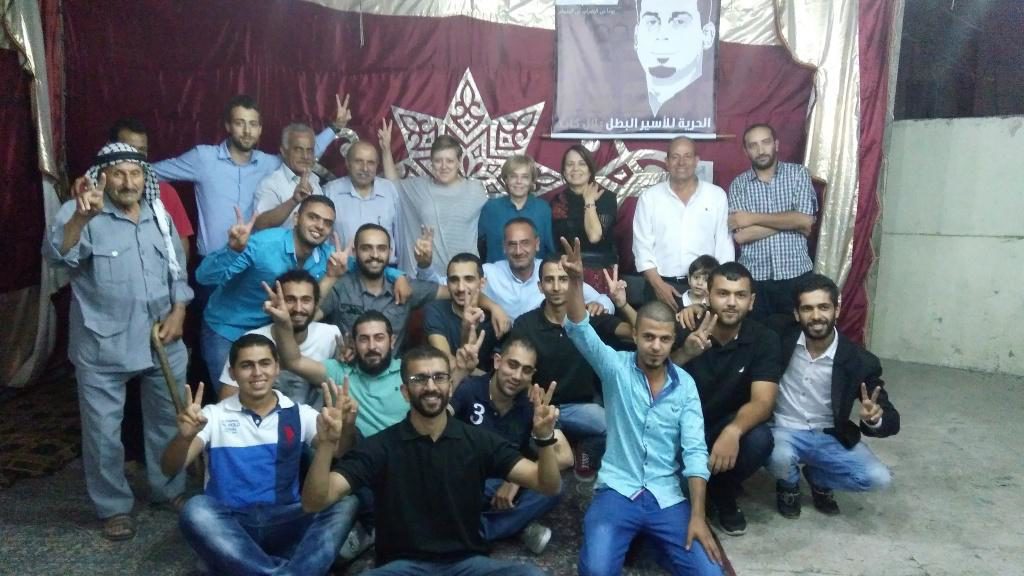 Numerous international activists and travelers and Palestinians holding international passports, regardless of their political involvement or lack thereof, have been detained at both the bridge and at Ben-Gurion airport, subject to intrusive and abusive interrogations and denied entry or deported from Palestine. The systematic practice of denial of entry clearly targets Palestinian, Arab and Muslim international citizens, including US, UK, European, Japanese and other citizens eligible for visa waiver or immediate visa on arrival, on the basis of their national origin, ethnicity and religion or perceived religious identity.

In early August, the Israeli government, through interior minister Aryeh Deri and security minister Gilad Erdan, announced that the state was creating a “task force” charged with identifying, deporting or denying entry to international citizens who participate in boycott, divestment and sanctions (BDS) campaigns, in response to the Palestinian call for international BDS against Israel. Kates was explicitly and repeatedly interrogated about her public involvement in BDS organizing, in addition to demands for lists of names and organizations involved in BDS campaigns.

As noted by Abdulrahman Abunahel of the Palestinian BDS National Committee regarding the “task force,” “This latest weapon in the intensifying Israeli legal, espionage and propaganda war against the BDS movement for Palestinian rights is a strong indicator of how desperate and irrational Israel’s regime of occupation, settler-colonialism and apartheid has become in its futile attempts to hinder the impressive growth of the BDS movement around the world.”

Samidoun Palestinian Prisoner Solidarity Network views this incident as an attempt to undermine international solidarity with Bilal Kayed at a time of critical importance for Kayed personally and for the Palestinian prisoners collectively. Denial of entry and deportation were unable to prevent the delegation from moving forward and working to build solidarity and support for Bilal Kayed, and is not able to stop the growing international protest against Israeli racism, oppression, imprisonment and settler colonialism. We urge increased delegations to occupied Palestine in support of Kayed and all Palestinian prisoners, and in support of the Palestinian people’s struggle for liberation.