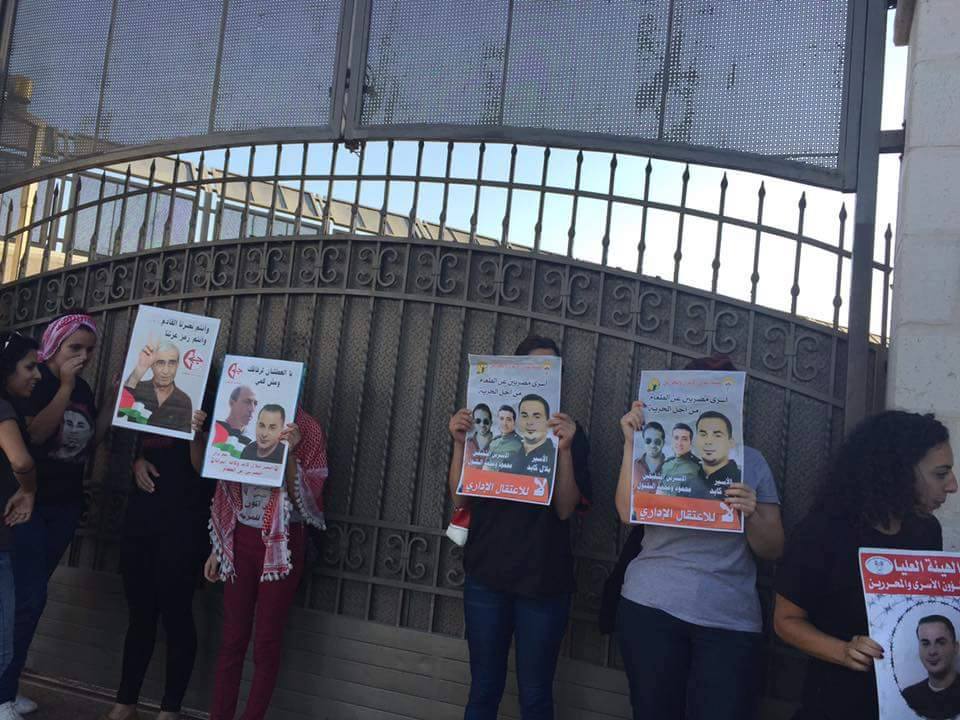 During August 2016, Israeli occupation forces arrested 516 Palestinians from the West Bank and Gaza, including 73 children and ten women, including two minor girls. The institutions noted that 143 arrests took place in Jerusalem; 100 in al-Khalil; 57 in Bethlehem; 51 in Jenin; 37 in Ramallah and El-Bireh; 35 in Nablus; 34 in Tulkaren; 18 in Qalqilya; nine in Tubas; five in Jericho; and four in Salfit.

There are approximately 7,000 total Palestinian prisoners in Israeli prisons, including 56 women prisoners. This number includes 13 minor girls. The total number of child prisoners is 340, held mostly in Megiddo and Ofer prisons. 159 administrative detention orders were issued in August, including 52 new orders issued for the first time.

Israeli occupation forces continued a systematic policy of arbitrary detention against Palestinians in the Gaza Strip in disregard for international humanitarian and human rights law, particularly in failing to follow legal procedures on the matter of arrest and detention as well as the violation of fair trial guarantees in international conventions. Palestinian detainees are deprived of their right to access evidence about their cases or identify the reasons for their detention and are denied the right to legal council before trial. Under the law of the Israeli occupation, they can be denied access to a lawyer for over 21 days as well as denied the ability to communicate with the outside world, including refusing to allow detainees to inform a third party of their arrest and detention.

The occupation forces use excessive force, notably that faced by the fishermen, including heavy gunfire at sea, in clear violation of the Code of Conduct for Law Enforcement of 1979, and the use of torture and cruel, inhumane and degrading treatment.

The institutions highlighted nine incidents resulting in the arrests of 23 civilians in August, including 17 arrested at sea, 2 from Beit Hanoun/Erez crossing, and 4 as they approached the eastern borders of Gaza.

Individual and collective strikes by prisoners in Israeli jails

Prisoners in the occupation prisons carried out hunger strikes in August for various reasons, most critically administrative detention. The most notable strike is that of the prisoner Bilal Kayed, who refused food for 71 days in rejection of the imposition of administrative detention upon him after completing a 14.5-year sentence in Israeli prisons. He ended his strike in an agreement that will see him released on 12 December.

Four more prisoners carried out a hunger strike for 19 days: Ziad al-Bazzar, Ahmed Barghouthi, Mahmoud Sarahna and Amin Kamil, in protest of the International Committee of the Red Cross’ cuts to family visits from two monthly visits to one, and their strike ended after receiving promises of serious moves to restore their family visits.

Prisoners also engaged in mass strikes, most notably the solidarity strike conducted by the prisoners of the Popular Front for the Liberation of Palestine in support of Bilal Kayed, carried out in successive waves in most prisons. For several days, dozens of Hamas prisoners engaged in a hunger strike in protest of collective punishment and the aggressive “inspections” and raids carried out by repressive forces, as well as arbitrary transfers of a number of prisoners.

Sanctions imposed on prisoners for solidarity with the striking prisoners

Since Bilal Kayed launched his open hunger strike on 15 June 2016, a number of prisoners of the PFLP engaged in solidarity protest steps in successive waves to support Kayed’s demands, especially his refusal to accept administrative detention after completing his prison sentence. The prison administration imposed a series of sanctions on prisoners engaged in solidarity actions, including cutting canteen (prison store) account availability from 1,200 NIS to 600 NIS, isolation of prisoners on hunger strike, transfer of a number of leaders of the prisoners from one prison to another, locking down sections of the prisons and invasions with special repressive units.

During a visit by lawyers to the prisoners in Gilboa prison, they reported that they were subject to a series of repressive practices during 21 days of hunger strike in support of Kayed, including denial of lawyer visits, denial of family visits for two months, closure of their canteen accounts, isolation and transfer to other prisons. They were also subject to daily invasions and raids by repressive units despite the fatigue of the striking prisoners.

These sanctions remain imposed on a number of PFLP prisoners even after the conclusion of the hunger strike, and some prisoners are continuing to return meals for two days weekly in protest of the continued sanctions and harassment against them.