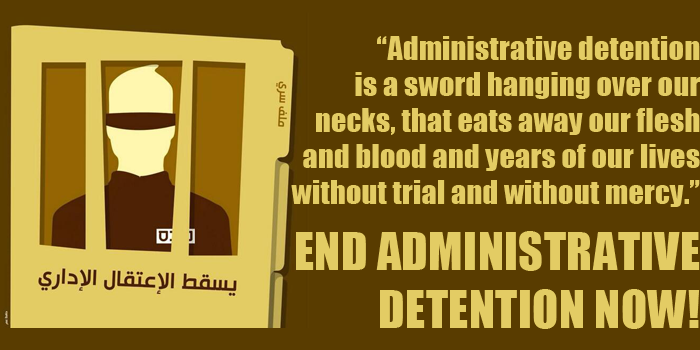 There are over 700 Palestinians held without charge or trial on the basis of so-called “secret evidence” under Israeli administrative detention. Orders are issued for periods of one to six months, and are indefinitely renewable.

Among those ordered to imprisonment without trial was Palestinian Legislative Council member Mohammed Jamal Natsheh, who was ordered to six months in prison. Natsheh, an elected PLC member of the Hamas-aligned Change and Reform bloc has been repeatedly arrested and imprisoned, spending nearly 20 years in prison. Natsheh’s recent arrests have all been under administrative detention orders, repeatedly renewed.

Also among those ordered to administrative detention was Mohammed Harb of Jenin, ordered to six months imprisonment. Harb was arrested by Israeli occupation forces after six months’ imprisonment by the Palestinian Authority, alongside five other Palestinian youths. While their case was initially trumpeted by PA officials as a triumph of “security coordination,” they were imprisoned for months with no charges against them and finally released after a growing Palestinian and international outcry denouncing PA security coordination with the Israeli occupation.

The full list of Palestinians ordered to arbitrary imprisonment is below. Those which are new orders are marked as such.