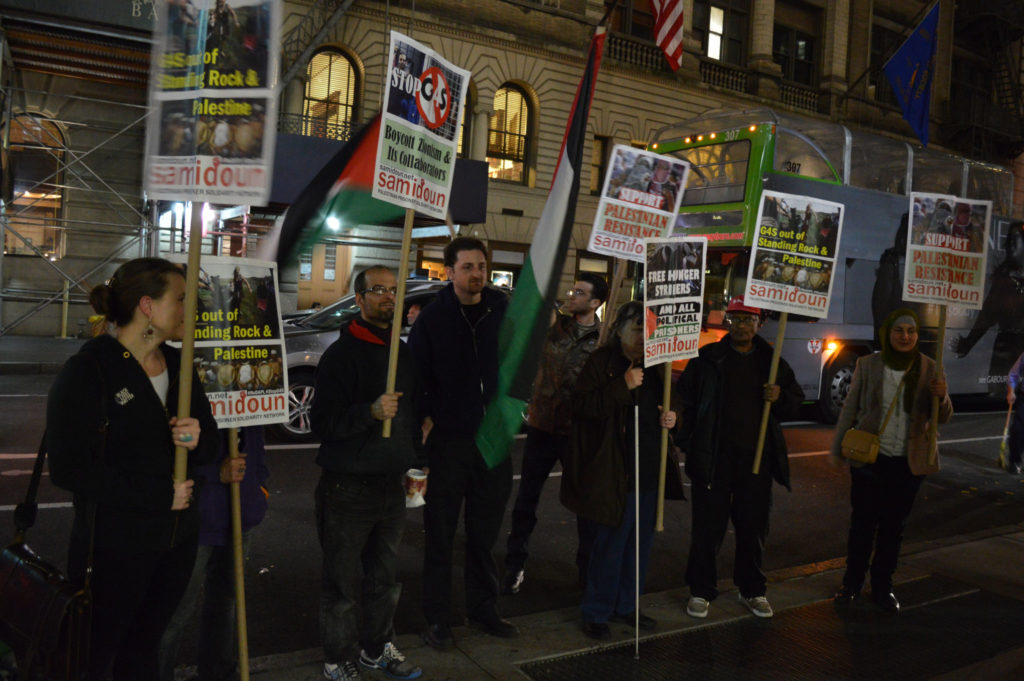 Protesters in New York City gathered outside the offices of multinational security corporation G4S on Friday, 18 November to denounce G4S’ role in providing private security for the Dakota Access Pipeline against the water protectors’ camp led by the Standing Rock Sioux, and to demand the corporation get out of Palestine and end its profiteering from occupation. Samidoun Palestinian Prisoner Solidarity Network gathered outside the G4S offices in Manhattan, chanting, holding placards and distributing information about G4S and Palestinian political prisoners. 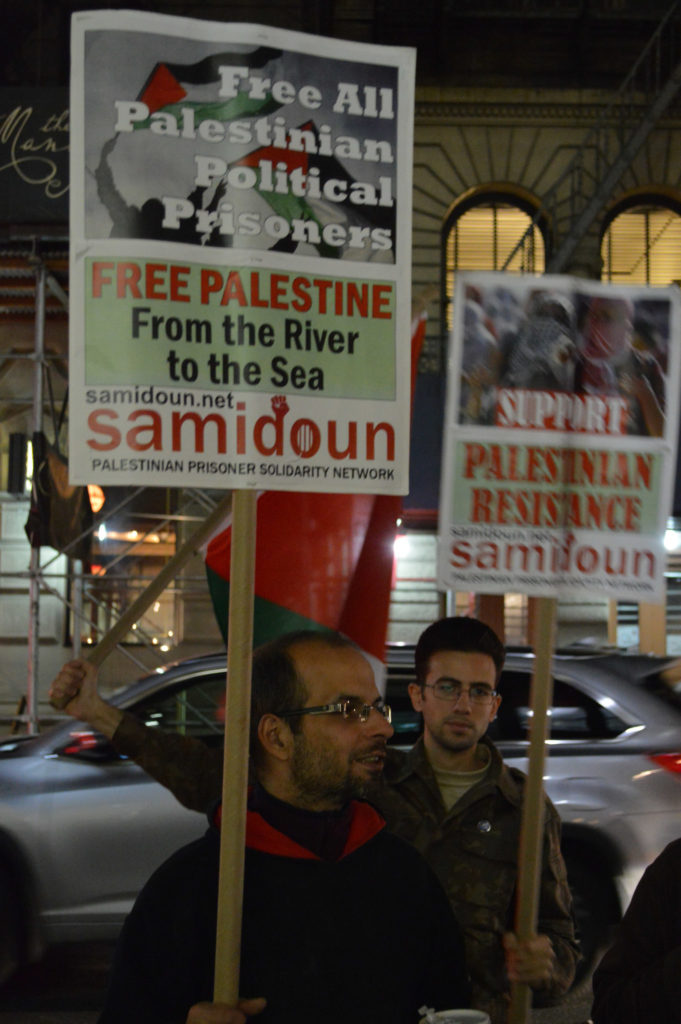 G4S is subject to a global campaign for boycott due to its contracts with the Israel Prison Service and other state agencies to provide security systems, control rooms and equipment to Israeli prisons, checkpoints and police training centers. The corporation is also involved in migrant detention and deportation and youth incarceration in the US, Canada, UK, Australia and elsewhere. Multiple campaigns for justice in Palestine, private prison divestment and prison abolition have campaigned for boycott and divestment from G4S due to its international role in repression. In Standing Rock, G4S is part of the private security forces mobilized on behalf of the Dakota Access Pipeline, where indigenous protesters have set up camp to defend the land and water of the Standing Rock Sioux from the destructive and dangerous project. G4S has pledged to sell off its “reputationally damaging” businesses like its entire Israeli subsidiary and its involvement in youth imprisonment, yet it remains in Palestine today. Palestinian activists have emphasized the importance of continuing to protest G4S. 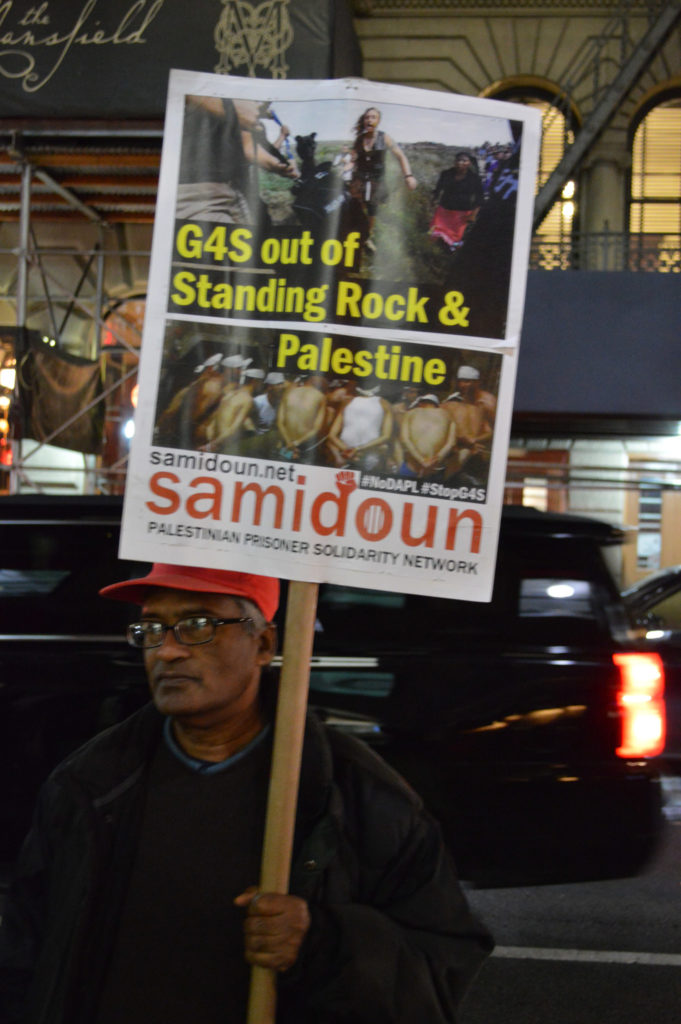 When protesters arrived at the G4S offices in Manhattan on Friday, the doors were locked despite the fact that the office building’s corridor is a legally-designated public space. However, several groups of protesters were able to enter this public corridor at various times to march through the inside, chanting loudly, “Occupation is a crime, from Standing Rock to Palestine!” and “Stop detentions, stop the crimes! G4S out of Palestine!” They marched through the corridor to the other side of the building before returning the same way. 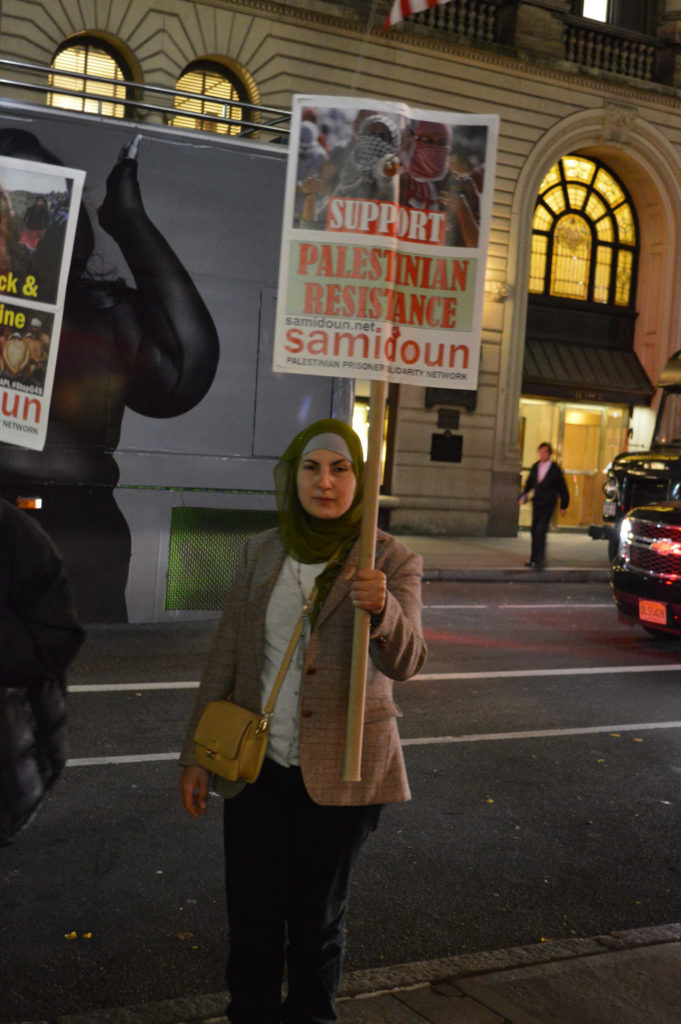 The protest highlighted the hunger strikes of Ahmad Abu Fara and Anas Shadid, who are held in Assaf Harofeh hospital. They have been on hunger strike since 25 September in protest of their imprisonment without charge or trial under Israeli administrative detention. Both have suffered severe health difficulties; their detention has been “suspended” by the Israeli supreme court due to their health crises, yet they have vowed to continue their strikes until their detention orders are lifted. Also highlighted was the struggle at Standing Rock against the Dakota Access Pipeline and for indigenous rights and protection of the water. Protesters likened the settler colonial destruction of the pipeline and attacks on indigenous protesters with the repression of Palestinian strugglers against Zionist settler colonialism. 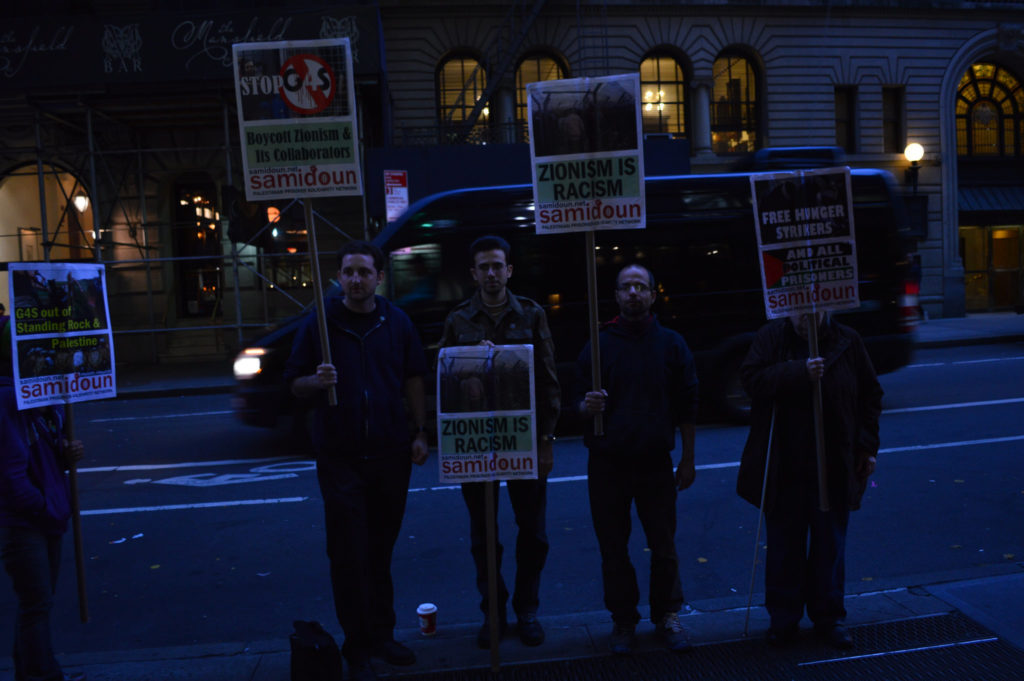 Samidoun will hold its next New York City protest on Friday, 25 November, in a new location – at the Best Buy on Union Square. This protest, held on Black Friday, the biggest shopping day of the year, is part of the International Week of Action to Boycott Hewlett-Packard. This week of action includes events in hundreds of international cities. The Palestinian Boycott, Divestment and Sanctions National Committee is urging action to boycott HP due to its role in providing a range of services to the Israeli apartheid system for profit, including management databases and software for Israeli prisons, in addition to imaging services for checkpoints, computing services for settlements, and involvement in the siege on Gaza. The protest will take place at 4:00 pm at 52 E. 14th St (Union Square) and all are urged to attend to take a stand against HP’s involvement in Israeli crimes against the Palestinian people. 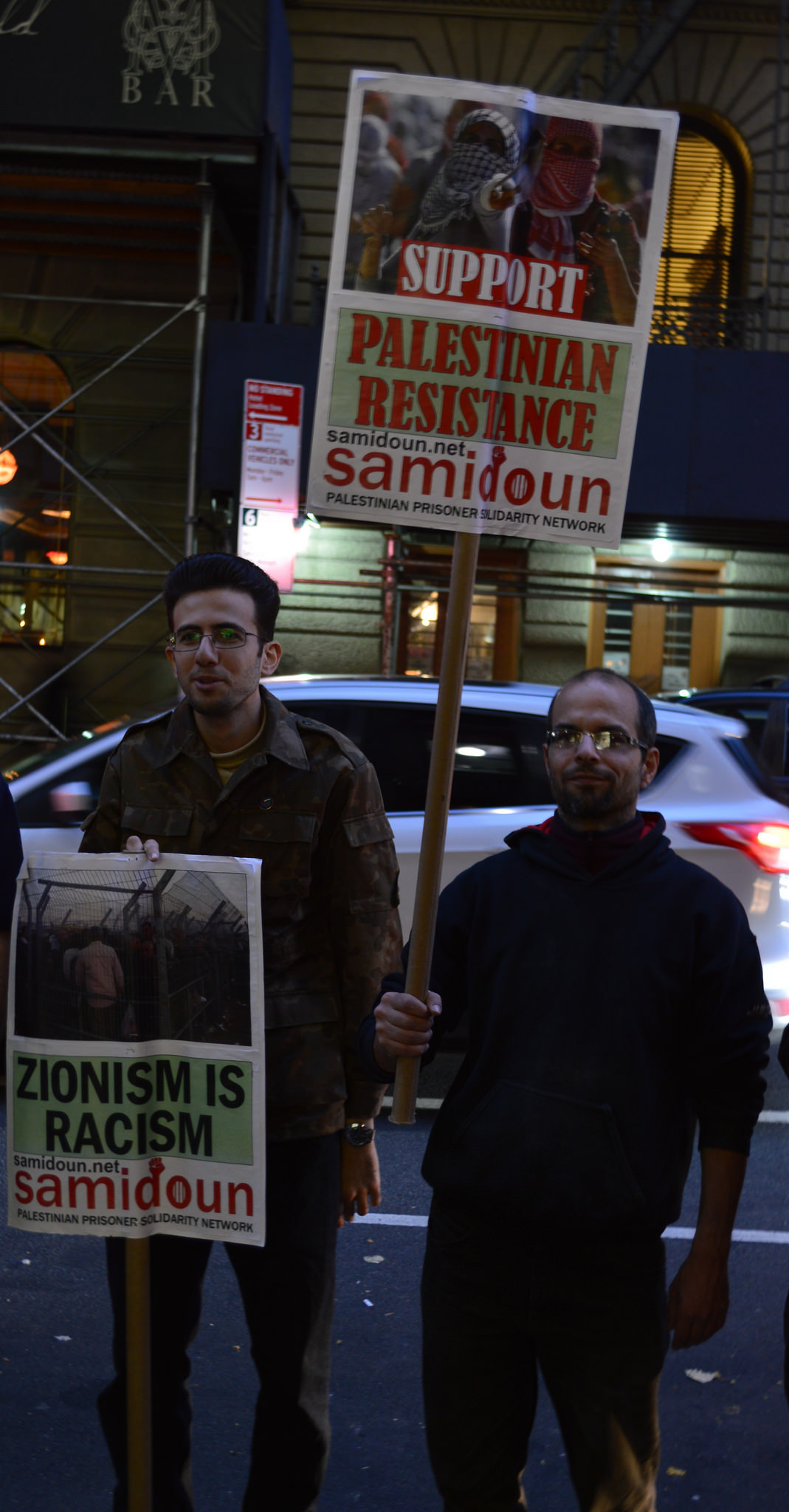