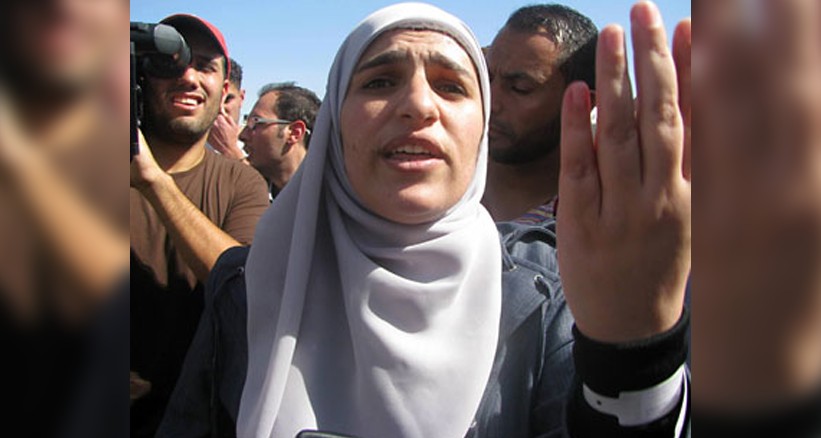 Shahtit’s husband, Yousef Abu Sabha, said that occupation soldiers stopped their vehicle at the entrance of the camp at a suddenly-erected flying checkpoint before seizing his wife and taking her away in a military vehicle. She later was able to call her husband to tell him she is being taken to the detention and interrogation center in Kiryat Arba settlement.

Shahatit has been arrested on multiple occasions. On 1 June 2009 she was arrested by Israeli occupation forces and sentenced to 50 months in prison. She was liberated from Israeli prison in the Wafa al-Ahrar prisoner exchange agreement in October 2011. Since her release from prison, Shahatit, 30, married and had three children, Hamza, Ibrahim and Abrar. Her youngest child is 9 months old, and her older children are 2 and 3 years of age.

On 4 August 2016, she was again seized by occupation forces as she passed through a checkpoint and taken to HaSharon prison, accused of “violating the terms of her release.” She was released 12 days later on bail conditions while the secret Israeli military committee that can re-impose sentencing on former prisoners considered her case; she was forbidden to leave her home town or participate in any events. She was also ordered to report weekly to the police at Kiryat Arba.

On 3 January 2017, Palestinian lawyer Ahmed Safia of the Palestinian Prisoners Society reported that the Ofer military court had decided not to reimpose her sentence, however, that for the next five years, Shahatit must not “breach her release conditions.” Over 50 Palestinian prisoners released in the Wafa al-Ahrar exchange have had their original sentences reimposed by the military committee on the basis of secret evidence. The longest-held Palestinian prisoner, Nael Barghouthi, currently remains imprisoned while this committee is considering reimposing his life sentence in an appeal by the military prosecution.

This evening, only two weeks after that apparent court victory, Shahatit was again arrested and taken from her young children.

Of a total of approximately 60 Palestinian women imprisoned in Israeli jails, 11 are held in Damon prison. The majority of Palestinian women are held in HaSharon prison, and those held in Damon have repeatedly complained of poor conditions and lengthy “bosta” trips that can take up to three days to travel to and from the military court due to repeated stops and searches, despite close physical proximity.

Palestinian lawyer Hanan al-Khatib of the Prisoners Affairs Commission stated that the 11 women are housed in one section of two rooms and that they continue to experience poor conditions and harassment from jailers.

Haifa Abu Sbeih, the representative of the prisoners in Damon, is an elementary school principal and a board member of the Democracy Center in Ramallah. Abu Sbeih noted that the prison administration had agreed to improve conditions but that none of the agreements had been implemented.