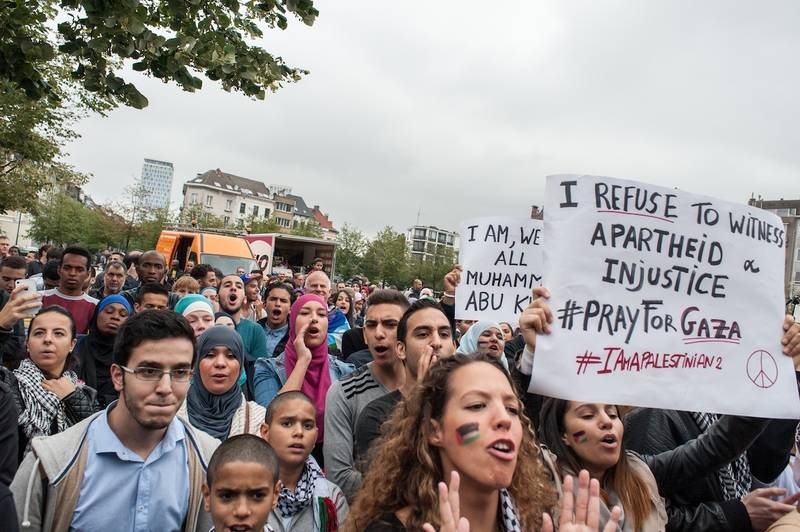 Solidarity with Antwerp activists for Palestine facing prosecution: translated from French; originally published at pourlapalestine.be, the site of Plate-Forme Charleroi-Palestine.

Three demonstrators who participated in a 2014 protest in Antwerp, Belgium against the attack on the Gaza Strip were called before the court in Antwerp on 24 January. They are charged with incitement to racism against the Jewish community in Antwerp, not based on independent findings by the police, but instead on a complaint filed by supporters of Israel. Based on a very thin file, the public prosecutor began a prosecution against the three, joined by the Centre Against Racism. The prosecution is seeking heavy penalties against the defendants: six months in prison for two of the three defendants, identified as the organizers, and 60 days of community service for a Palestinian from Gaza.

The ruling in the case will take place on 21 February.

Below is the statement previously circulated by the event organizers:

On 8 July 2014, the Israeli regime launched another attack on Palestinians. For nearly two months, the Gaza Strip is bombed. 2,100 people were killed – 70% of them civilians – including 551 children and 250 women. 11,000 were injured, 44,300 homes damaged and 18,000 homes, schools, hospitals and power plants destroyed. The horror and outrage in Europe is widespread and for two months, demonstrations were held everywhere, including in Brussels and Antwerp.

Facts: What is the complaint?

On 12 July, around 800 people demonstrated at Sint-Jansplein in the center of Antwerp. The event took place in a highly emotional context and the speakers, including three municipal councillors from the SP.a, Workers Party of Belgium and the Greens were interrupted continuously by chants from the crowd. Despite the high levels of feeling in the crowd, the demonstration ended without incident as was confirmed by the police at the time. The Flemish channel VRT ran a news story, entitled: “Protesters in Antwerp against the violence in Gaza.”

However, Michael Freilich of “Joods Actueel” began to scrutinize photos of the event and claimed that he heard some screaming for a few seconds, “Khaibar, Khaibar ya Yahud.” The next day, he wrote that “The slogan chanted specifically refers to the Jewish community and not to Israel.” There was no mention of countless flags and slogans and official chants during the demonstration, clearly and exclusively directed against Israel. Instead, this issue focuses on a single chant in the crowd for seconds and a specific interpretation. The FJO, Forum of Jewish Organizations in Antwerp, announced it would file a complaint, and Pinkas Kornfeld did so three days later, denouncing the organizers of the rally.

The Zionists, the supporters of the state of Israel, must see painfully clearly that the outrage over the conduct of the state of Israel mobilizes more and more people. This was the case in 2014 and increasingly so with successful boycott actions. The tactic is well-known: the slightest criticism of the Israeli regime is labeled as tantamount to an “anti-Semitic” or “anti-Jewish” act. Among the European population, traumatized by the horrors of the Holocaust, these terms are extremely sensitive. The atrocities committed by the Israeli regime are constantly denounced internationally, yet Zionist propaganda continues to abuse the terms “anti-Semitic” and “anti-Jewish.”

The Israeli regime, supported by Zionists worldwide, presents the occupation of Palestine as a conflict between Jews and Muslims. If someone were to be summoned before a court of law due to incitement to racism, it would be rather logical in this case that it would be defenders of Israel. Pro-Palestinian activists are constantly obliged to denounce this lie and to draw attention to the real problem: occupation and colonization characterized by constant aggression against the Palestinian people. Terror has no religion, and neither does occupation. Religion is used as a pretext for the sole purpose of mobilization. This is the case for the “Islamic State” and this is the case for the “Jewish State.”

Those who resist Zionism are not anti-Jewish; this is evidenced by the anti-Zionist Jews who defend a just and righteous peace in Palestine. They participate in the pro-Palestinian demonstrations. Why, then, would these same demonstrations target the Jewish people or the Jewish religion? At the event in Antwerp, nobody incited violence against the Jewish community in Antwerp. It is Freilich and Kornfeld who made a faulty conclusion.

Discouragement of the pro-Palestinian demonstrations and the boycott

It is not a question of three individuals but of an entire solidarity movement. The next step is obviously an attempt to silence the growing calls for the boycott of Israel, an attempt we already see taking place elsewhere. The people summoned are being arrested for being protest organizers, and it is clear that the goal is to intimidate and discourage the organizers of protest demonstrations.

That the Zionist movement continues to apply these tried and tested tactics is no surprise. From Israel, it is supported by official programs and hasbara.

What is alarming in the present case is that the Antwerp Prosecutor accepted the complaint and that the Center Against Racism has joined as an injured party. It is a world turned upside down! The prosection and UNIA who defend the true racists against those who stand against racism and colonization. The importance of this cannot be underestimated. (*)

* The current attitude of UNIA, the Federal Center for Combating Racism, is unclear. They were not present at the trial, but the lawyer did not receive any information that they are withdrawing.

Support the pro-Palestinian demonstrators!
Freedom of expression and the right to criticize the Israeli regime!
Criticism of Israel is criticism of Zionist regime and ideology, not of Jewish religion or Jewish people!
“Joods Actueel” and the Forum of Jewish Organizations in Antwerp are not the representatives of all Jewish people.

How to support the protesters