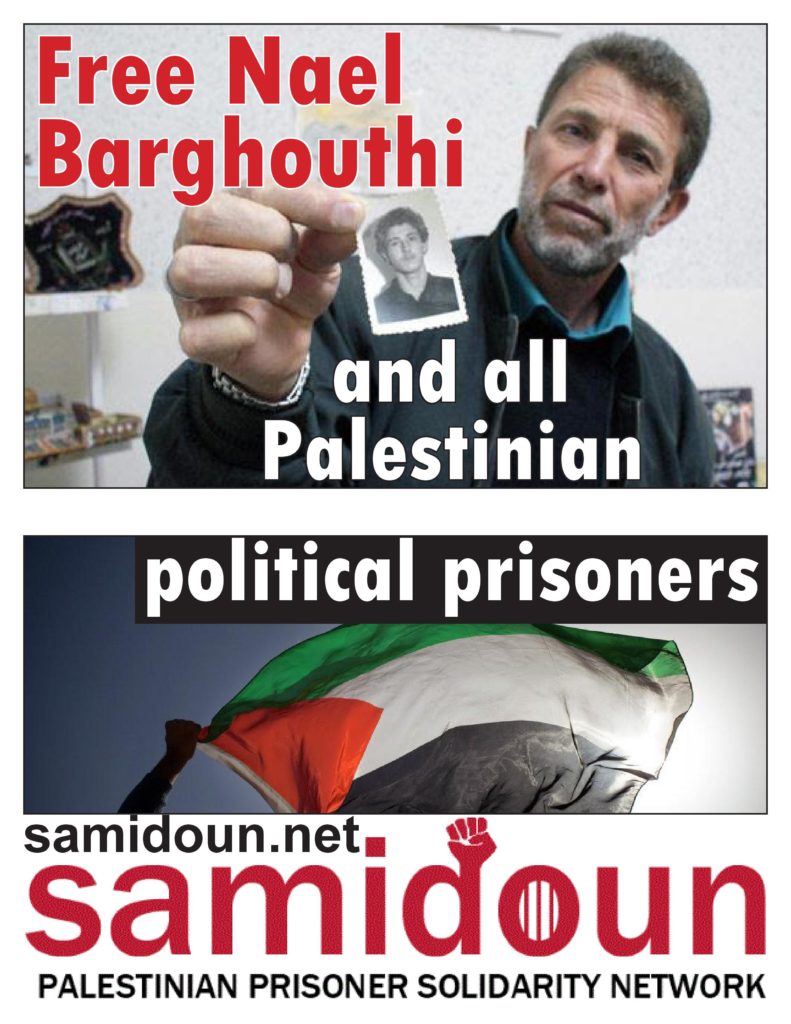 The Israeli military court at Ofer will issue a decision on the case of Nael Barghouthi, the longest-held Palestinian prisoner on Wednesday, 22 February, reported Barghouthi’s wife Iman Nafie in Asra Voice. This decision will come in response to the appeal by the Israeli occupation military prosecution of Barghouthi’s imprisonment for 30 months – a sentence that expired on 17 December 2016.

Barghouthi, 59, has spent 36 years in Israeli prison. Originally serving a life sentence, he was released in 2011 with over 1,000 fellow Palestinian prisoners as part of the Wafa al-Ahrar prisoner exchange. In 2014, he was swept up by occupation forces with dozens of fellow former prisoners in an attempt to pressure Palestinian resistance organizations. Under Israeli military order 1651 and in violation of the release agreement, re-arrested former prisoners can have their original sentences reinstated by a military committee on the basis of secret evidence, to which both the Palestinian prisoner and their lawyers are denied access.

While dozens of former prisoners had their full sentences reimposed by this military committee, Barghouthi was sentenced to 30 months in Israeli prison. However, in 2015, his sentence was appealed by the Israeli military prosecution, which seeks to reimpose his life sentence. Since his 30-month sentence expired on 17 December 2016, he and his family have been struggling for his release; instead, however, he has been transferred between prisons on multiple occasions and denied release while the occupation prosecution’s appeal is pending.

Addameer Prisoner Support and Human Rights Association and Samidoun Palestinian Prisoner Solidarity Network are joining in this urgent call for action to pressure Israel to release Nael Barghouthi, being held as a political hostage by the Israeli government.

I write today to demand  immediate release of the longest-held Palestinian prisoner Nael Barghouthi, held for a total of 36 years in Israeli prisons. Nael Barghouthi is being threatened with the re-imposition of his life sentence on the basis of so-called “secret evidence”  by an arbitrary Israeli military committee.

Nael Barghouthi was released with over 1,000 prisoners in the 2011 Wafa al-Ahrar prisoner exchange. In 2014, along with dozens of fellow released prisoners, Barghouthi was re-arrested. Under Israeli military order 1651 – that contravenes the term of the prisoner release – re-arrested prisoners can have their former sentences reimposed upon them by a military committee on the basis of secret evidence.

Barghouthi was originally sentenced to 30 months on the basis of secret evidence, yet the Israeli military continues to pursue him and seek the re-imposition of his life sentence. He has also been denied family visits with his wife on the pretext of “security” as she is a former prisoner.

I demand the immediate release of Nael Barghouthi and an end to the re-imposition of former prisoners’ sentences on the basis of so-called secret information. This is an attempt to use Palestinian former prisoners as political hostages in future prisoner exchanges and to violate the exchange agreement itself. His continued detention is arbitrary and unjust, and I demand his immediate freedom.