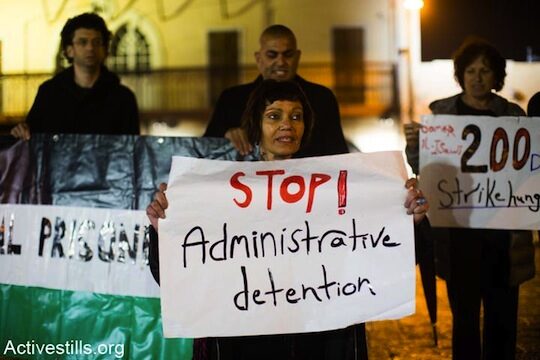 Israeli occupation forces issued another 30 administrative detention orders for the imprisonment without charge or trial of Palestinians between 13 and 20 March, 2017.

Palestinian lawyer Mahmoud Halabi reported that the orders included 12 new orders and 18 renewals of existing administrative detention orders. One of the detention orders renewed here was that of Mohammed Harb, 23, from Jenin, one of the comrades of slain Palestinian youth leader Basil al-Araj, who was assassinated by Israeli occupation forces on 6 March. Harb was among five young Palestinians imprisoned with al-Araj in Palestinian Authority prisons for five months; he was seized by Israeli occupation forces soon following his release. Seif al-Idrissi, Mohammed al-Salameen and Haitham Siyaj are also held in administrative detention without charge or trial.

Currently, three Palestinians are on hunger strike against their administrative detention: Mohammed Alaqimah, Raafat Shalash and Akram al-Fassisi, himself a former long-term hunger striker re-arrested after his prior release from imprisonment without charge or trial.

The 30 Palestinians who were ordered to administrative detention are: