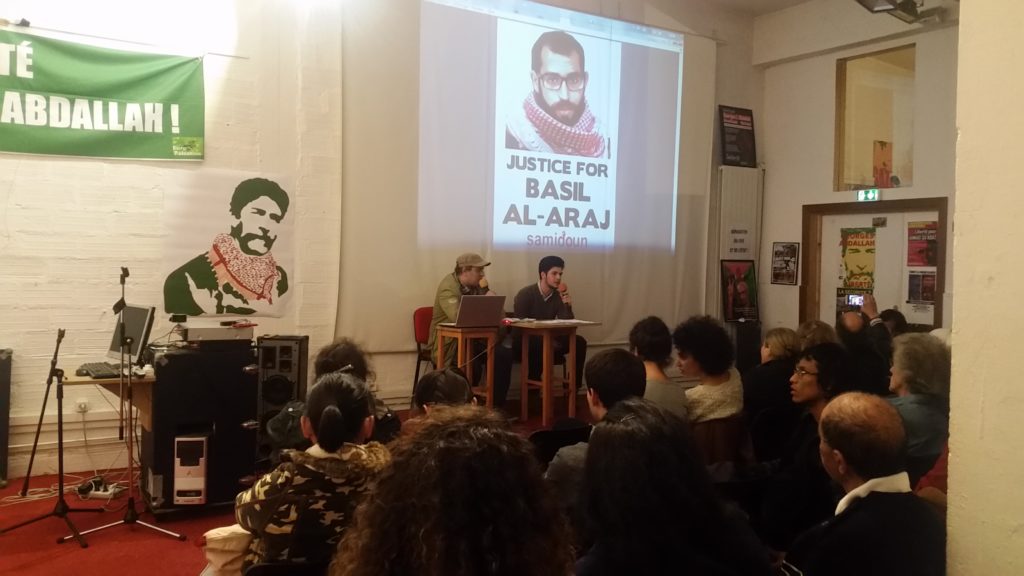 Dozens of activists and campaigners gathered in Paris on Saturday, 18 March for meetings and a public event in solidarity with Georges Ibrahim Abdallah, Lebanese Communist struggler for Palestine held in French prisons for over 32 years. The event, organized by the Unified Campaign to Free Georges Ibrahim Abdallah, marked the International Day of Revolutionary Prisoners.

Campaigners in support of Georges Abdallah from a wide array of organizations, including the Unified Campaign to Free Georges Abdallah, the Collective to Free Georges Abdallah, Samidoun Palestinian Prisoner Solidarity Network, the Campaign to Free Ahmad Sa’adat, Coup Pour Coup 31, CAPJPO-EuroPalestine, the Committee to Support Palestinian Resistance in Lille, the Bagnolet group in solidarity with Georges Ibrahim Abdallah, the Hamburg Palestine Action Committee, Le Cri Rouge, Secours Rouge/Red Aid, the Lannemezan collective in solidarity with Georges Abdallah, the United Front of Immigrants and Popular Neighborhoods (FUIQP) and a number of others, including groups that organize around political prisoners in Italy, Tunisia, Morocco and in support of Turkish and Kurdish prisoners in Turkey.

The participants discussed plans of action for the upcoming year of struggle to free Georges Abdallah, including campaigns, actions and international efforts to draw attention to this imprisoned struggler. They planned collective protests as well as increased advocacy in popular neighborhoods and communities throughout France and actions as part of the Palestine solidarity movement, including participating in the 1 April BDS demonstration in Paris, and 17 April actions for Palestinian Prisoners’ Day and the ensuing action week. 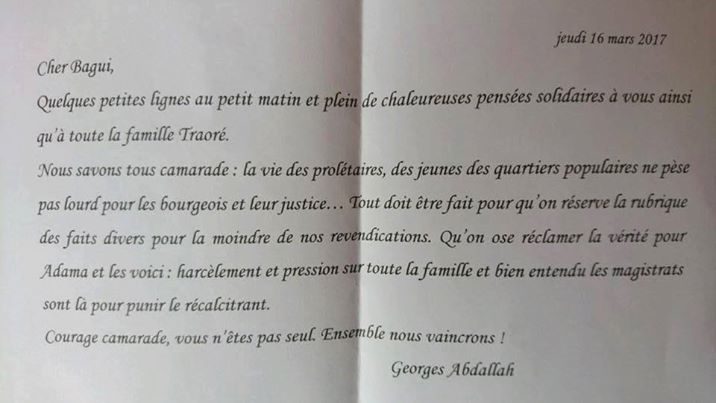 Participants also noted the importance of working with the movement to confront police violence, repression and racism. Abdallah himself recently wrote a letter to Bagui Traoré, the brother of Adama Traoré, killed by French police, expressing his solidarity. He denounced the ongoing harassment of the Traoré family and highlighted Adama’s case as part of the struggle of working-class and oppressed youth and communities.

In the evening public event that concluded the meeting, a packed room at Librairie Résistances saluted Abdallah and his fellow prisoners. A number of speakers from committees working to free Georges Abdallah spoke at the event, which also included several videos reviewing Abdallah’s story, including one produced by Secours Rouge in Brussels, and the international advocacy for his freedom.

Suzanne Le Manceau of the Collective to Free Georges Ibrahim Abdallah read a new statement from Abdallah, issued from Lannemezan prison for the occasion. “These days, Palestine daily sees its toll of young martys. The resistance continues, and certainly will continue so long as the occupation lasts. The Palestinian masses need more than ever your active solidarity,” said Abdallah. 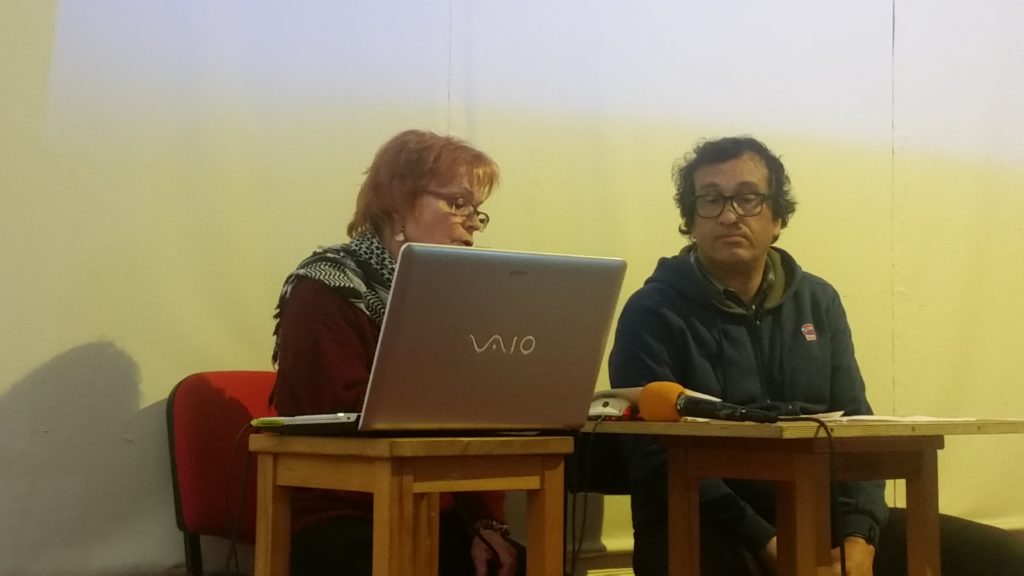 In the statement, he emphasized the struggle of Palestinian child prisoners, noting that “I would like to draw attention to the increasing number of Palestinian minors who are increasingly involved in the struggle of the masses and who are facing severe repression by the Zionist army and the courts that inflict heavy sentences upon them. When one is barely 14 or 15 years old and one are sentenced to 10 or 15 years, international solidarity is necessary. Certainly you all know how to do that. A little word from time to time for each ‘lion cub’ and for each ‘flower’ makes it known to the Zionist jailers that these children are not alone.” 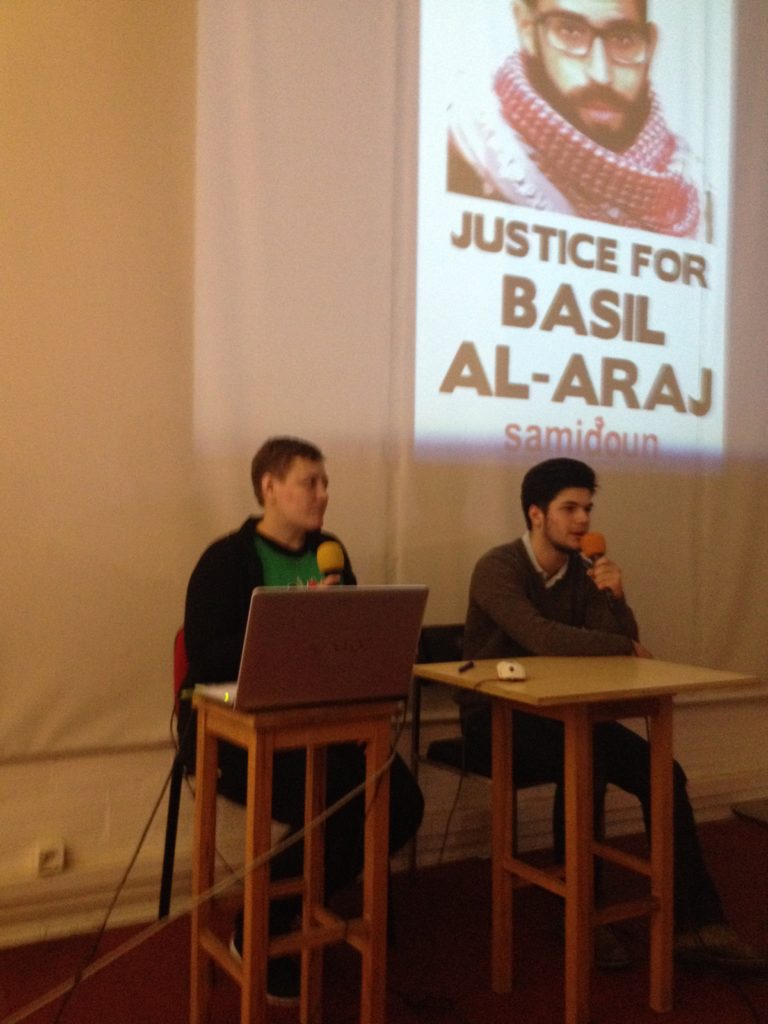 She also noted that Palestinian unity within the prisons is strong and based on daily confrontation with the occupation, highlighting the ongoing raids, transfers and use of isolation and solitary confinement against the prisoners. In addition, she noted that Abdallah himself is part of all of this: a symbol of resistance, a leader denied to Palestinian, Aab and international struggles due to imprisonment, and a unifying force for leftist and progressive forces in France, Lebanon and elsewhere.

Kates also noted that the struggle to free Palestinian political prisoners is an internationalist one, that links with the struggles of political prisoners in imperialist jails or those of reactionary regimes. She also emphasized the importance of the struggle against racism, repression and police violence, noting that international police forces and states, including European states, the U.S. and Israel, were united in sharing training, technologies and information, and that collective struggle and mutual solidarity is important for the victory of all popular struggles against injustice, imperialism, Zionism, racism, capitalism and colonialism. 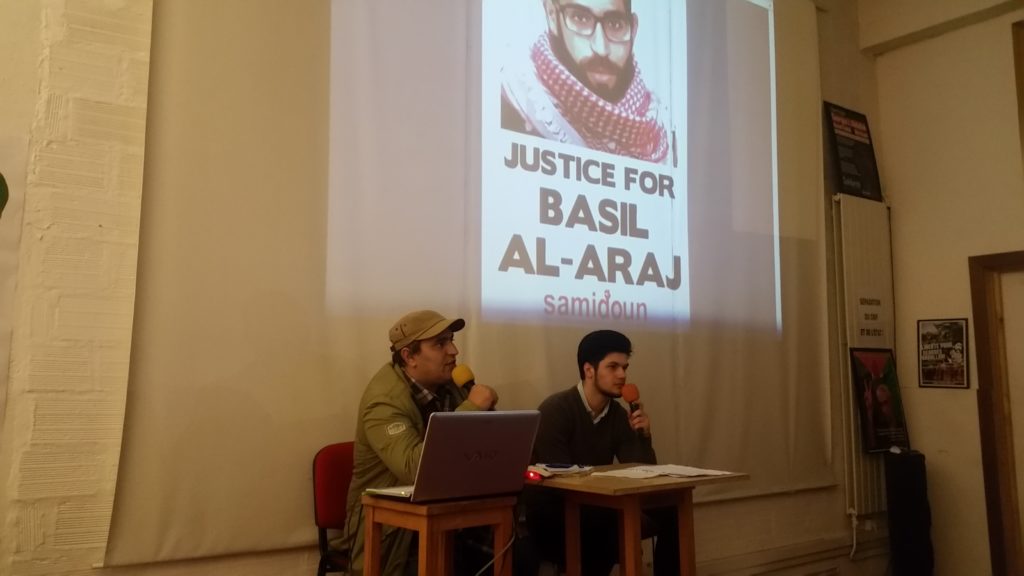 Khaled Barakat, the international coordinator of the Campaign to Free Ahmad Sa’adat, began his talk by saluting the young Palestinian leader and activist, Basil al-Araj, shot down by Israeli occupation forces as he resisted on 6 March. With an image of al-Araj projected behind him, Barakat noted that both al-Araj and Abdallah were deeply committed to revolutionary principle, even at deep personal cost to themselves, over the years.

He situated the case of Georges Ibrahim Abdallah in its historical context, particularly in the year 2017. He noted that this year marks 100 years of the colonization of Palestine, but also 100 years of Palestinian resistance – and 100 years of the victorious Russian revolution. In addition, he noted that 2017 is the anniversary of 70 years of al-Nakba, 50 years of the occupation of the West Bank, Jerusalem, Gaza Strip and the Golan Heights and 50 years of the founding of the Palestinian revolutionary left organization, the Popular Front for the Liberation of Palestine. On this year of important anniversaries – all of them connected to the life of struggle of Georges Abdallah – he urged participants to escalate the struggle for Abdallah’s freedom, saying that 2017 should become a year of liberation for Abdallah. 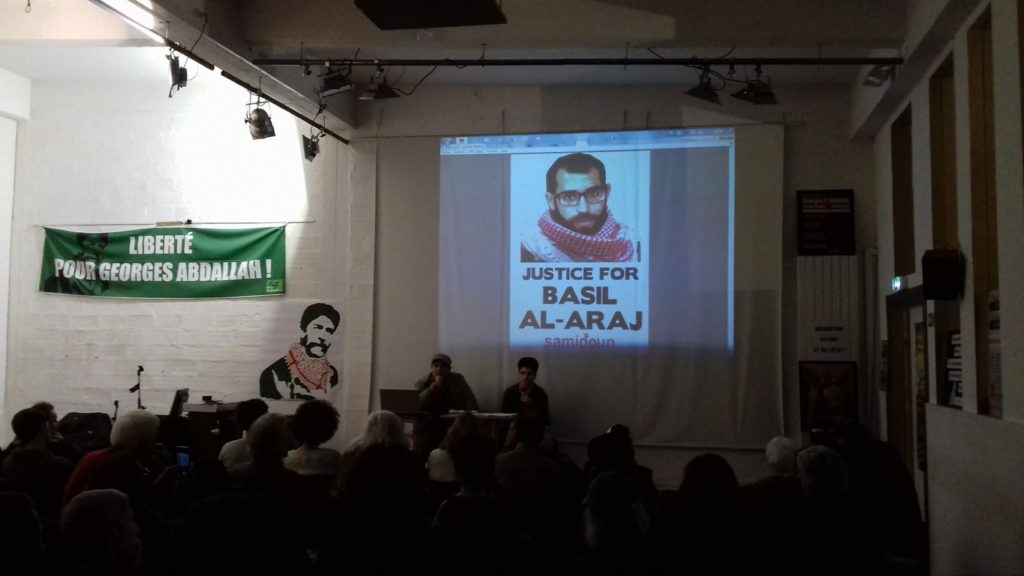 Barakat also emphasized the role of Georges Abdallah in leading and uniting the left in France as well as in the Arab world and in Palestine. Abdallah’s voice is a clear voice of principle from French prisons, that is connected to the struggles of people everywhere in the world, evidencing his deep knowledge and attention to popular movements everywhere. He said that French embassies and consulates should always be a site of protest and confrontation, demanding freedom for Abdallah.

He emphasized that the French state bears the primary responsibility for the imprisonment of Abdallah, with the assistance and participation of the United States and Israel. However, he noted, the Lebanese government is not living up to its responsibilities to defend its citizen and demand his release. He noted the shameful sight of Lebanese political figures and leaders welcoming right-wing leader of the Front National, Marine Le Pen, while remaining silent on the imprisonment of Georges Abdallah and pushing demonstrators far away from the French embassy in Beirut. Thus, Barakat emphasized, the Lebanese state remains complicit through its inaction and acquiescence to the continued imprisonment of Georges Abdallah. He urged intensified pressure on the Lebanese government, through protests, political actions and delegations to Lebanon to intensify the campaign to free Abdallah. 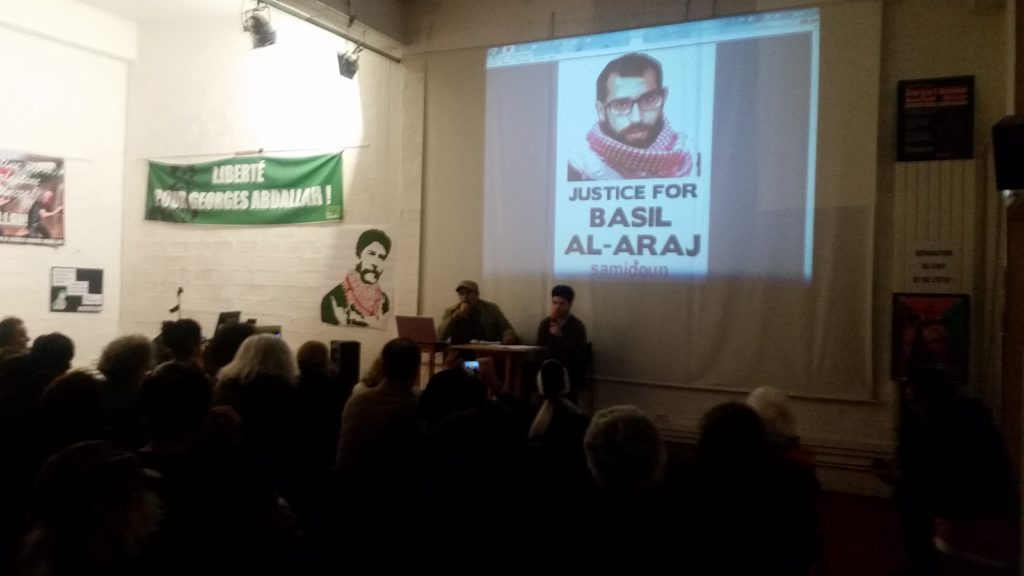 Barakat noted that Abdallah is an integral part of the radical and revolutionary left, and that all forces must work toward unity and revival of the movements of the Left, especially on the 100th anniversary of the October Revolution. “Any oppressor will lose the battle of imprisonment when they cannot confiscate the voice of the prisoner, because his voice is the voice of the streets, the voice of the people,” Barakat said.

The event concluded with announcements of upcoming events, song and video demanding freedom for Abdallah in the hall decorated with banners, signs and posters demanding Abdallah’s freedom. 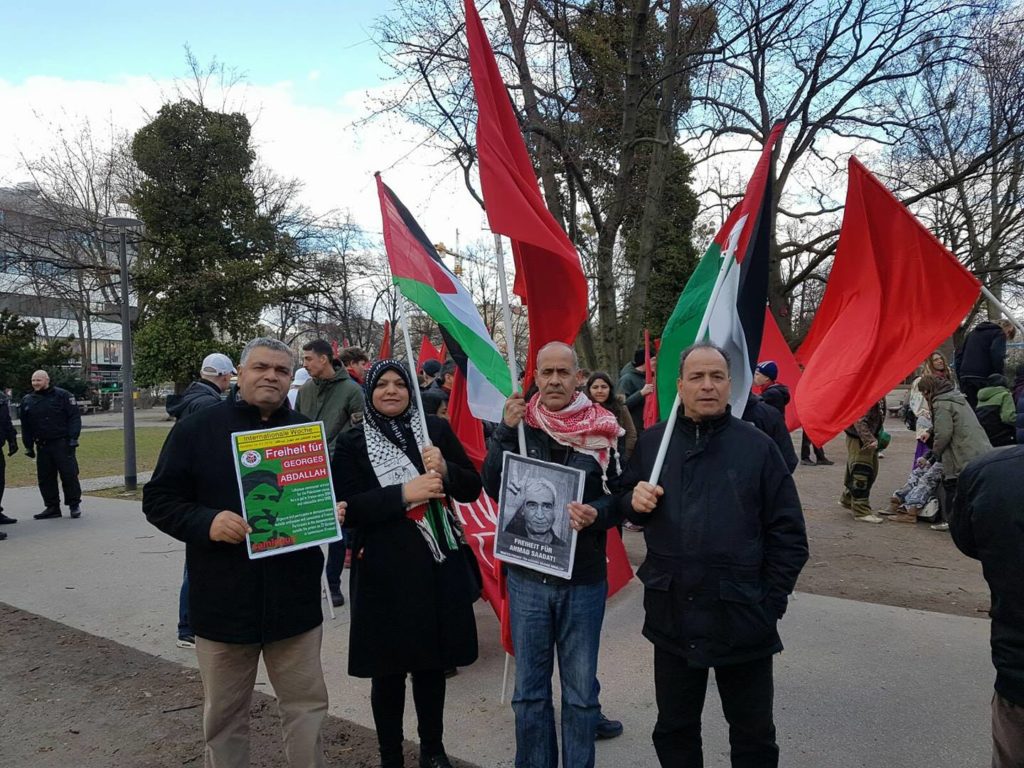 The Paris event coincided with other international events for the Day of Revolutionary Political Prisoners, which commemorates the 1923 founding of the International Red Aid by the Communist International as well as marking the anniversary of the Paris Commune. In Turkey, activists gathered to support Turkish and Kurdish political prisoners in Turkey’s jails, while also saluting Georges Abdallah, Ahmad Sa’adat, Rasmea Odeh and other strugglers for justice. In Brussels, Secours Rouge held an event that highlighted revolutionary prisoners in Europe, Palestine, Turkey, Peru, the Philippines and the United States, including messages from Abdallah and from Palestinian political prisoners. In Berlin, Germany, activists from the Democratic Palestine Committees joined the demonstration organized by Jugendwiderstand, carrying posters demanding freedom for Abdallah, Sa’adat and fellow political prisoners. 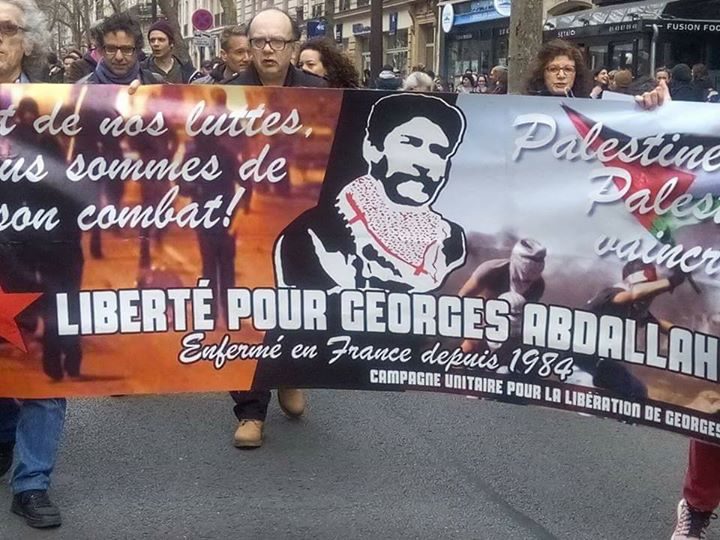 On 19 March, the March for Justice and Dignity, against racism, repression and police violence, gathered in Paris; the participating committees, including the Unified Campaign to Free Georges Abdallah, marched in the large demonstration of thousands, while other campaigners participated in solidarity events across France.