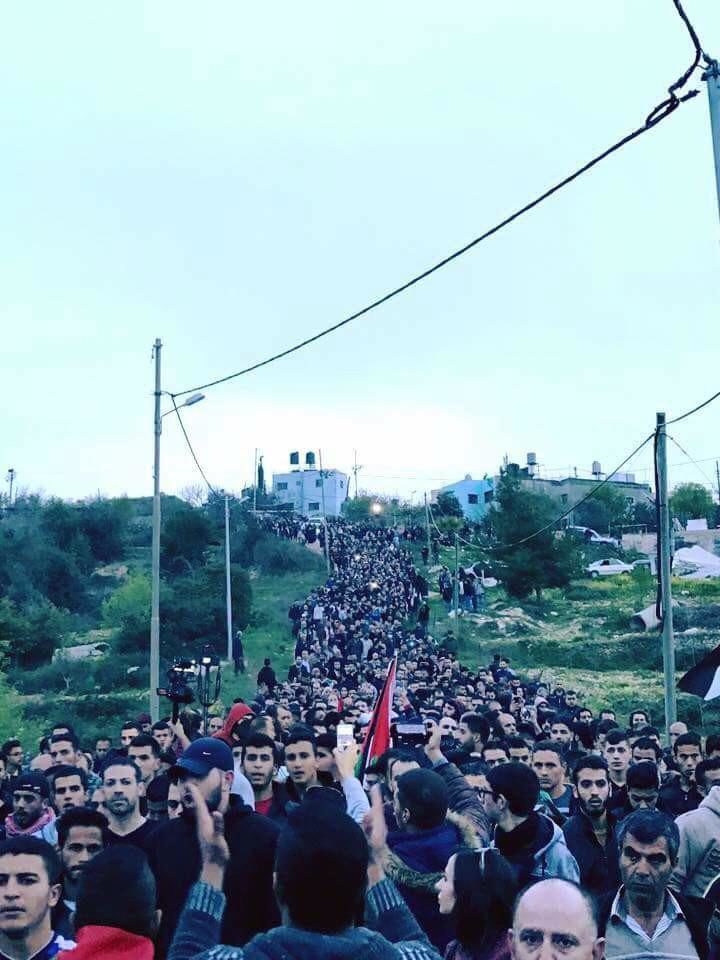 Thousands of Palestinians took to the village streets of al-Walaja, near Bethlehem, on Friday, 17 March in the funeral of slain Palestinian youth leader and activist Basil al-Araj, marking his burial with the waving of Palestinian flags, chants and calls for justice and testimonials of love and resistance by his family, friends and comrades.

Al-Araj’s body had been held captive by Israeli occupation forces since he was shot down in a hail of bullets in the home where he was staying in El-Bireh on 6 March. His family home in al-Walaja had been raided over 10 times as occupation forces sought to capture him after he was released from Palestinian Authority prison in September 2016.

Palestinians traveled to the village to attend al-Araj’s funeral and salute the slain youth leader. His family called for carrying only Palestinian flags, in salute to Basil’s commitment to Palestinian identity and liberation.

Participants chanted against the occupation, its assassination policy and the Palestinian Authority’s security coordination with Israel, saluting al-Araj and his commitment to struggle and resistance.

Al-Araj’s body was returned on Friday afternoon at the “300” checkpoint near Bethlehem, after which it was first taken to the Beit Jala Government Hospital by the Palestinian Red Crescent Society for autopsy. The autopsy documented that al-Araj had been shot by at least 10 bullets and his body had additional injuries from shrapnel and fragments. The cause of death was determined to be a bullet wound to the heart, reported the Palestinian Ministry of Health. In addition to the bullet wound in his heart, al-Araj was shot twice in the upper back, once in the right side of the chest, once in the rib cage, once in the abdomen, once in the liver and once in the spleen, and bullets and shrapnel were also found in his pelvis.  After the autopsy, his body was returned to his family in al-Walaja for the funeral march.

The Popular Front for the Liberation of Palestine, the Palestinian leftist party, “called upon the masses of the Palestinian people to converge in al-Walaja village to attend the funeral of the heroic martyred struggling intellectual Basil al-Araj, as he is buried on Friday, March 17 after his body was kidnapped by the occupation forces after they killed him as he resisted an invasion raid in el-Bireh at dawn on Monday, March 6, 2017. The Front also urged Palestinians to organize rallies on Friday to coincide with the reception of his body and the funeral ceremony of the martyr, as tributes and symbolic funerals.”

Al-Araj, a prominent youth activist, had gone underground following his release from a Palestinian Authority prison after a hunger strike in September 2016; al-Araj and five of his comrades had been arrested by PA security forces in April 2016 in a case touted at the time by PA President Mahmoud Abbas as an important achievement for PA/Israel security coordination. They were tortured and imprisoned for five months without charges before being released after a hunger strike. Four of Basil’s comrades, Haitham Siyaj, Mohammed Harb, Mohammed al-Salameen and Seif al-Idrissi, have now been seized by Israeli occupation forces and are held without charge or trial under administrative detention.