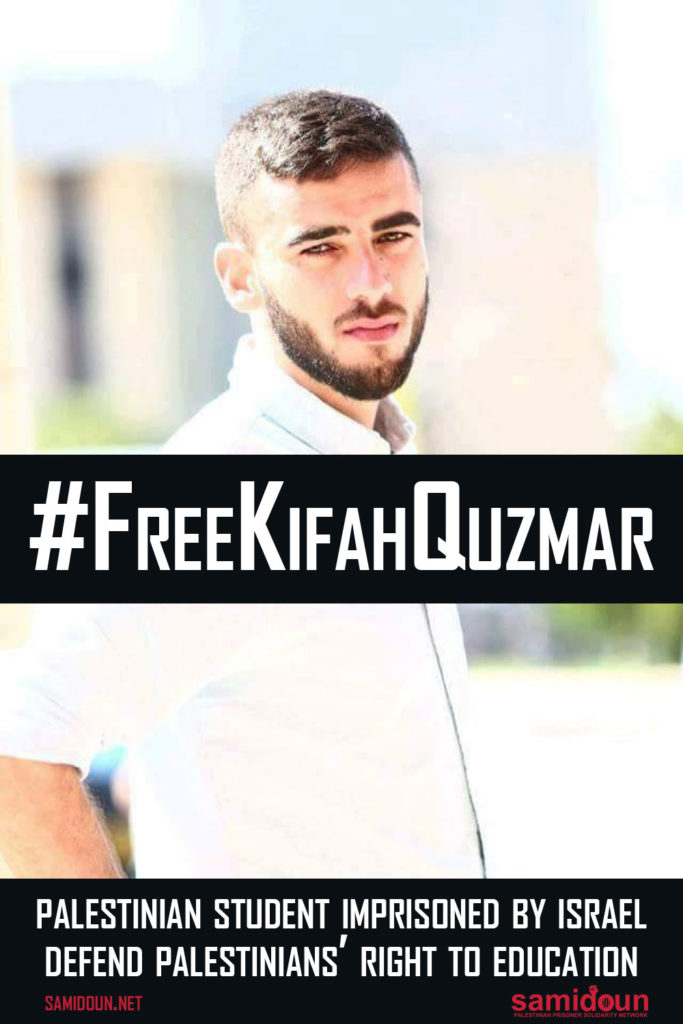 70 organizations around the world have joined the call to action to free imprisoned Palestinian student Kifah Quzmar and his fellow students denied their right to education by Israeli imprisonment and repression. Quzmar, an active student at Bir Zeit University in his final year of study of business administration, was seized by Israeli occupation forces on 7 March at the Karameh/Allenby crossing as he returned from Jordan. He was immediately taken to interrogation which extended for 20 days before he was first allowed to see his lawyer, Anan Odeh. His detention was repeatedly extended, and he was transferred multiple times between four interrogation centers and military courts.

After a four-day hunger strike that he launched at the Israeli occupation military court on Sunday, 26 April, Quzmar’s interrogation was ended and he was transferred to the Ofer prison where he awaits another military court hearing on Sunday, 2 April. He is being threatened with administrative detention, imprisonment without charge or trial that can be indefinitely extended by Israeli military order. Of the nearly 7,000 Palestinian political prisoners in Israeli jails, nearly 600 of them are held in administrative detention, some for years on end through multiple renewal orders.

Signatories of the statement, initiated by student organizations in the United States, Canada, Belgium, the Netherlands, Spain, the UK and Palestine, include the Concordia Student Union, the student union at the large Montreal University, the Palestinian Youth Movement – United States and National Students for a Democratic Society, among dozens of chapters of Students for Justice in Palestine and Students Against Israeli Apartheid.  Additional signatories to the statement, urging freedom for Quzmar and his fellow student prisoners and the academic boycott of Israeli institutions, are welcome.  The statement (also available in Arabic, Dutch, Spanish, Catalan and Portuguese) and its full list of signatories are reprinted below. 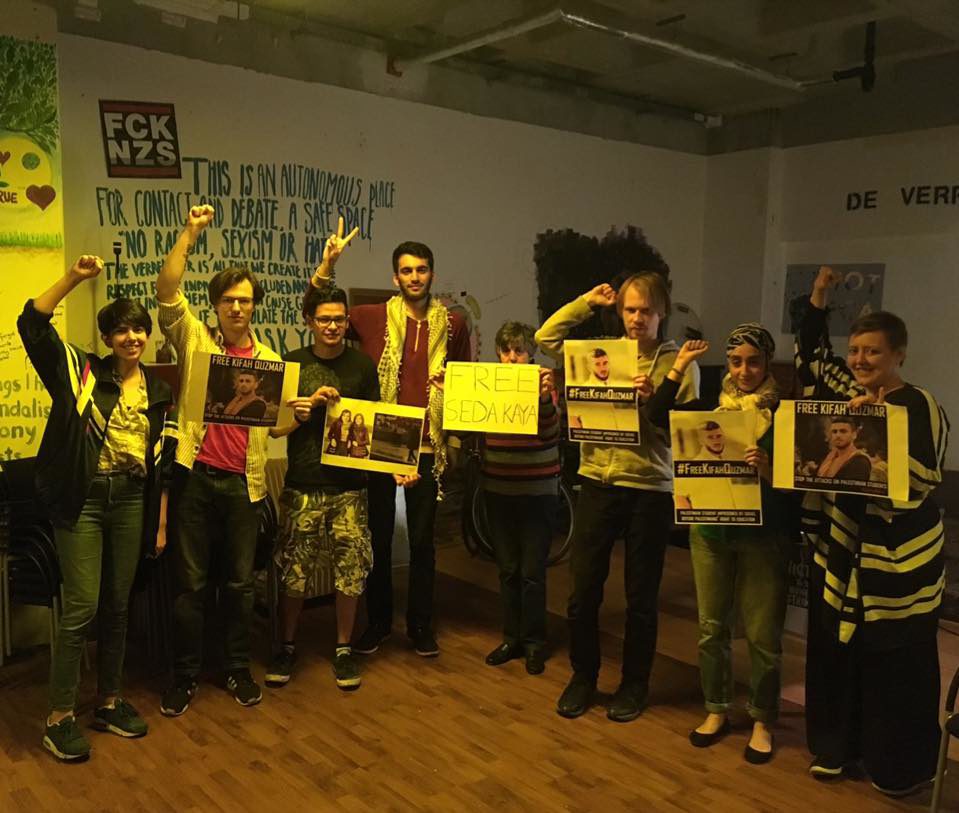 Students for Justice in Palestine in Amsterdam organized an evening event on 30 March, with the participation of Charlotte Kates, international coordinator of Samidoun, and Ekrem Deniz, active in organizing to free Turkish and Dutch political prisoners. The event included discussion of the struggle of political prisoners in Palestine and Turkey, including the case of Kifah Quzmar and the targeting of Palestinian students. Organizers held signs calling for freedom for Quzmar and for youth prisoner Seda Kaya, held in Turkish prison.

Take action! Kifah Quzmar will face a military court on Sunday, 2 April, so action is more timely than ever.

3) Organize a table in a student center or a one-day hunger strike in support of Kifah Quzmar. Fellow students must know about the persecution faced by Palestinian students.

4) Organizations, associations and student unions and groups: write a letter or a statement in support of Kifah, or take a group photo with a sign that says, “Free Kifah Quzmar!” and use #FreeKifahQuzmar on social media. Share your statements and photos on Facebook, or email samidoun@samidoun.net.

5) Join the Boycott, Divest and Sanction Campaign to build the boycott of Israel, including the academic boycott of Israeli institutions. Israeli academic institutions are complicit in the system of imprisonment and occupation, while Palestinian students are denied their normal functioning and right to education by ongoing arrest campaigns.

We, the undersigned student organizations, groups, associations and unions urge all organizations to express solidarity with hunger striker, student and prisoner Kifah Quzmar and his fellow imprisoned Palestinian students and sign this statement:

Kifah Quzmar, 27, and in his last year of study of Business Administration at BirZeit University, was arrested by Israeli authorities on 7th March when returning from a trip at the Karameh/Allenby crossing from Jordan. As of now, no charges or allegations have been made against him. On 26 March he demanded to either be charged with something or released, but instead Israel extended his interrogation for eight additional days. To protest this injustice, the same day he started a hunger strike demanding his release.

The imprisonment of Palestinian students by the occupation is a clear breach of international, human rights and humanitarian law and academic freedom as a whole. The massive use of imprisonment in Palestine is a key weapon of settler colonialism as it attempts to suppress and eliminate Palestinian resistance. We condemn the Israeli Occupation for its grave violations of the International Covenant on Civil and Political Rights (Arts. 14, 17, 18, 19, 22), through its use of imprisonment and of the rights of students to education and to full and active political participation. At BirZeit University alone, 60 Palestinian students are denied access to education because they are held as political prisoners in Israeli jails. Students are repeatedly targeted for arrests, especially as annual student elections approach; activists involved with student political blocs are ordered to administrative detention or accused of support for “prohibited organizations.”

We, the undersigned student organizations, groups, associations and unions, demand the immediate release of Kifah Quzmar and all Palestinian political prisoners. We also demand an immediate end to the imprisonment of Palestinian students, which is a direct impediment of the right to education (International Covenant on Economic, Social and Cultural Rights, Art. 13). At last, we call upon all education institutions, companies and governments to comply with Boycott, Divestment and Sanctions (BDS) in order to pressure Israel in complying to International Law.

We call upon all organizations to express solidarity with Kifah Quzmar and his fellow imprisoned Palestinian students and sign this statement. We refuse to remain silent about the ongoing injustice in Palestine and we stand in solidarity with all Palestinians who are deprived of their unalienable rights of freedom, justice and return.

Palestinian students are being denied their education by the Israeli occupation. International solidarity can help to defend them!