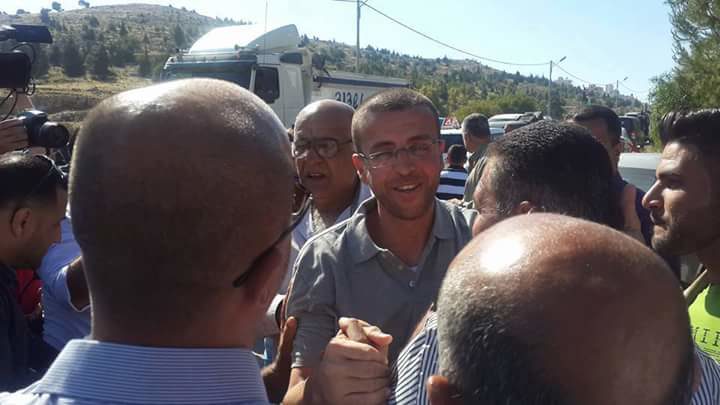 Imprisoned Palestinian journalist Mohammed al-Qeeq, originally scheduled for release on 14 April after three months of administrative detention, is now facing new charges from an Israeli occupation military court, all for public political activity, in an attempt to deny his release secured through a 33-day hunger strike.

Palestinian lawyer Khaled Zabarqah told Wattan that the Israeli occupation military court stated on Sunday, 9 April that it would issue a ruling after 18 April on al-Qeeq’s appeal against his imprisonment, ordered to continue until the end of the military court proceedings against him. He said that the court refused to hear his legal arguments on Thursday and then held an appeal hearing on Sunday at the Ofer military court; al-Qeeq was not present.

Zabarqah emphsized that the Israeli military authorities have proved time and again that the people should have no confidence in any rulings issued by the court, and that this indictment issued against al-Qeeq is yet another proof of their complete disrespect to any commitments made, even before the judicial apparatus. Al-Qeeq ended his hunger strike on the basis of an agreement to not renew his administrative detention – and therefore release him – following the three-month order. He noted that the refusal to hear evidence from the defense was further evidence of the political attack on al-Qeeq.

Al-Qeeq, 35, a Palestinian journalist, was seized by Israeli occupation forces on 15 January as he returned home from a demonstration in Bethlehem demanding the release of the captive bodies of Palestinians killed by Israeli occupation forces. He was previously arrested in 2015 and ordered to administrative detention; he won his release in May 2016 with a 94-day hunger strike that received significant Palestinian and international support.