Palestinian circus performer and trainer Mohammed Abu Sakha has been imprisoned since 14 December 2015, when Israeli occupation forces seized him as he travelled to his workplace at the Palestinian Circus School in Bir Zeit from his hometown of Jenin. He has been held in administrative detention, imprisonment without charge or trial, since that time.

His current administrative detention order is scheduled to expire on 11 June 2017. Addameer Prisoner Support and Human Rights Association reported that a potential extension has been limited to a maximum of three months, following an appeal by his lawyer, Mahmoud Hassan. “The judge agreed to renew the order for three months under the condition of no further renewal,” reported Addameer.

Abu Sakha has trained and performed with the Palestinian Circus School since 2007. He specializes in working with children with special needs and intellectual disabilities in classes at the school; he has traveled the world and participated in numerous circus tours in Palestine and internationally. His tours and training in Europe, the United States and elsewhere have been put on hold due to the repeated extension of his imprisonment without charge or trial, while his students await his return.

Artists and circus performers around the world have organized and campaigned for Abu Sakha’s release, highlighting his case as an example of the over 500 Palestinians imprisoned without charge or trial under administrative detention. He is one of approximately 6300 Palestinian political prisoners and recently participated in the 41-day #DignityStrike within Israeli prisons.

Pallasos en Rebeldia (Clowns in Rebellion), a group of revolutionary circus performers, have performed with the Palestinian Circus School and have organized campaigns for Abu Sakha’s release since the time of his arrest. They have held protests, performances and creative interventions around Spain and internationally to demand his freedom and that of his fellow Palestinian prisoners.

Now, Ivan Prado of Pallasos en Rebeldia is taking a #PeregrinaClown journey from Gijon to Santiago de Compostela, from 29 May to 11 June, performing from city to city and highlighting the case of Mohammed Abu Sakha. Prado is organizing stops, performances and talks in each city along the way, highlighting the case of Abu Sakha and the struggle to end administrative detention.

Prado’s journey will reach Santiago on 11 June, the day of the expiration of Abu Sakha’s current administrative detention order. He is taking the Camino de Santiago, a route that thousands of pilgrims internationally travel to Santiago every year. 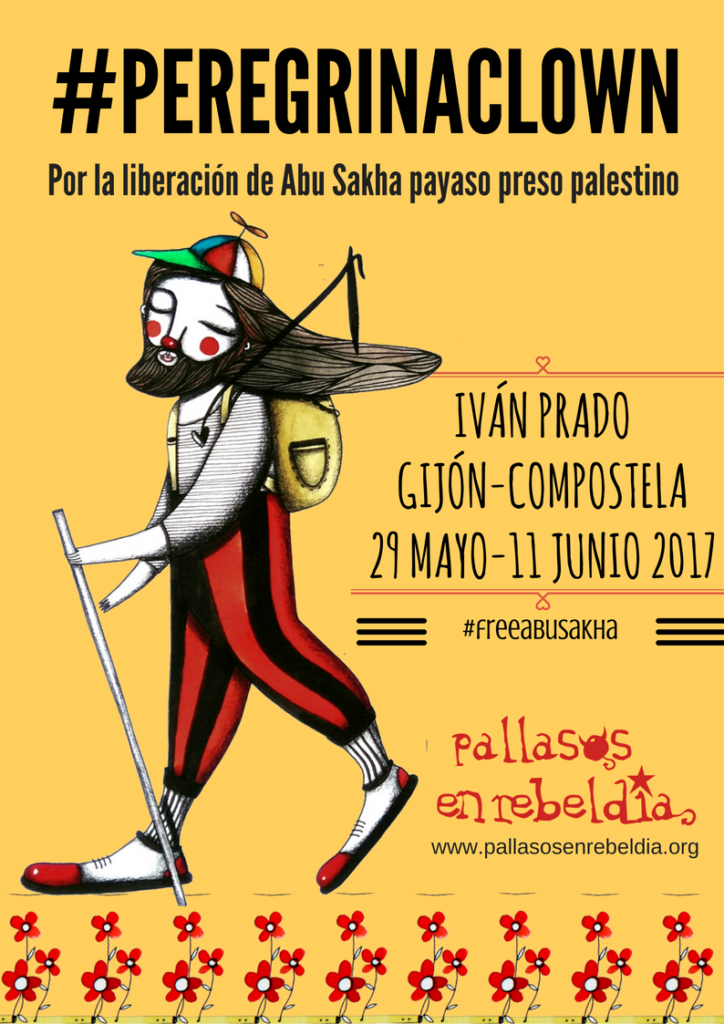 Prado, the international spokesperson of Pallasos en Rebeldia, earlier engaged in a solidarity fast that began on 22 May, in the circus tent of Rivas Vaciamadrid in Madrid, Spain, in support of the Palestinian prisoners’ hunger strike.  “We clowns love freedom, so for Pallasos en Rebeldia, the end of the Zionist occupation is a duty and necessity for all humanity,” Prado wrote.

The solidarity strike, called #HuelgadeAlegrias (Strike of Joy), was part of ongoing solidarity actions by a number of organizations in Madrid taking place since 10 May, where a semi-permanent tent was erected outside the Ministry of Foreign Affairs to support the Palestinian prisoners’ hunger strike. Organizations including Palestina Toma la Calle, Asociación de la Comunidad Hispano Palestina Jerusalén, and RESCOP, trade unions like CCOO, UGT, CGT, and political parties like Izquierda Unida and Podemos participated in the Madrid actions. Numerous events and activities were organized throughout the Spanish state to support the strikers.

Prado has been posting daily updates of his journey on his Facebook page, narrating his travels and events as he goes and highlighting the campaign to #FreeAbuSakha:

On 4 June, he will be in Rabadeo, on 5 June in Mondonedo, on 7 June in Vilalba, on 10 June in Arzua and completing his journey on 11 June in Compostela, where he will be received at 11:30 am at the Santiago City Hall.