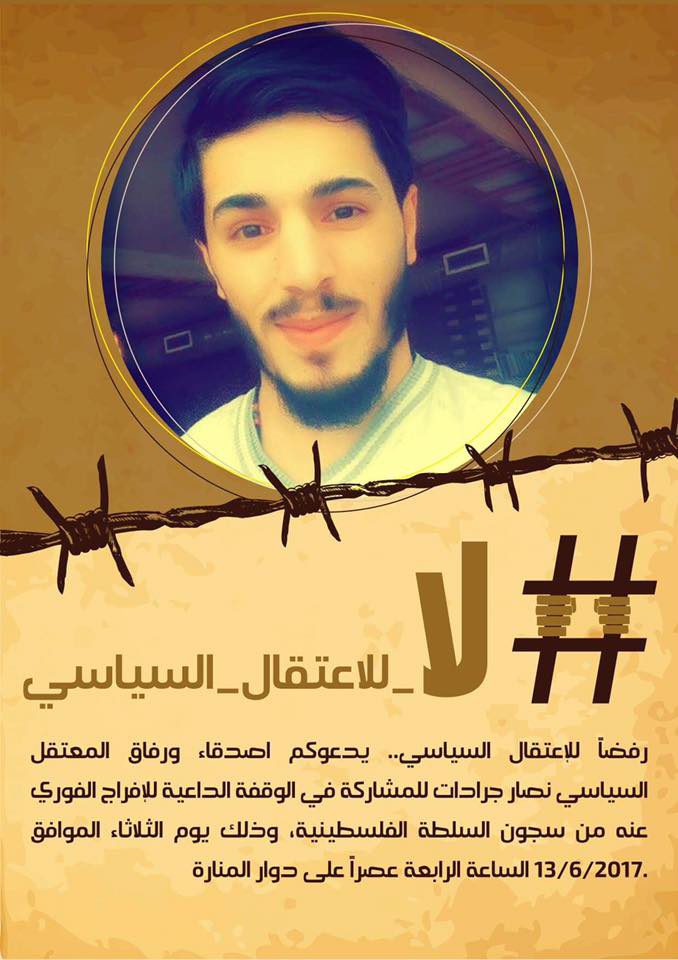 Friends and comrades of Nassar Jaradat, the Palestinian student and youth activist detained by the Palestinian Authority, are planning to rally today, Tuesday, 13 June, in Ramallah, calling for his immediate release. Jaradat, a former political prisoner in Israeli jails, was seized by Palestinian Authority security forces on 8 June following a critical Facebook post he made about PA official Jibril Rajoub‘s comments on Israeli sovereignty over Jerusalem holy sites.

The protest in Ramallah will take place in Manara Square at 4:00 pm.  Samidoun Palestinian Prisoner Solidarity Network has urged the release of Jaradat, and has written letters to Palestinian embassies internationally as well as international parliamentarians to urge his immediate release and an end to Palestinian Authority “security coordination” with the Israeli occupation.

His friends and comrades are maintaining a Facebook page and social media campaign for his release using the hashtags #FreeNassar and #FreeNassarJaradat. 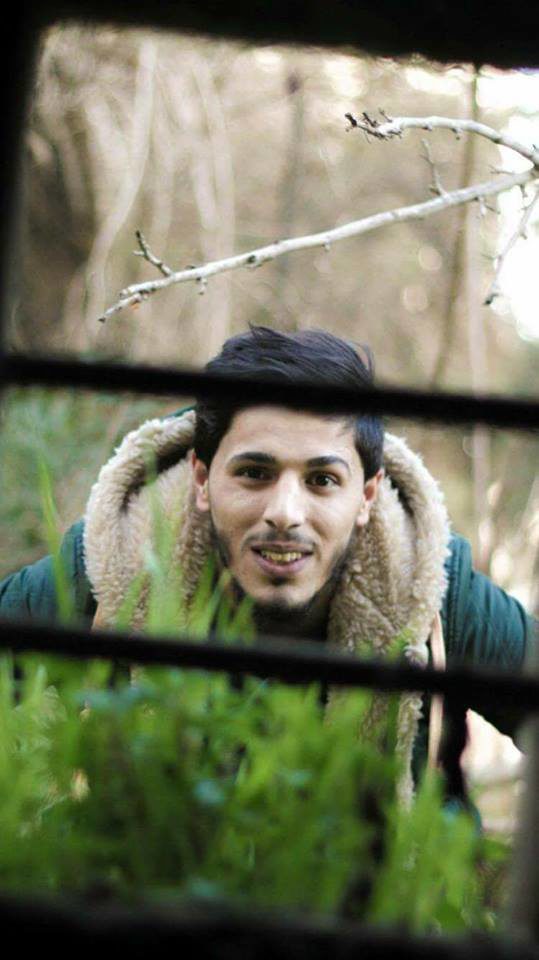 The Union of Palestinian Communities and Organizations in Europe issued a letter on Monday, 12 June to progressive political organizations and hundreds of Members of European Parliament, urging supporters of Palestine to call for Jaradat’s release. “At a time when the Israeli occupation launches daily arrest campaigns against Palestinian cadres and Palestinians resisting the occupation, the Palestinian Authority Preventive Security Service arrested youth activist Nassar Jaradat in Ramallah, confiscating his right to freedom of expression,” said Dr. Fawzi Ismail, president of the Union.

Leftist Palestinian political party, the Popular Front for the Liberation of Palestine, also demanded Jaradat’s release and that of all political detainees in PA prisons. “The Authority should be holding accountable and arresting those who disregard and undermine the fundamental rights of the Palestinian people, not those who criticize the policy of security coordination and the Palestinian Authority’s political direction and leadership,” said the PFLP.

Jaradat’s case has again focused attention on ongoing political arrests by the Palestinian Authority, especially in the context of security coordination with the Israeli occupation. Protests against security coordination have mounted especially since 6 March, when Palestinian youth organizer and former PA political prisoner Basil al-Araj was assassinated by Israeli occupation forces in a home in Ramallah where he was staying after being pursued by occupation forces since his release by the PA. His original arrest and that of his comrades had been trumpeted by PA officials, including PA President Mahmoud Abbas, as a victory of security coordination.

Meanwhile, on Monday, 12 June, the Hamas movement also issued a statement on security coordination and PA political detention. Two Palestinians, Muath al-Khatib and a lawyer, Ibrahim Abu Salim, were detained in the town of Rantis by Palestinian Authority security forces in pre-dawn raids timed to coincide with another raid by Israeli occupation forces, who arrested two more Palestinians.  Meanwhile, Izzadine Freihat was once again detained, only two months after his last release from PA prison, as was his father. Freihat, a university student, went on hunger strike after 40 days of his previous detention in PA prison.

The family of Fayez Nafez also spoke to Quds News, saying that PA intelligence services have repeatedly raided their home without stating a reason and have broken the main gate and damaged their belongings and caused a great deal of fear with their late-night raids, demanding that the security forces stop harassing their son.

1. Email the Palestinian Embassy or PLO Mission in your country. Click here for a list of contact information. Make it clear that Palestinians around the world and international activists stand together to confront occupation, end security coordination, and free Nassar Jaradat and fellow political detainees.