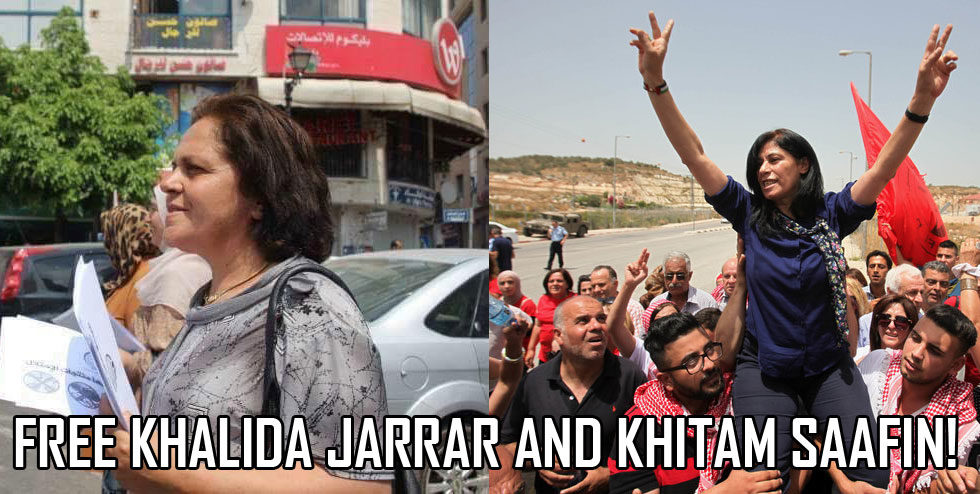 No evidence was brought forward; instead, the military prosecution demanded more time to investigate the five computers seized from Jarrar’s family home.

Saafin and Jarrar were seized by Israeli occupation forces who invaded their family homes in the Ramallah area in pre-dawn raids on 2 July 2017. They recounted the experience of the raids to Addameer lawyer Muna Naddaf, who said that the two were taken to Ofer military court for interrogation after being seized. Both were only interrogated for 30 minutes before being placed in a small room with no windows for four hours. By 4:00 pm on the same day, the two were transferred to HaSharon prison, one of the two prisons where dozens of Palestinian women are held.

Khalida Jarrar is a prominent Palestinian national leader. A leftist, feminist parliamentarian in the Palestinian Legislative Council, she is also vice-chair and the former executive director of Addameer Prisoner Support and Human Rights Association as well as chair of the PLC’s Prisoners Commission. She has been repeatedly targeted by Israeli occupation forces and was most recently arrested on 2 April 2015 and imprisoned until June 2016. Jarrar’s imprisonment – including one month in administrative detention without charge or trial – was met with worldwide protest and outrage.

Khitam Saafin is the president of the Union of Palestinian Women’s Committees who is well-known in the Palestinian, Arab and international arenas for her organizing and leadership in the Palestinian women’s movement. She has participated on multiple occasions in the World Social Forum, linking together women’s struggles around the world for national and social liberation.

The re-arrest of Jarrar and Saafin has been met with international protest once again. The Communist Party of Spain, the Landless Workers Movement (MST) of Brazil, the Hellenic Union of Progressive Lawyers, the Communist Party of Brazil, Coup Pour Coup 31, Plate-Forme Charleroi-Palestine, Marche Mondiale des Femmes France, the Kuwaiti Progressive Current, and the Union do Povo Galego, among others, have already issued statements of solidarity in support of Jarrar and Saafin.

In Lebanon, 50 Lebanese figures urged parliamentary solidarity with Jarrar in an event widely attended by Palestinian and Lebanese organizations and political forces, emphasizing the importance of solidarity to demand freedom for imprisoned Palestinian political leaders. In Manchester, people organized a protest on 4 July against the band Radiohead, urging it to cancel its performance in Tel Aviv in line with the Palestinian call for cultural boycott of Israel; protesters demanded the release of Jarrar, Saafin and their fellow Palestinian prisoners. Upcoming protests are planned in Berlin, New York City and elsewhere.