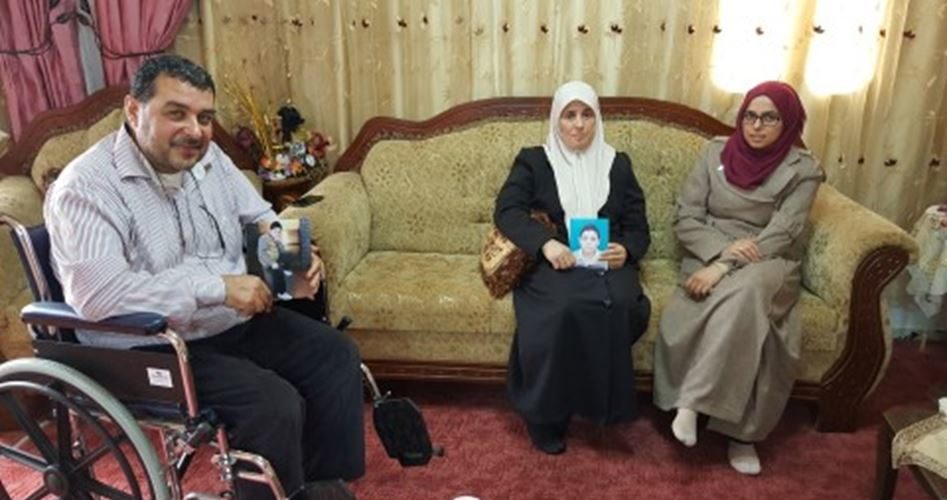 On Thursday, 19 October, the Salem military court extended the detention of Anas Hamarsheh, 17, from the village of Ya’abad near Jenin, until next Tuesday, despite his need for ongoing medical care, said his sister Laila Hamarsheh to Wattan TV.

No charges have been issued against the boy, who was seized on Sunday, 8 October in a pre-dawn raid in which Israeli occupation forces invaded the family home. However, his sister stated that “we have learned that the arrest took place in the context of stone throwing.” Stone-throwing charges are some of the most frequent allegations used by the Israeli occupation when jailing Palestinian child prisoners, who overwhelmingly report experiences of threats, abuse, beatings and other forms of physical and psychological torture under interrogation.

Anas, a high-school student, is held in the Jalameh/Ketziot interrogation center at present. He suffers from osteonecrosis of the hip and requires treatment; he is in danger of losing his ability to walk. One leg is shorter than the other and he has difficulty running or playing sports; his leg is also at risk of infection.

He is the son of former prisoner Adnan Hamarsheh, who spent 11 years in Israeli prisons; Anas’ mother, Reem, was also imprisoned for eight months. His parents noted that they told the occupation forces when they took their son that they bear responsibility for any consequences from the arrest of Anas, as he urgently needs physiotherapy and other treatment as well as a special diet.

“Since his arrest, Anas has been transferred to the Jalameh interrogation center by the Israeli occupation. After several days in detention, the Israeli occupation extended his detention for eleven days. He is in a very tough condition now, based on my own experience in detention. His situation is contrary to the fact that he is still a child and should be at school, and not in the interrogation cells,” said his father to the Palestine Information Center.

Hamarsheh noted that this issue has special significance to the family due to his own experience in Israeli prisons. He suffered a series of strokes on 17 February 2014 while under Israeli interrogation; after two days of hospitalization, he was returned to the prison. He was transferred several times between the hospital and the prison, losing vision and balance. He was not charged and was instead ordered to six months in administrative detention. Since that incident, he has used a wheelchair due to his balance problems and difficulty walking and has been denied the right to travel to receive medical treatment.

“The aggressions of the occupation would only increase our steadfastness in our land and our right to it. The occupation always seeks to break the will of all the families that believe in resistance to liberate Palestine,” said Hamarsheh, noting that he sees the arrest of their youngest son as part of a systematic and ongoing attack on the family.