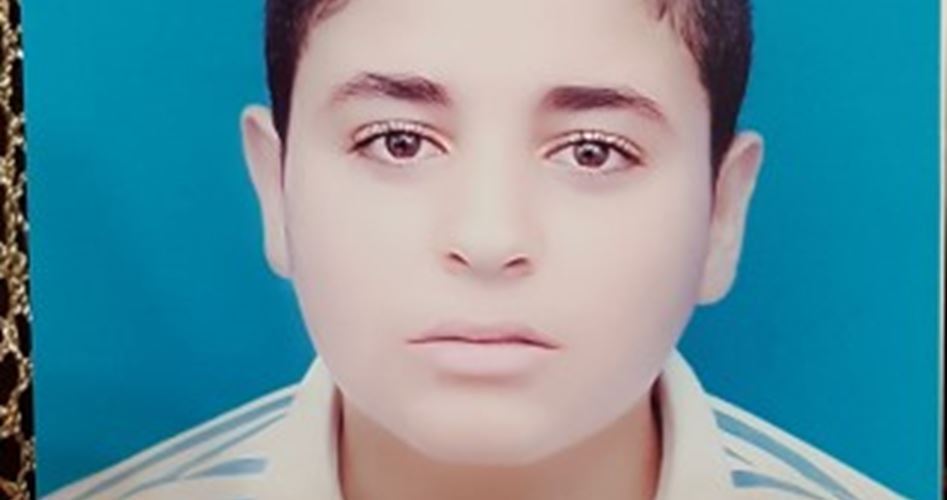 Palestinian child prisoner Anas Hamarsheh, 17, has reportedly lost the ability to walk; his family have repeatedly warned of the severe dangers to his health in Israeli prison as he suffers from a rare condition that requires treatment.

Asra Voice reported that Anas, 17, from the town of Yabad near Jenin has lost the ability to walk for several days and that his health condition is dangerous. His family has urged his release; he is held in Megiddo prison awaiting a sentence from the military courts.

Leila Hamarsheh, Anas’ sister, said that she had received the troubling news about his health situation and a sudden decline that has made him unable to stand. His family notes that he has not been provided with treatment and that when he was taken to the Ramle prison clinic, his foot was scanned but no treatment was provided. After three days in the Ramle prison clinic he was returned to Megiddo with no prescription or treatment plan.

He suffers from osteonecrosis of the hip and requires treatment; he is in danger of losing his ability to walk. One leg is shorter than the other and he has difficulty running or playing sports; his leg is also at risk of infection.

Anas’ father, Adnan Hamarsheh, uses a wheelchair after he suffered a series of strokes in 2014 while under Israeli interrogation. After two days of hospitalization, he was returned to prison; he was not charged and instead ordered imprisoned for six months under administrative detention. Since his release, he has been denied permission to travel to receive further treatment.

Anas is one of over 350 Palestinian children imprisoned in Israeli jails; each year, approximately 700 children are brought before Israeli military courts. The vast majority of imprisoned Palestinian children have reported physical and psychological abuse under interrogation, denial of access to family members or lawyers and other forms of cruel and inhumane treatment in violation of the Rights of the Child.

There are a number of other seriously ill Palestinian prisoners in Israeli prisons, including cases like that of Israa Jaabis, seriously wounded and provided with insufficent treatment that daily increase her suffering; there are also cases like that of Mohammed Ahmed Khatib, 47, who is reportedly unable to walk after receiving a botched injection for pain in his side.  Hussein Hosni Atallah, 57, from the Balata refugee camp in Nablus, was denied early release despite a severe deterioration in his health. He has metastatic cancer in his lungs, spine, pancreas, liver and head and is held in the Ramle prison clinic.