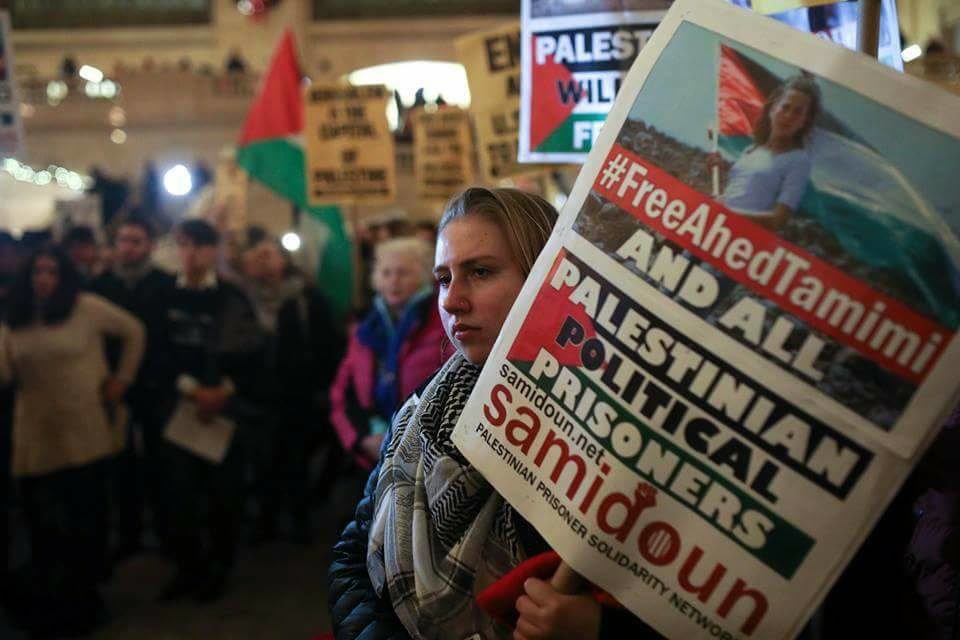 “This rally showed the broad unity Ahed has inspired here, with every organization in solidarity with Palestine standing together to support her and demand her freedom,” said Joe Catron of Samidoun. “Her detention is a crucial test for all supporters of the Palestinian national and prisoners’ movement. Israel’s attacks on Nabi Saleh, the Tamimi family and Palestinian children are atrocities we must continue to confront.”

Ahed’s case – and that of her family members, including her mother, Nariman, currently imprisoned alongside her daughter, and her cousin, Nour, recently released but still facing charges by an occupation military court – has attracted worldwide attention. Ahed and her family are leaders in the anti-colonial indigenous resistance and land defense movement in Nabi Saleh, their village of approximately 600 Palestinians that has been subject to land theft, invasions and extensive violence at the hands of Israeli occupation forces and settlers. Even the village’s spring was seized by the illegal settlement of Halamish. While both Ahed and her mother are held in HaSharon prison, they are isolated from one another and Ahed’s cell has reportedly been freezing in winter temperatures.

Ahed has been charged with 12 charges in an Israeli occupation military court after she slapped an occupation soldier – following the soldier slapping her first – who was on her family’s land and seeking to shoot down at protesters in the village below. The soldier was part of the same unit of occupation forces that had, shortly before, shot her cousin Mohammed Tamimi, 15, in the head with a rubber-coated metal bullet, causing serious damage and leaving him in a coma for days.

Samidoun organizers in New York worked with CODEPINK and other organizations to build a coalition and outreach to other organizations, especially following the successful NY4Palestine rally on 22 December in support of Ahed and fellow Palestinian prisoners. The rally was joined by an exceptionally broad number of groups in New York City with 32 endorsing groups, including Al-Awda NY, NYC Students for Justice in Palestine, Labor for Palestine, Decolonize this Place, Jewish Voice for Peace, the National Lawyers Guild, International Action Center, ANSWER, BAYAN USA, the Committee to Stop FBI Repression, Black4Palestine and many more.

“Israel’s anger at Ahed, their hell bent intention to destroy her, comes from her refusal to submit to their occupation,” said CODEPINK National Director Ariel Gold. “Rather than lowering her eyes in compliance, Ahed stands up to the army, unafraid, and demands her rights. She is accused of slapping a soldier. But Israel, not Ahed, is the real criminal.”

Participants noted the strong, positive reception they received throughout the rally, which was emceed powerfully by Nerdeen Kiswani of NYC Students for Justice in Palestine. Participants chanted for freedom for Ahed and for all of Palestine, and passers-by noted their familiarity with Ahed’s case, supporting her demands for freedom and expressing their solidarity with Palestinians, especially around the issues of the arrest and imprisonment of children and U.S. President Donald Trump‘s declaration purporting to recognize Jerusalem as the capital of Israel. The chants and the speeches reverberated around the busy station through a megaphone throughout the protest.

“Ahed is only 16 years old and she is sitting in jail,” said Kiswani from NYCSJP. “Palestinians have not only the right to resist their oppression, but the obligation. Ahed is one of many children being detained and tortured in Israel’s military courts. It’s an apartheid system. We are out here today and we will be out here in solidarity as long as Israel continues to imprison Ahed and her mother.”

There were a few isolated counter-protesters from the extreme-right, racist Jewish Defense League, which held Israeli flags and a sign calling to “Jail Ahed.” Their miniscule presence did nothing to detract from the power of the mobilization throughout the station. At one point in the rally, participants collectively read out facts about Ahed, the Tamimis, Nabi Saleh and the escalating attacks on Palestinians by the Israeli occupation following Trump’s Jerusalem delegation from a series of placards. The concept was inspired by NYC Shut it Down, a Black Lives Matter organization that protests every Monday evening in Grand Central and other locations against police killings. NYC Shut it Down activists worked together with John and Lydia of Samidoun to organize this part of the action.

Joe Catron, Samidoun’s U.S. Coordinator, spoke at the rally about Ahed’s 17th birthday, forthcoming on 31 January and urging mobilizations around this day to demand her freedom and that of fellow Palestinian prisoners. Announcements will be forthcoming from multiple organizations to build for these events and actions.

On Monday, 8 January, Samidoun activists will not be holding their regular protest because they will be participating in two events to honor Erica Garner, the activist, organizer and daughter of Eric Garner, killed by New York City police, who passed away recently from a heart attack. The public memorial service for Erica Garner will take place at 5:00 pm on 8 January at First Corinthian Baptist Church, which will be followed by a People’s Monday action for Erica Garner by Shut it Down NYC beginning at 116th and Lenox.

The New York protest was one of a number of protests taking place over the weekend and in the coming days in solidarity with Ahed Tamimi and the Palestinian people, including actions in Paris, Vienna, Berlin, Manchester, Glasgow, Edinburgh, Dundee, London, Los Angeles, Dallas, Bratislava, Saint-Etienne, Sydney, Dublin, Madrid, Toulouse, Washington, DC, Johannesburg, Arlington and elsewhere.

Samidoun Palestinian Prisoner Solidarity Network denounces the ongoing imprisonment of Ahed and Nariman Tamimi, among over 500 Palestinians arrested by Israeli occupation forces following U.S. President Donald Trump’s declaration of recognition of Jerusalem as the capital of Israel. Issa Qaraqe of the Palestinian Prisoners Affairs Commission stated that approximately half of those detained, like Ahed, Abdul-Khalik Burnat and Fawzi al-Junaidi, are children. There are hundreds of Palestinian children jailed by Israel and frequently subject to beatings, abuse, and interrogations without parents or lawyers present in violation of the law. We urge people of conscience around the world to take action to demand freedom for Ahed and her fellow detained and jailed Palestinian children in occupation detention centers, interrogation centers and prisons – and for the Tamimi women and all detained and imprisoned Palestinians.