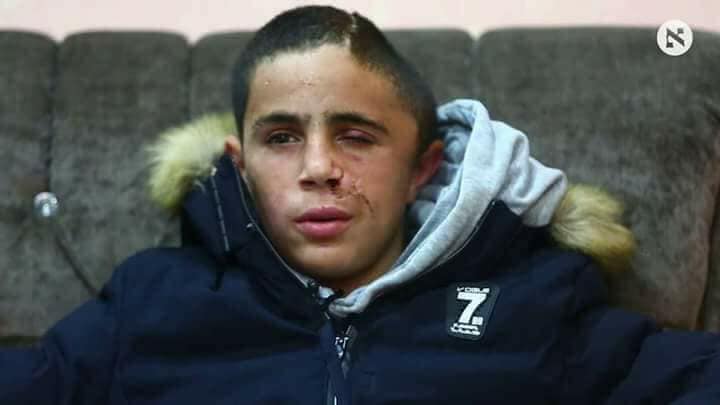 UPDATE: Bilal Tamimi reports that Mohammed Fadel Tamimi, 15, has been released as of 1 pm CEST! We urge the immediate release of all of his fellow detainees.

Mohammed Fadel Tamimi, the 15-year-old Palestinian boy previously shot in the face and severely wounded by an Israeli occupation soldier’s rubber-coated metal bullet in December 2017, was seized by occupation forces in mass raids on the village of Nabi Saleh along with his brother and other relatives. Twenty-two Palestinians were seized by occupation forces in night arrests and early-morning raids throughout occupied Palestine.

Tamimi also reported that the home of Naji Tamimi was raided by occupation forces who declared they were looking for his son, Anan; “the Shabak officer told him that Nabi Saleh is going to suffer more and to expect more brutal attacks,” Tamimi said.

The shooting of Mohammed, 15, happened shortly before Ahed Tamimi confronted occupation soldiers on the family’s land, slapping one of them (after being slapped herself) and demanding they leave their land. Ahed and her mother, Nariman, who filmed the incident and broadcast it live on Facebook Live, have been in prison for over two months for charges related to those events. Their imprisonment and targeting for involvement in the indigenous, anti-colonial land defense movement in Nabi Saleh has sparked and inspired hundreds of protests around the world demanding freedom for Ahed, Nariman and their fellow Palestinian prisoners.

Mohammed continues to be in a precarious health situation and is scheduled for major surgery in May to replace and repair the missing one-third of his skull. Manal Tamimi reported that he is scheduled for his next surgical appointment on 3 March. He spent nearly a week in a medically induced coma after being shot by occupation forces and was previously seized when he was 13 years old. Palestinian children and youth seized by occupation forces overwhelmingly report mistreatment, torture and abuse, including threats of physical and sexual violence against them and their family as well as routine kicking, beating and other physical abuse. Such attacks are always damaging to the targeted children but could have particularly devastating consequences for someone in such a fragile health situation. There are currently approximately 350 Palestinian children in Israeli jails and each year, nearly 700 Palestinian kids are brought before Israeli military courts with a conviction rate of 99.74 percent.

The Tamimi family has been targeted repeatedly for raids and arrests; while this has been the case for years, especially as their village has faced land theft and encirclement and even the theft of their water spring by the illegal Israeli settlement of Halamish, it has escalated even more since the imprisonment of Ahed and Nariman. On 23 February, Manal Tamimi reported that her sons Osama and Mohammed Tamimi were attacked in Ofer prison by Zionist guards. Both Osama and Mohammed were seized in recent attacks on the village. The next military court hearing for Ahed and Nariman Tamimi is scheduled for 11 March.