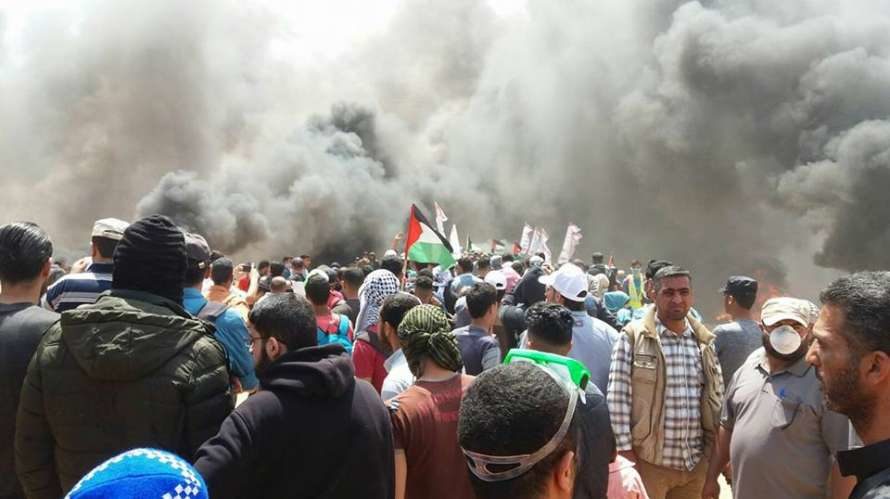 The 70th anniversary of the Nakba was marked with a massacre in Gaza on Monday, 14 May. Israeli occupation forces shot 43 Palestinians dead as they marched for their Return, their right denied for over 70 years of Nakba, colonization and displacement. Thousands of Palestinians continued the ongoing legacy of 70 years of resistance as the Great Return March continued in Gaza today. UPDATE AS OF 15 MAY – Israeli occupation forces killed 58 Palestinians and wounded over 2200 as they marched for return on 14 May in Gaza.

The Zionist military forces exemplified the violence of 70 years of Nakba today, killing 43 and wounding over 1,600 Palestinians as they marched to the colonial fence at the 1948 armistice line, delineating the arbitrary enclave into which Palestinian refugees were ethnically cleansed by Zionist militias, and later the Israeli army.

Simultaneously, the U.S. imperialist role in Palestine was also highlighted as the U.S. embassy officially moved to occupied Jerusalem in an attempt to declare the occupied city the capital of the Israeli occupation state. U.S. officials and Ivanka Trump celebrated colonialism in Jerusalem while occupation forces committed a massacre in Gaza. Meanwhile, European powers remained largely silent and actively complicit, repressing Palestinian and solidarity organizing internally as they greet the Israeli state, congratulating it on 70 years of ongoing Nakba.

The Palestinian people have never stopped resisting – not through 30 years of British colonialism and not through 70 years of Nakba. The Great Return March continues tomorrow despite the bloodshed of the occupier. The martyrs whose lives were stolen today by colonial armies live on in the struggle of millions of Palestinians to make the slogan and the dream of return a reality on the ground, with the bravery and commitment of the Palestinian popular classes on the front lines. Many of them children and youth, these Palestinians were shot down because they marched for their inalienable right to return to, and liberate, Bir Saba, Haifa, Yafa, Safad, al-Majdal, Bisan, all of the over 400 destroyed villages of the Nakba.

Samidoun Palestinian Prisoner Solidarity Network urges all supporters of Palestine and the Palestinian people to take to the streets. Silence is unacceptable in the face of massacres, colonization and complicity. The Palestinians whose lives were taken today and the thousands more wounded must be honored with struggle and commitment to the liberation of all of Palestine and its people, from the river to the sea, the dismantling of Zionist colonialism, and the return of the Palestinian refugees.

Remember them and honor their names, their sacrifice and their struggle for return and liberation. They are immortal to all of our global movements for justice:

Take action and join the protests:

Send your events and actions to us at samidoun@samidoun.net or on Facebook to tell us about your actions in response to the massacres in Gaza and in support of the Palestinian people.

See our constantly-updated calendar of events!