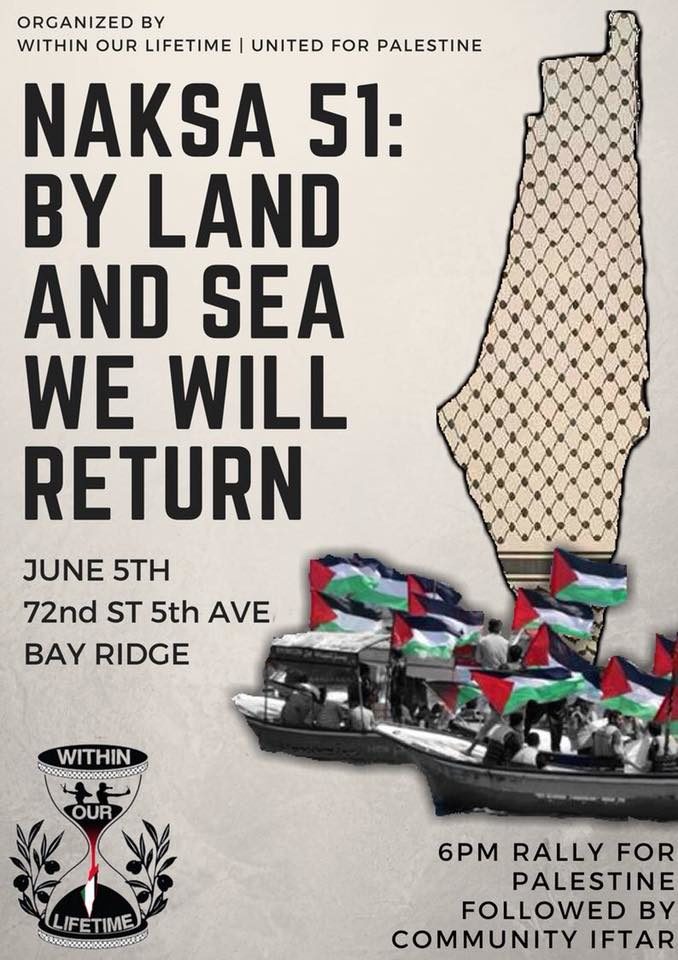 ALL OUT ON JUNE 5TH – IN COMMEMORATION OF AL-NAKSA AND IN SUPPORT OF THE GREAT RETURN MARCH! BY SEA, BY LAND, FROM DIASPORA, WE WILL RETURN

Join Within Our Lifetime | United For Palestine on 72nd Street and 5th Avenue in Bay Ridge as we commemorate 51 years since al-Naksa. On June 5th, 1967, following the conclusion of a six day war that Israel started, Israel took control of the West Bank and Gaza, the 22% of Palestinian land it had failed to capture in 1948. Israel razed to the ground countless homes and villages, and 400,000 Palestinians were added to the nearly million refugees displaced during the Nakba. Approximately half of these Palestinians were being displaced for the second time in less than 20 years. As we pass the 70th anniversary of the Nakba, and 51 years since the Naksa, we acknowledge this ethnic cleansing campaign continues to this day, as the Zionist state guns down Palestinian protestors partaking in the Great March of Return, demanding an end to the siege of Gaza and the right to return to their homes. As Israel continues its genocidal campaign, we continue our resistance. Earlier this week, the bravery and resiliency of the Palestinian people was exemplified by those in the Great March of Return who heroically broke Israel’s siege of Gaza by boat in the Freedom Brigade.

Palestinians will return to our homes, villages, and land! Let us join to make our voices heard from New York City to Gaza, for all of historic Palestine, until liberation.

After the rally, we will be hosting a community iftar. Location to be announced!