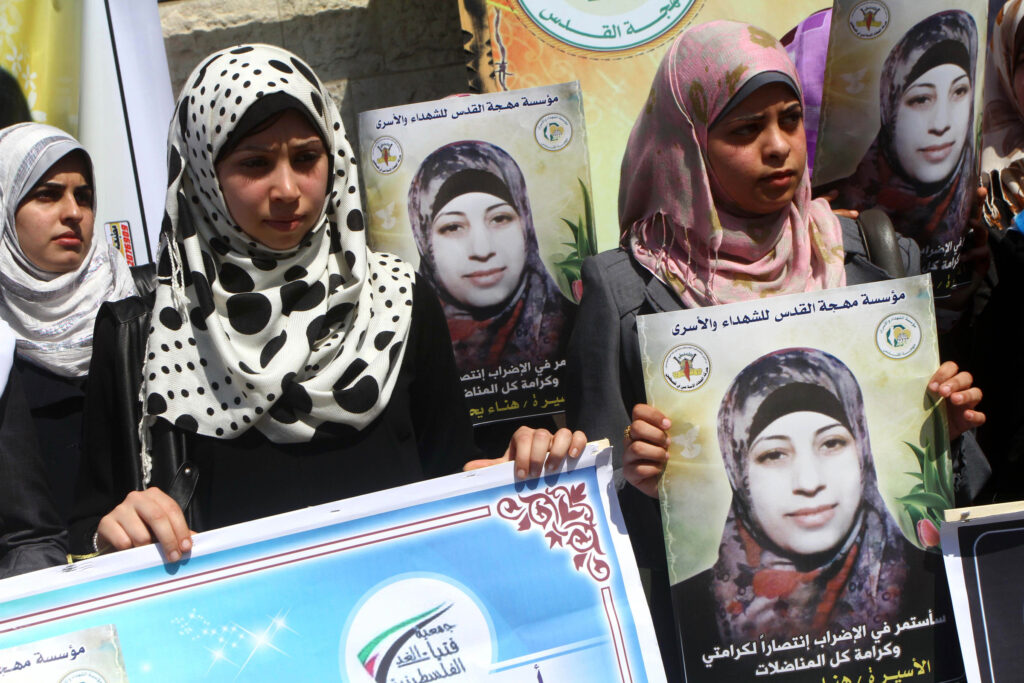 There are approximately 62 Palestinian women prisoners in Israeli prisons, including 17-year-old Ahed Tamimi, who was refused early release on 6 June in the latest decision of the Israeli military courts – the same day her cousin was shot dead by Israeli occupation forces. The decision came as no surprise, especially as Israeli occupation repression directed at the Tamimi family and their resistance to land confiscation and settlement building in Nabi Saleh has only escalated since the imprisonment of Ahed and her mother, Nariman. The Shin Bet had earlier recommended that Ahed be denied early release on the grounds that she has a “dangerous ideology” and should remain imprisoned to deter others.

Ahed, then 16, and her mother, Nariman, were seized on 19 December by Israeli occupation forces after a video was widely publicized of Ahed slapping an Israeli occupation soldier, demanding he leave her family’s occupied land in Nabi Saleh, the village near Ramallah. The Tamimi family has continued to face massive repression, including the imprisonment of a number of young people of the family and the assassination of Izzadine Tamimi in a so-called arrest raid on 6 June.

The 62 prisoners include several administrative detainees held without charge or trial, including Palestinian parliamentarian Khalida Jarrar, whose detention is scheduled to expire on 30 June. Organizers are urging action to demand that her detention not be renewed once more; arbitrary administrative detention orders can be renewed repeatedly by occupation forces.

Imprisoned Palestinian women are held in HaSharon and Damon prisons and continue to face repressive actions from occupation guards. The women in HaSharon prison told Palestinian lawyer Hiba Ighbariyeh during a prison visit that the administration was reducing the number of meals and amount of food provided, referring to a “new system” in all of the prisons.

They also said that the food was of poor quality and unfit for consumption and that they had to purchase the majority of their food from the so-called “canteen,” the prison store. In addition, they reiterated their opposition to the “bosta,” the vehicle used to transfer prisoners to the military courts. Prisoners are shackled on metal benches for lengthy periods of time and are often denied water or the chance to use the bathroom for hours. The journey can take a day or more, despite being a relatively short distance, due to repeated stops and transfers.

A member of the city council of al-Khalil Municipality, Owawi, 39, is also the mother of three children. She is a longtime activist for Palestinian rights and for the freedom of Palestinian prisoners. During her election campaign, she received phone calls attributed to Israeli intelligence demanding she withdraw from the elections and threatening her with arrest. Two of her brothers, Ali and Ahmed, are former prisoners who have spent a total of 10 years behind bars.

In addition, the Salem military court extended the detention of student prisoner Ola Marshoud, 21, from Balata refugee camp east of Nablus, until 1 July 2018. Marshoud, a student at An-Najah University in Nablus, is in her fourth year of studies in the College of Information. She was seized on 11 March 2018 after being called to the Huwwara checkpoint and military installation for interrogaion. She is being imprisoned on allegations related to her involvement in student organizing and campaigning at the university; there are approximately 300 Palestinian university students in Israeli jails, many of them imprisoned for their student advocacy.

In addition, on 29 May, occupation forces invaded the Beit Ummar home of Fida Akhalil, 23, a former Palestinian political prisoner and a student at al-Quds Open University. They used a device to forcibly remove the home’s door and brandished weapons in her family’s face. She was recently released after 6 months in Israeli prisons.