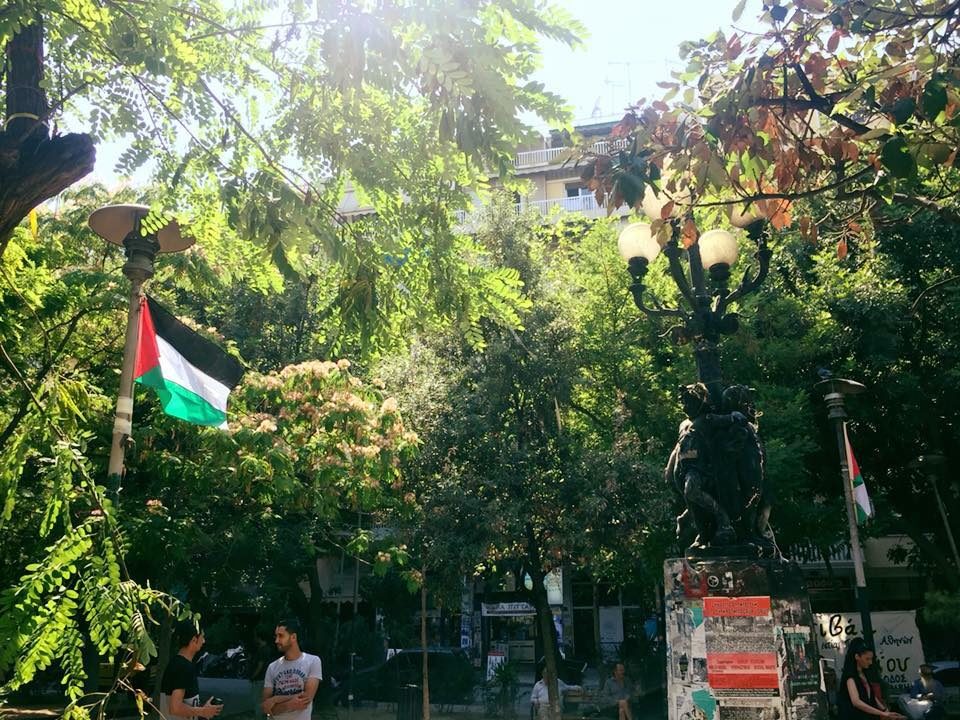 Palestinian youth organizers in Greece held a volunteer day in Exarchia Square in Athens, organized by the Jafra Youth Foundation and Samidoun Palestinian Prisoner Solidarity Network on 26 May. Activists hung Palestinian flags from poles in the square, long a center of social activism and organizing in the city as well as a space for marginalized people.

They swept and cleaned the areas where trees are planted as well as applying fresh coats of paint to the ledges surrounding the square. In addition, they planted flowers and other greenery in some of the areas of the square that were plain soil and empty of plants. 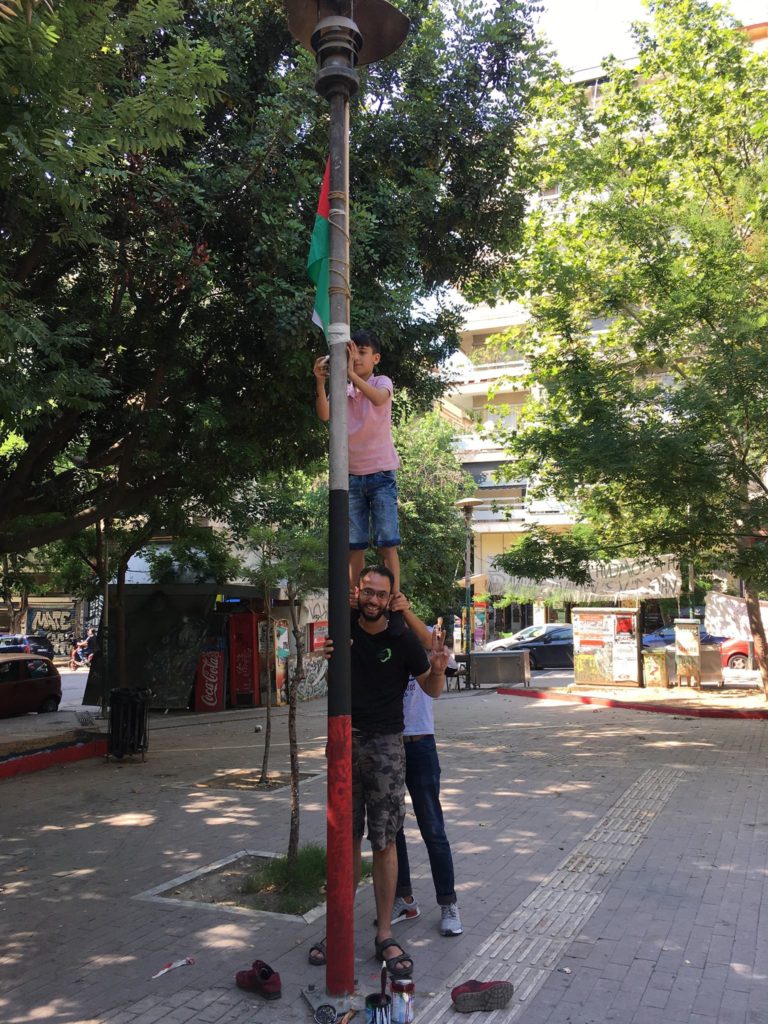 Mohammed Khatib, the Europe coordinator of Samidoun, noted that there has been increasing social pressure on the community in and around the square, which has become a place where many Syrian and Algerian refugees living without homes have taken refuge. There has been an increase in the drug trade and growing tensions between dealers and the homeless residents of the area. He noted that the square action is part of a series of initiatives that Palestinian and Arab organizers are planning to support the Arab community in the area as well as marginalized Greek residents, including film screenings and food distribution of cooked meals. 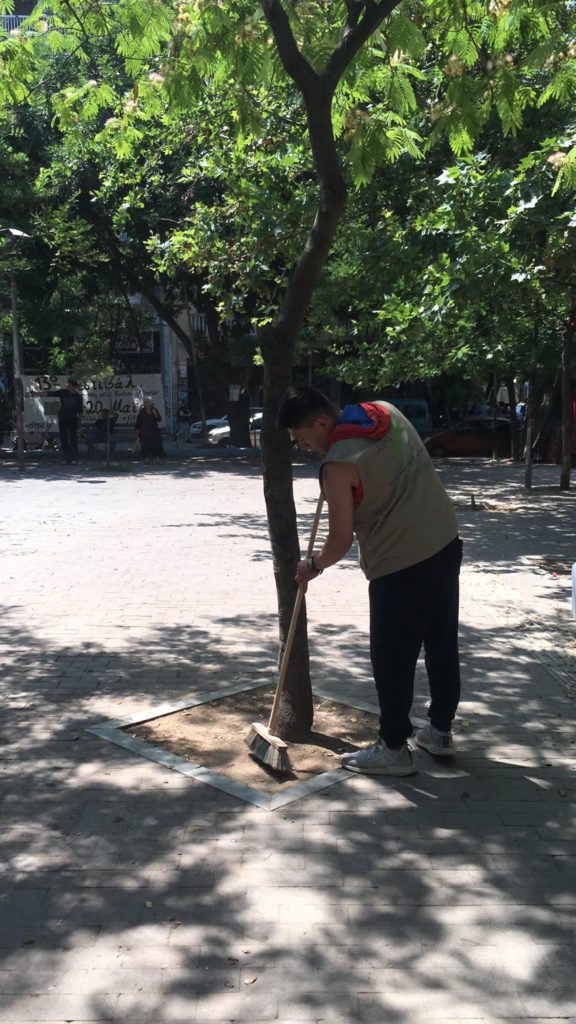 Moataz Mahmoud, one of the participants in the action, said that “The Exarchia area in Athens has played an important role in the history of the Greek people’s struggles against occupation, fascism and dictatorship and is still considered to be the assembly point of revolutionary movements in Greece. It is also necessary to note that this area has also been a home to the Palestinian resistance and that here in Athens, dozens of Palestinian strugglers and resistance leaders engaged in struggle, pursuing the enemy and building the Palestinian revolution, and many were martyred here.”

Speaking about the action, he said that “Jafra Youth Foundation and the Samidoun Network here planted trees and flowers, cleaned the public area, painted the sidewalks and raised the Palestinian flag together with the people of the area. This activity stems from our vision of the importance of building bridges between refugees and host communities. We also aim to serve and support the refugees and migrants who face racism and who are deprived of their human rights. This area has been a safe place for them, and we need to begin activities that bring the communities together.” 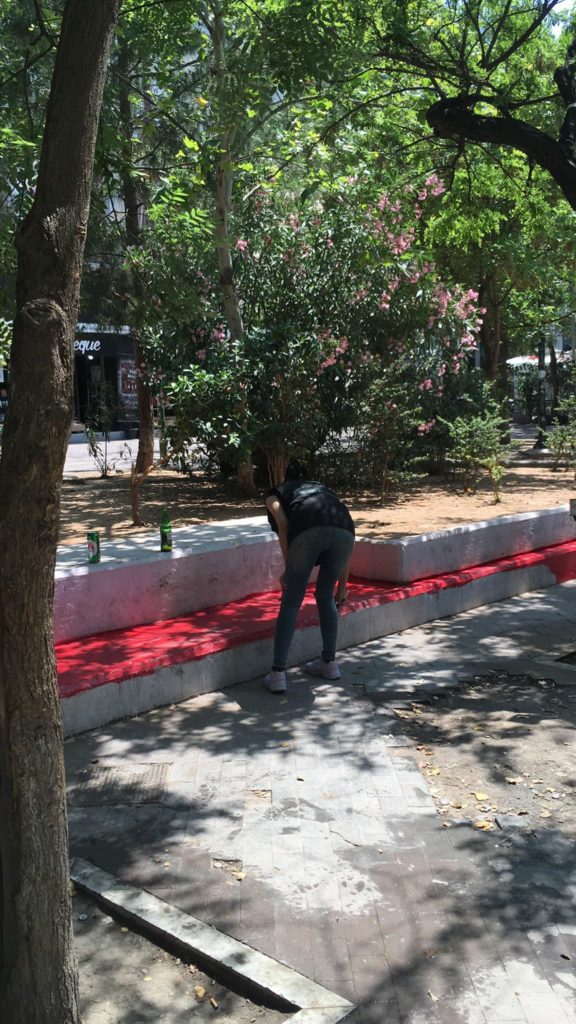 “In this region, among children and young people especially, we need to strengthen our heritage and culture and arm the youth with knowledge. On the other hand, it is our duty to strengthen our relationship with the Greek people, especially the marginalized classes and solidarity movements with the Palestinian people and with the struggles of refugees and migrant people. Simply because we, the Palestinian people, love life and we fight in every way that we can!” Mahmoud said.

Samidoun in Greece is planning additional actions for Palestine and has been involved with many other organizations and Greek coalitions, including the Solidarity Initiative for the Palestinian People, in organizing a number of demonstrations to support the Great Return March and the Palestinian people’s struggle for return and liberation. 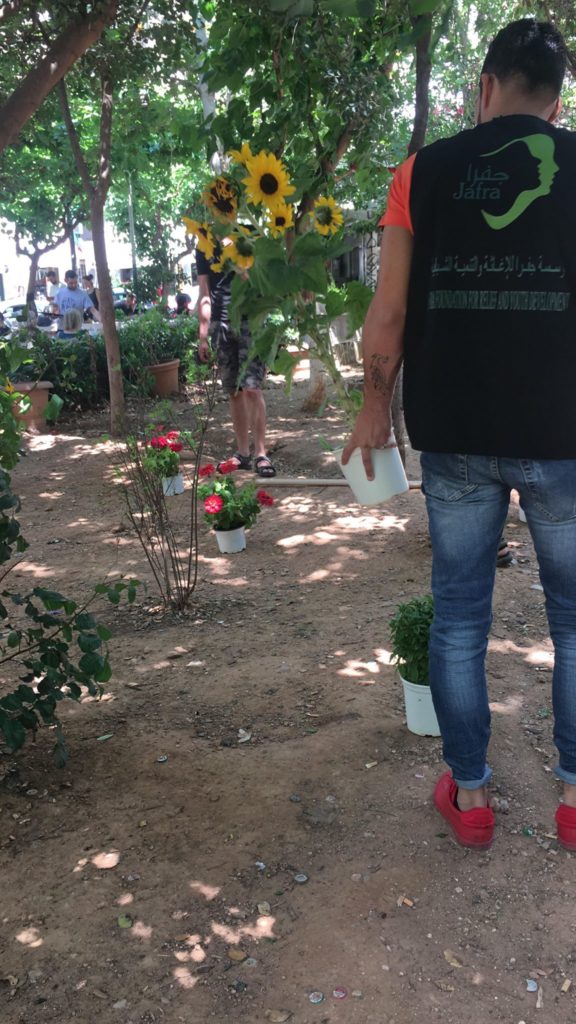