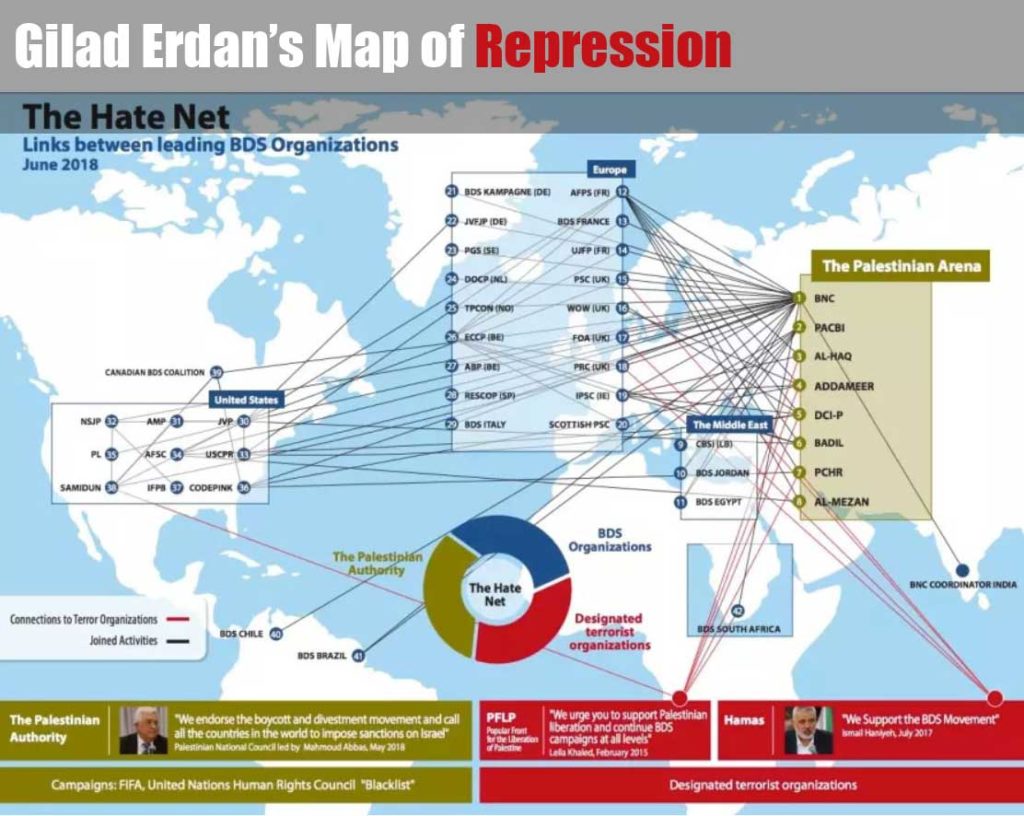 Just one week ago, Israeli Minister of Strategic Affairs and Public Security Gilad Erdan used his position to threaten Palestinian prisoners with even more repression, setting up a commission to discuss specifically how to make the lives of the over 6,000 imprisoned Palestinians even more difficult on a daily basis. And yesterday, Erdan – also charged with suppressing the global solidarity movement with Palestine, especially the boycott, divestment and sanctions (BDS) movement – released another image purporting to “map” leading BDS organizations and Palestine advocacy groups around the world, including Samidoun Palestinian Prisoner Solidarity Network.

Erdan wants to tighten the chains on Palestinian prisoners while seeking to incite government repression against the international organizations that fight for their freedom and the freedom of the Palestinian people. Samidoun is listed with 39 other Palestinian, U.S., Arab, African and European organizations, all involved in the growing BDS campaign around the world, in a presentation Erdan made to the “Global Coalition 4 Israel Forum.” Several of the Palestinian organizations targeted by Erdan, including Addameer, DCI-Palestine, al-Haq and PCHR, play key roles in defending Palestinians imprisoned and detained by the Israeli occupation. While Erdan seeks to depict our organizations as a “hate net,” Erdan himself is a leading promoter of hatred and racism against the Palestinians subjected to Israel’s colonial occupation.

In the view of Erdan – one of the leading officials of the settler-colonial, apartheid state – support for Palestinian freedom is “terrorism.” He’s denounced everyone from Samidoun to the African National Congress to Palestinian rights advocates and NGOs in Palestine and around the world for “terrorism” or ‘links to terror” – more accurately reflecting the “terror” of the Israeli state that its impunity could soon come to an end as a result of these international campaigns in support of the Palestinian people’s struggle.

Despite all of Erdan’s threats, blacklists and rhetoric – from his threats of “targeted assassinations” of Gaza protesters in the Great Return March to his promotion of Palestinian prisoners’ suffering – his efforts to block the boycott of Israel around the world are failing. Instead, despite blacklists and “terror” labels, more and more people are recognizing the real perpetrators of colonial state terror in occupied Palestine: that is, the regime Erdan represents. Far from stopping the international isolation of Israel, Erdan is in effect promoting it – making blacklists of human rights defenders, blocking international parliamentarians from visiting Palestine and using the “terrorism” label to attempt to incite repression against advocacy groups around the world.

The “Hate Net,” like similar attempts, is a failed attempt to intimidate activists and organizations that support Palestinian freedom in an attempt to preserve the impunity of Erdan and the colonial state he represents. This kind of rhetoric is only an inspiration to continue to build our work and advocacy to free Palestinian prisoners and free Palestine.

Interested in getting involved in Samidoun? We’re organizing in the United States, Canada, Greece, France, Britain, Belgium, Germany, Lebanon, Palestine, and elsewhere. Contact us at samidoun@samidoun.net or on Facebook to find out how you can get involved!

Want to support Samidoun’s work? Donate online to keep our work going!  Or publicize and share the information here with your networks of friends and colleagues.