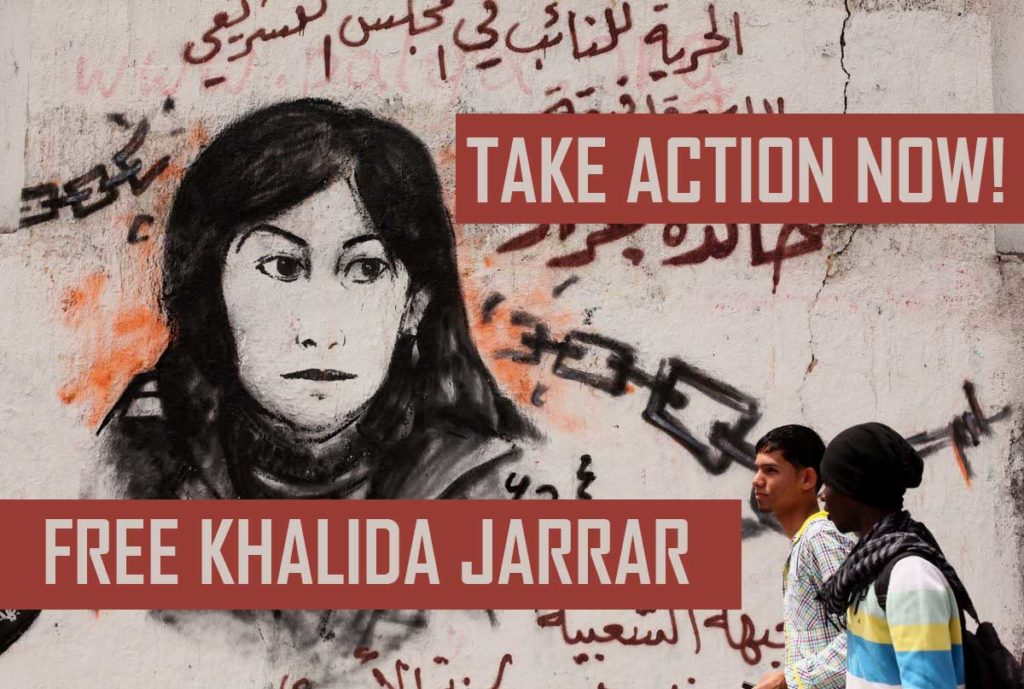 Palestinian leader Khalida Jarrar, a leftist, feminist parliamentarian imprisoned by the Israeli occupation, has been jailed without charge or trial since 2 July 2017. As her friends, family and comrades awaited her release, they were instead informed on 14 June that her administrative detention had been renewed for the third time for an additional four months. Take action to demand the immediate release of Khalida Jarrar and her fellow Palestinian prisoners!

As Palestinians march in Gaza in the Great Return March, and as they take to the streets in the West Bank in the Lift the Sanctions movement, the Israeli occupation is extending Khalida Jarrar’s detention without charge or trial to keep this strong, powerful leader off the streets and away from her people.

Khalida’s administrative detention renewal is scheduled to be approved by an Israeli military court on 2 July. Before this approval happens, it is important that international solidarity is heard, loudly and clearly, demanding her freedom!

Khalida Jarrar is a longtime advocate for the freedom of Palestinian prisoners, the Vice-Chair of Addameer Prisoner Support and Human Rights Association and its former Executive Director. A member of the Palestinian Legislative Council elected as part of the leftist Abu Ali Mustafa Bloc, associated with the Popular Front for the Liberation of Palestine, she chairs the PLC’s Prisoners Committee.

She is also an outspoken leader in the fight to hold Israeli officials accountable for war crimes in the International Criminal Court. She is a member of a Palestinian commission charged with bringing complaints and files before the international court about ongoing Israeli crimes against the Palestinian people, from attacks on Gaza to land confiscation and settlement construction to mass arrests and imprisonment.

This is not the first time she has faced arrest and persecution. In 2014, she resisted – and defeated – an Israeli attempt to forcibly displace her from her family home in el-Bireh to Jericho. Only nine months later, in April 2015, she was seized by Israeli occupation forces and ordered to administrative detention, imprisonment without charge or trial. After a global outcry, she was brought before Israeli military courts and faced 12 charges based on her political activity, from giving speeches to attending events in support of Palestinian prisoners.

After she was released in June 2016, she resumed her leading role in the Palestinian liberation movement, only to be seized once more on 2 July 2017 and once again thrown in prison with no charges and no trial. Her administrative detention was already renewed for another six months in December 2017, and it is clear that the Israeli occupation has no intention of releasing Khalida, one of the leaders among the 6,200 Palestinian prisoners (including nearly 500 administrative detainees) in Israeli jails.

Within the Israeli occupation prison, she has played a leading role in supporting the education of the minor girls held there, organizing classes on human rights and in review for mandatory high school examinations when the prison authority denied the girls a teacher.

We know that the Israeli military court hearing is a sham. But it is more important than ever that our voices are heard and our actions are visible throughout the next week to demand freedom for Khalida Jarrar. Protests are already being organized in New York and elsewhere around the world. Join us and take action!

2. Organize a protest, demonstration or other gathering or event to Free Khalida Jarrar- especially on June 30, July 1 or July 2. Bring posters and flyers about Khalida’s case and hold a protest, or join a protest with this important information. Hold a community event or discussion, or include Khalida’s case in your next event about Palestine and social justice.  Find your nearest Israeli embassy here:  https://embassy.goabroad.com/embassies-of/israel. Write to us at samidoun@samidoun.net or contact us on Facebook to let us know about your action!

3. Contact your Member of Parliament, Representative, or Member of European Parliament. The attack on Khalida is an attack on Palestinian parliamentary legitimacy and political expression. Parliamentarians have a responsibility to pressure Israel to cancel this order.

4. Boycott, Divest and Sanction. Hold Israel accountable for its violations of international law. Don’t buy Israeli goods, and campaign to end investments in corporations that profit from the occupation. Learn more at bdsmovement.net. 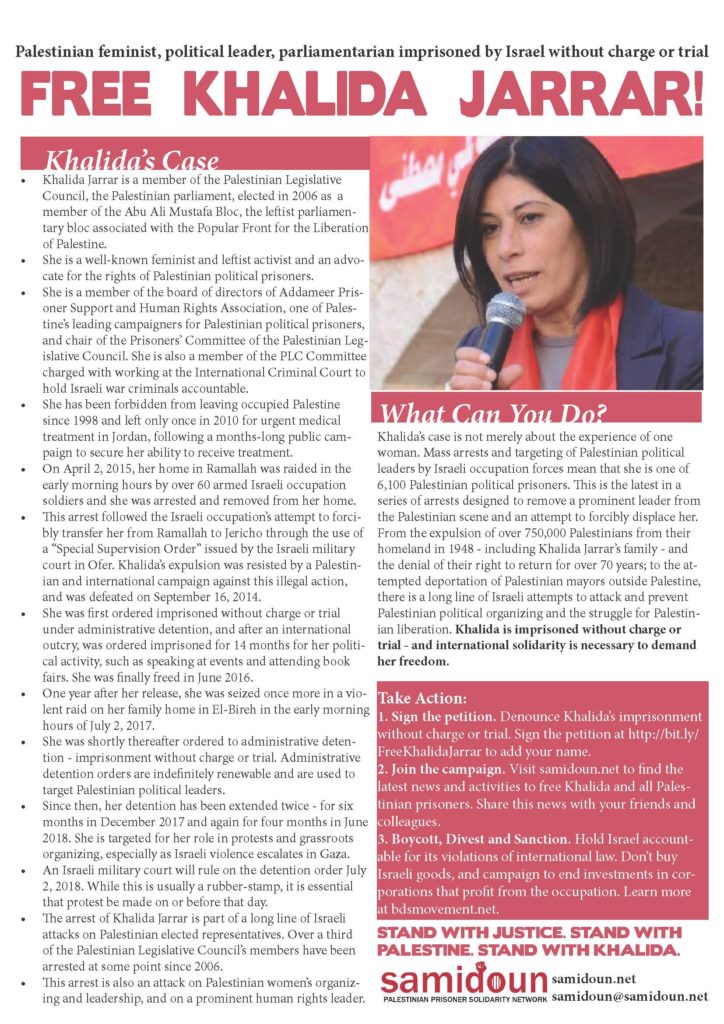 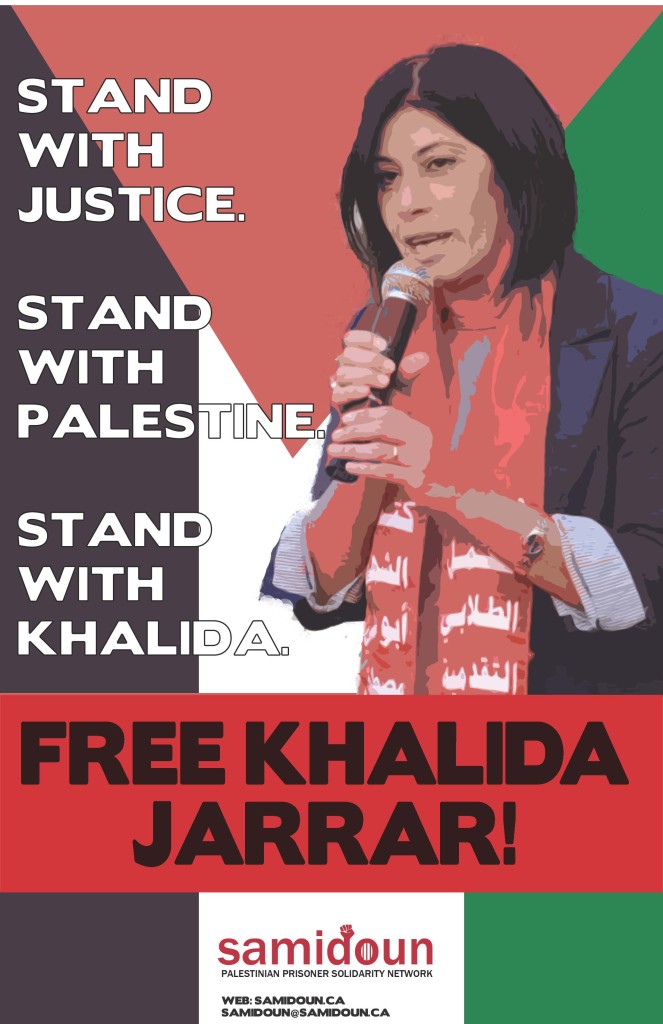 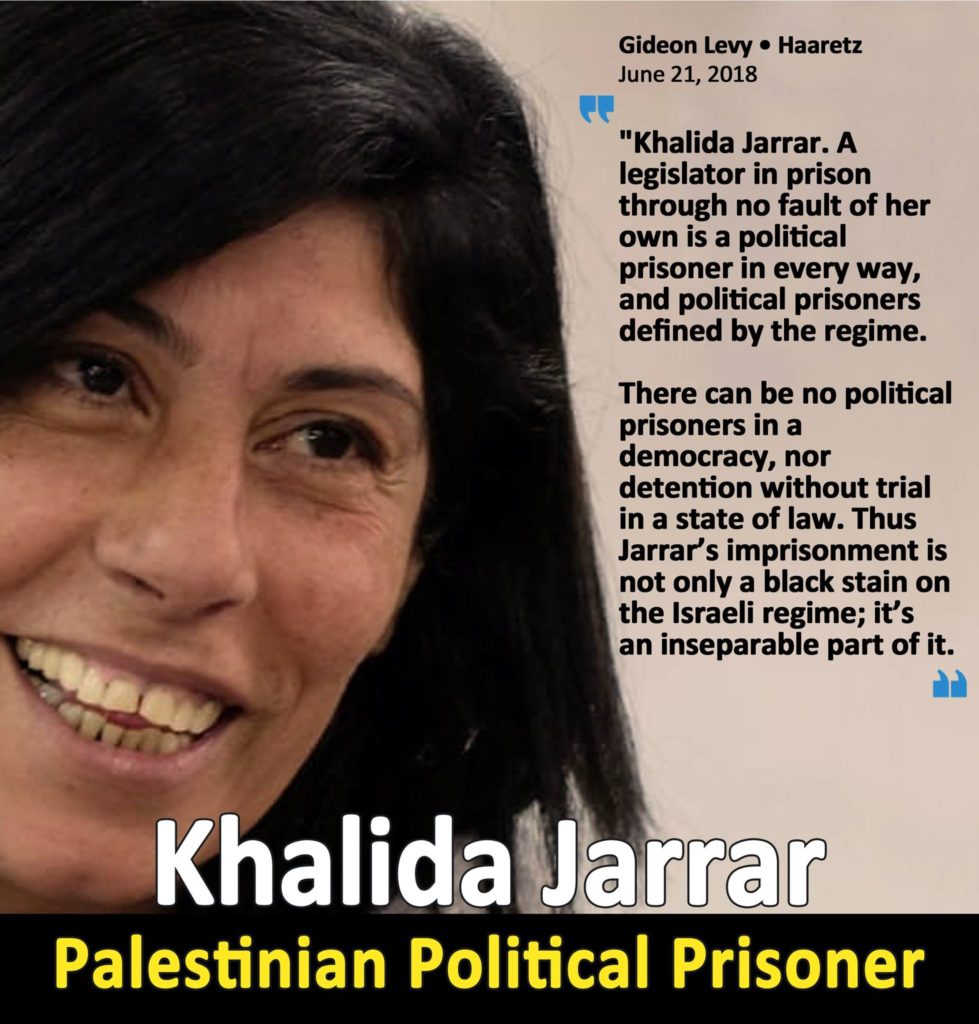