Supporters of Belgian-Palestinian artist, performer and human rights defender Mustapha Awad, detained by the Israeli occupation since 19 July 2018 when he was seized by occupation forces at the Karameh border crossing from Jordan, visited with representatives of the Belgian foreign ministry on Wednesday, 22 August. You too can take action to free Mustapha Awad!

Awad’s arrest has sparked widespread condemnation from numerous Belgian and international organizations and individuals. Increasing attention has been drawn to the exclusion of BDS activists and human rights defenders from occupied Palestine and the interrogation of others at the colonially imposed borders. In this context, the arrest of Awad is a particularly chilling example of the seizure of a foreign citizen, who does not have a Palestinian ID, while he attempted to visit Palestine, the land from which his family was forced in 1948.

As the case has become more visible in mainstream Belgian media, with both French and Dutch agencies reporting on the case, support for the imprisoned dancer – co-founder of the Raj’een debkeh group – has also grown. The FGTB (General Federation of Belgian Labour, the national socialist trade union federation in Belgium) endorsed the petition supporting Awad as did its president Robert Verteneuil. Belgian federal parliamentarian, Gwenaelle Grovonius, also signed on to the petition along with over 100 organizations and over 1,000 individuals.

Cultural groups like Presence et Action Culturelle and community groups and NGOs supporting Palestine and human rights like Intal, Vrede, Le Space and the Ligue des Droits de l’Homme in Liege have also joined the over 100 organizations supporting his call for freedom. See the list of organizational endorsers and sign the petition here.

The “Free Mustapha” Committee also issued a call for donations to help aid Awad’s legal defense in occupied Palestine and in Belgium. “We need to raise money…There are no small donations, the smallest one will be a helping hand. We thank you in advance and do not hesitate to share the petition, the page, the press articles and the bank account number:
“Free Mustafa
BE96 7360 5044 3805.
BIC: KRED BE BB ”

The committee issued a press release following its meeting with the Belgian Ministry of Foreign Affairs:

A delegation of the support committee for Mustapha Awad, a Belgian artist of Palestinian origin, imprisoned since July 19 by Israel, was received this Wednesday, August 22 at the Belgian Ministry of Foreign Affairs.

The delegation was composed of An Muylaert, a doctor who has worked with Mustapha since his arrival as a young refugee in Belgium; Alexis Deswaef, Honorary President of the League of Human Rights; Mohammed Okal, young dancer in the Raj’een debkeh (traditional dance) group that Mustapha founded; Hamdan Al Damiri, representing the Palestinian community in Belgium; Dominique Surleau, President of PAC (Présence et Action Culturelles) and Myriam De Ly (Plate-forme Charleroi-Palestine).

The members of the delegation shared their personal connections with Mustapha and their deep concern about his fate. The delegates noted that they felt that the four officials of the SPF Foreign Affairs administration (three representatives of the Consular Branch and one person specifically in charge of the Middle East) listened to their concerns and welcomed them. The delegation were also informed of the steps that the Department had taken after they became aware that Mustapha was arrested by Israeli authorities. The delegates requested that the Belgian Consul arrange a new visit with Mustapha.

The delegation presented the 1,364 signatures to the « Free Mustapha » petition, launched on Friday, August 18. Over four days, including holidays and the weekend, the Free Mustapha Committee was able to gather 1,263 individual signatures and 101 organizational signatures, including 37 Belgian organizations. The representatives of the Ministry said that they would share the news of the delegation’s visit and the growing wind of solidarity that is blowing in Belgium with the Belgian consul in Jerusalem, so that Mustapha feels the support that exists.

Alexis Deswaef and other members of the delegation expressed their deep concern about the human rights violations regularly committed during the interrogation of prisoners in Israel (inhuman treatment, torture, etc.) Ministry officials seemed to share these fears. An Muylaert raised the point that Mustapha should have, at the very least, the opportunity to call his family.

We are now awaiting the next diplomatic steps that will be taken : the consul’s next visit with Mustapha in prison, the new hearing before an Israeli court in early September and access to the case file by Mustapha’s lawyer.

Waiting, however, does not mean inactivity. We know that  Mustapha and the Raj’een group are known throughout the country. We will continue our campaign of information and mobilization for his release until he is finally back among us. We invite you to sign the petition and to follow our Facebook page : https://facebook.com/freemustapha/

You can help build the campaign to free imprisoned artist Mustapha Awad. Please join us by taking the following actions: 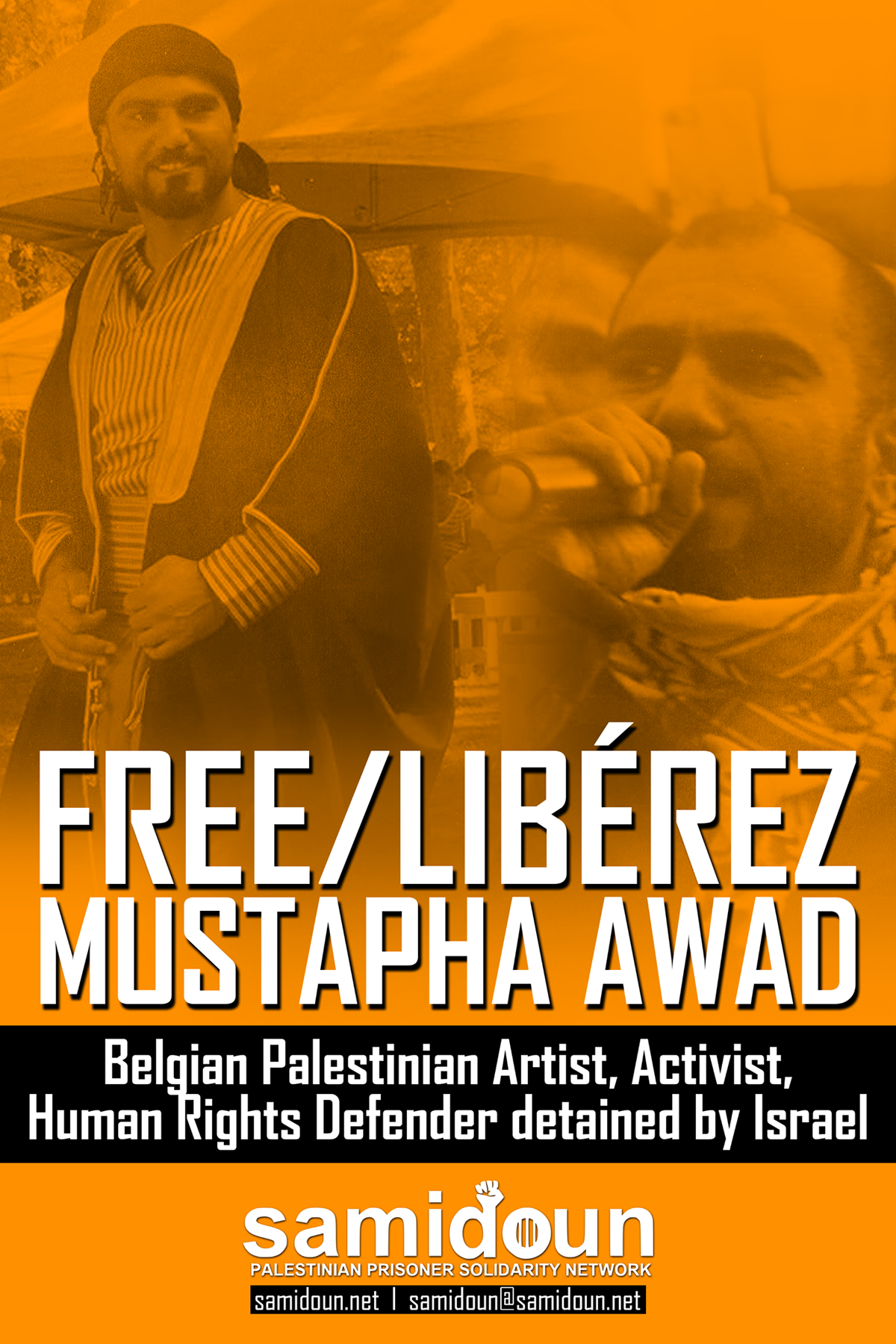