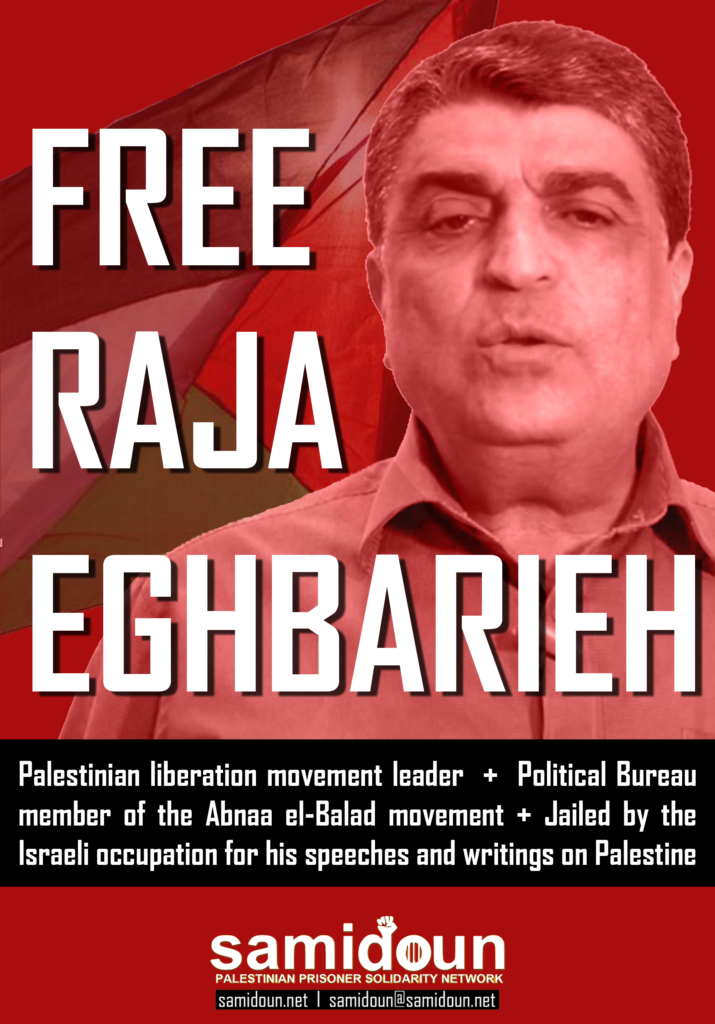 Palestinian leader Raja Eghbarieh, a longtime leader of the leftist Palestinian Abna’a el-Balad movement in occupied Palestine ’48, was seized by Israeli forces from his home in Umm el-Fahm on the morning of Tuesday, 11 September. His detention has been extended on several occasions and he will be once again brought before an Israeli court on Thursday, 20 September.

Samidoun Palestinian Prisoner Solidarity Network expresses our strongest solidarity with Raja Eghbarieh, and we demand the release of this Palestinian national leader. His imprisonment highlights the reality that all Palestinians face a systematic settler colonial system of racist oppression and political persecution and imprisonment. We urge friends and supporters of Palestine around the world to take up the call and join the campaign to free Raja Eghbarieh!

Israeli “anti-crime” police stormed the family home in Umm al-Fahm while Eghbarieh’s wife, Ilham Odeh, and daughter Anat were still wearing pajamas. Police seized three computers in the house, including those that belonged to Anat and Ilham. They did not confirm where he was being held until the following day after he was taken from his family home.

Upon his arrest, he was interrogated for seven hours in Megiddo prison before being transferred to solitary confinement. Eghbarieh, 67, was not allowed to receive his medications to treat breathing problems; three days into his isolation, his lawyers filed an objection to the inhuman and degrading treatment to which he was being subjected. He has been denied family visits until the present day.

The Israeli occupation is accusing Eghbarieh of “incitement to terrorism and violence” for giving public political speeches and writing on social media about the struggle of the Palestinian people for liberation. Al-Akhbar newspaper reported that the Israeli forces’ interrogation of Eghbarieh focused on his political activities, the work of Abna’a el-Balad and the meaning of his position in the movement. The founding general secretary of the movement elected at its national conference in 1990, he today serves as a member of its political bureau.

This is not the first time he was detained; he and 10 other leaders of the Abnaa el-Balad movement were held without charge or trial under administrative detention in 1987 after playing a leading role in a general strike within Palestine ’48 as part of the first Intifada. He has been arrested on multiple occasions by Israeli forces over his years of struggle.

Israeli prosecutors are allegedly labeling him a “danger to the state” for his words of struggle and justice for Palestine, illustrating the reality that the settler-colonial Zionist state built on the dispossession of the indigenous people of the land is “endangered” by Palestinian truth and reality.

Palestinian political leaders also noted that Eghbarieh’s arrest comes in the context of ongoing discussions throughout the Palestinian liberation movement and especially those inside occupied Palestine ’48 about new steps of unity and confrontation of the Zionist state. These discussions have escalated after the passage of the “nation-state law” and the growing disillusionment with participation in the Knesset as a means of fighting for Palestinian rights. In Al-Akhbar, they noted that the arrest of Eghbarieh appears to be another attempt to block a promising Palestinian political project from coming to fruition.

“The occupation is disturbed by every political or national activity carried out by any Palestinian on the ground….the nation-state law did not surprise us, the state’s ideology and racism do not need the enactment of new laws. What it fears most is our political unity,” said Ilham Odeh, Eghbarieh’s wife and comrade. “The Israeli occupation authorities do not intimidate us with their arrests or their failed attempts to destroy the Abnaa el-Balad movement…We are absolutely certain that all of this is part of the political persecution of the movement, its leaders and the Palestinian leadership within the occupied homeland,” she said.

Supporters of Eghbarieh, the Abnaa el-Balad movement and Palestinian liberation protested outside the Hadera court on 16 September as Eghbarieh’s detention was extended once again. Throughout the proceedings, his lawyers have continued to insist that his words are public and he stands behind them with pride in commitment to the struggle for the liberation of the Palestinian people. Nevertheless, the Israeli prosecution read out lists of names of people – all Palestinian Arabs in occupied Palestine ’48 – prosecuted for posting about politics on Facebook. The Free Haifa blog also noted that the police spokesperson noted that Eghbarieh “writes many posts and receives many likes and shares” as a justification for his continued detention.

Perhaps the best-known such case is that of Dareen Tatour, the Palestinian poet currently serving out the final two months of her prison sentence after three years under house arrest for publicly posting about politics and sharing her poetry on Facebook and Youtube. Another key case in the ongoing repression of Palestinians in occupied Palestine ’48 has been that of Sheikh Raed Salah, repeatedly arrested, imprisoned and subject to solitary confinement.

Palestinians in occupied Palestine ’48 – like their sisters and brothers throughout Palestine and internationally – are under attack. Take action to defend Raja Eghbarieh and demand his freedom!