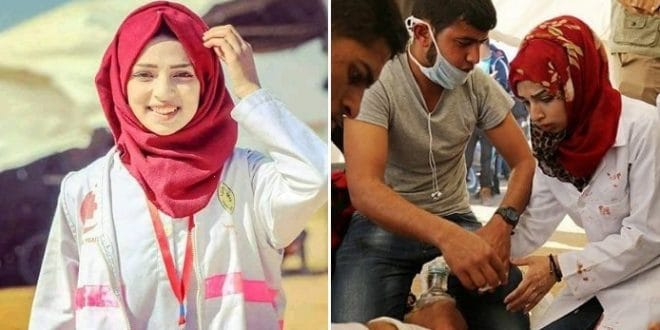 RAZAN AL-NAJJAR, A TRACK OF A BUTTERFLY.

Film screening 30 mins followed by a talk and a discussion.

We are so lucky to have Razan AlNajjar’s mother and father in Berlin, they will speak about the situation in Gaza now and the ongoing Great March of Return protest.

RAZAN EL-NAJJAR, a 21-year-old Palestinian, was killed on 1st June 2018, during the Great Return March, on the eastern edge of Khan Younis in the southern Gaza Strip.

While working as a rescuer and wearing a jacket with the logo of the health services, Razan was fatally hit by an explosive bullet fired by an Israeli army sniper.

In this documentary film, we follow Razan’s mother and her family, in her house, and in the neighborhood, to learn about the life of this young woman, and to discover images of the Great Return March that are held every Friday in Gaza, since March 30th, 2018.

Razan al-Najjar, a volunteer health worker, took all the precautions, her colleagues say, but she was still killed when she was struck in the chest by an explosive illegal bullet at the Great Return March.

The 21-year-old was the second medic to be killed in a 10-week Palestinian demonstration movement, and Gaza’s ministry of health says 25 others have been hit with live fire.

Razan Al Najjar had become an icon in Gaza before her death, with dozens of images published online of the woman who wore colourful headscarves and a resolute expression on her face.

She was often photographed with her white coat spattered with the blood of her patients, and one image shows her anxiously kneeling over a young man, feverishly bandaging his bleeding head.

So much to say about Razan, may her soul rest in peace.