Home News Call to Action to Defend the Venezuelan Embassy in Washington, DC: The...

Samidoun Palestinian Prisoner Solidarity Network supports the following statement from the Embassy Protection Collective (Colectivos Por La Paz), a grassroots movement of people who are staying in the Venezuelan embassy in Washington, DC to protect it from takeover by the opposition.

Individuals and organizations are invited to sign on to the Declaration of the Embassy Protection Collective. You or your organization can join us by signing on here: http://bit.ly/EPCDeclaration.

The Collective will have important events coming up in the next few days. For details of events at the embassy see Acton: 24/7 Protection Of DC Venezuelan Embassy or visit the Facebook page. The crucial days for people to be at the embassy and spend the night in Washington, DC, will be April 24-25. This is when the opposition has openly said they will seek to take the embassy. 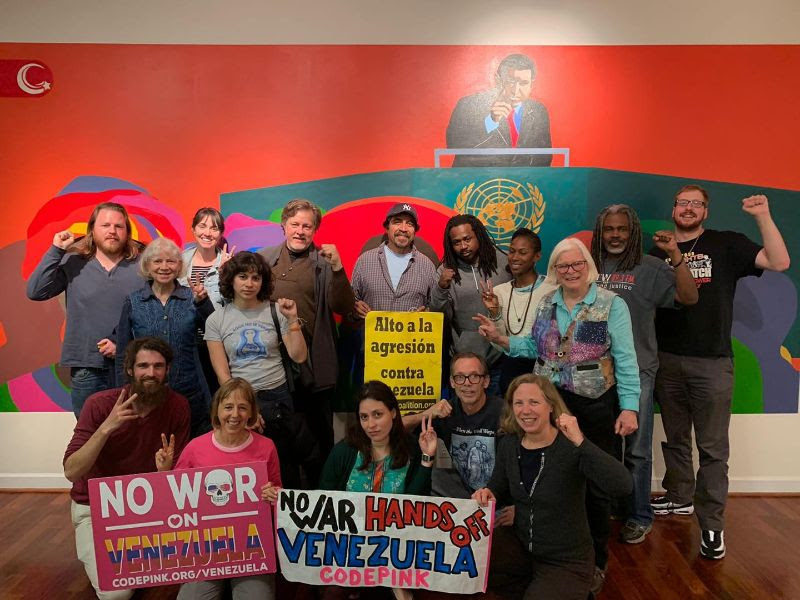 We have joined together as the Embassy Protection Collective to show solidarity with the people of Venezuela and their right to determine their elected government. We are staying in the Venezuelan embassy with the permission of the legitimate Venezuelan government under President Nicolas Maduro. We seek to provide a nonviolent barrier to the threatened opposition takeover of their embassy in Washington, DC by being a presence at the embassy every day of the week for 24 hours a day.

The Collective is working from the embassy, located in the heart of Georgetown in Washington, DC during the day and holding seminars and cultural events in the evenings, as well as sleeping in the embassy. Events include forums on Venezuela, its government, economy and the ongoing attempted coup. We are also holding seminars on US foreign policy toward Africa, Honduras and Iran, the prosecution of Julian Assange and other issues.

There is great cause for us to be concerned about a hostile takeover of the DC Embassy. On March 18, 2019, the Venezuelan opposition took over the military attaché building on 2409 California St in Washington DC, with the help of the DC Police and Secret Service. On that same day, the opposition also took over the Venezuelan Consulate in New York City. They have publicly threatened to take over the embassy itself.

According to Article 22 of the 1961 Vienna Conventions on Diplomatic Relations, foreign embassies should be protected by the United States government and their space should not be violated by the US government. Specifically, international law requires:

The Trump Administration is violating the Vienna Convention by not only allowing the illegal seizure of diplomatic premises but by facilitating it. The Election Protection Collective is supporting the people of Venezuela by taking responsibility to ensure that Article 22 of the Vienna Convention is followed.

The Elected Government of President Maduro Remains In Power

The government of President Nicolás Maduro was re-elected on May 20, 2018 in response to the opposition demanding an early election. The election was held consistent with the Venezuelan Constitution, in consultation with opposition parties and as determined by the National Electoral Council, an independent branch of the Venezuelan government.

The electoral process was observed by more than 150 election observers. This included 14 electoral commissions from eight countries among them the Council of Electoral Experts of Latin America; two technical electoral missions; and 18 journalists from different parts of the world, among others. According to the international observers, “the elections were very transparent and complied with international parameters and national legislation.”

In a letter to the European Union correcting some of the false statements made about the election, election observers wrote: “We were unanimous in concluding that the elections were conducted fairly, that the election conditions were not biased, that genuine irregularities were exceptionally few and of a very minor nature.”

Voting machines were audited before and immediately after the election. Venezuela does something no other country in the world does, a public Citizen’s Audit of a random sample of 52 to 54% of voting machines. The Citizen’s Audit is observed by the media, the public, and all opposition parties, who sign the audits.

The opposition relies on Article 233 of the Constitution, which allows the National Assembly president to serve as interim president only if the president-elect has not yet been inaugurated. Guaidó’s self-appointment occurred after President Maduro had been inaugurated.

“become[s] permanently unavailable to serve by reason of any of the following events: death; resignation; removal from office by decision of the Supreme Tribunal of Justice [equivalent of impeachment]; permanent physical or mental disability certified by a medical board designated by the Supreme Tribunal of Justice with the approval of the National Assembly; abandonment of his position, duly declared by the National Assembly; and recall by popular vote.”

None of these conditions were met.

If Guaidó had met the above conditions, Article 233 allows him to serve for only 30 consecutive days pending election and inauguration of the new President. Guaidó’s self-appointment and fraudulent inauguration occurred more than 30 days ago and no election has been scheduled.

In a press briefing, Elliot Abrams, the US Special Representative for Venezuela, could not explain these violations of law by Guaidó and admitted that Guaidó is not “able to exercise the powers of the office because Maduro still is there.” Even Abrams admits that Guaidó is not the president. Therefore, he has no authority over the Venezuelan embassy.

The Role of the Embassy Protection Collective

The Embassy Protection Collective is made up of civilians, United States citizens, who are peacefully defending the embassy. If the opposition enters, they will be trespassing. We call on the DC police, Secret Service, Department of Homeland Security and any other law enforcement agency to uphold the law and prevent the opposition from trespassing.