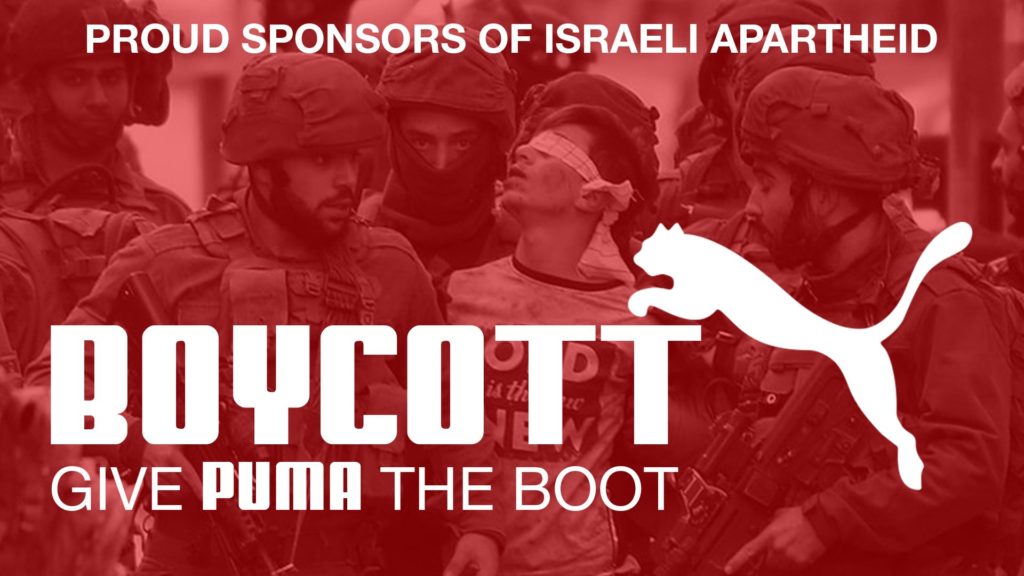 Take creative action in your town or city on the #BoycottPuma international day of action, calling on Puma to end their complicity with Israeli apartheid!

This is part of an ongoing response to the call from the Palestinian civil society in 2005 for a campaign of Boycott, Divestment & Sanctions (BDS) against Israel until it respects human rights and international law.

As one of the world’s top athletic apparel makers, Puma’s sponsorship brings international legitimacy to the IFA and helps maintain its direct involvement with violations of human rights and international law off the field.

Take action and support the call from more than 200 Palestinian teams for Puma to end its support for Israel’s military occupation by terminating its sponsorship deal with the IFA.

Register your action today and bring the #BoycottPUMA campaign to your town or city!

Join your local action on the international day of action:

Hastings:
Picket at 12.00 until 14.00 outside Sports Direct, Wellington Place, Give Puma the Boot! Action in Hastings Town Centre

Jersey:
Flyering at 11am at St Helier

Southampton:
Stall at 11am-1pm outside Sports Direct, 40-50 Above Bar St, Southampton SO14 7GW