Home Events 20-23 September, NYC: The People’s Mobilization to Stop the US War Machine... 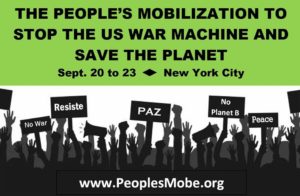 The US War Machine Will Rage On
Until We Rise Up to Stop It!

Join the People’s Mobilization to Stop the US War Machine

The US War Machine must be stopped, and only we can stop it. That’s why we are organizing the People’s Mobilization to Stop the US War Machine, a series of actions in New York City from September 20 to 23 while the United Nations General Assembly meets.

At a time when all of the world leaders gather, we will say we’ve had enough of the US War Machine.

We demand the US be held accountable for its destructive acts. It’s time for the US government to obey the United Nations Charter by stopping regime change operations, ending the use of unilateral coercive measures (aka sanctions) and ceasing military attacks.

We demand the US sign the nuclear weapons ban treaty, rejoin the Iran nuclear agreement and Paris climate treaty, disband NATO and close bases and outposts around the world.

We demand an immediate transition to a peace economy that uses our resources to meet human needs and protect the planet.

Sign up to be part of the People’s Mobilization to Stop the US War Machine so we can keep you up to date as plans unfold and provide materials for you to spread the word in your community.

Plan to come to New York City for a full weekend of events. Facebook event page.

Saturday, September 21 – Race, Militarism and Black Resistance in the “America’s” from 5:00 to 7:00 pm at the Green Worker Cooperative, 1231 Lafayette Ave in the Bronx.

Monday, September 23 – Solidarity evening with UN representatives from countries targeted by US sanctions and intervention. “A Path to International Peace: Realizing the Vision of the United Nations Charter.” Location: Community Church of New York 40 East 35th St., New York City, 10016. Hear from UN representatives and social movements. The Peace Memorial Prize will be awarded and David Rovics will perform. Time:  6:30 pm (doors open at 6:00 pm). You must register in advance. Register at http://bit.ly/RSVPapathtopeace. The event is free but we will accept donations to help cover the costs.

Representatives of 120 nations met in July to reaffirm their support for the UN Charter in a revival of the Non-Aligned Movement. Some of those representatives plus grassroots groups will join us for a discussion of the ways the United States is violating the charter, how they are organizing and what we can do to hold the US accountable.

Presentation of the 2019 US Peace Prize.  The US Peace Memorial Foundation awards the US Peace Prize to recognize and honor the most outstanding American antiwar leaders.  These courageous individuals and organizations have publicly opposed military interventions such as invasion, occupation, production of weapons of mass destruction, use of weapons, threats of war, or other actions that threaten peace.  Previous recipients include David Swanson, Ann Wright, Veterans for Peace, Kathy Kelly, CODEPINK Women for Peace, Chelsea Manning, Medea Benjamin, Noam Chomsky, Dennis Kucinich, and Cindy Sheehan. Distinguished Americans and organizations under consideration for the 2019 US Peace Prize are Ajamu Baraka, Erica Chenoweth, Stephen D. Clemens, Thomas C. Fox, Bruce K. Gagnon, Jewish Voice for Peace, National Network Opposing the Militarization of Youth, Sally-Alice Thompson, Women’s March on the Pentagon, and World BEYOND War. The US Peace Memorial Foundation publishes the US Peace Registry, awards the annual US Peace Prize, and is planning for the US Peace Memorial in Washington, DC.  These projects help move the United States toward a culture of peace, as we recognize thoughtful and brave Americans and U.S. organizations that have taken a public stand against one or more U.S. wars, or who have devoted their time, energy, and other resources to finding peaceful solutions to international conflicts.  We celebrate these role models to inspire other Americans to speak out against war and to work for peace.

Panel: Unilateral Coercive Measures as Threats to International Peace featuring representatives from impacted nations including Venezuela, Nicaragua and Syria. Moderated by Bahman Azad of the US Peace Council.

Panel: What Must be Done to Preserve Peace: Centering Power of Transnational Solidarity featuring Ajamu Baraka of Black Alliance for Peace on Human Rights and peace as historic areas of struggle for civil society within UN system, Taryn Fivek of the International Action Center on Havana and Caracas declarations – making the Americas a “Zone of Peace”, Margaret Flowers of Popular Resistance on sanctions as acts of war, H. E. Leon Siu of the Hawaiian Kingdom and Decolonization Alliance and Lorraine Liriano of A Call to Action on Puerto Rico on decolonization as imperative for peace and Glen Ford of Black Agenda Report on the North-South Divide, Climate Change and War: The International Threat to Peace.

Next steps and closing led by Joe Lombardo of the United National Antiwar Coalition.

We also encourage you to attend these events:

The US War Machine is raging at a fevered pitch. It lurches from continent to continent seeking new opportunities to feed the insatiable weapons makers and military contractors. It overthrows governments, and even when it fails, as it has in Venezuela, it marches on in delirious denial. It jettisons diplomacy and international law to the trash heap.

Not content with wars abroad, the US War Machine rages at home through the militarization of our communities, schools and cultural institutions. It consumes more and more of the federal budget, now eating two-thirds of discretionary spending, cheered on by Congress members from both major parties. Every year, the war budget grows while cuts are made to housing, health care, food programs, and other necessities. Every year, more veterans kill themselves, leaving their families and loved ones to mourn.

The US War Machine threatens our very existence as it gobbles up more fossil fuels than any other institution, spewing greenhouse gases and driving climate chaos. It destroys the land, water, and air, and threatens the life of every species with its war games, weapons tests, military bases built in sensitive ecosystems and dumping of depleted uranium and other toxins. And, with nuclear weapons now on hair-trigger alert, the US War Machine has moved the doomsday clock dangerously close to midnight.

As US hegemony falters, the US War Machine is becoming more bellicose. Like a drunken jilted lover, it lashes out at everyone without regard for the consequences of its actions.

Sign up to be part of the People’s Mobilization to Stop the US War Machine so we can keep you up to date as plans unfold and provide materials for you to spread the word in your community.