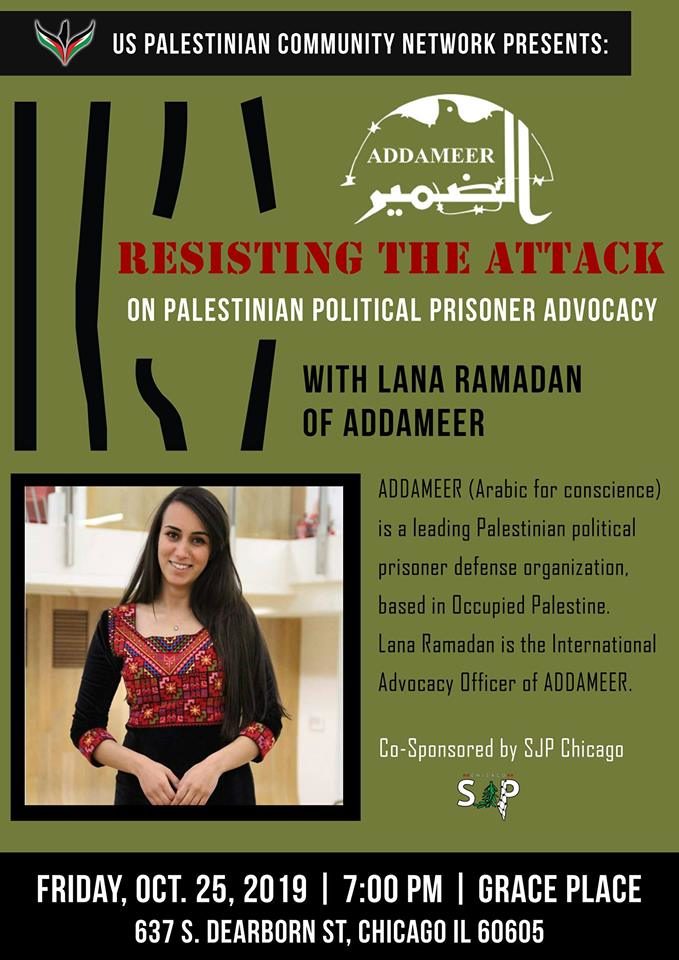 Speaker: Lana Ramadan was born in Dheisheh refugee camp, near Bethlehem in the West Bank. After being actively involved in community activities, Lana studied Human Rights and International Law in the joint Al Quds University and Bard College program. After graduating, Lana went directly into a master’s program at the London School of Economics. She graduated with a Master in Human Rights in 2016. Lana worked with Badil Refugee Resource Centre. She worked as a researcher, specifically focusing on forced displacement and the creation of coercive environments by Israeli policies. In December 2017, she began at Addameer Prisoner Support and Human Rights Association as the International Advocacy Officer.

About Addameer: ADDAMEER (Arabic for conscience) Prisoner Support and Human Rights Association is a Palestinian non-governmental, civil institution that works to support Palestinian political prisoners held in Israeli and Palestinian prisons. Established in 1992 by a group of activists interested in human rights, the center offers free legal aid to political prisoners, advocates their rights at the national and international level, and works to end torture and other violations of prisoners’ rights through monitoring, legal procedures and solidarity campaigns.

Circumstances on the ground: On the one hand, over than 800 thousand Palestinians had been arrested by the occupation since the policy of arrest started. The arrest campaigns have affected all Palestinian families, as it is now hardly possible to find a family where there is not at least one member who has experienced detention and imprisonment. Some families were less fortune, with two, three, or even four brothers from the same family under detention at the same time. The Israeli occupation uses detention and imprisonment as a tool to punish Palestinians for practicing their right to resist the occupation and the oppression that it imposes on them. Those prisoners suffer from various violations from the moment of arrest, to interrogations and torture and finally to the unjust and illegal military court system.

On the other hand, several organizations, governments and legislations are in direct opposition to Palestinian rights and to the work of certain Palestinian movements and human rights organizations. This is precisely shown in recent American laws that affect Palestinians directly. Whether those laws affect funding received by the U.S. government or those which are anti the Boycott, Divestment, and Sanctions (BDS) movement, they show the politicization of American legislation that oppose Palestinian basic rights and also the rights of American citizen especially the rights to freedom of expression and the First Amendment right to participate in political boycotts.

Within these circumstances, and believing in the significant role that the international community can play in contributing to ending Israeli violations against Palestinians, as well as taking into consideration the significant effect that public opinion in the U.S. has in pressing on the occupation’s government, join USPCN and ADDAMEER in a discussion on how we can continue to work to help liberate Palestinian political prisoners.