In the early dawn hours of Thursday, 31 October, Israeli occupation forces stormed the Ramallah home of Palestinian leftist and feminist leader and internationally-known parliamentarian, Khalida Jarrar. They seized Jarrar from her family home at 3 a.m. Jerusalem time, with over 70 soldiers and 12 military vehicles armed for the forcible invasion, as reported by her daughter Yafa on Facebook:

Within the Israeli occupation prisons, she played a leading role in supporting the education of the minor girls held there, organizing classes on human rights and in review for mandatory high school examinations when the prison authority denied the girls a teacher.

Over 275 organizations, political parties and social movements around the world joined in a collective call for her release. 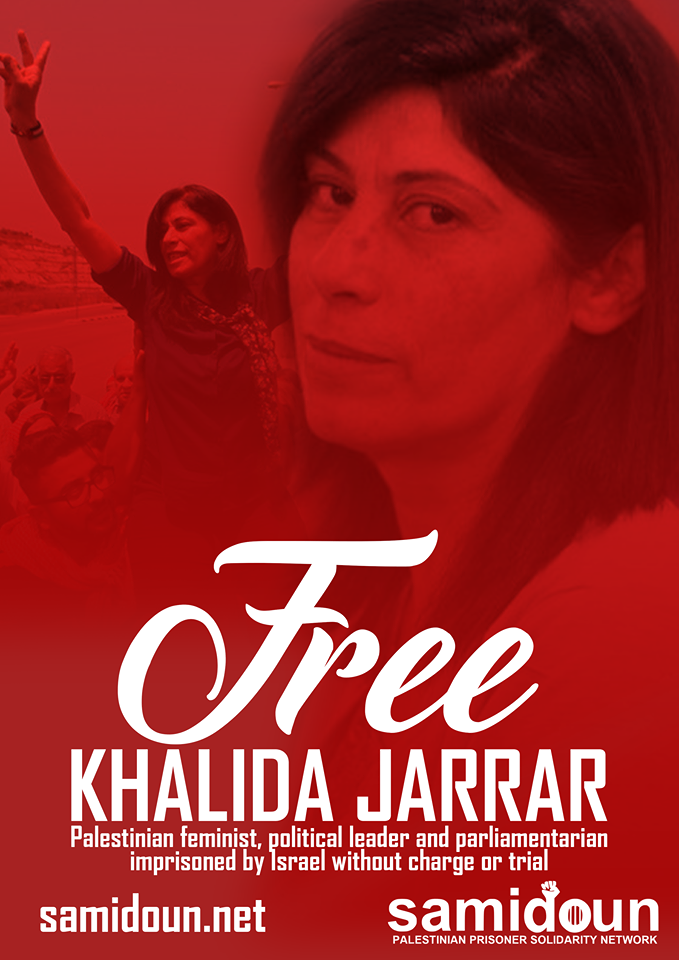 This was not the only time that Jarrar was imprisoned by the Israeli occupation; her arrest in 2017 came only 13 months after she was released from Israeli prison after serving a 15-month sentence for her public political activity. After being arrested in 2015, she was ordered to administrative detention; in response to public outrage, she was transferred to the military courts for a bogus trial. During this most recent 20 months in prison, she remained jailed with no charges and no trial the entire time.

Jarrar is a longtime advocate for the freedom of Palestinian prisoners and has served as the former Vice-Chair and Executive Director of Addameer Prisoner Support and Human Rights Association. A member of the Palestinian Legislative Council elected as part of the leftist Abu Ali Mustafa Bloc, associated with the Popular Front for the Liberation of Palestine, she chaired the PLC’s Prisoners Committee.

She is also an outspoken leader in the fight to hold Israeli officials accountable for war crimes in the International Criminal Court. She is a member of a Palestinian commission charged with bringing complaints and files before the international court about ongoing Israeli crimes against the Palestinian people, from attacks on Gaza to land confiscation and settlement construction to mass arrests and imprisonment.

Israeli occupation forces have once again arrested Palestinian feminist and leftist leader Khalida Jarrar in an early-morning raid on her home in occupied Ramallah. pic.twitter.com/3ElwBGLzh1

In 2014, she resisted – and defeated – an Israeli attempt to forcibly displace her from her family home in el-Bireh to Jericho. Only nine months later, in April 2015, she was seized by Israeli occupation forces and ordered to administrative detention, imprisonment without charge or trial. After a global outcry, she was brought before Israeli military courts and faced 12 charges based on her political activity, from giving speeches to attending events in support of Palestinian prisoners.

After she was released in June 2016, she resumed her leading role in the Palestinian liberation movement, only to be seized once more on 2 July 2017 and once again thrown in prison with no charges and no trial.

Samidoun Palestinian Prisoner Solidarity Network urges international mobilization and action to demand the immediate release of Khalida Jarrar. This arrest comes amid multiple hunger strikes, including a hunger strike of over a month carried out by Heba al-Labadi, and the severe torture of Samer Arbeed. It is yet another attempt by the Israeli occupation to attack Palestinian popular movements – and campaigns to defend Palestinian prisoners – and suppress them through fear, arrests and intimidation carried out by a massively armed occupation force.

It is urgent that we intensify our solidarity to demand the freedom of Khalida Jarrar, Heba al-Labadi and all of the thousands of Palestinian prisoners behind bars in Israeli occupation prisons, including building the movement to boycott Israel on an international level.

With action in Belgium for Ahmad Sa’adat, Samidoun welcomes the Plate-forme Charleroi-Palestine to the network