Heba Al-Labadi, a 24-year-old Palestinian-Jordanian tortured by Israeli interrogators for weeks, is on her 17th day of a hunger strike against her “administrative detention” without charge or trial. She faces her next hearing in an Israeli military court on Thursday, 17 October. Your letters of support will send a powerful message to both her and the Israeli jailers. 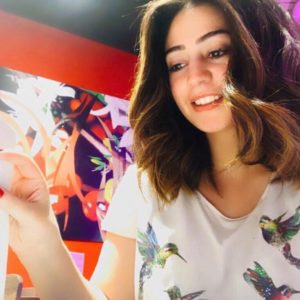 On Tuesday, 20 August, Heba was abducted by Israeli occupation forces from the Allenby border crossing between Jordan and the occupied West Bank, where she had traveled to attend a family wedding in Nablus.

The occupation forces transferred her to a series of detention centers and prisons in which she underwent five weeks of brutal interrogation, including torture.

In an account obtained and released by the Commission on Detainees’ and Ex-Detainees’ Affairs, Heba said her interrogations began at 9:00 am, then continued until early the following morning, on each of the first 16 days.

“The interrogation was very cruel and violent, and it lasted for long hours while I was sitting tied to the chair, which caused pains in my back, hands and neck,” she said.

“Interrogators kept yelling at me loudly and they were sitting close to me, touching my leg deliberately in a provocative way. They spit on and described me with ugly descriptions. They cursed me saying: loser, mean, animal, ugly and many cruel words that I heard for the first time in my life. They told me that I am an extremist and they cursed the Islamic and Christian religions and said that Judaism is the best and that other religions are racist.”

Interrogators also threatened Heba with the arrests of family members, as well as placement into “administrative detention.”

“They told me, ‘We do not have any evidence against you, but we have administrative detention with the authority to renew it for seven and a half years, and then we will detain you in the West Bank and prevent you from going to Jordan and deprive you of family visits.'”

Later, Heba said, “I told the interrogator that the psychological torture they use is more difficult than the physical one. He said, ‘I know.'” 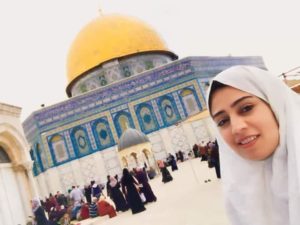 She launched her hunger strike on Tuesday, 24 September, five weeks after her interrogation began, in response to an “administrative detention” order.

These orders, issued by Israeli military commanders, allow them to intern Palestinians indefinitely without charge or trial.

While Heba’s was issued for an initial six-month period, commanders can renew them an indefinite number of times.

Heba “is subjected to being searched every two hours, including throughout the night and often by soldiers.” the Addameer Prisoner Support and Human Rights Association said in a statement after its attorney, Samer Simaan was able to visit her for the first time on Thursday, 3 October.

Her “isolation cell is filthy and has surveillance cameras,” Addameer said. “The designated area for bathing is completely exposed and therefore, she has not been able to shower since arriving to Jalameh Prison. Additionally, there is no window in the isolation cell, and in its place is an air conditioning unit meant to keep the cell cold. There is nothing in the isolation cell except for one dirty sheet.”

On Monday, 5 October, her father warned a Jordanian television channel of the risks his daughter’s hunger strike posed to her health.

“My daughter has been exposed to harsh detention conditions and her health is deteriorating because of her hunger strike for 14 days,” he said.

Heba will challenge her “administrative detention” in an Israeli military court next Thursday. She is currently held in isolation as punishment for her strike.

She is one of two Jordanian citizens among 425 Palestinians in “administrative detention,” one of six on hunger strike to demand freedom, and one of 43 imprisoned women and girls among 5,000 Palestinian political prisoners.