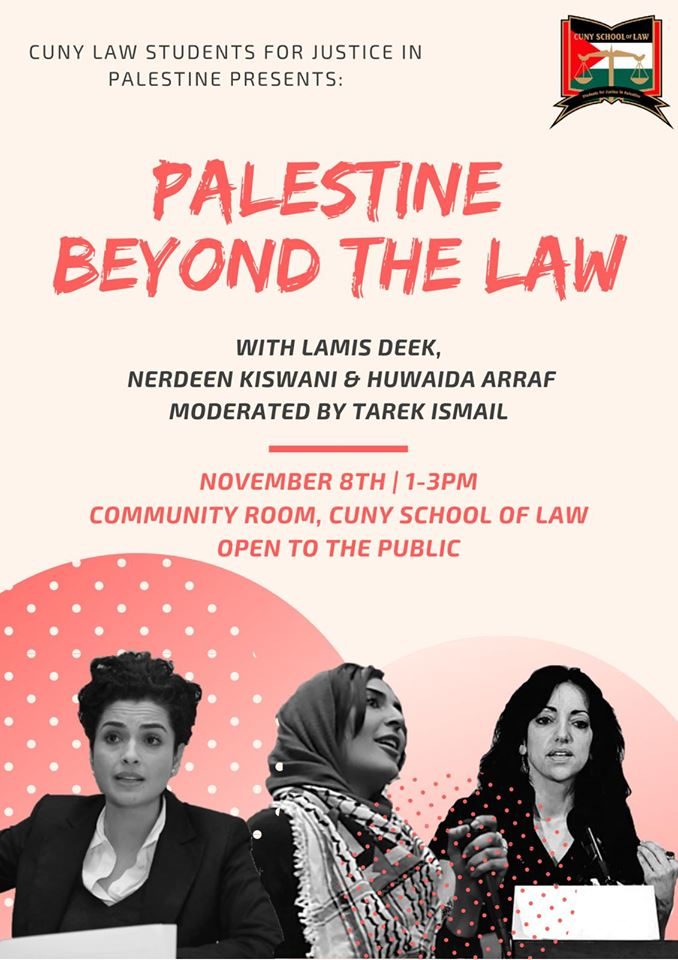 Join CUNY Law SJP on Friday, November 8th for a discussion featuring lawyers and activists Lamis Deek and Huwaida Arraf, and CUNY law student Nerdeen Kiswani, on movement lawyering in the context of the Palestine movement. Our panelists will explore the state of the national movement in Palestine, civil liberty violations and challenges faced by Palestinians, and the legal challenges on an international, domestic, and local scale. Tarek Ismail will be moderating.

Lamis Deek is an attorney and human rights advocate specializing in defending Arab and Muslim community members, activists, and organizers against U.S. government attacks. She’s chief counsel to the Global Justice and Human Rights Law Network, the founder of the Muslim Defense Project of the National Lawyers Guild, and part of the growing international legal movement for war crimes prosecution in the Middle East and North Africa.

Huwaida Arraf is a Palestinian American attorney and human rights activist. In 2001, she co-founded the International Solidarity Movement (ISM), a Palestinian-led nonviolent resistance movement, which has twice been nominated for the Nobel Peace Prize. She was one of the primary organizers of the Gaza Freedom Flotilla and was traveling with it when it was lethally attacked by Israeli forces on May 31, 2010.

Nerdeen Kiswani, a first-year CUNY Law student, is a Palestinian organizer from NYC. She’s a founder and chair of Within Our Lifetime – United for Palestine, a Palestinian led community-based organization.