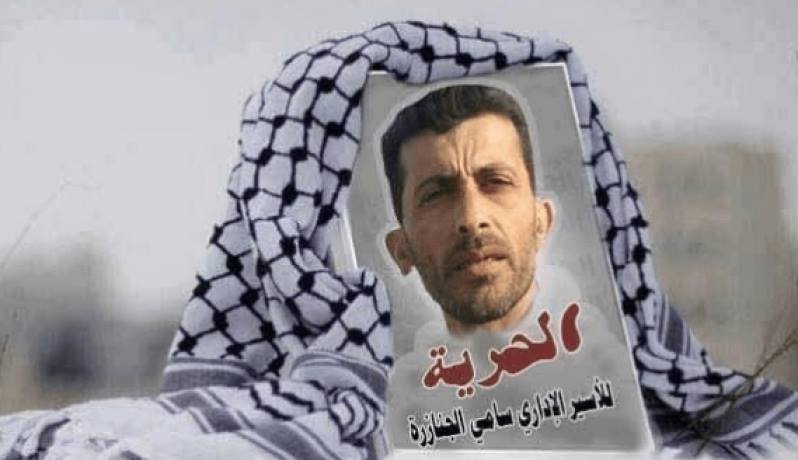 Palestinian prisoner Sami Janazrah, 47, neared his second week of hunger strike as Palestinians and people around the world readied to celebrate Eid al-Fitr on Sunday, 24 May 2020. Janazrah is once again jailed without charge or trial under Israeli administrative detention after conducting two previous hunger strikes to win his release. Janazrah is currently being held in Ela prison, thrown in isolation in retaliation for his hunger strike.

Janazrah was once again abducted by Israeli occupation forces from his home in the al-Fawwar refugee camp south of al-Khalil on 16 September 2019, only 10 months after his last release from 11 months in prison, also under administration without charge or trial. Following his detention, he was issued a four-month detention order by the Ofer military court. Administrative detention orders – a practice first introduced by the British colonial mandate in occupied Palestine and then adopted by the Zionist regime – are based on secret evidence and are indefinitely renewable. There are currently almost 500 Palestinians held in administrative detention, out of nearly 5,000 Palestinian prisoners in Israeli jails.

His detention order has since been renewed twice for an additional four months, the latest detention order sparking the launch of his hunger strike on 11 May 2020. Days before, the Israeli supreme court rejected the appeal of his lawyer against his administrative detention without charge or trial. He has previously launched two long-term hunger strikes against his imprisonment, for 76 days in 2016 and for 43 days in 2018.

He is the father of three children, Firas (16), Mahmoud (12), and Maria (8). He and his wife are awaiting the birth of their fourth child in the coming days, and he had been awaiting his freedom to welcome his new child. He missed the birth of two of his children due to his imprisonment; he has been jailed over the years for a total of 11 years, most of them without charge or trial in administrative detention.

Janazrah’s hunger strike comes as Israeli occupation forces announced the official reopening of the military courts on 24 May 2020. In-person military court sessions attended by the prisoners and at most one family member have been suspended since the first week of March, ostensibly in order to prevent the spread of COVID-19. Prisoners were also denied legal and family visits, with only limited phone calls allowed with lawyers. No indication has been made that legal and family visits will be resumed, despite the fact that prisoners will be put at risk to their health through arduous “bosta” transfers and repeated contact with jailers, guards and military court officials. (Israeli officials have claimed that medical masks will be worn in the military courts.)

Palestinian prisoners and their families have raised very serious concerns that the Israeli prison system may attempt to make these supposed preventative measures the new normal, especially as denial of family visits, suppression of access to lawyers as well as disregard for and medical neglect of Palestinian prisoners’ health are constant and systematic Israeli policies.

While administrative detention without charge or trial is one clear example of Israeli injustice, so too are the military courts, where Palestinians are convicted at rates greater than 99% on an array of bogus and trumped-up charges that criminalize political activity, public speech and student and cultural events, among other actions.