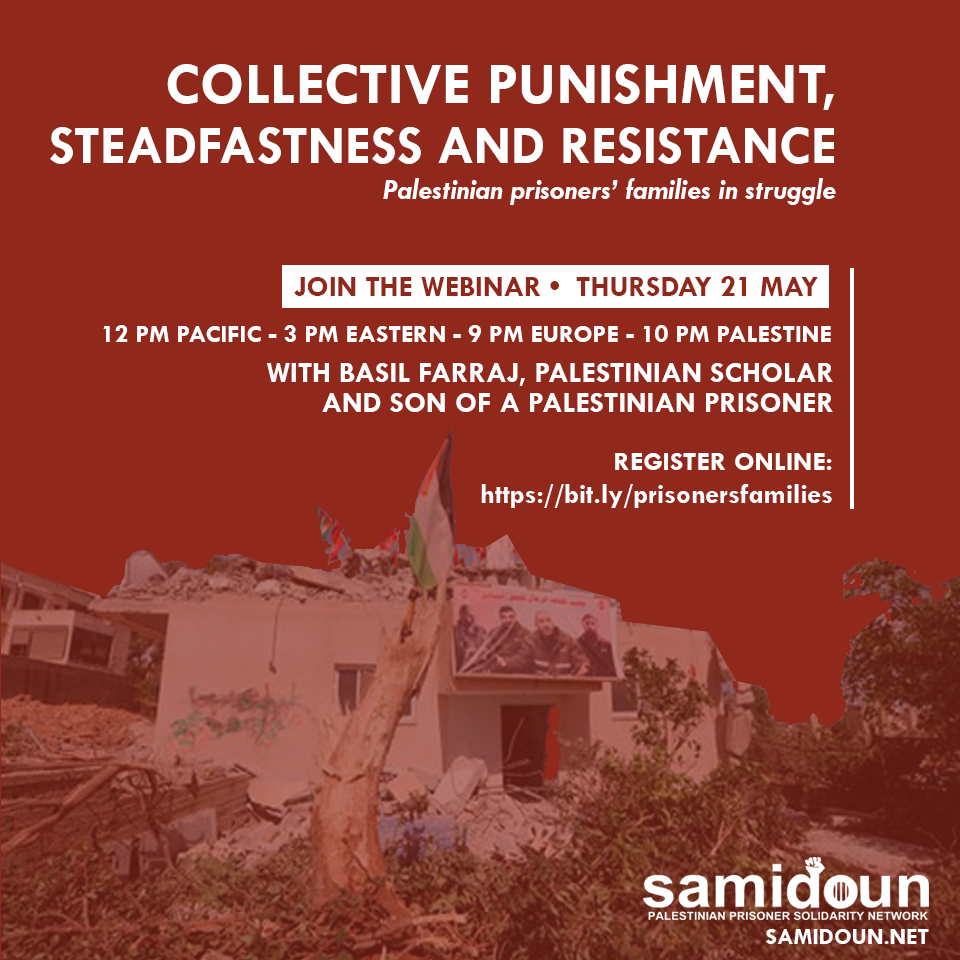 On Thursday, 21 May, Samidoun Palestinian Prisoner Solidarity Network organized a webinar with Palestinian scholar – and the brother and son of two Palestinian political prisoners – Basil Farraj. The discussion, held on Zoom and broadcast live on Facebook, focused on the experiences, struggles, resistance and steadfastness of Palestinian prisoners’ families. Given the widespread nature of incarceration by Israeli occupation prison regimes for Palestinians under occupation, far too many Palestinian families face collective punishment by the Israeli state yet continue to resist with tremendous steadfastness.

Watch the full video of the event:

During the discussion, Farraj presented his experience and those of other prisoners’ families, as well as providing an analysis of Israeli imprisonment of Palestinians as a colonial structure and how the phenomenon of imprisonment stretches beyond the direct prison walls, affecting entire families, communities and the Palestinian people as a whole.

Basil Farraj is a PhD Candidate in Anthropology and Sociology at the Graduate Institute, Geneva and a research assistant for the VIPRE Initiative. Basil’s work focuses on political prisoners, violence directed against them, and ways in which they resist the incarcerating regimes. His work reaches for the intersections of memory, resistance and art by prisoners and others at the receiving end of violence.

Farraj highlighted  Addameer’s “Free Our Prisoners” campaign, which includes the demand for non-monitored family communication, as Palestinian prisoners’ families communication with their loved ones is constantly subjected to surveillance. Abdel-Razzaq Farraj, Basil’s father and a political prisoner, shared his reflections on the experience of detention and imprisonment on the Amnesty International website (also available in Arabic.)

Mohammed Khatib, Europe coordinator of Samidoun, spoke about the Stop Collective Punishment campaign spearheaded by the families of Palestinian prisoners, which has an active Facebook page. He emphasized the failure and complicity of the Palestinian Authority and its representatives internationally in failing to highlight the situation of Palestinian prisoners and neglecting to hold Israel accountable for its ongoing crimes against the prisoners. He also urged a stronger focus on justice for the prisoners in campaigns for boycott, divestment and sanctions against Israel.

Khatib urged listeners to get involved with Samidoun and other efforts to support the prisoners, including the cases of Palestinian student organizers detained by Israel, urging attention to this issue by student unions globally.

Wrapping up the conversation, Charlotte Kates, international coordinator of Samidoun, highlighted some ongoing and upcoming actions for people to join, particularly the 1 June Day of Action for Ubai Aboudi, a Palestinian-American researcher and the executive director of Bisan Center, detained by Israeli occupation forces since late 2019.

Hind Shraydeh, Palestinian writer and the wife of Ubai Aboudi, spoke in an earlier webinar about some of the issues in this discussion and highlighted the case. Watch the full video here:

Scientists for Palestine has issued a new petition for Aboudi, which has already been signed by prominent academics and scientists and is welcoming additional signatories.

On Saturday, 24 May, there will be an Arabic-language webinar organized by Samidoun Palestine and partners (PYM, HIRAK, Al-Naqab Center) on arts, culture and the Palestinian revolutionary alternative, with speakers Hafez Omar, Lina Abojaradeh and Kamal Khalil. The event will take place at 11 am Pacific, 2 pm Eastern, 8 pm central Europe, 9 pm Palestine time. Zoom link: https://us02web.zoom.us/j/86133364893