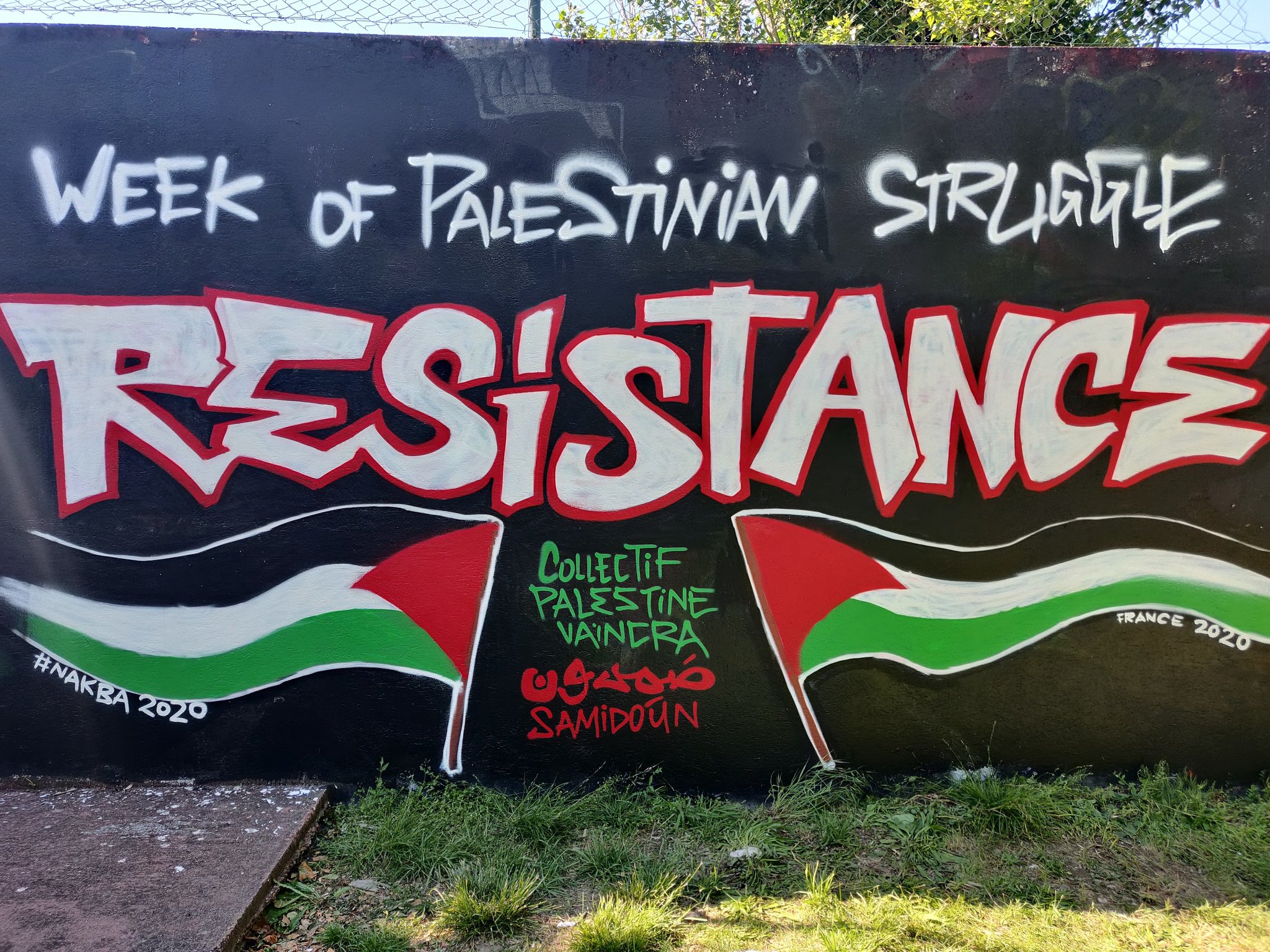 Organizers and activists marked the Week of Palestinian Struggle with a series of events and actions in cities around the world. Amid the COVID-19 pandemic and severe restrictions on gatherings in many places, organizations developed creative mechanisms to take a visible, public stand for justice and liberation in Palestine in many places, including actions in Toulouse, Frankfurt, Amsterdam, Gothenburg, Minneapolis, Chicago, Istanbul, Montpellier, Berlin and Vancouver.

These events included commemorations of the 72nd year of the continuing Nakba, celebrations of Palestinian struggles for freedom, artistic and cultural interventions, protests and demonstrations, car caravans and other activities. They were organized by a wide range of groups and organizations in cities and areas around the world.

The Week of Palestinian Struggle also included a wide range of online actions, from the #KeyToJustice, #Nakba72 and #FlyTheFlag Twitter campaigns to a broad array of webinars and online discussions and educational events. Organizers held Nakba commemorations, protests against Israel/U.S. annexation plans, and commemorations of Al-Quds Day. All credit for each action belongs to the organizers, as noted below.

We are aware that this list is not exhaustive, but does represent the resilient, steadfast and resisting voice of Palestine for return and liberation despite all circumstances. If you would like to include your action on this list and it is not already present, please email samidoun@samidoun.net. 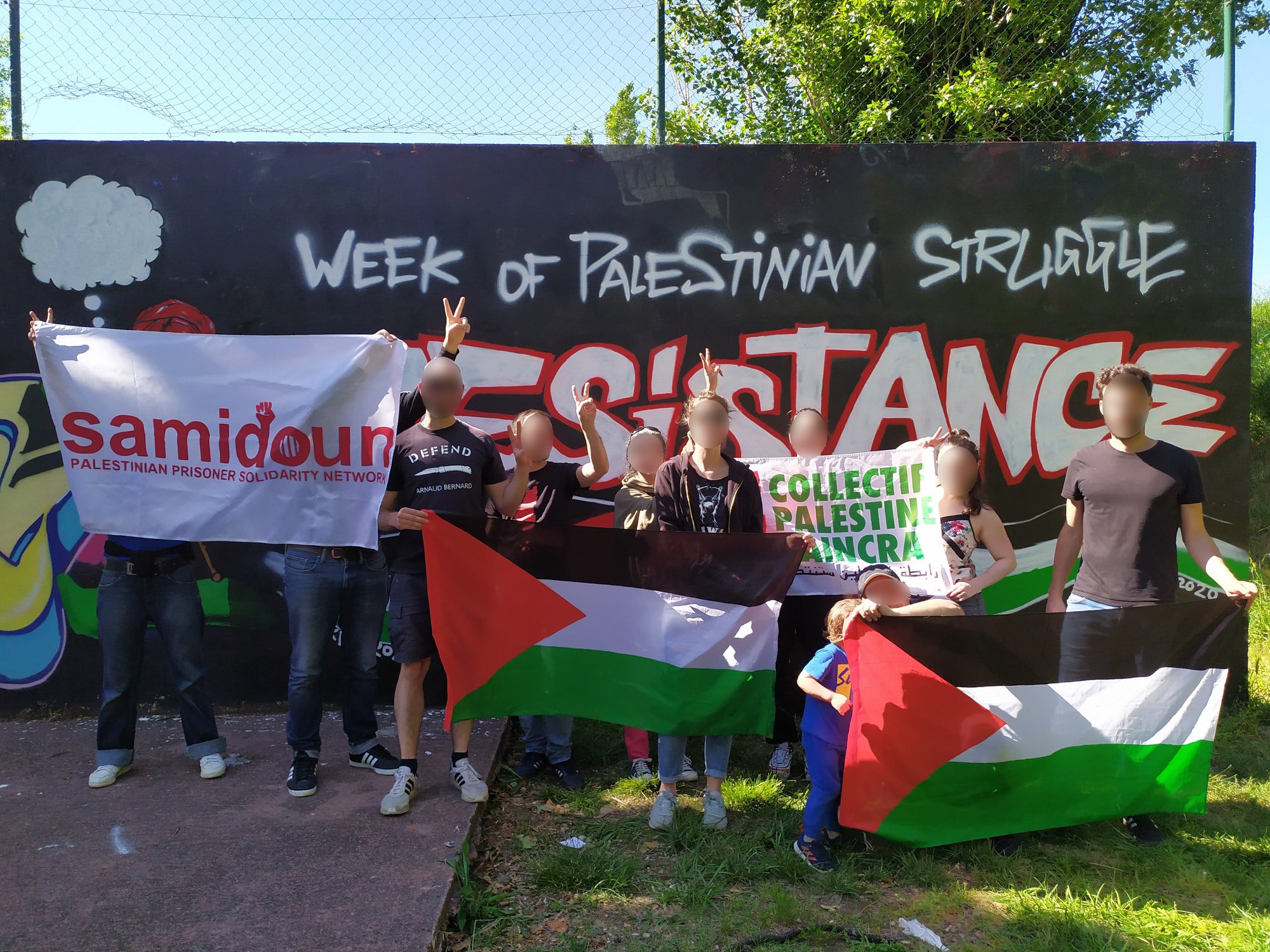 In Toulouse, France, the comrades of the Collectif Palestine Vaincra (a member organization of the Samidoun Palestinian Prisoner Solidarity Network) organized an array of visible interventions around the city, including murals, graffiti and posters highlighting the Week of Palestinian Struggle. 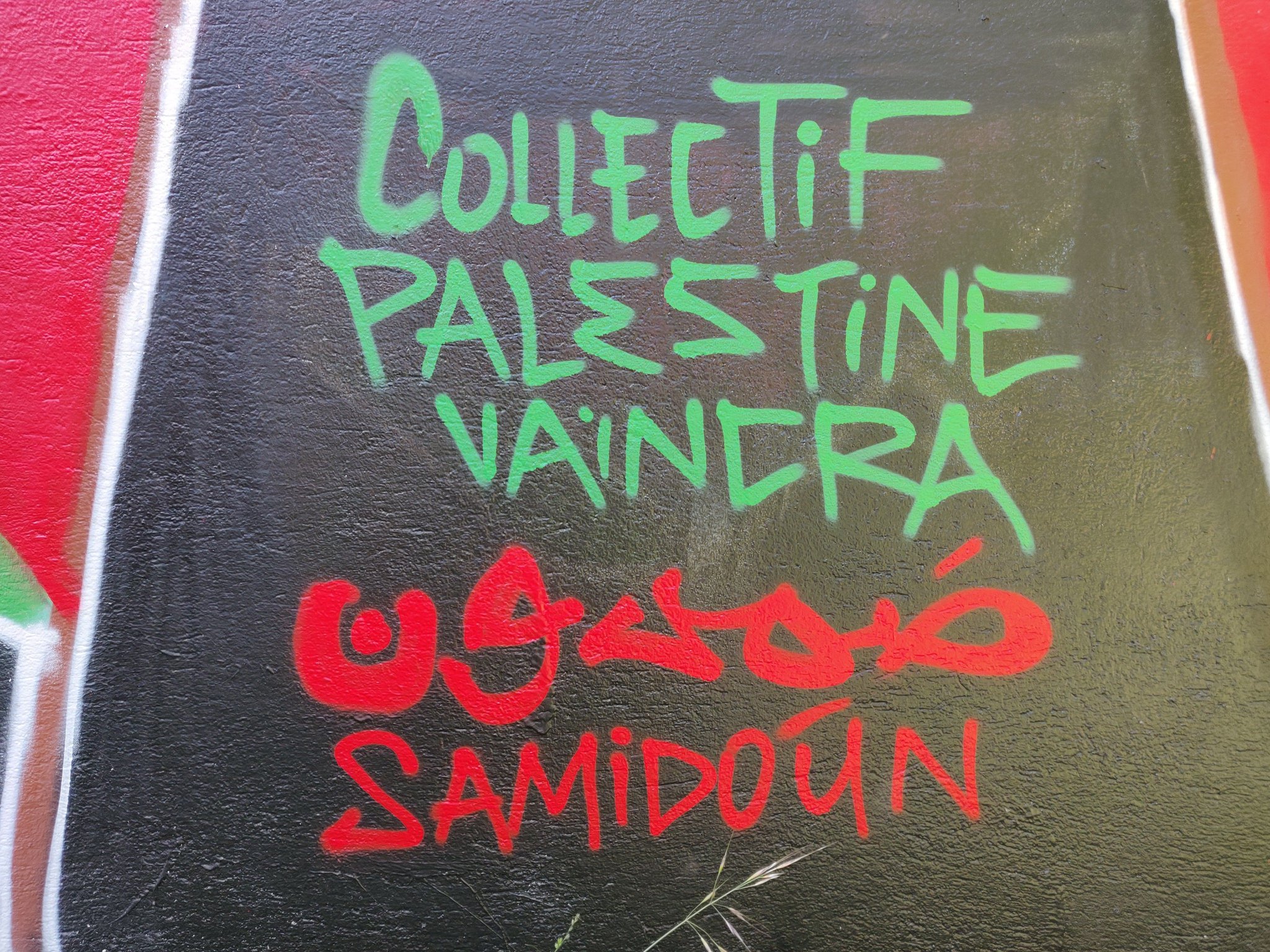 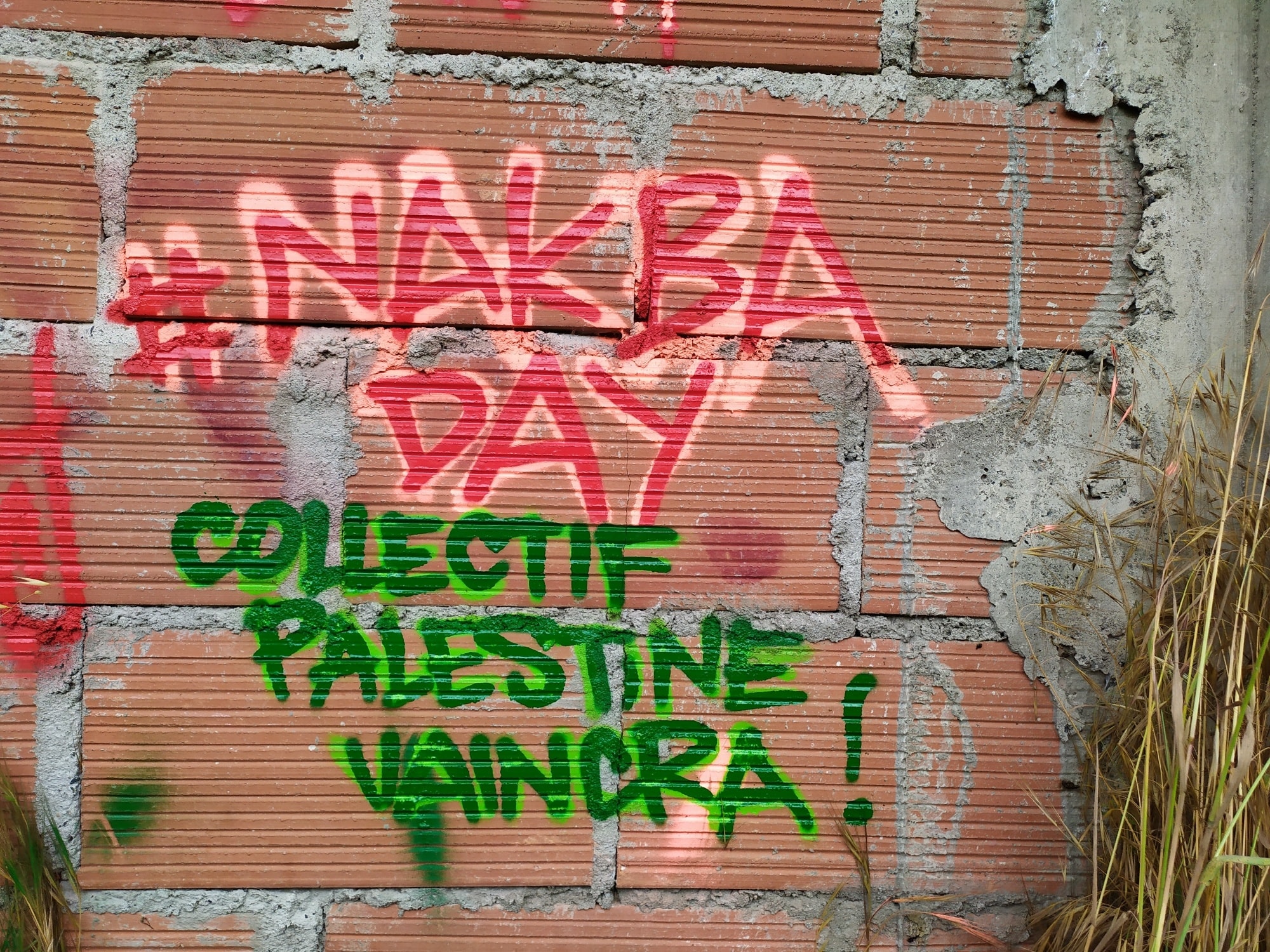 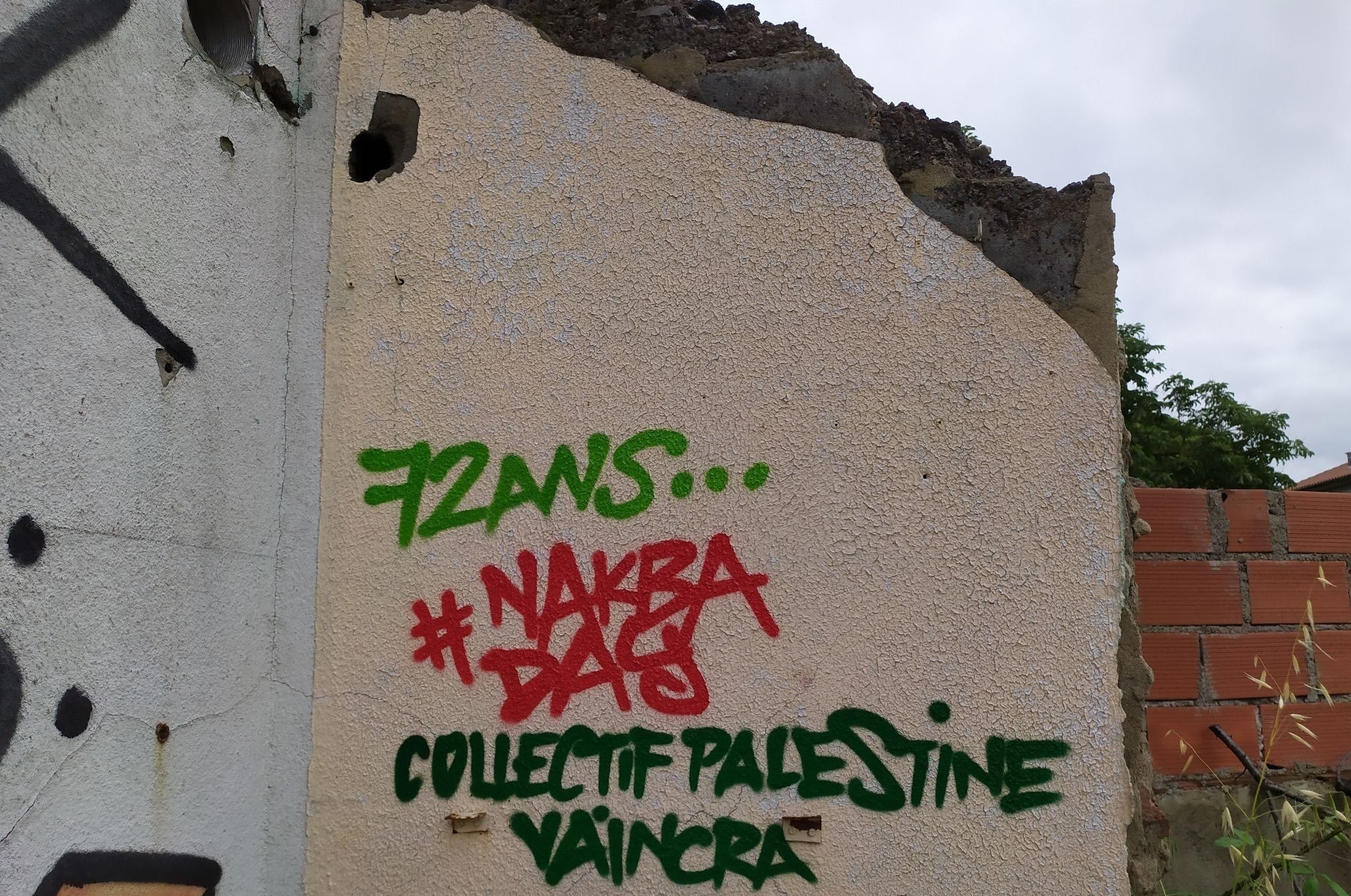 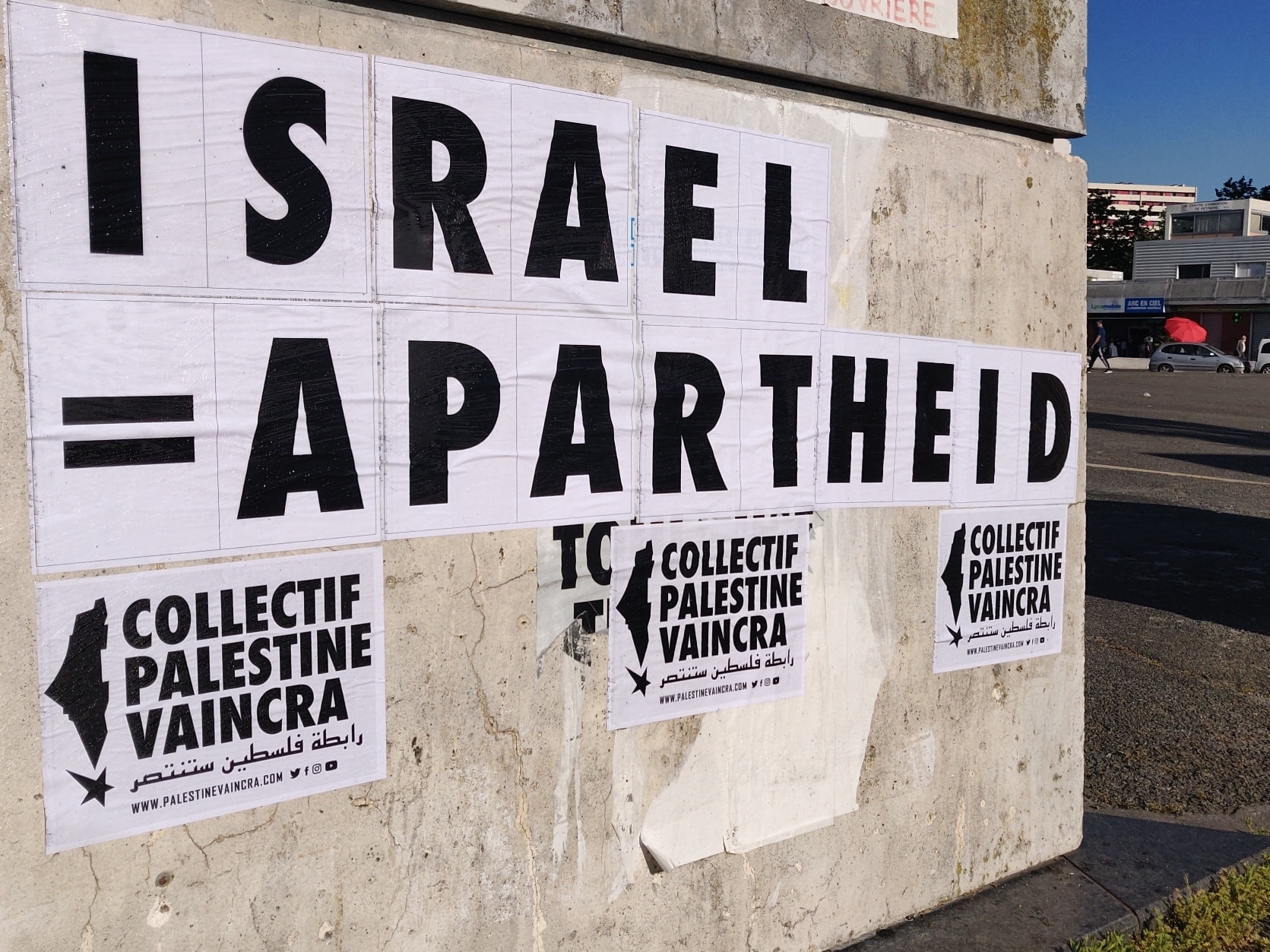 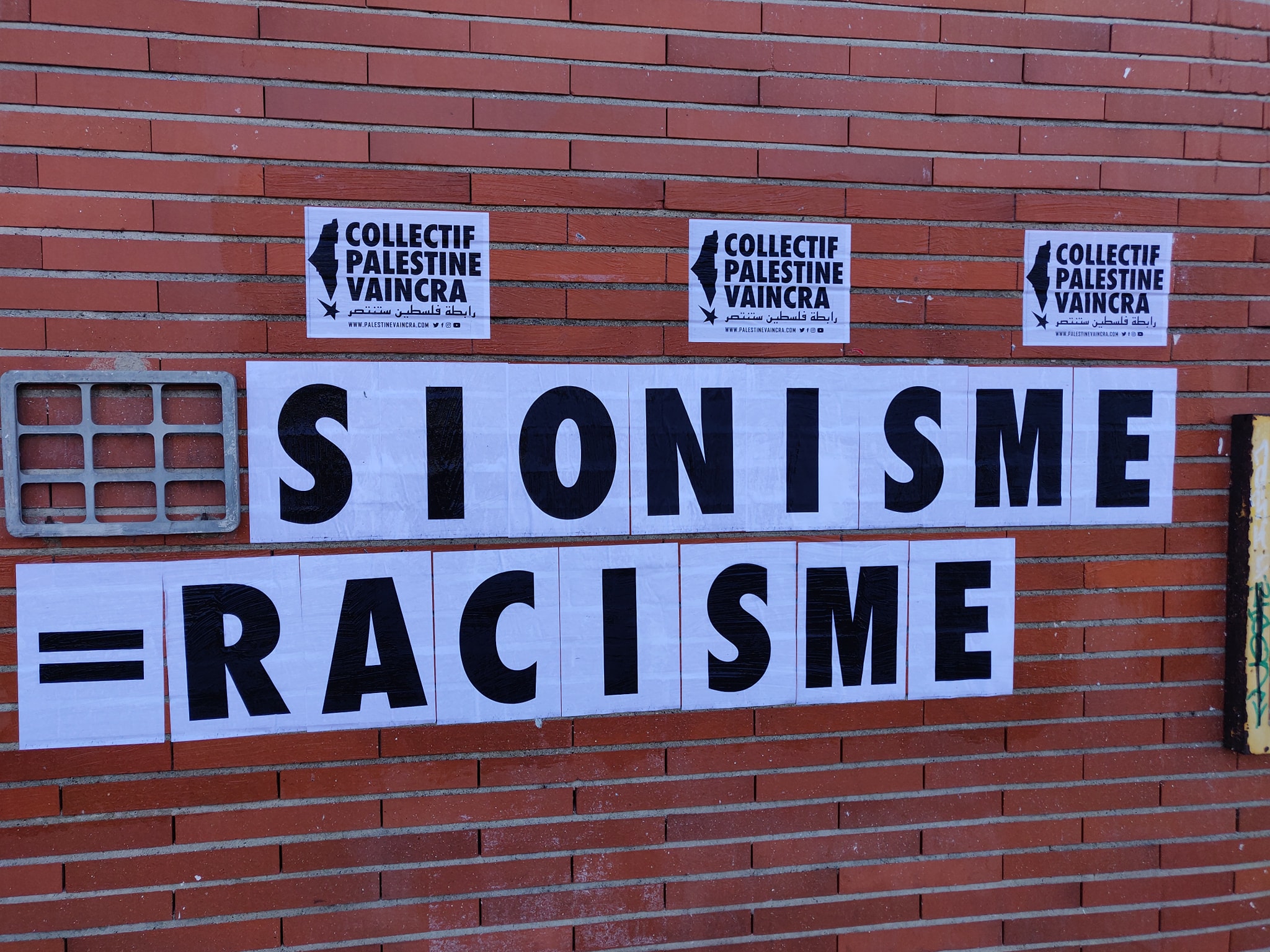 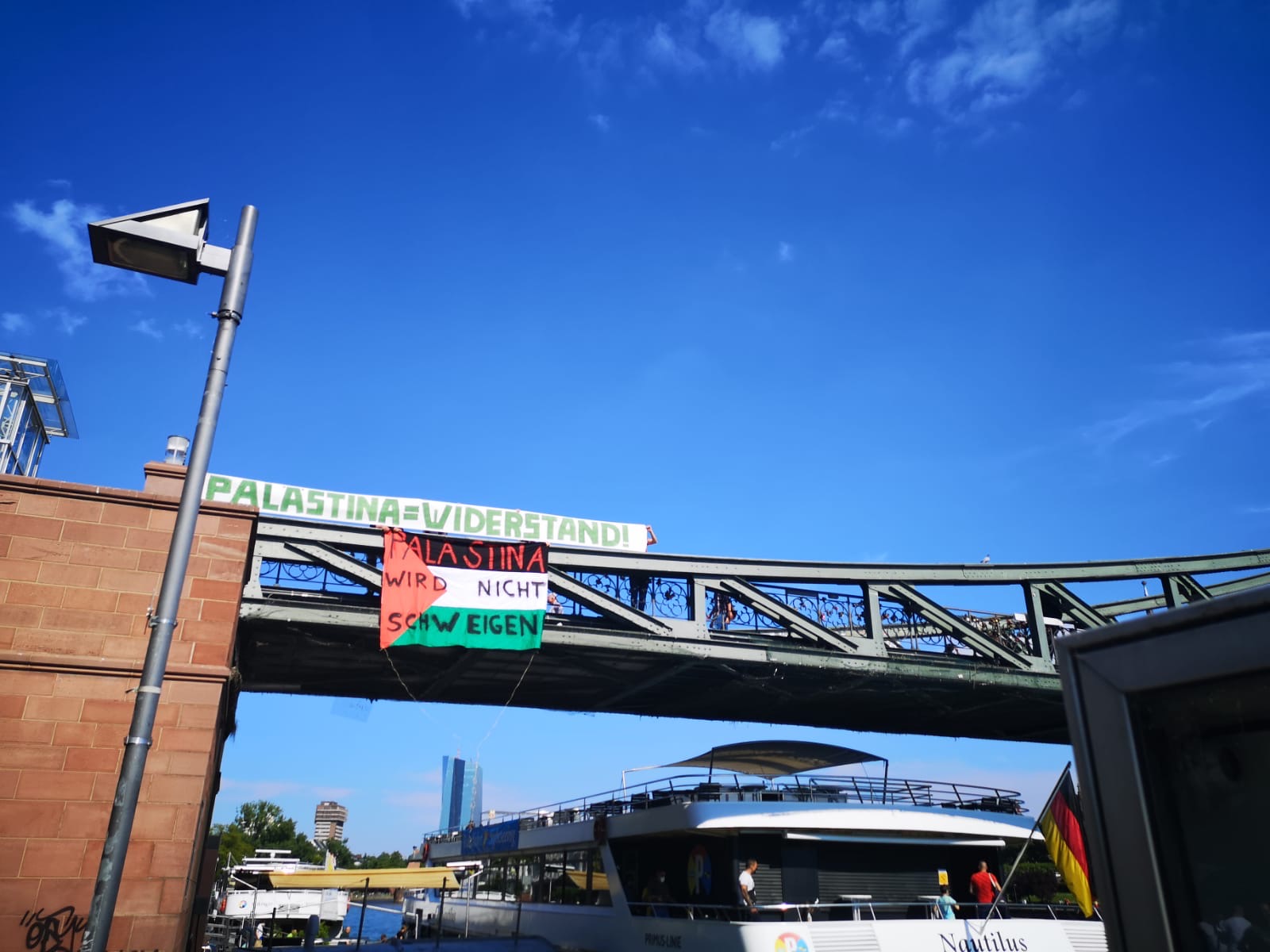 In Frankfurt, Free Palestine FFM organized a week of action in line with the call for the Week of Palestinian Struggle, providing resources in German about the Nakba and ongoing Palestinian resistance and struggles. 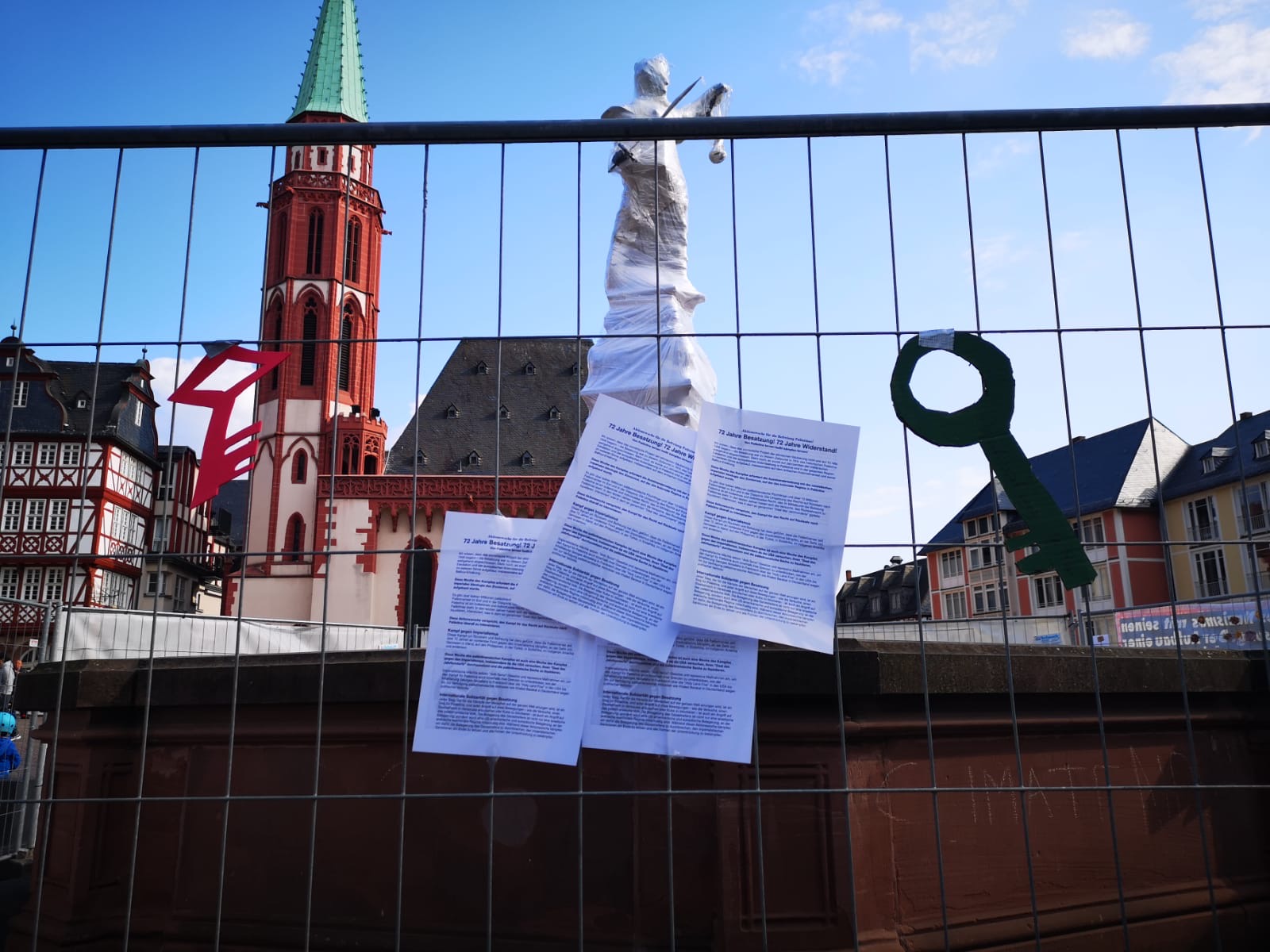 They called on supporters and friends of Palestine to post images and flyers around the city to highlight the ongoing Palestinian struggle for liberation and return. 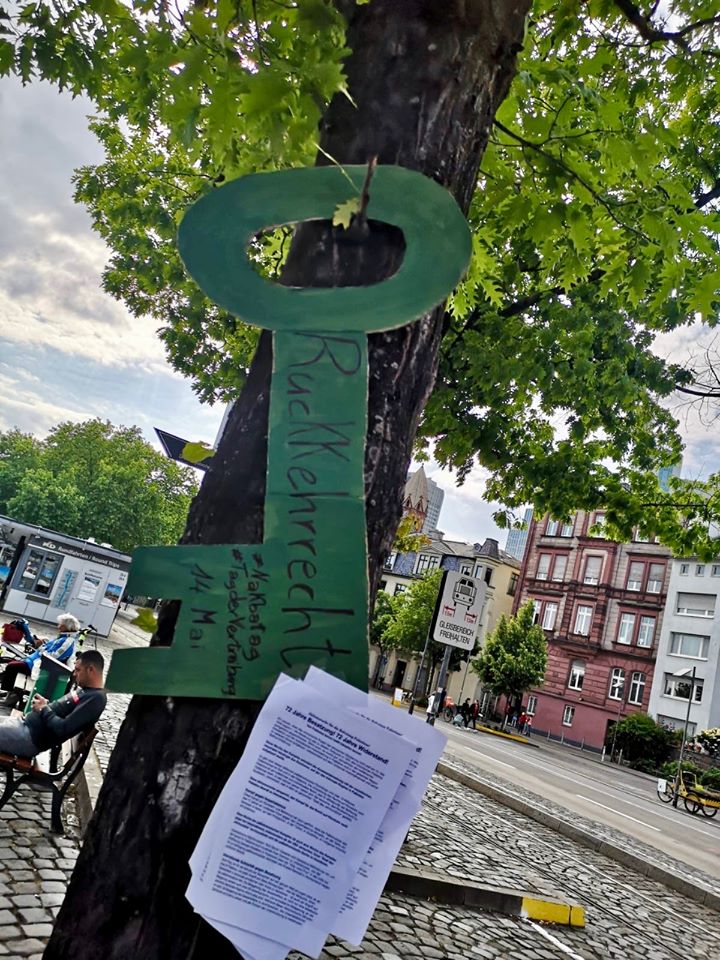 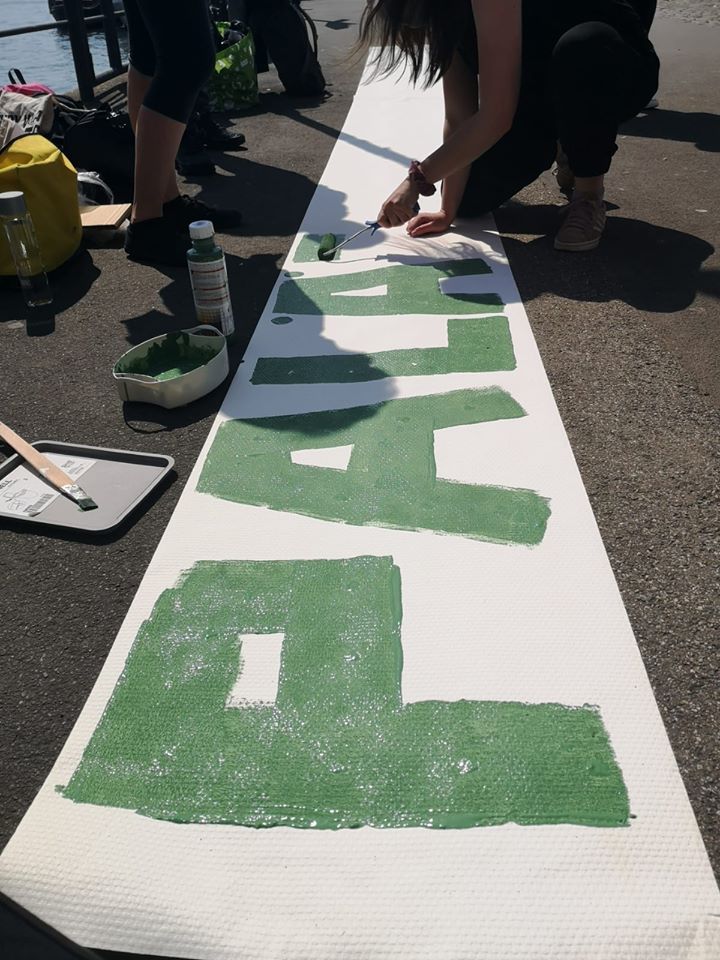 Comrades dropped two massive banners at the Iron Bridge, highlighting Palestinian struggle. One read, “Palestine = Resistance” and the other “Palästina wird nicht schweigen!” (“Palestine will not be silent!”) in a major display of Palestine solidarity in a highly visible location:

Ongoing displays of visibility for Palestine were organized throughout the week, including small sprayed images of the map of Palestine, slogans against the imprisonment of Palestinian children and the image of Handala:

Organizers hung keys of return, banners for Palestine and information about the week of struggle in prominent places throughout Frankfurt, highlighting 72 years of Nakba and resistance:

On Friday, 14 May, comrades of Samidoun Netherlands gathered in Amsterdam to mark the 72nd anniversary of the Nakba and the Week of Palestinian struggle, lighting flames of remembrance and struggle and holding banners, Palestinian flags and signs with slogans: “Zionism is Racism,” “Free Palestine,” and more.

“Palestinians have the right to resist – and we will defend that right at all costs!” declared the opening speaker representing Samidoun Netherlands. Participants highlighted the struggles of Palestinians in the refugee camps continuing to uphold their right to return to Palestine. “From the river to the sea, Palestine will be free!” 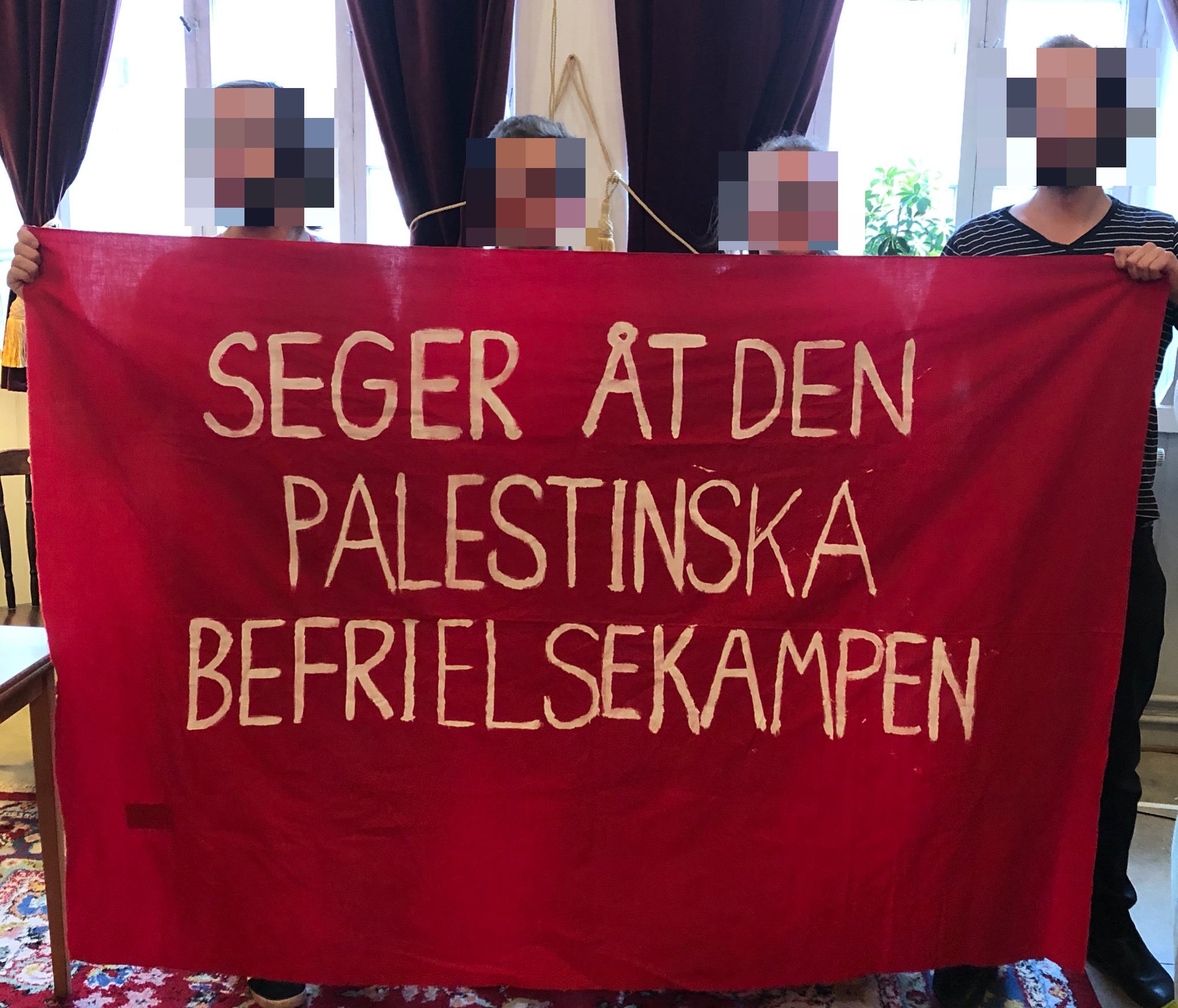 On Thursday night, 14 May, Samidoun Gothenburg organized a film screening at the Syndikalistiskt Forum about Israeli apartheid and 72 years of Nakba, while holding a banner with the slogan “Seger åt den Palestinska Befrielsekampen!” (The Palestinian Liberation Struggle will be Victorious!) 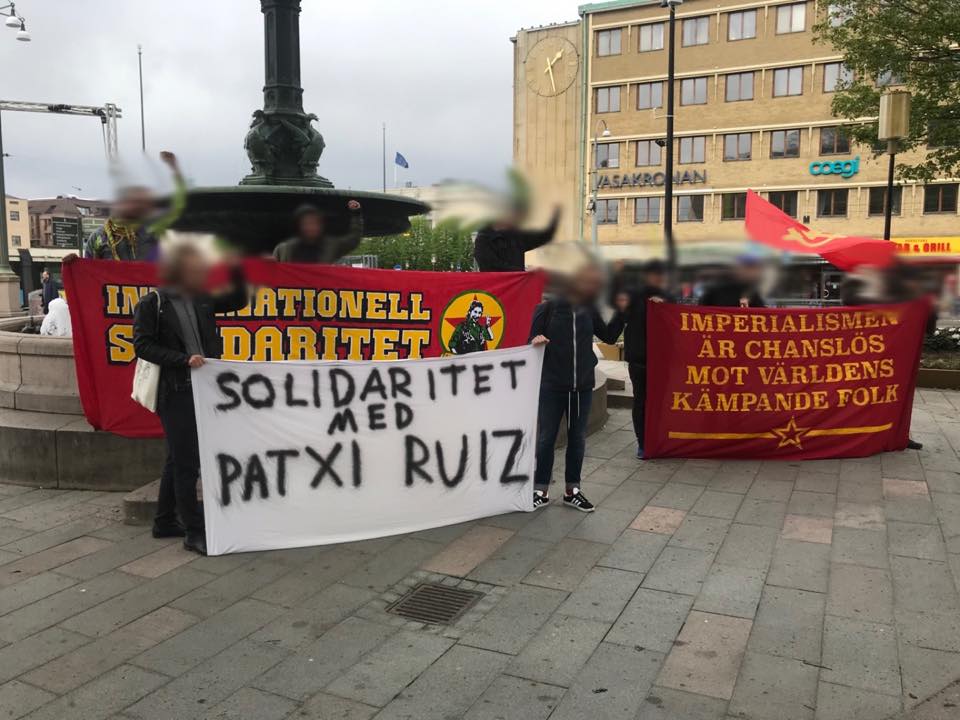 Later, on 23 May, Samidoun Gothenburg joined several other organizations, including Irlandinformation, Rojavakommittéerna and Kurdish Democratic Society Center – Navenda Civaka Demokratîk a Kurd for a flash rally in downtown Gothenburg in support of Basque political prisoner Patxi Ruiz, on hunger strike against the Spanish state. 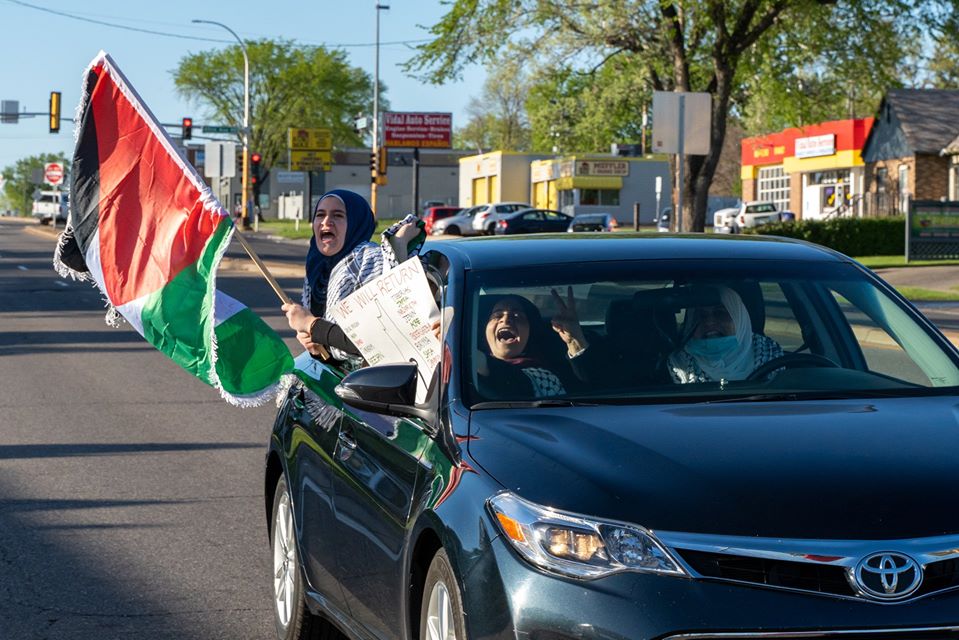 Around 60 cars carrying dozens of families joined in a Nakba commemoration car caravan in Northeast Minneapolis, organized by the Anti-War Committee and American Muslims for Palestine – Minnesota. 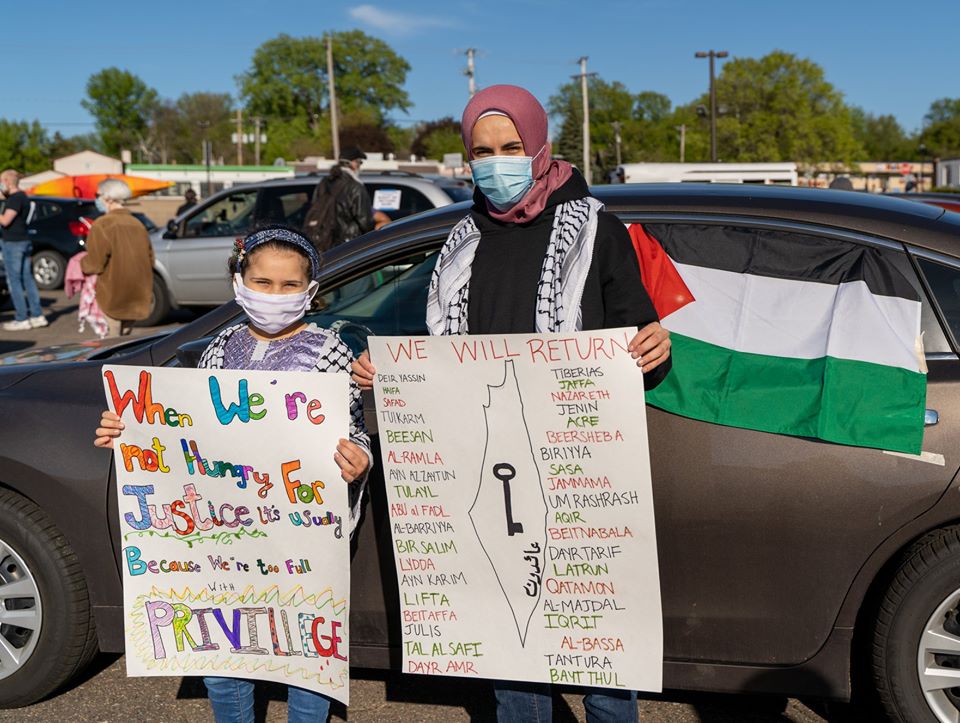 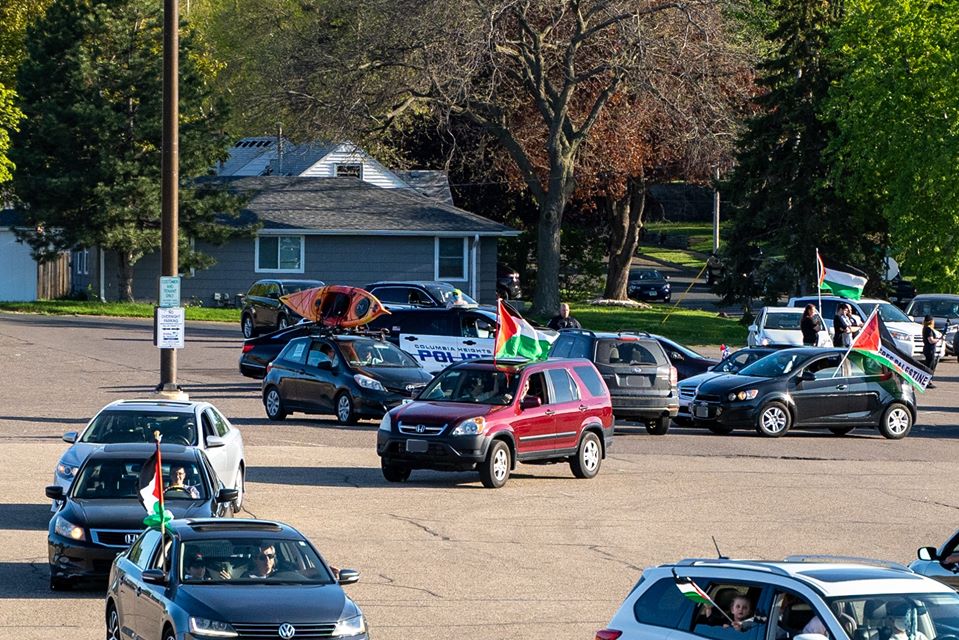 The caravan proceeded down Central Avenue in an Arab-American neighborhood as participants chanted, “From the river to the sea, Palestine will be free!” Before the rally launched speakers highlighted 72 years of Nakba and 72 years of Palestinian resistance.

On Friday, 15 May, the US Palestinian Community Network organized a car caravan to Chicago’s Federal Plaza to commemorate the 72nd anniversary of the Nakba. Cars gathered at the offices of the Arab American Action Network draped with signs and Palestinian flags and traveled to downtown Chicago, bearing a clear message that Palestinians in Chicago continue to remember the Nakba and struggle for return:

One week later, on Friday, 22 May, an Al-Quds Day Car Caravan also wound through Chicago. Hundreds of Chicagoans launched from Mallard Lake to fly the Palestinian flag and carry the message of freedom and justice for oppressed people, organized by People United Against Oppression and other groups: 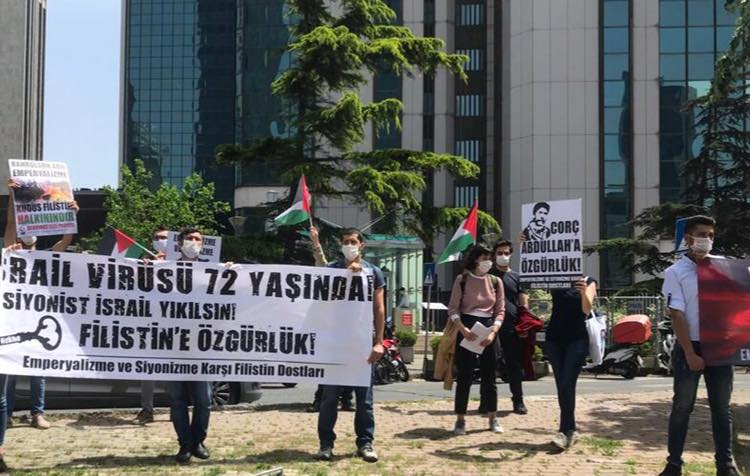 In Istanbul, Emperyalizme ve Siyonizme karsi Filistin dostlari (Friends of Palestine against Imperialism and Zionism) held a rally outside the Israeli embassy in Turkey on 15 May, marking the 72nd anniversary of the Nakba. The rally drew widespread press coverage and attention, and the organizers read out a statement highlighting 72 years of Nakba and resistance. 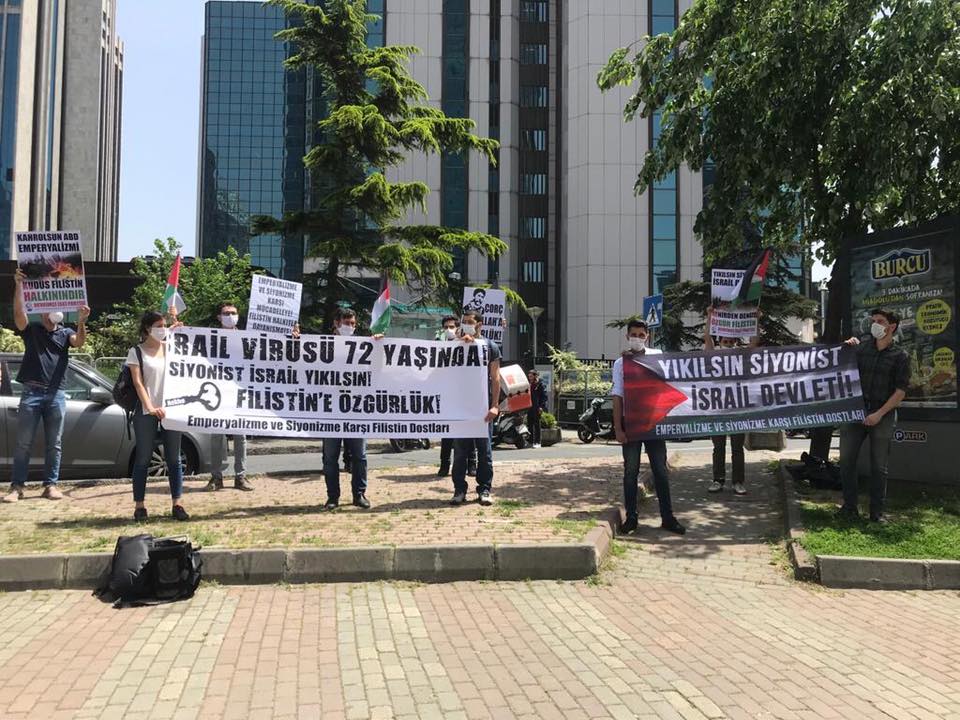 The organizers also highlighted the struggle of Palestinian prisoners, especially the case of Georges Ibrahim Abdallah, jailed for 35 years in French prisons. One speech in French and Turkish focused specifically on this case, as did several signs and banners at the event:

On Saturday, 16 May, members of the Campagne BDS France Montpellier gathered for their usual stand, gathering at a social distance and with only 10 people, in accordance with health regulations for gatherings. Nonetheless, police dispersed their small group and confiscated their Palestinian flags. They pledged to resist and return one week later to Place de la Comedie for continued actions, and captured their solidarity stand – highlighting refugees’ right to return, 72 years of Nakba, and Palestinian prisoners – on video: 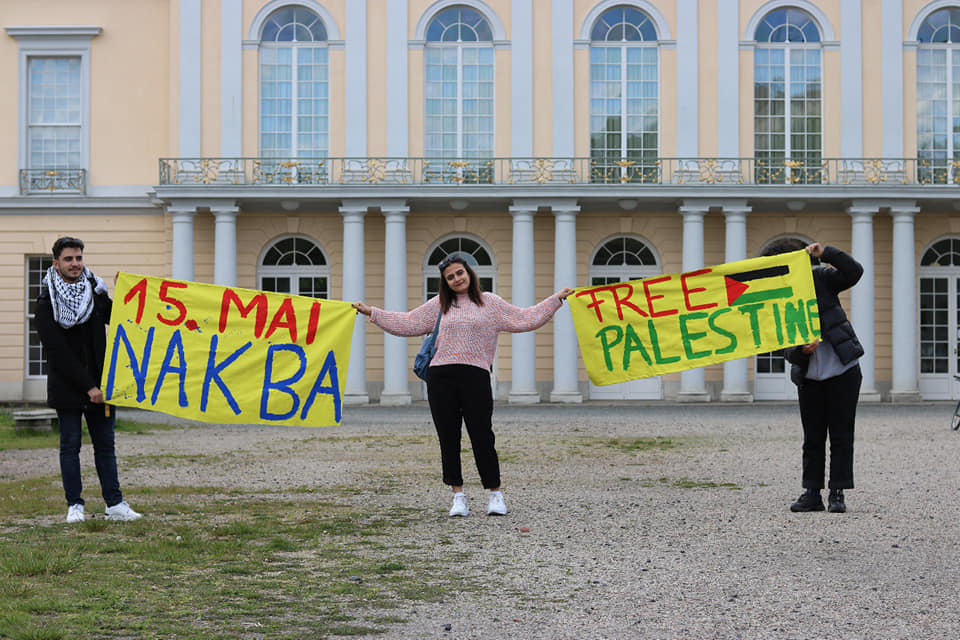 Protesters gathered in several locations in Berlin on 15 May to mark 72 years of Nakba and support the ongoing Palestinian struggle, including members of Palästina Spricht Palestine Speaks and members of various Palestinian community organizations.

The protest outside the Brandenburg Gate was significantly smaller than typical Nakba protests in Berlin due to gathering restrictions related to the COVID-19 pandemic, but speakers affirmed their commitment to return to Palestine outside the U.S. embassy.

The Revolutionary Student Movement – Vancouver highlighted the struggle of the Palestinian people, posting tagged graffiti that depicted the flag of the Popular Front for the Liberation of Palestine and the slogan, “Exist, Resist, Return” 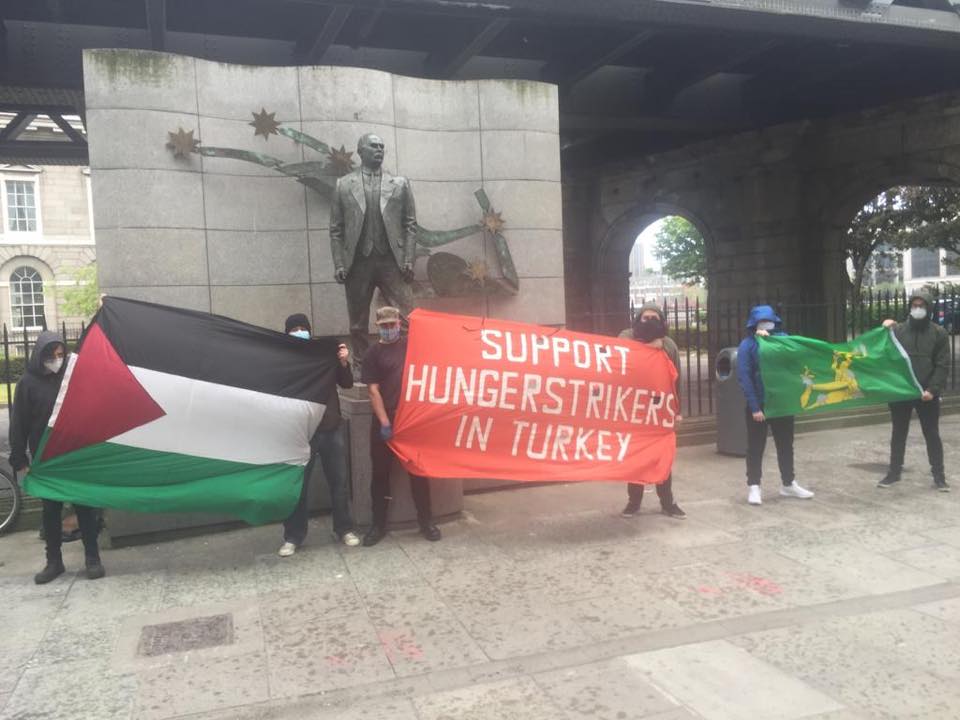 On Friday, 22 May, Anti Imperialist Action Ireland organized a solidarity vigil in support of Palestinian political prisoners, Grup Yorum and the prisoners on hunger strike in Turkish jails. As the organizers noted, “The plan had been to hold the event at the Turkish and Zionist Embassies in Ballsbridge, However the Free State demonstrated their support for Turkish Fascism and Zionism Placing a ring of steel around the location.In an attempt to prevent the solidarity action at the behest of the NATO Powers, Free State Police closed Raglan Road in Dublin 4 to the public, establishing checkpoints at both ends while the Political police stoped and harassed Socialist Republicans in an attempt to order them to leave the area.”

However, as the organizers noted in their report, “a delegation of Socialist Republicans regrouped undeterred at the James Connolly Statue at Beresford Place, the historic location of the establishment of the Irish Citizen Army in 1913 and fitting as Connolly was a Proletarian Internationalist and held the solidarity vigil without interference and with support from passing motorists. Solidarity was extended to #GrupYorum and with those who remain on Hungerstrike in Turkey as well as to All Palestinian Political Prisoners, as part of the international callout by Samidoun, the Palestinian Prisoners Network.”

“Attempts by the Free State, Zionism and Turkish Fascism to prevent this action failed. The response of the state however demonstrated the Free States fear of a vibrant and growing Socialist Republicanism.”

“Anti Imperialist Action will continue to organise in support of our international comrades while at the same time continuing to combat and resist Free State Counter Revolution and Foreign Imperialism in Ireland.”