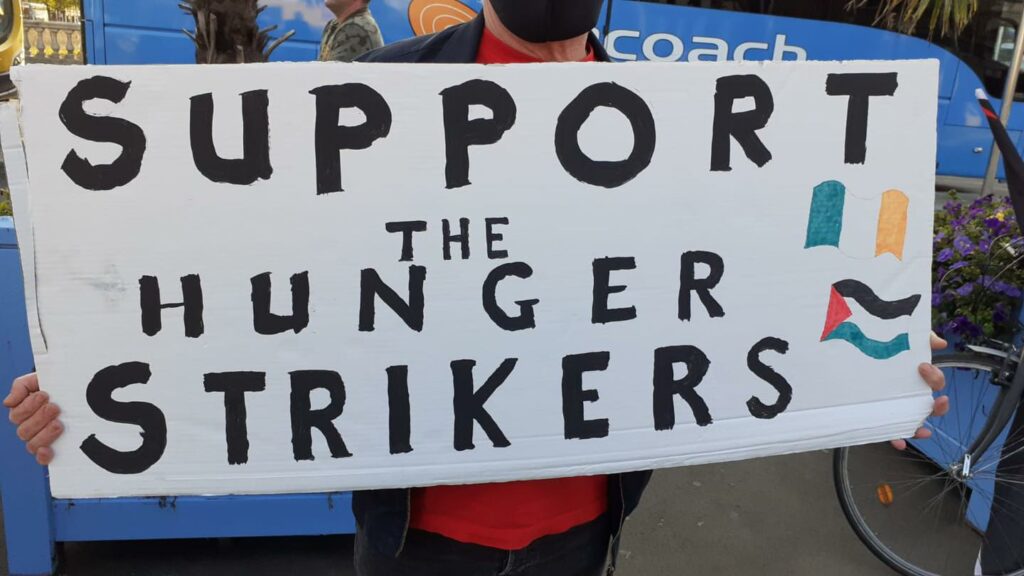 The hunger strike of Irish republican prisoners and Dr Issam Hijjawi Bassalat is escalating in British prisons in the north of Ireland, as over 50 prisoners have joined the hunger strike to demand an end to isolation for Issam Hijjawi, a Palestinian community leader who was seized along with the Saoradh 9 in a series of attacks on Irish republicans.

Dr Hijjawi Bassalat was taken from his detention cell for much-needed health testing; however, when he returned, he was once again put in isolation for 14 days. While the prison administration has justified this on the basis of COVID protections, Irish republican prisoners have noted that non-political prisoners have been taken for health reasons and returned to collective detention, without being held in isolation for another 14 days. Dr. Hijjawi Bassalat was also denied bail on 16 September due to the political charges against him and the Irish republicans.

On Tuesday, 22 September, an online webinar with Stephen Murney of Saoradh, Palestinian community organizer Yousef Qandeel and Irish diaspora organzer Micheáilín Butler will focus on the case of Issam Hijjawi Bassalat and the Saoradh 9. The webinar will take place at 10 am Pacific time, 1 pm Eastern time, 6 pm Ireland time and 8 pm Palestine time. To join, please register at https://bit.ly/prisonersolidarity

“As the illegal occupation attempts to hide its proverbial head in the sand to the harsh reality in Ireland today, there are over 50 Republican Prisoners on hungerstrike only ingesting water.

It comes as no surprise as the occupations MI5 directed gaol administration has effectively ripped up the negotiated 2010 August Agreement and is clearly intent on upping the ante, refusing to listen to logic in response to the utterly absurd position in relation to anti imperialist prisoner, Dr Issam Hijjawi.

Issam, along with 50 Republican Prisoners throughout Ireland are embarking on their sixth day of hungerstrike. The difference being Issam is being needlessly held in the filth and squalor of the occupations Foyle House in intense pain, unable to sit or lay down as the pain is unbearable. On top of this, he is enduring the harsh effects of not eating.

There is no logic to Issam being held in the occupations Foyle House as over the past two week period, two loyalist prisoners were taken to outside hospitals and returned to loyalist Bush House. They were not forced to endure the 14 day, 24 hour lock up due to “COVID isolation”. This is clear proof that the occupiers MI5 led gaol administration is using the isolation of Issam as a tool to persecute Republican Prisoners. This disproves the false narrative of the occupation.

Is it only Republican Prisoners that go to hospital and be sent to the squalor and filth of Foyle House?

Clearly logic is wasted on the illegal occupation.”

The Red Nation issued a solidarity statement in support of the prisoners, noting that “We demand the freedom of all political prisoners in Palestine and Ireland, and call upon their supporters to organize solidarity actions.”

Meanwhile in Glasgow, the IRPWA and the Revolutionary
Communist Group protested on 20 September, demanding freedom for the hunger strikers:

Samidoun Palestinian Prisoner Solidarity Network supports the hunger strike of Dr. Issam Hijjawi Bassalat and the Irish Republican prisoners. We call for their immediate release and demand that they are able to await their court case in freedom, and we call for the dropping of these unjust charges resulting from an entrapment scheme. We urge all supporters of Palestine to join us and organize solidarity actions.