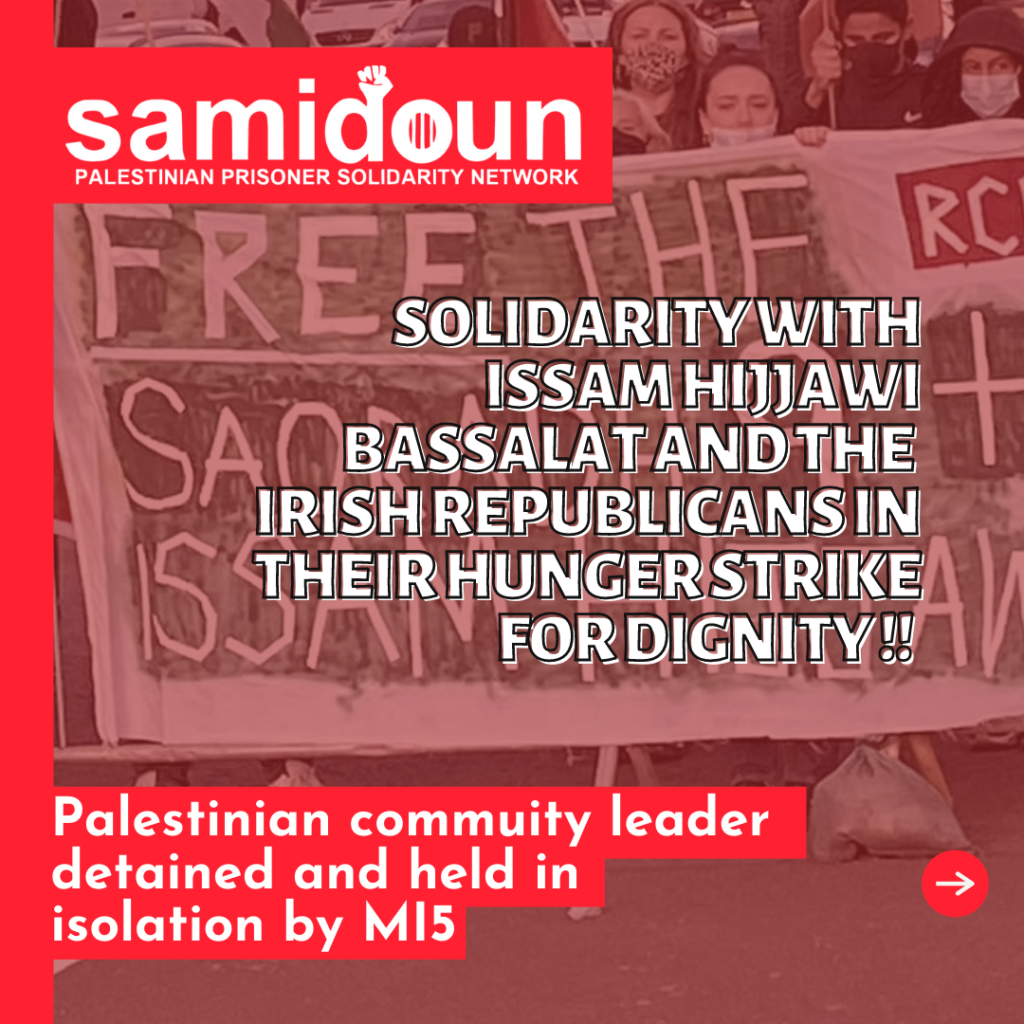 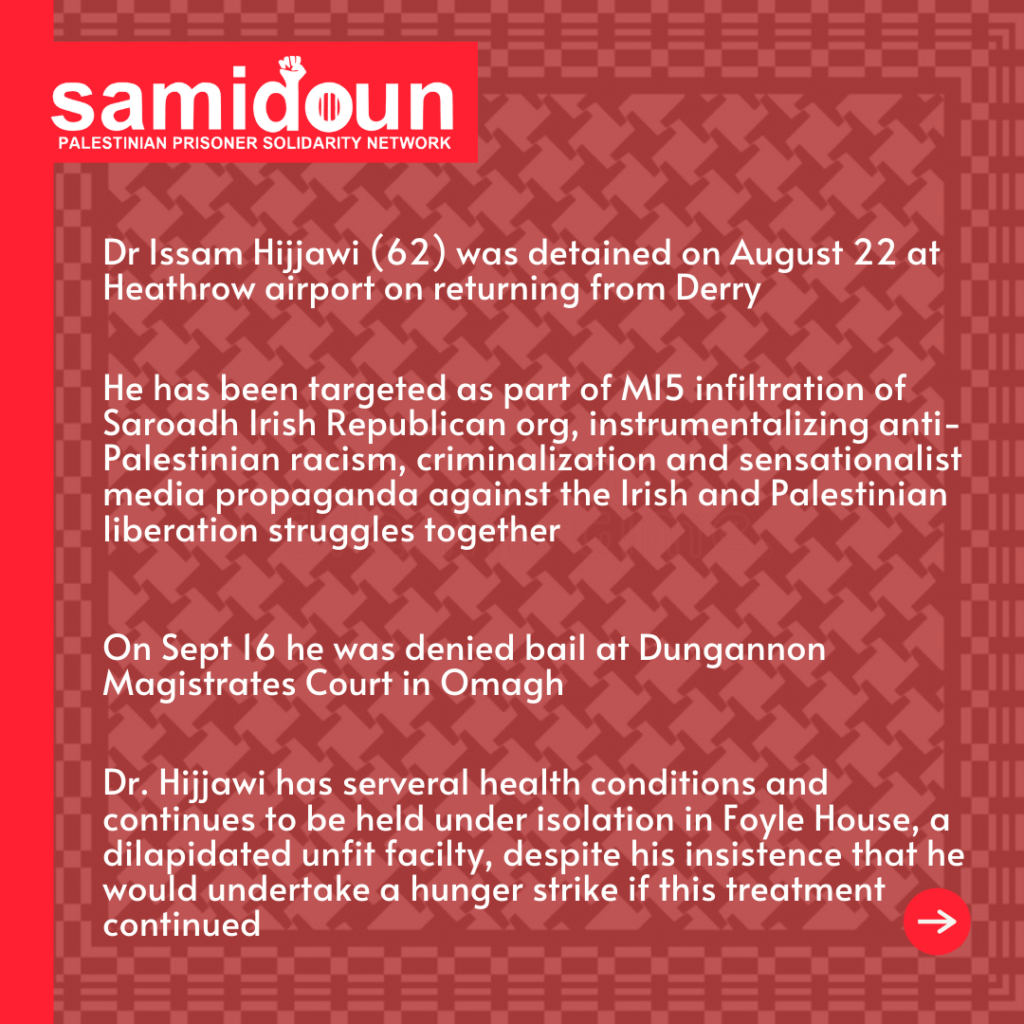 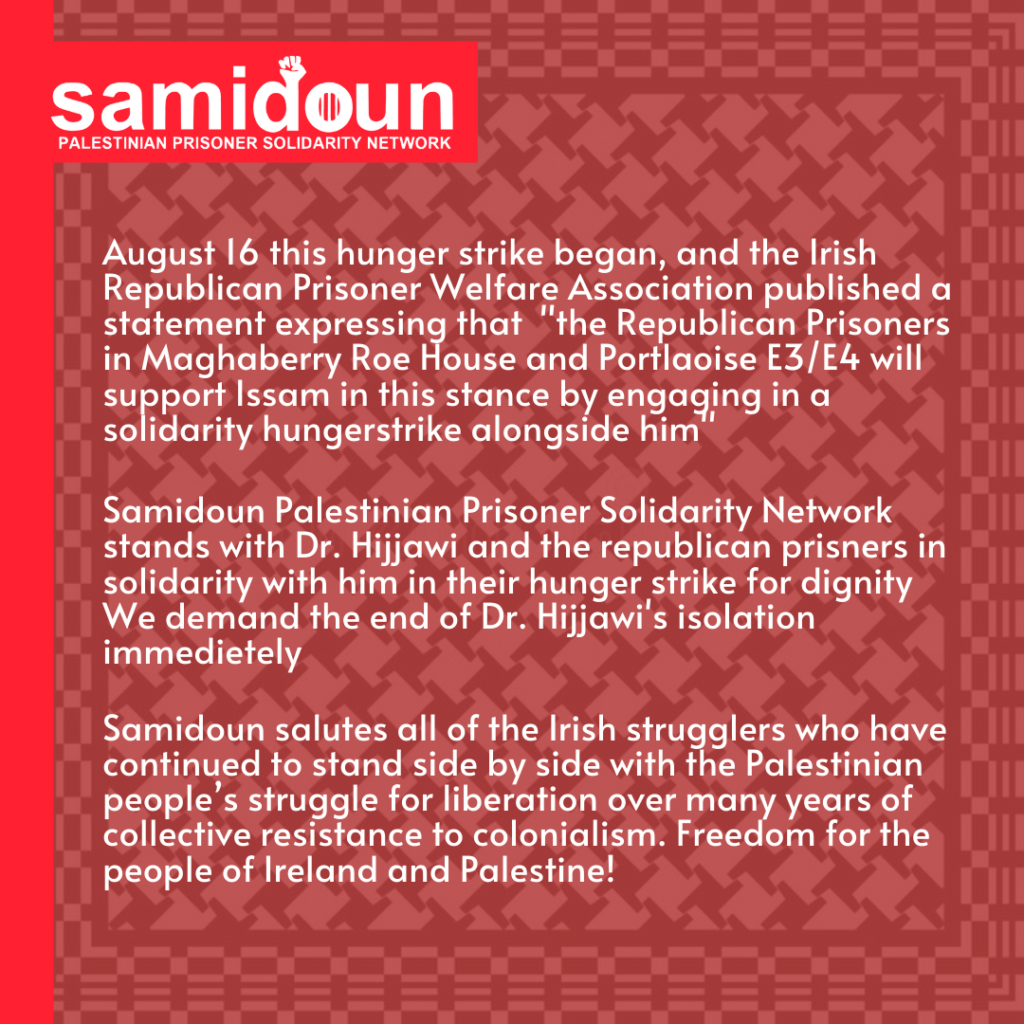 As Samidoun Palestinian Prisoner Solidarity Network we stand full solidarity with Dr. Issam Hijjawi Bassalat and the Irish Republican prisoners, who have started a hunger strike on 16 September as protest against the isolation of Dr. Hijjawi Bassalat by the prison authorities. Dr. Hijjawi Bassalat, who is a prominent Palestinian community leader in Scotland, was arrested together with nine Irish republicans by the British MI5, the Irish Gardaí, Police Scotland, London’s Metropolitan Police, and over 500 officers of the Police Service of Northern Ireland (PSNI) in the so-called “Operation Arbacia.” We demand the freedom of all political prisoners in Palestine and Ireland, and call upon their supporters to organize solidarity actions.

Dr. Issam Hijjawi Bassalat, who is 62 years old, started his hunger strike on 16 September, as he was again forced into isolation in the filthy and unsafe Foyle House, a wing of Maghaberry prison in the north of Ireland. Irish Republican prisoners immediately engaged in a solidarity hunger strike to support Issam. Earlier that day, Issam’s bail was denied by the magistrate court. He will now proceed to the high court in order to await his trial in freedom.

Dr. Issam Hijjawi Bassalat has multiple health conditions and has undergone an MRI scan this week. It is clear that for any person, let alone those who have health conditions, Foyle House is an unsafe prison. As the Irish Republican Prisoners Welfare Association (IRPWA) noted, “It is widely known that recently an O.D.C. prisoner who was on Foyle House had tested positive for Covid-19. To punitively isolate Issam in Foyle House that is not fit for a human being for a day never mind two weeks is proof yet again of the attitude and mindset of the regime in Maghaberry.”

There is a long history of collective, shared struggle between the Irish and Palestinian national liberation movements. The Irish republican movement confronts British colonialism, which was also the force – through its notorious Balfour declaration as well as the arming of Zionist forces to repress Palestinian uprisings – that nurtured and officially developed Zionist colonization inside occupied Palestine. Similarly, both movements face harsh repression and infiltration attempts, such as the entrapment scheme in this case. Today, Irish republicans and others arrested on political charges by the British state are routinely remanded before trial rather than released and held in isolation, despite the weakness of the charges against them. In some cases, Irish republican detainees are remanded based on the word of a British police officer alone.

Samidoun Palestinian Prisoner Solidarity Network supports the hunger strike of Dr. Issam Hijjawi Bassalat and the Irish Republican prisoners. We call for their immediate release and demand that they are able to await their court case in freedom, and we call for the dropping of these unjust charges resulting from an entrapment scheme. We urge all supporters of Palestine to join us and organize solidarity actions.

Read our original statement on the repression and arrests targeting Irish and Palestinian activists (28 August): in English and in Spanish

Below, we are republishing two statements by the Irish Republican Prisoners Welfare Association (IRPWA), issued on 16 and 17 September.

“The Irish Republican Prisoners Welfare Association are glad to report that Dr Issam Hijjawi has finally been taken to an outside hospital for his long awaited MRI scan.

This was first highlighted by the IRPWA on the 13th of September; a scenario that was not called for if the Maghaberry regime had of acted with the due care that it officially holds.

However, the IRPWA are gravely concerned as to the medieval behaviour of the Maghaberry regime towards Issam on his return.

They have forcefully and punitvely isolated Issam for another two weeks on the filthy and dilapidated conditions that exist on Foyle House.

Issam, who has multiple health conditions, has insisted that if this happened he will embark on a hungerstrike. We feel that to put Issam in isolation is being vindictive and a continuation of the concerted, petty targeting that he has endured since entering Maghaberry.

The Republican Prisoners in Maghaberry Roe House and Portlaoise E3/E4 will support Issam in this stance by engaging in a solidarity hungerstrike alongside him.

It is the prisoners and the IRPWA’s belief that this could and should have be averted if the Maghaberry regime applied logic and common sense. There is room on Roe House to safely isolate Issam until the results of a Covid-19 test is complete.

It is widely known that recently an O. D. C prisoner who was on Foyle House had tested positive for Covid-19. To punitively isolate Issam in Foyle House that is not fit for a human being for a day never mind two weeks is proof yet again of the attitude and mindset of the regime in Maghaberry.

The IRPWA urgently call on the Maghaberry regime to step back from confrontation and apply common sense by transferring Issam to Roe House where his needs can be safely and humanely cared for.”

“The Irish Republican Prisoners Welfare Association wish to expose the deviousness of the Maghaberry regime today as they hatefully and intentionally sent the prisoners tuck shop on to the landing in the full knowledge that all Republican Prisoners in Roe House are currently on hungerstrike.

This was immediately refused by the prisoners and was sent back.

Despite this sinister act, the prisoners in Roe House are in good spirits and are clear that this latest confrontation instigated by the MI5 run Maghaberry administration is easily rectified.

Following the release of a statement announcing the beginning of the current hungerstrike, no media outlet which had been contacted by IRPWA representatives carried this.

The fact that Irish men are hungering for dignity in a British gaol is not newsworthy makes a clear case that there is a complete blanket media ban locally and nationally.

The media would rather publish bile; the Republican family are not fooled.

Victory to the Republican Prisoners!”

We also republish below a collective statement in support of the Saoradh 9 and Issam Hijjawi Bassalat. Add your signature at: https://bit.ly/saoradhsolidarity

As anti-imperialist and anti-colonial activists, organizers, and as committed internationalists, we condemn “Operation Arbacia,” the British Crown’s recent campaign of intimidation and repression against Irish Republicans and their Palestinian comrade and their rightful political work against the imperialist occupations of both Ireland and Palestine. We furthermore reject the campaign’s clear attempt to threaten international solidarity activism, in particular the well established historic bonds between the Irish and Palestinian people.

Last week, the British MI5, the Irish Gardaí, Police Scotland, London’s Metropolitan Police, and over 500 officers of the Police Service of Northern Ireland (PSNI) carried out a series of raids and searches in the North of Ireland, the 26 County Republic of Ireland, and Scotland. Their primary target was the republican political party Saoradh, whose offices were raided in Belfast, Dungannon, Newry, and Derry. Since then, ten people have been detained and charged, including members of Saoradh and a Palestinian man, Dr. Issam Hijjawi.

A few details of this case stand out. First, PSNI coordination with the MI5 shows as clearly as ever that the PSNI serves as a proxy of the British Crown in the North of Ireland. Second, the Irish government is playing a neocolonial role on behalf of British imperialism by assisting with its repression against those committed to an independent and united Ireland. And third, the targeting of Dr. Hijjawi highlights the importance and effectiveness of Irish-Palestinian solidarity as mutual support by two peoples then and now subject to the violence of British imperialism. Hijjawi is after all a native of Palestine in Scotland and an overall outspoken supporter of the Palestinian cause.

In fact, Dr. Hijjawi’s speeches at Saoradh’s meetings, on which the British base their dubious “terrorism”-related charges, brought attention to the very parallels between the Irish and Palestinian causes that his arrest brings now brings to the fore. In one of those talks, Hijjawi spoke of earlier occasions when he’d been visited by MI5, noting that the intelligence officers mentioned “what they called my Irish connection, ironically admitting the parallel between the Palestinian and Irish causes.” He added: “Comrades, be assured that we are on the right side of history, whether in Palestine or Ireland, the nearly century-long struggle for freedom, self-determination, dignity and social justice will prevail, and the imperialist, colonialist powers sooner or later will be defeated, it’s just a matter of time.”

We would also like to note the similarities between the British justification for the detainment of Saoradh members, called “internment by remand,” and the systematic Israeli policy of arbitrary imprisonment of Palestinians known as administrative detention.

A court was told that one of the detainees, David Jordan, stands accused of attempting to develop a relationship with a government “hostile to the UK.” We insist that this accusation, much like the campaign of surveillance and arrests that produced it, is fundamentally illegitimate. As supporters of Irish unity and independence, we insist that the British crown does not have a right to rule in Ireland and thus has no right to determine Irish activists’ choices of political alliance.

We call for the release of all Irish Republicans currently being held in prison, as well as an end to all house raids, stops and searches, “internment by remand”, and any further attempts to criminalize Irish Republican political movements for Irish unity and independence. We also call for all charges to be dropped against Dr Issam Hijjawi.

Signed on to by the following: