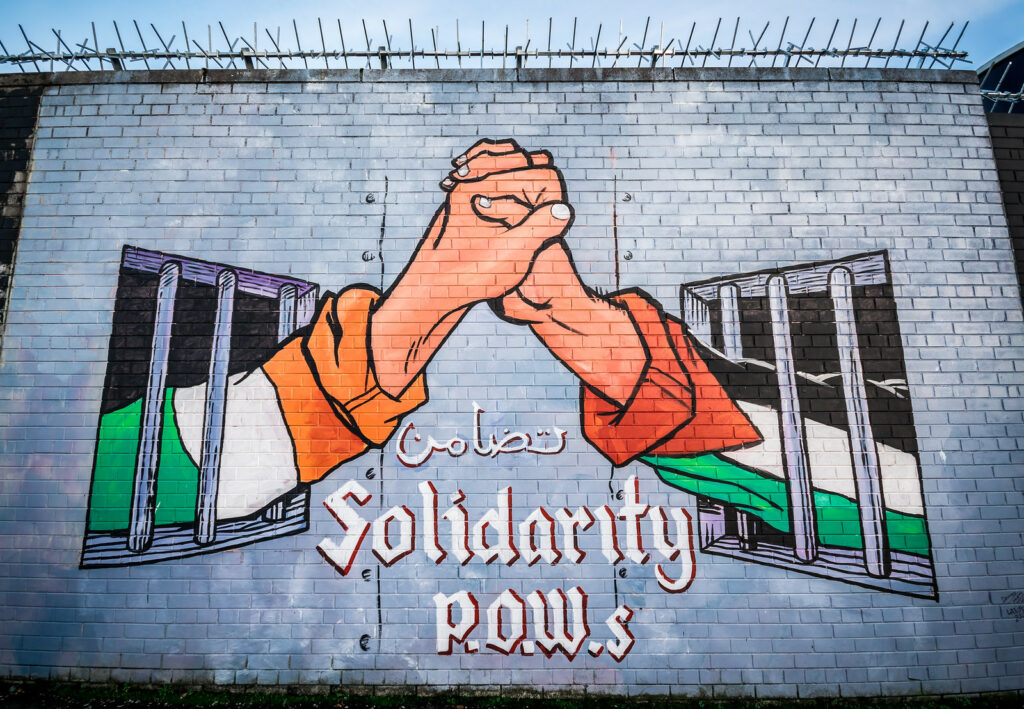 Read this statement in Spanish: https://samidoun.net/2020/08/samidoun-declaracion-de-solidaridad-con-los-republicanos-irlandeses-y-palestinos-detenidos-en-las-carceles-britanicas/

Samidoun Palestinian Prisoner Solidarity Network denounces the recent arrests of nine Irish republicans and one Palestinian by British MI5, the Irish Gardaí, Police Scotland, London’s Metropolitan Police, and over 500 officers of the Police Service of Northern Ireland (PSNI) in the so-called “Operation Arbacia.”

Among them is Palestinian doctor Issam Hijjawi, prominent Palestinian community leader in Scotland, former chair of the Association of Palestinian Communities in Scotland and representative of the Palestinian Democratic Forum in Europe. The Irish republicans are all members of Saoradh, the Irish revolutionary Republican socialist party. We demand the immediate release of all political prisoners held in the north of Ireland, still occupied by British forces.

Join us to take action by signing on to this collective solidarity statement: https://bit.ly/saoradhsolidarity

At this moment, all ten have been charged and remanded into prison, awaiting their trial and held in isolation, a process described by Irish republicans as “internment by remand.”

The policy of internment, officially carried out in northern Ireland from 1971 to 1975, is a similar practice to Israel’s administrative detention of Palestinian political prisoners, allowing the occupying powers to imprison Irish and Palestinian people without charge or trial. Political prisoners have been held for years under these practices, which were introduced in both Ireland and Palestine by British colonialism.

While internment was officially ended, it continues to persist in reality, as highlighted by anti-internment organizers and Irish republicans. Irish republicans and others arrested on political charges are routinely remanded before trial rather than released and held in isolation, despite the weakness of the charges against them. In some cases, Irish republican detainees are remanded based on the word of a British police officer alone.

Nevertheless, Irish republican prisoners continue to struggle and provide ongoing leadership to the movement, much like the role of Palestinian political prisoners in the liberation movement. One of the Irish prisoners, Joe Barr, stated during an interview two years ago, “Whatever the British government plan to do with me and want to do with me it doesn’t matter, it will never ever change what I believe in.”

The arrests appear to have come after a lengthy process of official British infiltration of Saoradh, targeting the political work of Irish republicans for surveillance and entrapment. Infiltrators and agent provocateurs have been used in cases of political repression around the world in an attempt to lure activists into saying or doing anything – no matter how minor – that can be twisted and turned against them, often accompanied by voluminous video and audio recordings.

In this case, it appears that Palestinian organizers were specifically targeted by the infiltration efforts in order to instrumentalize anti-Palestinian racism, criminalization and sensationalist media propaganda against the Irish and Palestinian liberation struggles together.

Dr Issam Hijjawi Bassalat, who was arrested on Saturday 22 August, is a longtime activist for the liberation of Palestine. Born in Palestine, he previously served as chair of the Association of Palestinian Communities in Scotland and represented the Palestinian Democratic Forum in Europe. In court, he noted that he had been “pestered” by the infiltrator, Dennis McFadden, into meeting and going to his home, an attempt to turn the natural solidarity of oppressed peoples and liberation movements into sensational intrigue for police documents and media reports.

In his message to Saoradh’s most recent Ard Fheis, Dr Hijjawi noted some of the repressive tactics he had recently experienced – almost certainly caused by the same series of attacks on the Irish republican movement – before delivering a strong message of anti-colonial solidarity:

“Always, the imperialist powers dealt with the national legitimate aspiration of occupied people from a security perspective, where the Nationalist movement fighting to determine their future and destiny are tarnished as a terrorist movement, this happened all over the world, from the pacifist movement in India — Gandhi — to the armed movement of Nelson Mandela… from the Easter uprising of the Irish people in 1916 to the Palestinian revolution in 1929 and the cold-blooded execution of the leaders of both by the hands of the imperialistic power of the old British empire…

Looking back on the international events during the last 30-40 years, we can see the clear picture: the failure of the Good Friday Agreement, the failure of the Oslo Agreement…and so all agreements which meant to bring a peaceful end to national struggle in different parts of the globe, and more to that, what we are witnessing now in the Middle East and Latin America, where the ordinary people revolting in the streets of Beirut, Baghdad, Algeria, Palestine, Chile, Colombia, Brazil, all these historic events do prove one clear fact: as long as the core issue of national causes are not addressed, people will continue to revolt despite the brutality of the corrupt or colonising regimes.

Comrades, be assured that we are on the right side of history, whether in Palestine or Ireland, the nearly century-long struggle for freedom, self-determination, dignity and social justice will prevail, and the imperialist, colonialist powers sooner or later will be defeated, it’s just a matter of time.”

Saoradh issued a statement on the arrests, stating, “Paid perjurors, manufactured evidence, circumstantial evidence, innuendo and “bad character” insinuations based on long standing involvement in Republican Struggle has resulted in the internment by remand of our comrades.”

They continued: “Saoradh remain steadfast, committed and disciplined in the face of this latest attack on the party. We will not be censored, intimidated, harassed or imprisoned out of existence.”

There is a long history of collective, shared struggle between the Irish and Palestinian national liberation movements. Both directly confronted British colonialism, which was also the force – through its notorious Balfour declaration as well as the arming of Zionist forces to repress Palestinian uprisings – that nurtured and officially developed Zionist colonization inside occupied Palestine. That historical link of struggle has continued over the years, expressed through art, political organizing, mutual support, and the bonds between political prisoners who represent their resistance movements and liberation struggles.

In 1981, Palestinian prisoners issued a statement in support of Irish republican hunger strikers, a document that retains its clarity today:

“We extend our salutes and solidarity with you in the confrontation against the oppressive terrorist rule enforced upon the Irish people by the British ruling elite. We salute the heroic struggle of Bobby Sands and his comrades, for they have sacrificed the most valuable possession of any human being. They gave their lives for freedom… Our people in Palestine and in the Zionist prisons are struggling as your people are struggling against the British monopolies and we will both continue until victory. On behalf of the prisoners of Nafha, we support your struggle and cause of freedom against English domination, against Zionism and against fascism in the world.”

In 2017, Irish republican prisoners in Maghaberry Prison – where the 10 detained republicans are now held – issued a statement of solidarity to Palestinian prisoners on mass hunger strike:

Support for Zionism and attempts to paint the Palestinian people as the aggressors in this conflict are exposed by the inhumane treatment of prisoners by the Zionists. Given the long history of Republican Prisoners and Hunger-Strikes in Ireland, the Palestinian prison struggle resonates particularly with us.”

From Ireland to Palestine, the struggle continues – and the fight for the freedom of all political prisoners is essential to achieving justice and liberation. Samidoun Palestinian Prisoner Solidarity Network expresses its strongest solidarity with the Irish and Palestinian detainees and all Irish republican prisoners.

Samidoun salutes all of the Irish strugglers who have continued to stand side by side with the Palestinian people’s struggle for liberation over many years of collective resistance to colonialism. Freedom for the people of Ireland and Palestine!

Join us to take action by signing on to this collective solidarity statement: https://bit.ly/saoradhsolidarity