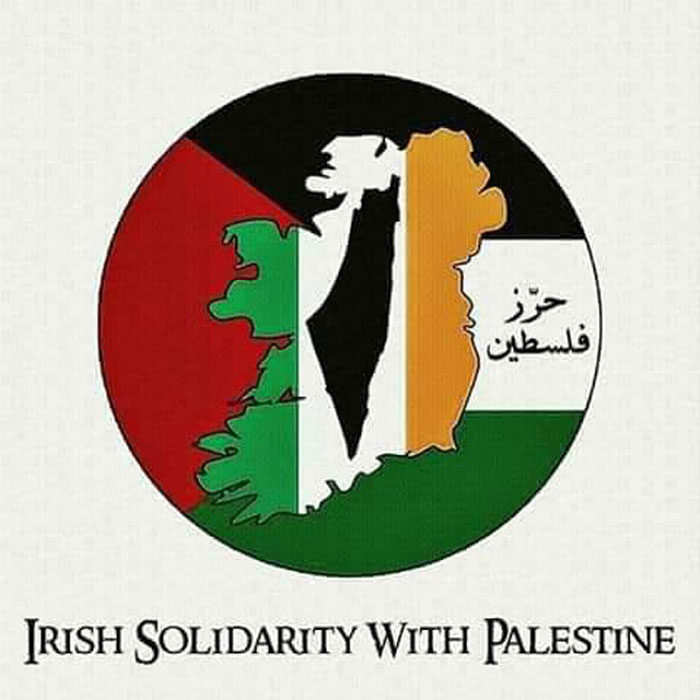 Samidoun Palestinian Prisoner Solidarity Network is honored to republish the following statement from Irish republican prisoners in Maghaberry Jail. Throughout the history of the Irish and Palestinian struggles, these movements have extended their support and solidarity to one another. Nowhere has this solidarity been more poignant than inside Israeli and British colonial jails, as Palestinian and Irish hunger strikers and political prisoners expressed their joint commitment to liberation struggle. The 1981 message from Palestinian prisoners in Nafha to the H-Block strikers continues to powerfully resonate today:

On behalf of the prisoners of Nafha, we support your struggle and cause of freedom against English domination, against Zionism and against fascism in the world.”

Throughout Ireland, numerous events, actions and protests continue to grow and stand in solidarity with Palestinian prisoners on hunger strike in Israeli prisons, organized by a number of Irish organizations including those who organize against internment and imprisonment of Irish strugglers. Boards of solidarity with the striking Palestinian prisoners who launched their strike on 17 April 2017 have been posted around all of Ireland, while the famous International Wall in Belfast is adorned with murals that salute the joint struggle of Irish and Palestinian prisoners for freedom and liberation. As we mark this Nakba Day, we salute the Irish organizers that have ensured that the Palestinian flag is flying today over Dublin City Hall in Ireland’s capital and also over the Sligo County Council Building.

Samidoun Palestinian Prisoner Solidarity Network salutes the Irish republican prisoners and their continuing anti-colonial struggle for freedom. From Ireland to Palestine, we stand together against colonialism, racism and occupation, and for justice, freedom and liberation, for all political prisoners and for all occupied peoples. The Irish prisoners’ statement follows:

STATEMENT OF SOLIDARITY FOR THE PALESTINIAN HUNGER STRIKERS FROM REPUBLICAN PRISONERS

We support the demands of our Palestinian comrades for humane and dignified treatment whilst being held captive by the illegitimate Zionist oppressors.

Support for Zionism and attempts to paint the Palestinian people as the aggressors in this conflict are exposed by the inhumane treatment of prisoners by the Zionists.

Given the long history of Republican Prisoners and Hunger-Strikes in Ireland, the Palestinian prison struggle resonates particularly with us.

Our thoughts are with the hunger strikers at this time, and we send our support to them in the sites of captivity and in their struggle for freedom.