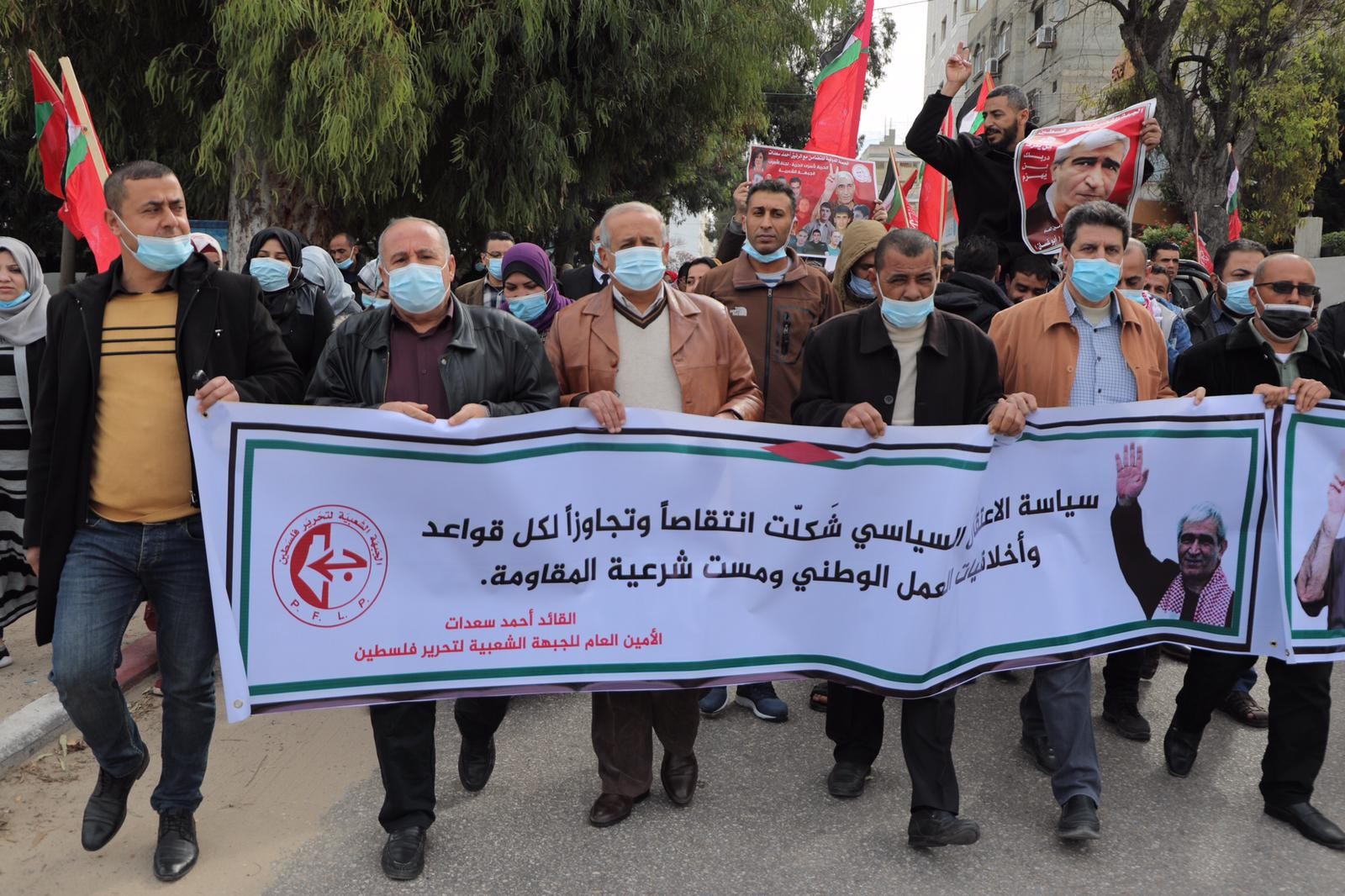 On Sunday, 17 January, hundreds of Palestinians in Gaza rallied outside the International Committee of the Red Cross in Gaza City to demand freedom for Ahmad Sa’adat, the imprisoned General Secretary of the Popular Front for the Liberation of Palestine. The protest, organized by the PFLP, marked the 19th anniversary of the Palestinian Authority security services’ abduction of Ahmad Sa’adat, the under the Oslo accords’ PA “security coordination” with Israel. 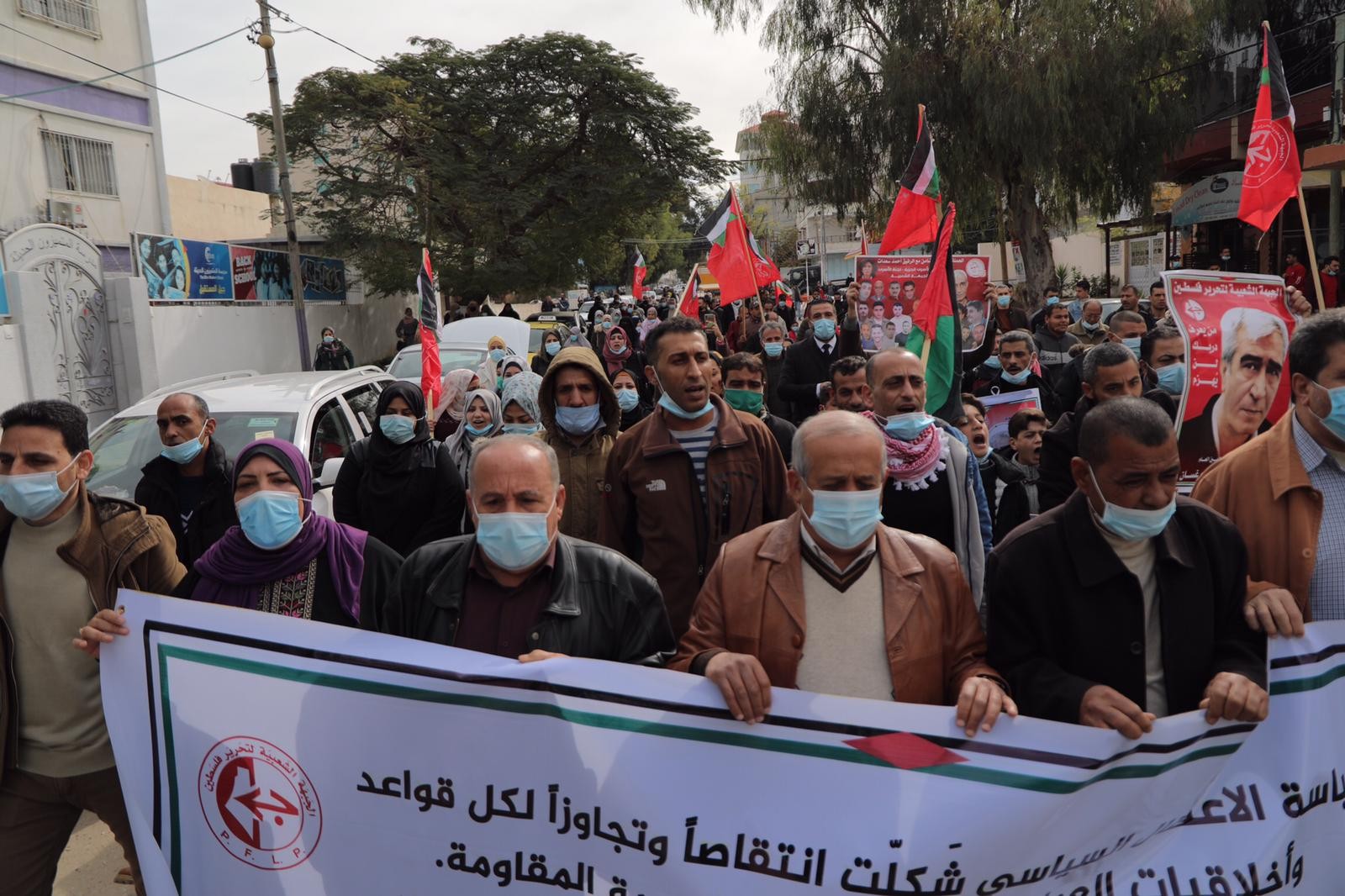 It comes amid the Week of Action to Free Ahmad Sa’adat and all Palestinian Prisoners, a global mobilization for actions and organizing to highlight Sa’adat’s case and the struggle of the Palestinian prisoners’ movement behind bars, advocating for liberation for Sa’adat and his fellow 4,500 Palestinians jailed by the Zionist state. 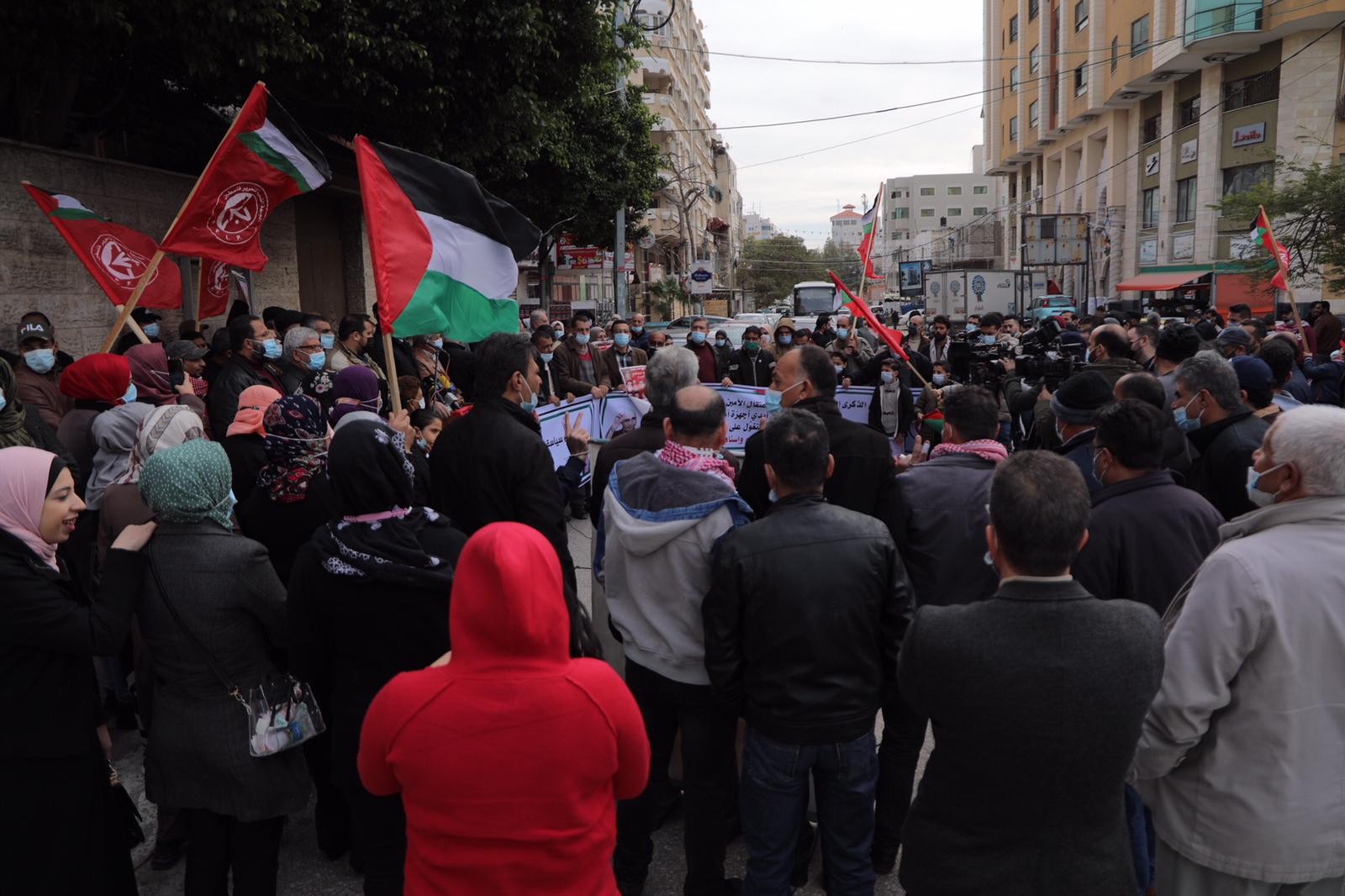 Awad al-Sultan, a member of the PFLP’s Central Committee, spoke at the protest, noting that Sa’adat was then detained with his comrades at the PA presidential compound, the Muqata’, subjected to a hastily arranged and farcical military hearing and then transferred to Jericho prison, where they were detained under U.S. and British guards in an agreement with the Israeli occupation. After four years, on 14 March 2006, occupation forces violently stormed the prison and kidnapped Sa’adat and his comrades. He is currently serving a 30-year sentence imposed by the Israeli military courts, which Sa’adat consistently boycotted throughout his military trial, which was delayed for years. 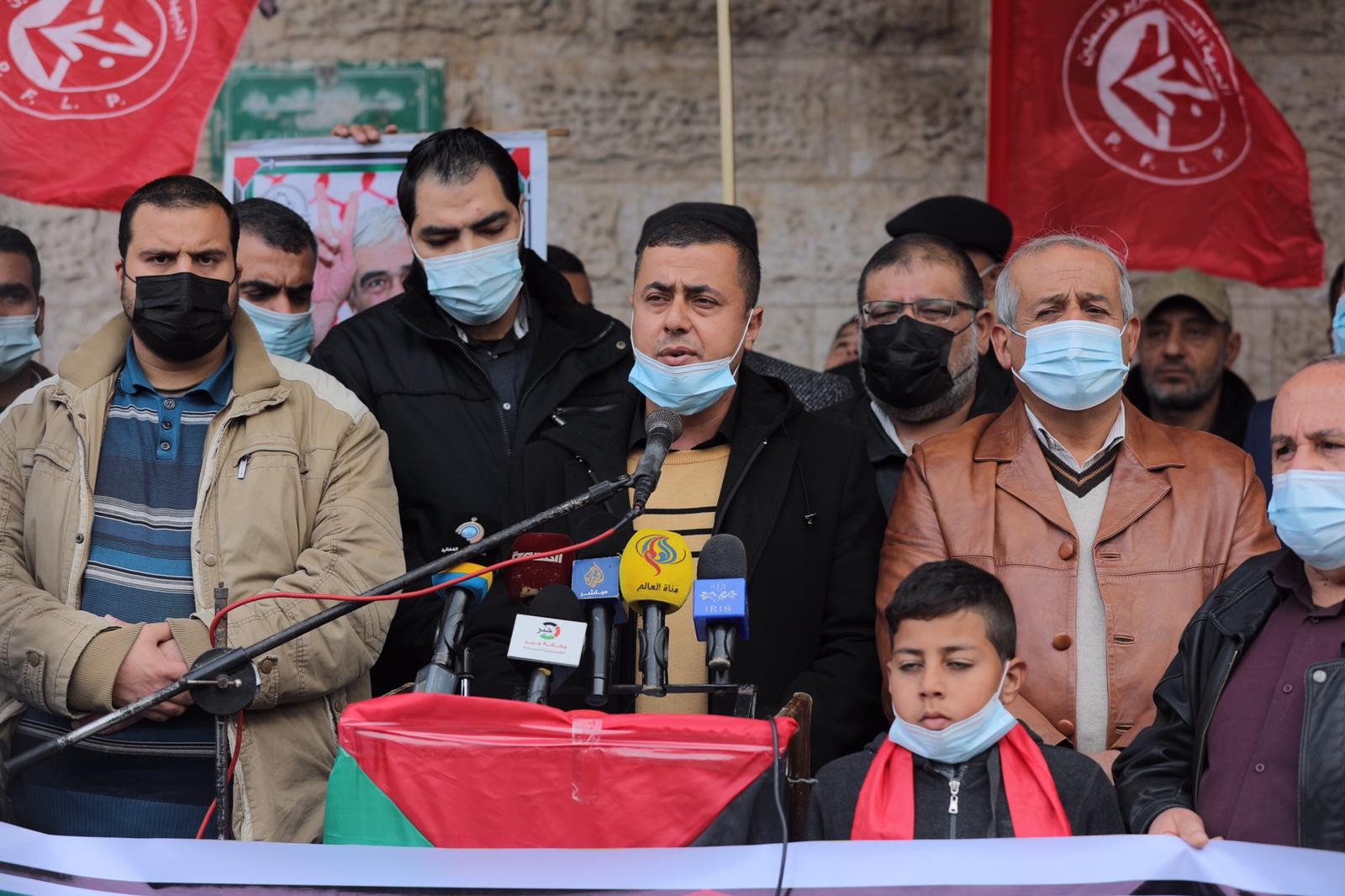 Sa’adat’s abduction by the PA “reflected a clear targeting of the path of resistance represented by the leader Ahmad Sa’adat and his comrades and underlines the importance of confronting the policy of PA political detention and pursuit of resistance fighters and ending the Oslo accords and their political, economic and security obligations. This was a national crime…that has not and will not be forgotten,” Sultan said. He affirmed that it was impossible to reach Palestinian national unity so long as the Oslo accords and security coordination with Israel remain in place.

Palestinians protest in #Gaza demanding the release of Ahmad Saadat, the leader of the Popular Front for the Liberation of #Palestine, who has been in #Israeli detention for 14 years, today. pic.twitter.com/pCU1UTYUZP 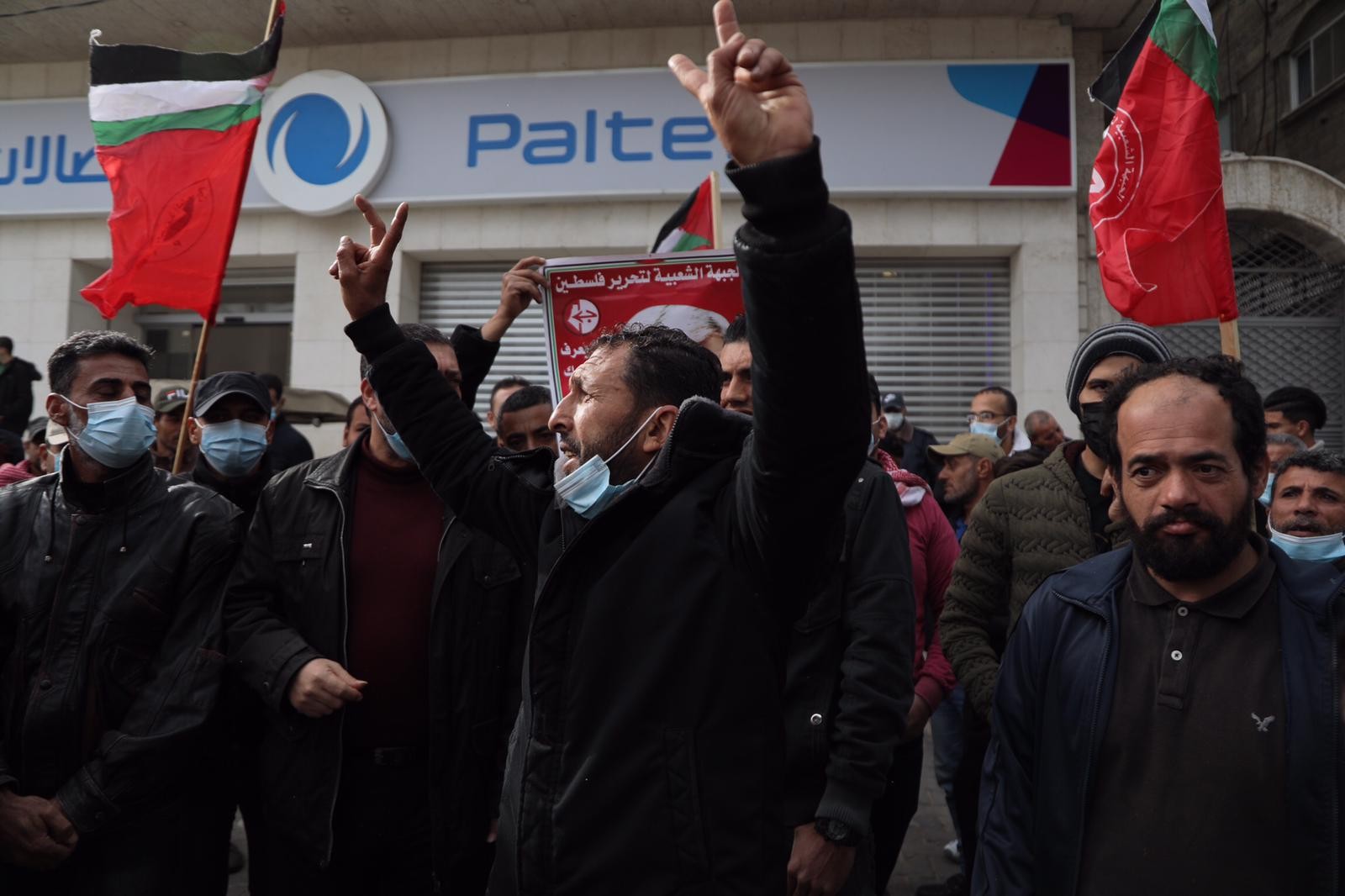 On 15-23 January 2021, join Samidoun Palestinian Prisoner Solidarity Network in a collective call for the freedom of Ahmad Sa’adat and all Palestinian prisoners, with action and global solidarity to escalate the boycott of Israel, end aid and support to Israel, organize for justice in Palestine and resist imperialism and colonialism.

Join these events and actions for the Week of Action to Free Ahmad Sa’adat and send your events to us at samidoun@samidoun.net!