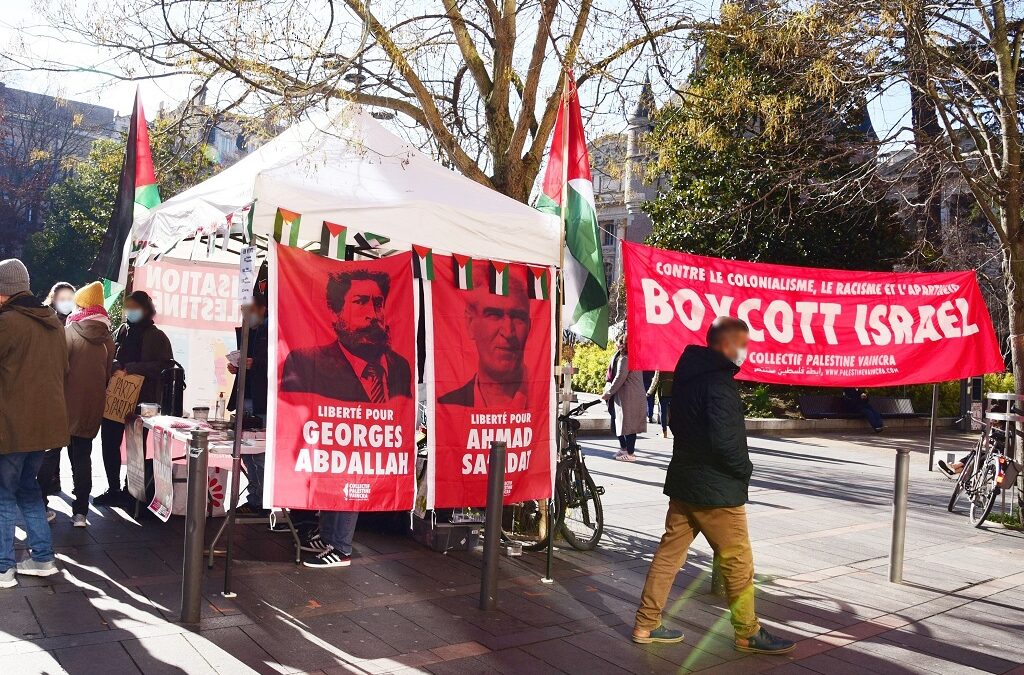 The following report is largely translated from the original French at Collectif Palestine Vaincra:

On Saturday, 16 January 2021, a dozen members and supporters of the Collectif Palestine Vaincra organized a Palestine Stand at the exit of the Capitole metro station in Toulouse, France, calling for freedom for Ahmad Sa’adat, the general secretary of the Popular Front for the Liberation of Palestine, imprisoned in Israeli jails. The event came as part of the International Week of Action to Free Ahmad Sa’adat and all Palestinian prisoners, organized by the Samidoun Palestinian Prisoner Solidarity Network from 15 through 23 January 2021.

Under a bright winter sun, the Palestine Stand was very visible and received a warm welcome from passers-by in the city center of Toulouse. The stand near the metro station exit was decorated with Palestinian flags and various banners, calling for the boycott of Israel, highlighting the history of the colonization of Palestine, and calling for freedom for Ahmad Sa’adat and Georges Ibrahim Abdallah, the Lebanese Arab Communist struggler for Palestine imprisoned in France for over 36 years. 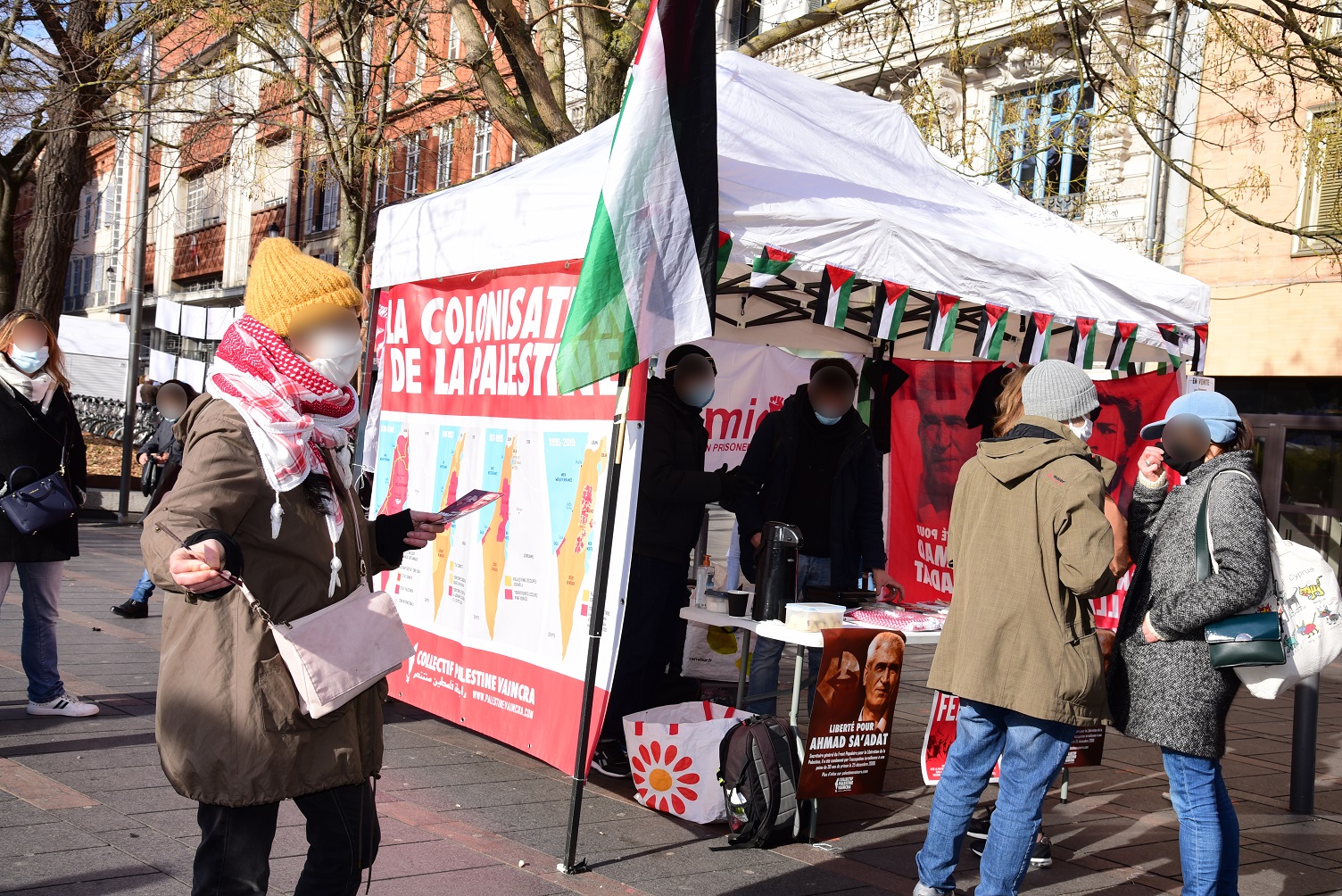 Over more than two hours, participants distributed hundreds of flyers and held rich and lively discussions with many people about the case of Ahmad Sa’adat and the vision and principles he represents. Many passers-by learned more about the imprisonment of over 4,500 Palestinian political prisoners, including 450 jailed without charge or trial under administrative detention and approximately 180 children, by reviewing the mini-exhibition highlighting their conditions and situation in Israeli jails. 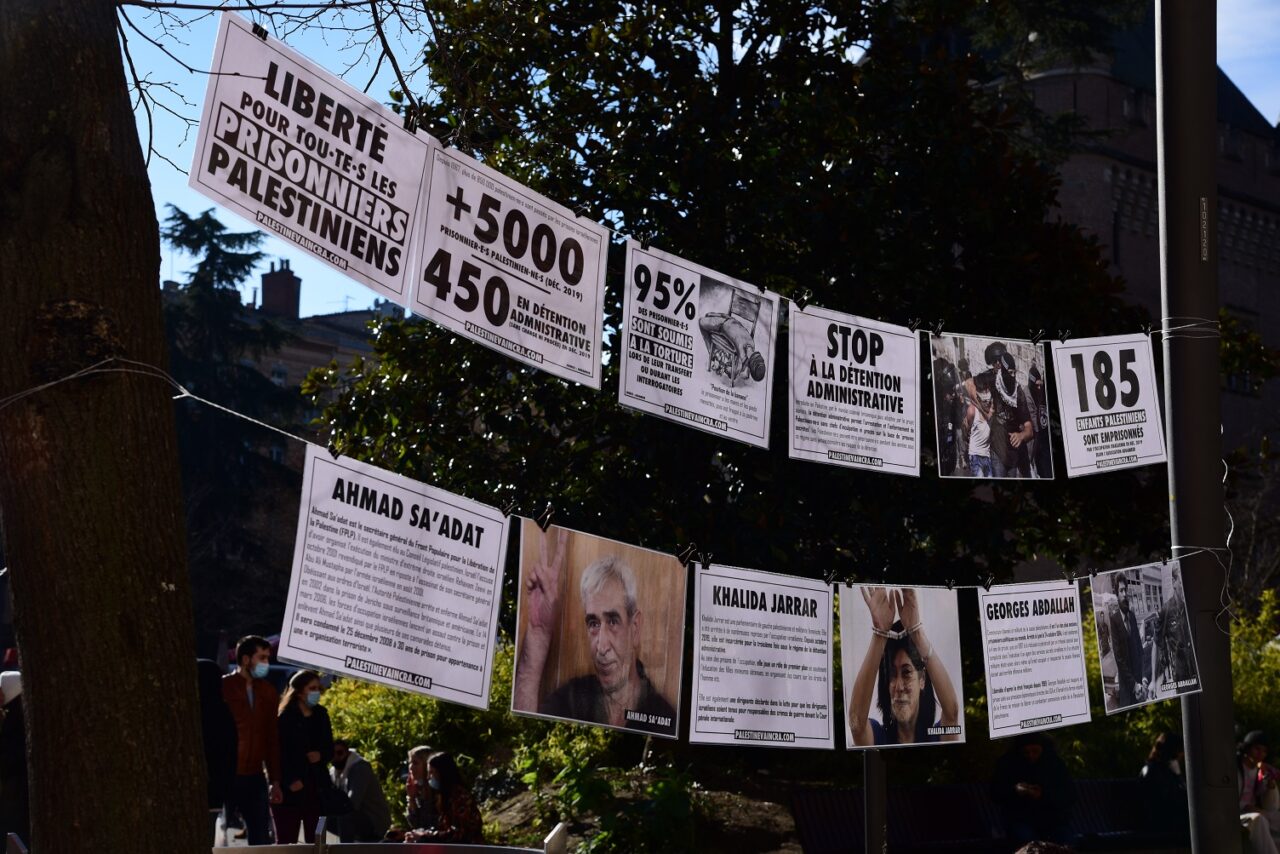 In addition, the organizers distributed many leaflets calling for the boycott of Israeli products, which provide a list of different brands to boycott in supermarkets for those who do not wish to financially support Israeli apartheid and its crimes. Many people provided words of encouragement, urging the organizers to continue their efforts to support the Palestinian people. Several representatives of different groups came to participate in the stand, including members of the Popular Front of Turkey and the Friends of Palestine Against Imperialism and Zionism. 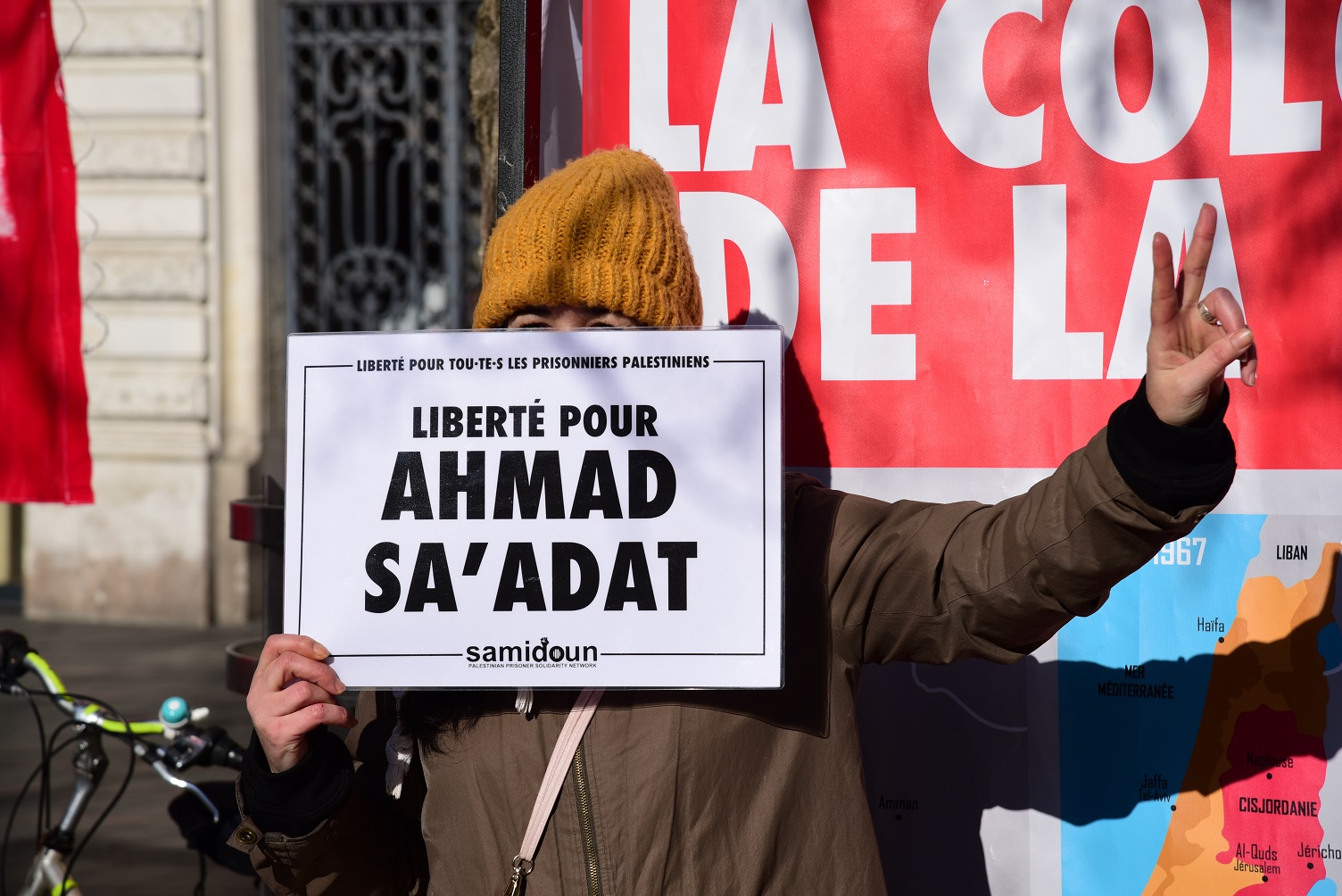 Dozens of people joined in the solidarity campaign by taking photos calling for the liberation of Ahmad Sa’adat and all Palestinian prisoners:

The stand came to a conclusion with a group photo of solidarity to affirm support for various campaigns for Palestine facing attacks, defamation and attempted criminalization from the pro-Israel far right, including the Anti Zionism is Not Antisemitism campaign in Italy, Palästina Antikolonial in Munster, Germany, and the French Jewish Union for Peace. We will not give in — instead, we will build solidarity with the Palestinian people and their legitimate resistance against colonialism! 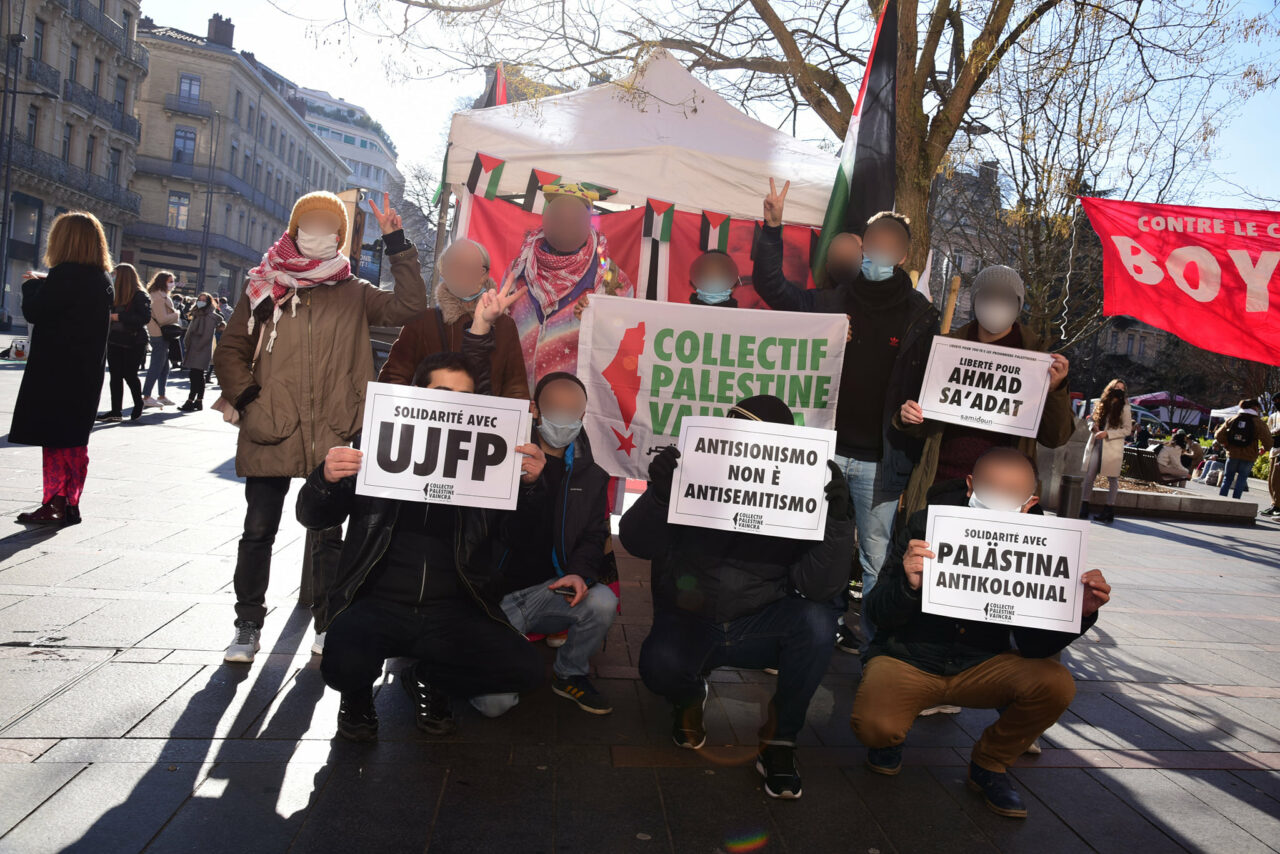 Collectif Palestine Vaincra invites interested people to contact them to get involved in future activities in Toulouse. Palestine will win! 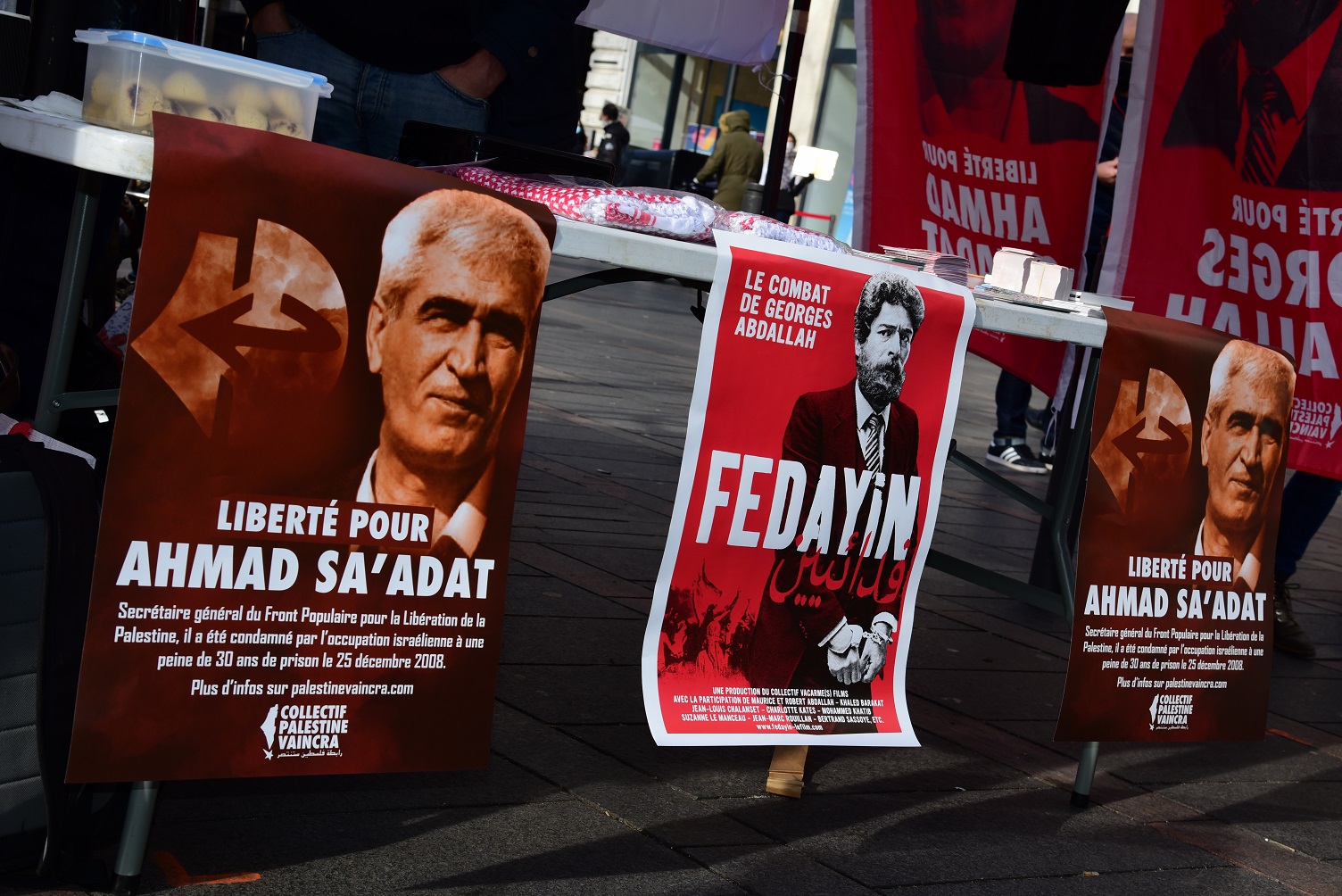