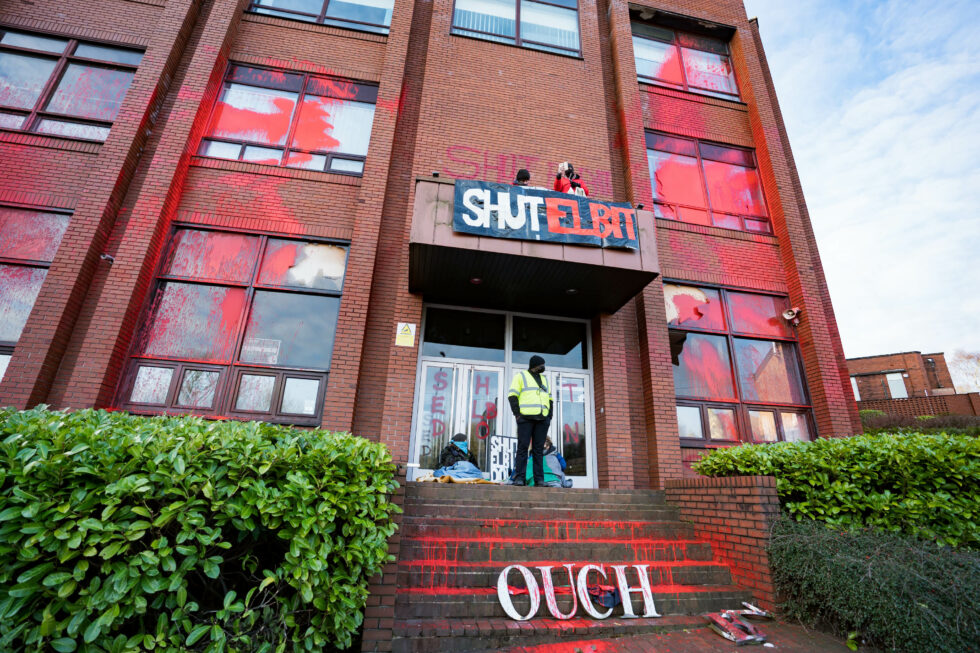 Please see this report in French at Collectif Palestine Vaincra, and the Palestine Action statement.

On Monday February 1, activists from Palestine Action and Extinction Rebellion blocked the entrance to an Elbit Ferranti arms factory in Oldham, Greater Manchester, UK. The various activists covered the building with red paint, smashed several windows and chained themselves to the gates using chains and padlocks. In addition, they deployed numerous #ShutElbitDown banners demanding the closure of 10 sites, including four arms factories, in Great Britain.

For several months, they have been mobilizing against Elbit Systems, an Israeli arms company which markets its weapons after having tested them on Palestinian civilians. The move comes weeks after the British government announced a new £ 100million contract with the Israeli company to supply cutting-edge technology to the military. In a statement , Palestine Action said: “Evidence of Israel’s war crimes, aided by Elbit’s deadly weaponry, has done nothing to stop the British Government from prioritising profits over people and the planet. The change must come from the people, to uphold human rights where our ‘leaders’ refuse to do so.”

As a result of this important action, at least 6 people were arrested by the British police who are deploying a significant repressive arsenal to try to silence this important campaign of direct action and civil disobedience against Israeli criminals and their British allies. . But the activists are determined to continue their mobilization and they are assured of all our solidarity: #ShutElbitDown!

6 arrests so far | Activists from @Rebellion_North stick it out on the porch roof & are resisting Elbit's death factory until the very end #ShutElbitDown pic.twitter.com/RCbIZJjtv8